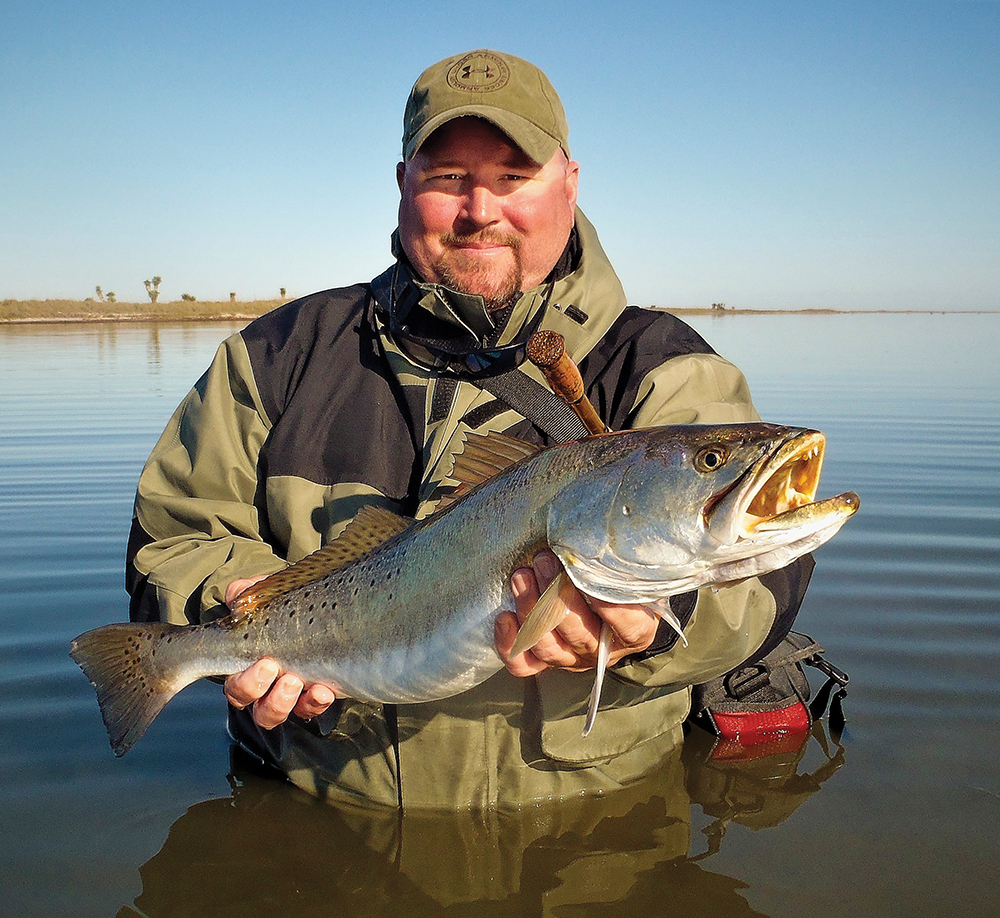 Chuck Holloway with another fine specimen caught in January with the captain.

Most people achieve mastery of complex endeavors through implementation of two synergistic processes--self-discovery and observation. Deep, reflective self-analysis provides a foundation for excellence, but mastering any avocation or profession while operating in a metaphorical bubble, without mimicking others, seems unlikely, even impossible. Most people who fish actively borrow sound concepts and productive practices from each other. This enhances the efforts of all anglers, regardless of methods or species targeted; it means most to those devoted exclusively to using artificial lures.

I learned much from several exceptional anglers, all of whom helped me forge the set of principles by which I operate. These people could not be described accurately as “old salts”, at least not during the time-frame in which they most profoundly influenced me. Their ages would decry the use of the label.

Without exception, these young, competitive, analytical, highly-motivated individuals displayed type-A personalities and abundant energy.  I can consolidate the most valuable things they taught me into three categories, ones which serve as the foundation for excellence not only in the sport of fishing, but also in many other activities. My unintentional mentors urged me to aspire to a mindful state, to constantly evolve and to display perseverance.

In the world of fishing, operating with a dull mind inhibits productivity, while increasing risks and dangers. Operating with an active, focused mind does the opposite. Aspiring to a mindful state involves conscious decisions made before, during, and after all outings.

The first step in this process demands actively planning each and every trip, taking into account any and all variables which might impact productivity and safety. Initially, this means checking weather forecasts and tide charts and considering the impacts these things will likely exert on the general area chosen for the outing. Further development of the float plan usually requires consulting fishing logs and/or memory, to come up with specific spots which have produced on prior days during the same season, with similar weather and celestial elements in play.

Depending on the purpose(s) of the outing, aspiring to a mindful state before departure might also include contemplation of areas of weakness, and ways to eliminate them. For instance, tournament anglers working to learn more about a body of water for an upcoming event might consciously plan to visit far-flung areas they know little about. In contrast, a weekend warrior hoping to help an older relative catch a few fish for an evening meal would likely spend time trying to devise a scheme to improve the odds of catching quickly after enjoying the comforts of a short boat-ride. In either case, cranking up the gray matter before cranking up the outboard improves the odds of fishing with an active mind while on the water.

Mindful activity carries the most weight during the hours of an outing. Fishing in a mindful state requires consciously and constantly evaluating all relevant elements which can be controlled. Mindful captains approach specific places and target their fish in calculated ways.  After arriving at some place with predicted high potential for productivity, they open their doors of perception and observe their surroundings, looking and listening not so much for specific things, but attempting to perceive every meaningful thing.

Then they decide how best to target the fish they suspect lie within the scope of their influence. Rather than just throwing whatever's tied onto the end of the line from the last outing, a mindful angler makes a conscious decision to deploy some specific lure because it makes the most sense, given the details of the situation.

Once they make a choice about what to throw, anglers in the proper mindset begin to experiment with presentation, again acknowledging the environmental elements in play at the time and place, attempting to identify movement patterns which produce strikes most consistently. If early choices produce at an acceptable rate, these alert anglers work to maximize productivity; if and when things don't play out as planned, they make more meaningful adjustments to lure choice, presentation, or aspects of the location they've chosen. Eventually, alert anglers usually identify predictable dilemmas related to sticking with the plans they originally made or altering them to meet the perceived needs presented by the vagaries of the moment.

In all cases, the most astute anglers pause to reflect on what they've done after they finish an outing, ideally recording details in some form of a log. Many bounce ideas off partners during this analytical phase, considering the experiences of others and cross-referencing them with their own, with the goal of generating solid conclusions about what worked and what didn't.  The ultimate aim of post-outing analysis involves identifying strengths and building them into future plans, while pinpointing mistakes to eliminate.

This leads to the second important element of excellence, the need to evolve. All aspects of human life dictate this need. In fact, a person will either evolve or regress, whether attempting to or not, since change is a permanent element of our existence. Sand flows through the glass, waves caress the beach, the tide rolls in and out, and people change. In order to change in productive ways, or evolve, instead of regressing, people must fight one of the most powerful and universal components of human behavior, the tendency to resist change.

The strength of the survival instinct dictates a basic inclination to resist change. An individual who feels happy and well does not want things to change. In its ideal form, resistance to change creates a sturdy foundation for many positive behaviors. For instance, it allows people to rely on practices and behaviors which generate productive results.

In its most negative form, resistance to change inhibits growth and causes one to become inflexible and stubborn, like a one-trick pony. For an angler, resisting change too strongly leads to plateaus in skills and levels of productivity. The most accomplished fisherpeople recognize the need to constantly evolve, so they regularly strive to learn new things. They open their minds to trying new places, lures, presentations and general strategies, with the ultimate goal of enhancing their versatility.

More versatile anglers generally outperform more limited ones, in the end. The most flexible and creative captains add data to their GPS units to improve their catalogs of spots and tweak elements of their processes consistently and thoughtfully. All the while, they do so without behaving in random ways, in order to avoid wasting time and effort. Evolving anglers realize the inherent danger of excessive experimentation and fear throwing out the baby with the bath water, so they rely on tested, productive practices and strategies, while acknowledging that any good plan or process can likely be improved if tweaked the right way.

While attempting to evolve, top anglers recognize and deploy the third element in the triad of excellence, the quality of perseverance. Patience is a virtue in many endeavors, certainly patience plays a key role in angling excellence. In order to discover and repeat many successful angling skills and practices, one must execute persistent efforts. To persevere is to overcome the tendency toward haste.

Folks who spend too much time running around at the helm of the boat with the breeze tickling their cheeks, in search of some angling Shangri-La, won't likely compete well with those who display more commitment to the choices they make about where to stop, stand and fight. Similarly, people who spend too much time searching through the tackle box for a magic lure will likely reel in fewer fish than those who display patience and creativity while giving appropriately selected plugs ample time to produce. Angling excellence requires balancing two contradictory needs, the first related to identifying and relying on places, practices and lures which produce, the other on the need to learn new places, practices and lures which will produce as well or better than the ones already known.

Paying proper homage to the concept of perseverance involves understanding when conditions provide high potential for evolution and when they dictate the need for relying on the known. Sometimes, persevering means sticking with a lure or presentation when its production rate is low; at other times, persevering means standing and casting at a proven, productive spot while experimenting with lure choice because moving will almost certainly take low chances for success right down to zero. In other contexts, showing perseverance might mean continuing to search for just the right spot for the conditions, running through a relatively long list of candidates, when conditions allow for doing so. In still other circumstances, it might involve continuing to employ a specific pace of movement, despite experiencing poor results for a while.

In the best-case scenarios, a mindful angler understands when to persist and when to abandon well-made plans.  No angler gets these things right every time.  The most productive work from an active mindset which enhances their chances and helps them evolve, so they can persevere with the best choices an optimal percentage of the time.