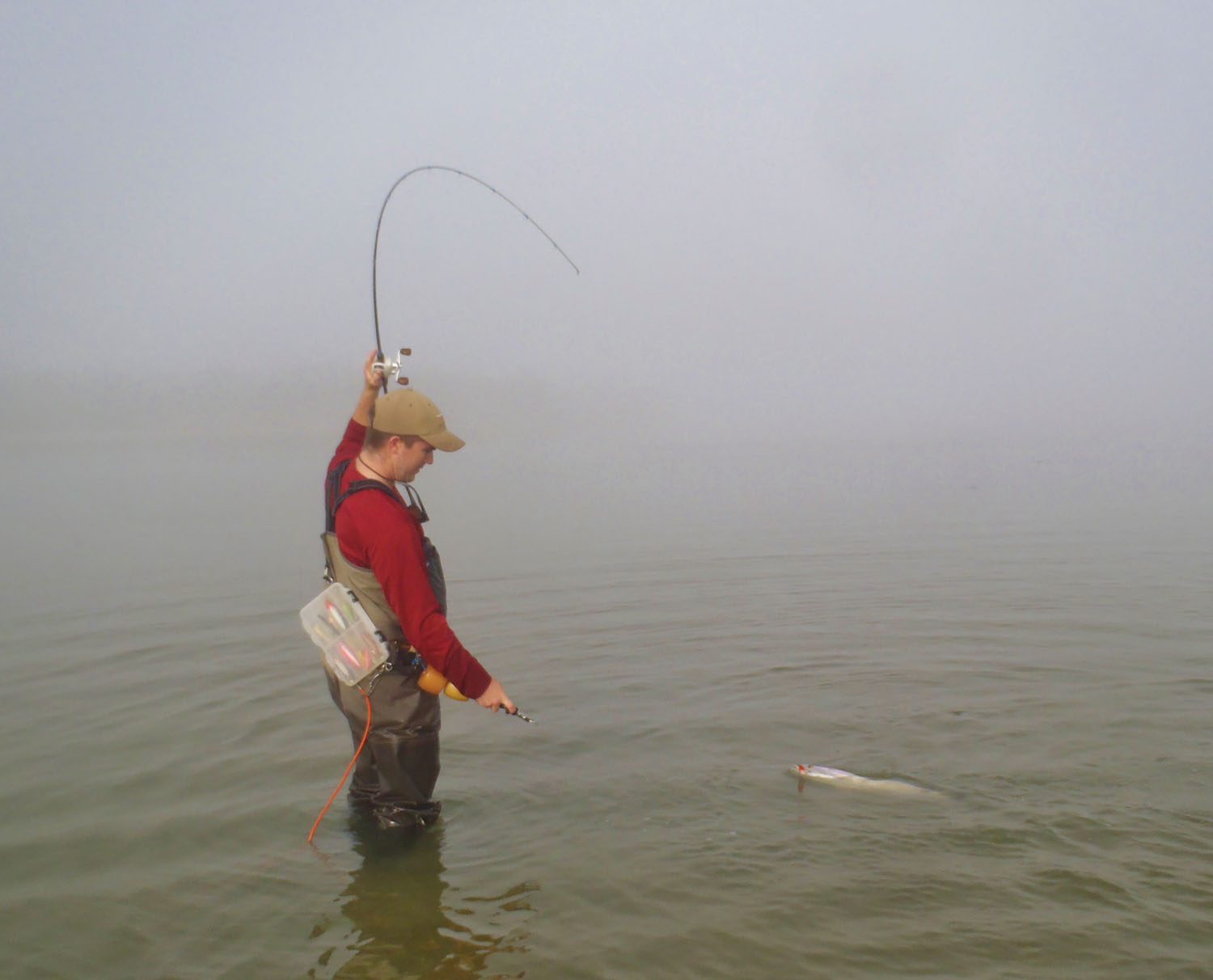 During a hot run on a consistently productive spot, Matt Mauger caught a dozen trout in the four to five-pound class on topwaters and twitch baits.

While playing golf in the years of my youth, I learned a valuable lesson about freakish, crazy-good events which I will not repeat. These unique occurrences bear scant significance in the long run; useless as benchmarks, they set the bar well out of reach. I can recall several specific shots I hit in my career which fit this description.

While attending the University of Texas, I worked summers at the Woodlands Inn and Country Club, playing as much golf as I could. One steamy afternoon, I joined two teens for a round on the North Course. The pair ranked first and second on a good high school girls' team; they regularly broke 80. Boys being boys, I wanted to impress the two cuties with my prowess and skills.

Since they played from the front tees, I moved up from the tips, where I usually teed off, and this changed the nature of the first hole. The dog-leg par five normally requiring a tee shot played to the right of a bunker guarding the left side of the fairway became potentially much shorter, if the bunker could be cleared in the air off the tee. I realized this as I stood over my ball, making ready to begin play.

In those days, I disdained the use of a tee with my persimmon driver, preferring to make a small divot with it and place the ball on the fluffed-up turf at the front of the depression. A purist at heart, I thought this allowed me to make more consistent swings with all the clubs, and I had been driving the ball powerfully and accurately. On this particular occasion, I lined up the shot straight at the fairway bunker, hoping to clear the sand and reach the garden spot beyond.

Then I hit a shot I could never hope to repeat, a screaming, low laser exactly where I'd aimed; my ball easily carried the trap and hit the ground running on the other side. I found it in the middle of the fairway, a full 345 yards from the tee! In those days, with woods made of wood and balls made of rubber bands, it was a prodigious clout indeed. I needed just a seven iron to reach the green on my second shot. Adrenaline, special circumstances and a precisely powerful swing combined to create the perfect context for a once in a lifetime drive.

These kinds of things happened to me sporadically throughout my career on the links. After college, I worked as assistant pro at Deerwood Club in Kingwood. Once, while hitting 6-irons on the practice tee, I struck another immaculately worthless shot. Prior to making the swing, I imagined a string attached to my spine, with a weight dangling from it, just above the ground. I tried to make a complete swing without causing the fantasy pendulum to touch the turf, or lift farther from it. In other words, I worked to keep my spine angle entirely consistent throughout the process.

I'd hit perhaps a dozen shots with the 6-iron, all of which landed near a hill adorned with a flag approximately 175 yards from me. Then, I made the flawless swing. The resulting shot carried the ball a full 50 yards beyond where the others lay. At the moment of impact, I knew what I'd done. Predictably, I could not repeat the scene. Most importantly, expecting to hit a 6-iron 225 yards in those days would have set me up for consistent failure. My "stock" shot, one made with normal effort and resulting in solid contact, went 175 yards. Success in the game partly results from distance control and precise planning. Using freak shots as the basis for planning sabotages consistency.

Unless, of course, circumstances conspire to eliminate all possibilities except a heroic gamble. I recall just such a situation, which occurred on a tight par five at Deerwood, one where I regularly struggled to hit the fairway off the tee. On this occasion, I'd driven into the trees right of the short grass, my ball coming to rest in thick rough surrounded by towering pines. Pitching back to the fairway would have been difficult, given the specific position of the ball relative to the trees and the fact the narrow, sloping fairway wouldn't likely hold a shot struck from such thick grass.

I looked long and hard and eventually high for a route to escape the snare into which I'd sent myself. I realized I had one chance, and one chance only. If I could hit the ball straight up into the air with a 5-iron, using the moisture on the blades of grass as an aid, I might be able to sling a "flier" skyward, over the tall tips of the evergreens, and carry the ball near the raised putting surface, which lay a full 250 yards away. Though the outcome seemed unlikely, I could find no other reasonable way out of the jam, so I lined up the shot and took a mighty rip.

To my utter amazement and sheer joy, the ball rocketed straight up, like a missile, clearing the verdant needles and disappearing into the gray mists above them. I turned my attention then to the target, which I could see through the vertical trunks of the pines. An improbably long time later, I saw the ball drop onto the front edge of the green and bounce toward the pin. Incredibly, my Titleist stopped mere feet from the hole, leaving me a good chance for an eagle.

I could have tried to execute the shot a million more times and never created a better outcome. Truly, the height, length and accuracy of the blow combined to create a fluke, one which I could never expect to repeat. Sometimes, circumstances combine forces with confidence to create an unforgettable, desired outcome, one which does not lend itself to repetition. This rings true on the water as well as on the links.

In a way, the events I experience while fishing differ significantly from the ones on the golf course. Mostly, golf's grand moments result from perfectly executed shots. In fishing, a purely analogous situation would relate to casting a lure. Sometimes, a cast comes off ideally, sending the plug much farther from the rod tip than normal, causing it to land in a distant, distinctly fishy place. But the unusual angling events I'm referring to here relate to the "situation" or "circumstance", not to the physical act of casting.

While fishing, we sometimes encounter ephemeral situations which render some places temporarily perfect for catching the fish we target. The fleeting nature of the environmental variables in play ensure the situation will likely not repeat itself. Recognizing the temporal qualities inherent to these situations prevents us from chasing after illusory dreams, trying to make them repeat.

Tide levels, tidal movements, extreme weather conditions and other related types of events can create scenarios which provide ripe opportunity for a once in a lifetime catch, but won't provide potential on a consistent basis. A historically bad flood which occurred in the autumn of 1998 did just that for me. Massive volumes of cold freshwater poured down the Guadalupe River into San Antonio Bay, pushing the tide a full three feet above normal, forcing the saltwater onto Matagorda Island, where it reached the back side of the dunes fronting the beach.

The trout and redfish retreated to this narrow strip of favorable water, and when tides returned to a more normal level, the predators became effectively trapped in the backwater lakes on the island side of the bay. People did not figure this out, since most of San Antonio Bay looked like a red river, so I had the place all to myself during the first Troutmasters' Classic event. I caught a 7.09-pound trout in one of the Twin Lakes, claiming the prize for big fish, and nearly won the stringer portion too. I fished the place several times before that tournament and many after, but never came close to catching a trout of those dimensions again. The flood likely forced extra fish into the place, including some big ones.

I watched a similar scenario unfold in Baffin Bay a few years later. Again, weather events helped elevate the potential of a mediocre fishing spot. In this case, cold northeast winds had pushed the tide up and in for several days. When those brisk breezes died on the memorable morning, the abnormally high tide naturally began to retreat toward a lower level. This caused water on a tidal flat to rush through a narrow slot in the shoreline, back into the body of the main bay. Visible for quite a distance, the ripple at the mouth of the slough lay at the edge of a bountiful school of mullet. Giant trout found their way to the grass beds on either side of the drain, lying in wait to ambush their prey.

I and two others caught nearly two dozen big specks once we wandered into the scene, casting our Fat Boys into the shallows around the dark grass beds and pulling them with the flow coming out of the lake. Several times, we watched giant sows shoot forward, off the dark bottom and snatch our wobbling plugs, revealing flashes of yolk yellow in their mouths as they attempted to dine in the crystal clear current.

One of those trout weighed ten pounds. Four others weighed over eight. At the end of the session, when we could no longer make a fish strike, I walked right up to the sweet spot and spotted a fish of truly epic dimensions lying where we'd made hundreds of casts. Though I've seen current coming out of that lake a few times, never with such amplitude and velocity, I have caught just a handful of quality trout there since. I now recognize the events for what they were, a freakish fluke.

Whether standing in shallow water casting at fish, or addressing shots on the rolling hills, fairways and greens, anglers and golfers benefit from recognizing the futility of attempting to make some kinds of events repeat. In both endeavors, hedging the bet in favor of things which reliably repeat creates a foundation for consistency. In order to increase the odds of success, anglers and golfers must resist the temptation to try things which have relatively low probability of producing desired results consistently.

Recently, a customer told me he caught his personal-best trout on his daughter's "Snoopy Pole", after she lost interest in waiting for a bite and began frolicking in the calm water along the beach. Any sensible person would recognize the luck involved in such a catch and the futility of basing future fishing decisions on the chance it might repeat. Other situations, even ones with the same low level of reliability, prove much more difficult to judge, showing more potential to beguile any angler who fails to discern their fruitless beauty.

Keeping accurate records and identifying places and patterns which demonstrate consistency provide the best ways to avoid the pitfalls which accompany attempting to repeatedly catch fish in places where one freakish event played out, due to extenuating and temporary circumstances. Wise captains stay prepared to recognize situations which provide fleeting, fantastic opportunity, but base most of their decisions on proven sites and strategies. They don't try too hard to relive beautifully useless events, nor search for Mermaids in a Sea of Serendipity.