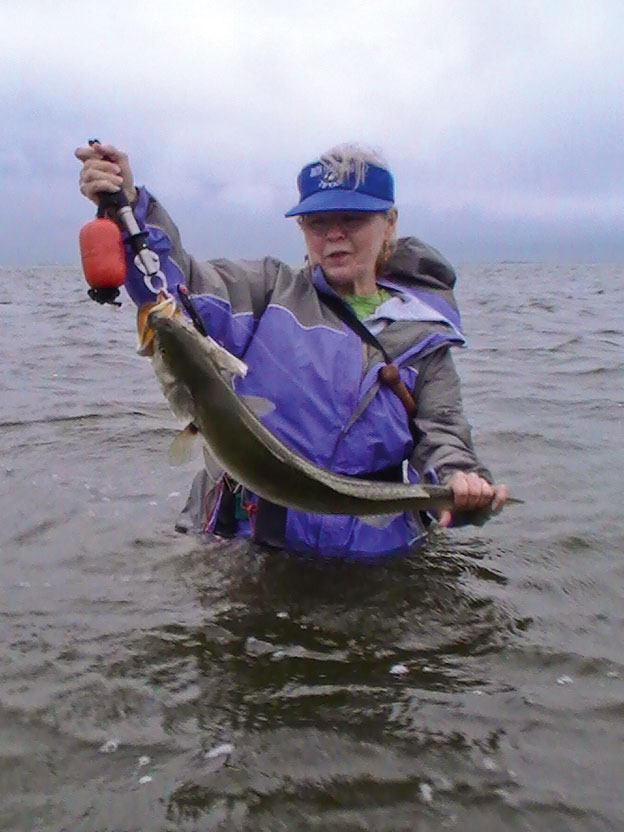 Diane Jans seems impressed with the dimensions on her lifetime best trout, which plucked her black Super Spook Jr. from the top of the waves on a stormy spring morning.
An outbreak of brown tide can be more than just a minor nuisance to fishermen; in the worst case scenario, the algae makes catching fish on plugs far more difficult than in clear water. It's easy to become frustrated by the way the murky water changes the game, taking away our ability to detect bottom features and the fish's ability to see our lures.

Faced with such a hindrance, many begin asking questions about what causes brown tide and why it blooms only in some places. Until recently, I was reluctant to do more than guess at the answers to those questions, because I'd never found a thorough scientific study focused on the topic. Without real, empirical evidence , I'm leery of generating elaborate theories on weather, water, fish behavior, even fish-catching techniques. Driving around in a boat, looking in the water and making up theories is not real science, nor is fishing with a hook and line.

I have now become aware of a comprehensive scientific source of information on brown algae which lists the causes that typically generate a bloom and the factors which affect its persistence. The Laguna Madre of Texas and Tamaulipas is a text which attempts to reference all of the known scientific studies done to date on the Laguna Madres of Texas and Mexico. Published by Texas A&M University Press, it's edited by John W. Tunnell Jr. and Frank W. Judd. In this enlightening book, Kim Withers makes a contribution which cites a study on both red and brown tide blooms in the Lagoons.

Withers gives credit primarily to E.J. Buskey as having done the significant research and data collection regarding both the initial causes and factors contributing to the persistence of brown algae blooms in Texas. According to these studies, "The algae causing the bloom is a very smallmorphologically indistinct phytoplankton species in Division Pelagophyta, recently described as Aureoumbra lagunensis[which] is not endemic to Laguna MadreApparently, the organism is present in low concentrations in coastal bays throughout the western Gulf of Mexico, and because it is both minute and visibly unremarkable, it is considered part of the 'hidden flora.'" (255)

Withers' discussion cites a detailed analysis of a major, long lasting bloom of brown algae, which commenced late in 1989 and lasted uninterrupted until 1997 and persists sporadically to the present day. The study asserts that the main cause of the bloom was an "extended drought that gripped south Texas in 1989... [causing] extreme hypersalinitywithin the upper reaches of Baffin Bay." (256) Salinity levels such as those measured in Baffin at the time are known to correspond with decreased populations of microzooplankton, which are major grazers of phytoplankton the size of the brown tide organism.

In addition to the destruction of the microzooplankton, the high salinities also brought about the demise of benthic filter feeders and other invertebrates which graze on organisms like brown algae. So conditions were ripe for brown tide to flourish in the Baffin Bay system heading into the winter of 1989-90, due to a reduction in the grazers that normally keep its numbers relatively low. Then freezing weather killed nearly a million fish in Baffin and the Upper Laguna Madre. As a result of all the dead fish rotting in the water, "Concentrations of dissolved inorganic nitrogen (DIN) in Baffin Bay and Upper Laguna Madre more than doubled between October 1989 and January 1990, peaking in March 1990." (256) Significantly, most of the DIN was ammonium, which is useless, even toxic, to most other microorganisms, but not to the brown tide algae.

Since the bloom was documented to have started before the freeze killed so many fish, the elevated nitrogen levels aren't cited as a cause for the bloom, but as a factor which likely intensified it. Similar freeze events along the Texas coast in other bays did not result in major outbreaks of brown tide, so freeze kills are not thought of as having the ability on their own to initiate a brown tide bloom. Blooms of this organism begin mainly in hypersaline waters in which there is "a breakdown in the factors that control algal growth." (257) Since the water is basically stagnant in a hypersaline lagoon like the Laguna Madre/Baffin Bay system, the effects of "sinking, mixing and flushing are always minimal." (257) Such areas are more susceptible to brown tide outbreaks and to the persistence of such outbreaks when they occur.

Basically, the evidence is clear. The brown tide phytoplankton is always present in the Laguna Madre/Baffin Bay system. When conditions are favorable for the organisms that graze on it and keep its abundance low, the brown tide will apparently disappear, but when conditions conspire to eliminate or drastically reduce its grazers, the brown algae will become so abundant as to become visible to the human eye, causing obvious turbidity in the water. Such turbidity can cause the loss of seagrass beds due to light reduction, and declines in abundance and variety of organisms within waters affected by the bloom. Neither of these effects is a positive one, that's for sure.

Comparing the assertions in this study to my own observations is interesting. I (and others) have noted in recent years that the bloom tends to dissipate in times of drought, then bounce back with a vengeance once rain falls in adequate amounts to create runoff into the bays. A historically wet July in 2007 was followed by a strong bloom in the Upper Lagoon. Similarly, torrential rains associated with Hurricane Dolly seemed to create a nasty blob of brown water in and around the Land Cut late in 2008, and a rainy weather pattern which commenced in September 2009 following sixteen months of drought in the Corpus Christi area preceded our most recent outbreak.

I accept the premise that brown tide blooms when factors disrupt the balance between the algae and its grazers. Since most of the recently observed blooms gained a stronghold after significant rain events, it appears that runoff from pastureland on local ranches affects the chemical composition of the water in a way that is generally favorable to the brown algae and not its grazers. Or, it could simply be that heavy rains occurring after a drought create optimal salinity levels for to the brown tide phytoplankton at a time when its grazers have disappeared.

Ironically, Withers' study asserts that rains and runoff will eventually cause a bloom to dissipate, when the salinity drops enough for the brown tide grazers to flourish and reduce the algae to normal levels. This type of "turnover" happens faster in bodies of water which have more mixing, sinking and flushing, due to their close proximity to rivers and/or passes to the open Gulf of Mexico.

One thing I can now say with certainty is that the severity and persistence of the latest brown tide bloom in the Lower Lagoon was intensified by high ammonia levels in the water caused by the presence of dead fish killed by a red tide outbreak there last summer and fall. I hope some of that "bad water" is flushed out of the system through the East Cut before the prevailing onshore breeze blows it over here and makes our fishing tougher! Unfortunately, having a better understanding of the science of brown tide does nothing to help a fisherman catch more fish. Sometimes, coping with it and catching fish is possible through creative tactics and patience. Other times, fleeing from it and fishing unaffected areas is a much wiser choice.