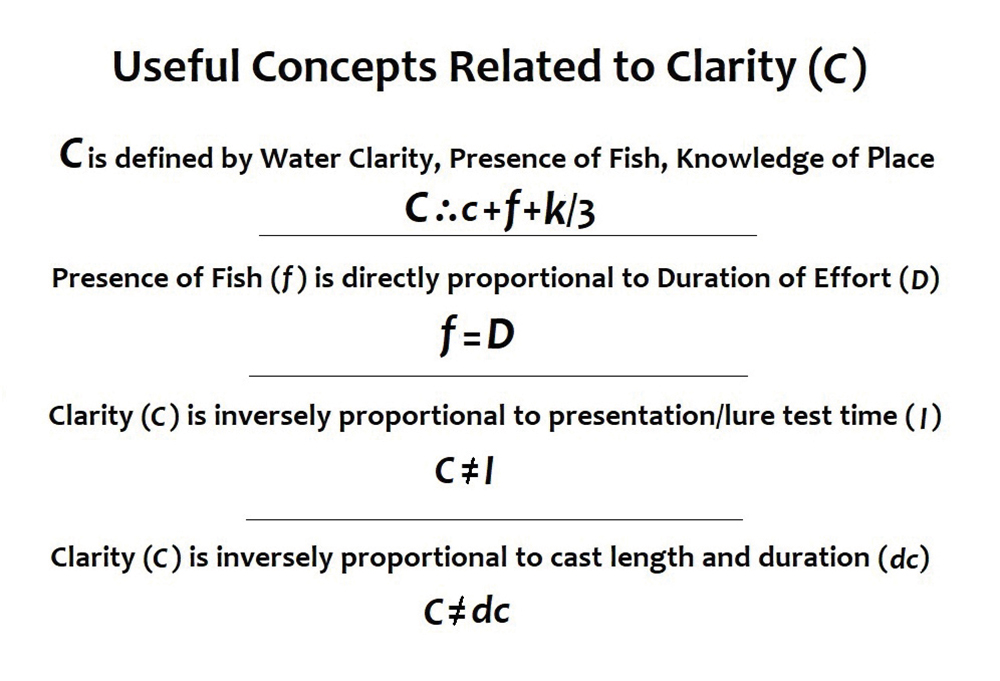 Water clarity influences an angler's ability to catch fish with artificial lures—clearer water facilitates easier catching, on average. While trying to fully grasp its effects on productivity, anglers should think of clarity in broader terms than simply as a measure of water quality. In a specialized context, Capital C Clarity (C) results from a combination of three elements, all of which contribute to an angler's ability to clearly discern both the physical attributes of the area and whether fish swim within reach. Ultimately, the clarity of the water (c), the angler's ability to perceive the presence of fish (f) and the angler's knowledge of the topography of the place (k) combine to define C.

When someone fishes in crystal clear water and can see plenty of fish within casting range, also all the structural and cover elements in play, we can rank the situation as a 10 on the C Scale (10C). Anglers who operate from towers, riding high above shallow, clear water, most often encounter situations which meet these criteria. When they see enough of the right fish in a place, they stop to fish. When they see few or no fish, they keep the throttle pressed forward.

The same anglers also keep moving when they find themselves in a place with extremely turbid (dirty) water, where they see no evidence of fish and where they have no knowledge of the layout of the place. Choosing to fish in a situation which rates as 0C feels like a form of insanity to most people; doing so usually indicates the angler has no other choice.

Anyone encountering supremely dirty water and scarce signs of life would most often correctly begin searching for some other place to fish. From these facts, we can deduce the obvious effect exerted by one of the three elements of C on angling efforts. The presence of fish tends to increase the appropriate duration of effort (D) for a place. Stated another way, the number of fish present is directly proportional to duration of effort (f=D). In a 10C situation, leaving fish to find fish makes no sense; searching for a way to catch the many fish within reach and/or waiting until they get hungry makes perfect sense.

The angler's ability to see plenty of fish reduces the effect of knowledge of the spot to nil, since the angler chooses to cast specifically at fish, rather than at perceived productive parts of the area. In this specific case, k becomes knowledge of where fish swim within reach, rather than knowledge of the location of generally productive bottom features like rock faces, reef edges, depth contours, grass beds and/or potholes.

In most cases, when calculating how C impacts the logical duration of effort justified in a place, anglers must consider other factors, since the appropriate time to allow for testing a place depends on multiple, related variables, including the physical layout of the place, also the season, time of day, weather and celestial elements in play. Generally, one can expect to earn more strikes per unit of time in warmer water than in colder water, and when a stimulator like weather, tide cycle or moon phase elevates the feeding mood of the fish.

A higher expectation for a fast bite rate generally reduces the logical value of D, while a lower expectation increases D. Greater awareness of all aspects of C, combined with an astute expectation related to bite rate will help an angler make better decisions about when to stay and when to move, since no one can correctly assert any specific unit of time as universally appropriate for testing locations.

The value of C affects more than the duration of effort, at least for anglers who properly adjust their plans and tactics to account for the various aspects of the situation. Two primary tactics vary most widely in response to the changing values which comprise C: the amount of time (and number of casts) used to test the effectiveness of each lure deployed (l) and the length and duration of each cast (dc).

Again, starting off by thinking about the logical effects generated by a 10C situation helps clarify these effects in more complex settings. An angler who can see exactly where fish swim within reach can aim casts directly at places which allow one or more fish to see the lure and potentially strike. If a few casts made in ways which should elicit positive responses from fish in the form of strikes don't do so, the angler can correctly perceive a need first to change presentation style, then the lure itself.

In other words, fishing in a 10C situation dictates a low number of attempts with each presentation and lure before changing, until and unless something appropriately productive emerges. Though some 10C situations can require making multiple casts with the right lure before a fish strikes, making dozens or scores with a lure after it's been seen and ignored becomes a sadly stubborn form of madness.

So C is inversely proportional to the amount of time and number of casts used to test each presentation and lure (C≠l). This same inverted relationship exists when one considers the duration of each cast and retrieve. When an angler can see the targeted fish, a cast should be abandoned as soon as the fish proves it isn't going to strike. Presenting the lure all the way back to the tip of the rod through empty water serves no sane purpose. So C is also inversely proportional to duration of cast/retrieve (C≠dc); a higher value of C dictates making shorter, more sharply focused casts.

Most often, anglers find themselves working in situations which rank either 4, 5 or 6C. In situations like these, consideration of all three aspects of C helps one refine strategies in the most efficient ways. If a situation ranks 5C because water clarity runs high, but scant evidence of fish can be seen in a place well known to the angler, all components of the strategy should be shortened, meaning the angler should look for a new place to fish after a relatively small number of casts directed at known sweet spots produce no strikes.

However, when a value of 5C occurs when water clarity runs low, but the angler perceives plenty of evidence of the presence of feeding fish, and the angler has poor knowledge of the lay of the land, a longer duration of effort certainly becomes justified. (See: A Pair of Different 5C Scenarios) The paramount variable is the value of f—seeing fish, seeing evidence of feeding fish and earning strikes all elevate the value of f and dictate planting the feet.

Essentially, testing and experimentation serve a single purpose—to elevate the value of f to 10, by proving plenty of fish swim within reach. This happens if and when the bite rate rises to a level perceived as appropriate for the situation. Given an acceptable bite rate and an f10, leaving fish to find fish makes sense only if the fish coming to hand fail to meet the standards of the angler who's catching them.

Consideration of situations with low C values helps one gain a more complete grasp of all these concepts. When c, f and k all run low, fishing in a place for a long time makes little or no sense, superficially, but testing lures and presentations while giving all parts of the area a chance to produce takes time, so any angler who chooses to fish in a place with a really low C faces a difficult quandary. At its core, developing a plan to catch fish in a relatively unfamiliar place with poor water clarity and scant signs of life begins with a lure choice based on sound principles, considering the many aspects of the situation. After choosing some lure which logically fits the situation, the angler should methodically cast in ways which allow for thorough coverage of the entire space, normally by fan-casting, working either clockwise or counter-clockwise, making subtle adjustments to presentation over time.

The angler should execute each cast fully from start to finish, without reeling in and starting over frequently, to allow for the most thorough test of the area, in the absence of known and/or visual sweet spots. To repeat, C is inversely proportional to the duration of cast/retrieve (dc), meaning a smaller C value dictates making longer casts which take longer to complete. Similarly, each lure requires a longer test time when the value of C runs lower, since the angler has no way of determining whether fish have in fact seen or at least become aware of it without striking.

In a situation with a low C value, earning strikes becomes the only way for the angler to figure out whether fish swim within reach. In the end, standing and grinding for a long time in a situation with a really low C makes little sense, given other options, unless strikes indicate the presence of fish, which inherently raises the value of C, by elevating the value of f.

If all the water in the available area looks dirty and dead, like when a bad brown algae bloom affects a hypersaline lagoon, the angler's knowledge of the area exerts greater impact on productivity. Anglers with a more extensive, detailed awareness of the physical features of the waterway can choose to fish in more places with high k values. In such places, executing casts around known productive (but not visible) sweet spots improves their chances of elevating the values of f and C within a reasonable time frame.

Anglers with the strongest fish location skills rely on more than their ability to see into the water. They temper reasonable predictions about the bite rate with astute observations and evidence earned through methodical experimentation. In these ways, both their knowledge of the typical behaviors of the fish and their familiarity with the anatomy of the waterways contribute significantly to their success.