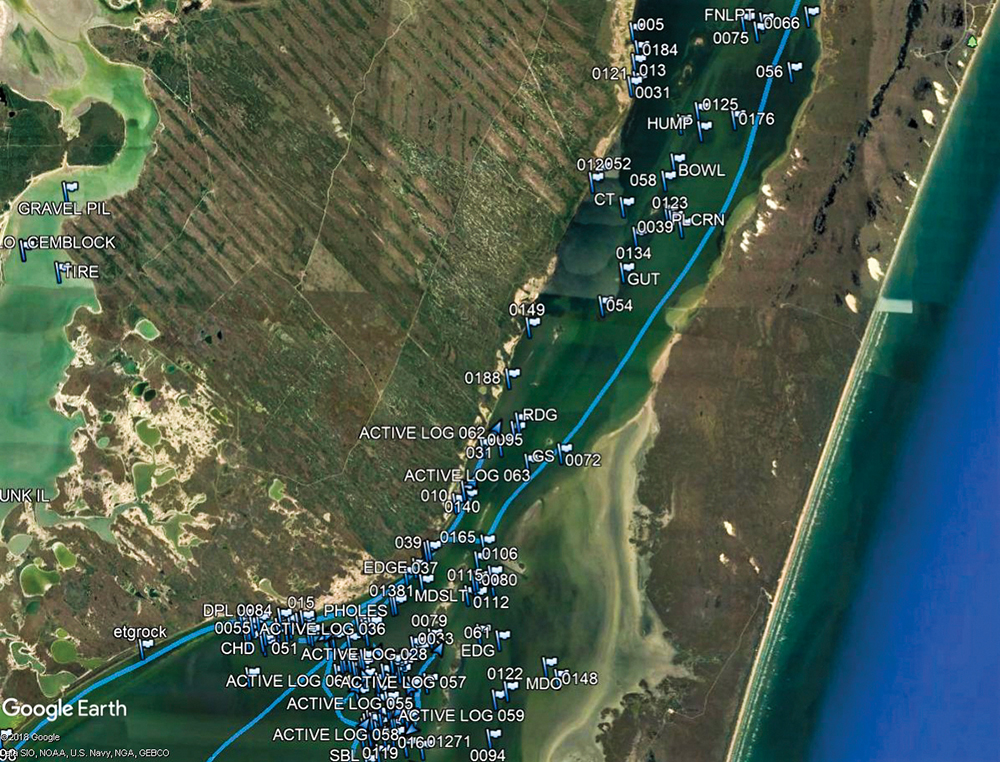 Marking numerous waypoints and creating spot-specific logs for all of them aids in the never-ending quest for complete knowledge of the bay systems and how conditions affect fishing their various parts.

In today's modern world, using tools like Google Earth and GPS, anglers can create meaningful fishing logs, rich with detail and depth. Anglers who maintain two types of logs will likely derive maximum benefit from their activities, especially if they integrate and cross-reference the data.

Recording GPS data in the daily logs would connect them securely to the spot-specific logs in a meaningful way, as would recording the dates of daily logs in the notes of spot-specific entries. In the digital realm, this could allow one to click back and forth between the two sets of related logs.

Regardless of the type of log, studious anglers maintain data in three categories: circumstance, strategy and outcome. Circumstance data includes date, time, duration of efforts and events, celestial influences like tide level, tide movement, moon rise and set and weather elements, meaning air and water temperature, wind speed and direction, water clarity and salinity level. With all these elements, any significant change affecting strategy and outcome should be noted in the log.

Strategy data includes choice of location(s), choice of drifting vs. wading, direction and pace of movement, lure choices and presentations deployed, including anything more specific which bears significance, meaning elements which obviously impacted the productivity of a strategy, positively or negatively.

Outcome data documents the number, size and species of fish caught. As with the other types of data, more detail makes the numbers more meaningful. Of course, anglers doing all the work of recording this data want to catch more and bigger fish over time. Breaking the data into these three categories and recording it all systematically can aid in achieving the goals of improved consistency, higher productivity and better quality of fish caught. Creating a numbers-based system can enhance this potentially complex endeavor.

In the circumstance realm, numbers naturally come into play. All dates, times, wind directions and speeds, air and water temperatures express themselves numerically. To maximize ease of use and benefit, one might transform water or air temperatures onto a simpler scale, where temperatures below 60°=1, 61-70°=2, 71-80°=3 and 81° or greater=4. Of course, this would decrease specificity and potentially numb the benefits of the data in some cases, where small variances in water temperature create dramatic differences in strategy and outcome.

Because one cannot measure water clarity as accurately as temperature, anglers must rank it on a scale through visual observation. One can convert turbidity to numbers by ranking it on either a 1-5 or 1-10 scale, where 1 represents air-clear water and either 5 or 10 represents excessively turbid water. In places where water clarity varies most widely, like riverine estuaries with strong freshwater influence, the larger scale makes more sense, whereas in places like the Laguna Madre, which generally holds somewhat to extremely clear water, a 1-5 scale will likely suffice.

When documenting celestial influences, some numbers inherently serve the purpose, meaning the specific time of a moon rise or set, or the turn of a tide. Adding symbols or letters to these numbers takes the specificity of the data to the optimal level. For instance, the following entry might document a full moon rising at seven p.m.: FR7:00p, whereas a new moon rising at seven a.m. would appear as NR7:00a.

As with strategy, documenting any relevant changes in circumstance which affect outcome helps one refine the sense of what works and what doesn't work, and what conditions best elevate the productivity of various places and/or the general feeding mood of the fish at any location.  For instance, using a scale to simplify wind speeds in conjunction with symbols can document important weather changes.

One might place wind speeds onto a scale from 1-4, like the one for temperatures. With wind velocity, 1=speeds of 0-10 knots, 2=11-15k, 3=16-20k and 4=21 knots or stronger. Adding the directional component as a compass heading like 180° for due south will work, as will referencing the quadrants with letters like S, SE, N and NW.  Numerically noting any shifts in wind direction or speed will add detail to the log.

A wind shift occurring at 9:30 a.m. with the arrival of a cold front might show as 215°1▲0°[email protected]:30a., with the delta (triangle) representing “change” or “shift”. A word-based, narrative way of recording the same event would read, “cold front blew in at 9:30, and the wind shifted from light southwest to strong north”. In most cases, the arrival of a front causes a short-term frenzy of catching activity, followed by a long lull when catching becomes difficult.

Anglers should document such facts in the log. In other situations, more subtle changes in weather accentuate or dull the catch rate. For instance, fish often bite for an hour or so at the end of a dead-calm lull, when light onshore winds start blowing, or when harsh offshore winds in the wake of a passing front first subside, especially in winter. Documenting those facts in detail makes sense.

One way to do so involves ranking the catch rate on a scale of either 1-5 or 1-10.  So, one might add the catching data reference to the stream, 135°1▲135°[email protected]:20a»CR1^5, which represents the following: “southeast wind under 10 changed to southeast over 15 at 10:20, increasing the catch rate from slowest to fastest.”  Of course, one might also add the duration of the fast catch rate to the stream in order to best record the significance of the events.

Documenting any aspect of strategy which affects catch rate proves similarly meaningful. At a basic level, noting which spots proved most productive does this. In order to enhance the connectivity of daily and spot-specific logs, one should use GPS coordinates to reference spots. Recording details related to more subtle aspects of adjustments to strategy can provide data with equally useful meaning. For instance, one might record facts related to the choice of basic strategy, like a change from drifting to wading, noting times when those choices affect the catch rate measurably.

Specific choices of parts or types of terrain targeted within an area, pace of movement while wading, use of signs to indicate locations of fish and all other aspects of strategy should be documented in either type of log. Numbers don't readily fit with these kinds of notations like they do with the circumstance and outcome portions of logs, so they might fit best at the bottom or end of a log, serving almost like footnotes. Certainly, one should describe any measurable alterations to lure choice and/or presentation which either favorably or negatively altered the catch rate at a given location or on a given day.

In order to facilitate ease of reference and potential optimal use of data, one should record names for lures and even presentations. Of course, lures have pre-set names, while presentations don't. I use terms like “bread and butter” and “stop and start” for presentations, adding nomenclature for portions of presentations too, such as “speed burst” and “brief pause.” Using all these names and terms consistently will enhance the usefulness of data over time.

To repeat, the goal of recording and studying the data over time is to catch more fish more consistently and/or to catch bigger fish. When recording the outcome data in logs, anglers should document both negative and positive events. In other words, if no bites occur in a visit to a spot, one should reference the fact in the logs. When bites occur and fish come to hand, numbers add specific dimensions to those facts.

I advocate recording data on all fish caught, not just keeping track of target species, or fish of a size beyond the state's standard for retention. I also advocate keeping track of the average size of fish, or the percentage of keepers, or both. So, an entry might look like this: T24~15”w5K~19”^21”. The preceding reads like this: “trout, 24 caught, averaging 15 inches, with five keepers averaging nineteen inches, up to twenty-one inches.” The same outcome might appear as T24/5^21” in the log of another angler, reading “trout, 24 caught, five keepers up to twenty-one inches.” In other words, one can easily personalize outcome data references to meet priorities and needs.

Obviously, other anglers could alter the parameters of the three standards, to meet their perceived expectations, or the potential productivity of an area. For instance, PI might document average number of keepers, SPI might stand at twenty inches and TI might represent average number of fish over 25 inches.

Anyone reading this and considering starting or altering an established process of maintaining fishing logs should realize the importance of customization in the end. Logs work best for people who understand the purposes and potential uses of data. Some people like crunching numbers and looking at things within that framework, while others prefer generating and reading more word-based narratives of the same events. Certainly, organizing data in both daily and spot-specific logs and organizing the data to include detailed references to circumstances, strategies and outcomes, and both positive and negative events, will elevate the benefits of the activity.

I can envision a world in which all the data, once collected, could become part of a computer program which would essentially think for the angler. I don't know how to write such a program, but I'm sure others could create an app which would take entered data and rank spots in terms of predicted productivity, given the date, tide chart, moon phase and expected weather for an outing. Until such a tool appears on the phone, folks will need to use their brains to make such decisions. Maintaining accurate and detailed logs enhances our memory, our ability to analyze past events and allows us to make better predictions about future possibilities.