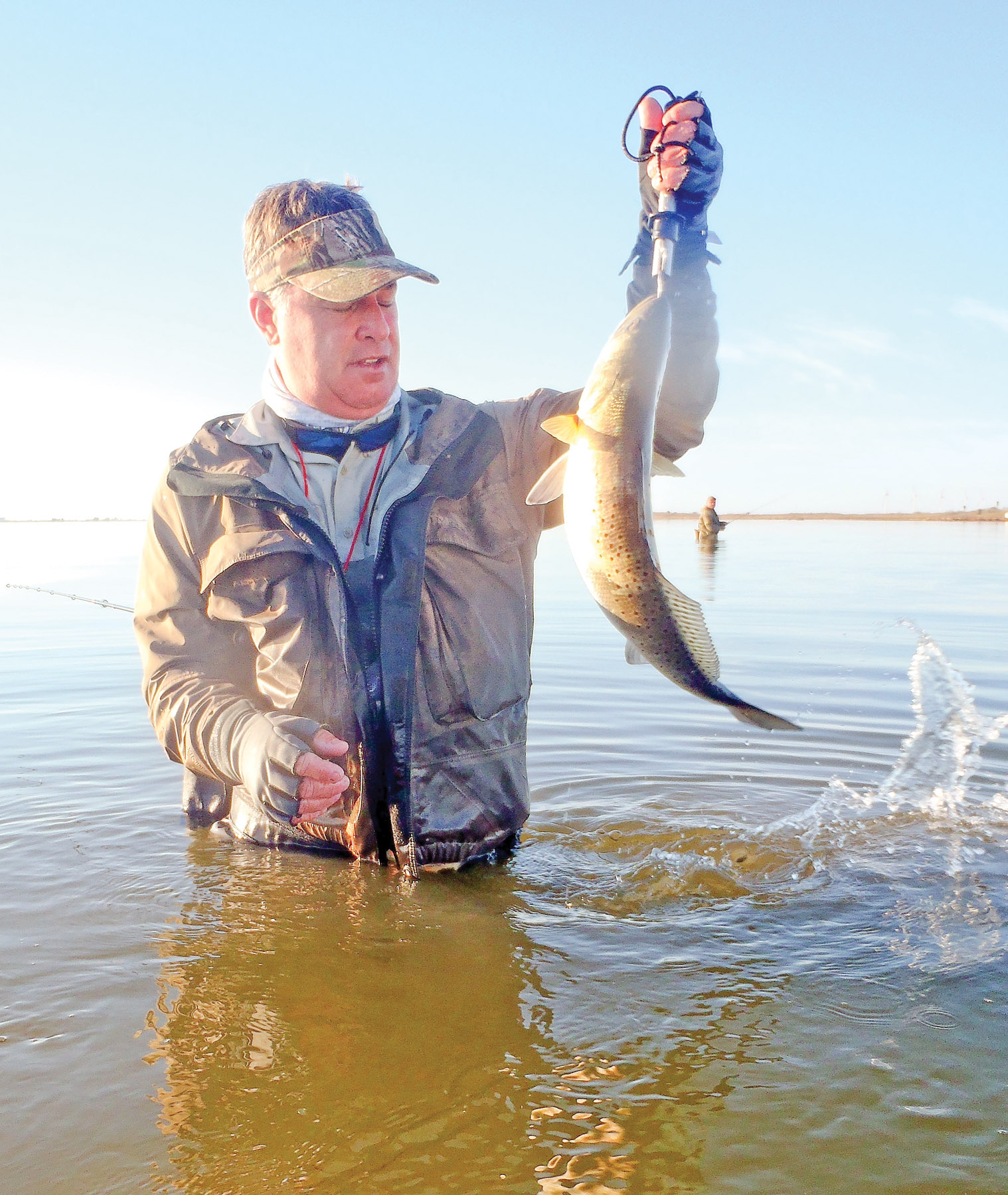 Fishing for speckled trout with artificial lures in late-winter and spring can be fast, easy and fun. It can also be frustrating and difficult. One complicating factor is the unpredictable weather. In the months of March and April, anglers are likely to encounter brisk, whistling north winds and sultry breezes gusting off the Gulf. These radically different conditions might even occur within a span of a couple of days!

Catching trout consistently during this transitional season means making sound decisions, accounting for the weather. Regular adjustments must occur in all phases of the effort: the selection of spot or area to be fished, the strategy to be used, and the choices of lure(s) and presentation(s). The need for versatility is perhaps at its highest level of importance this time of year.

Some anglers recognize the value of adaptability, so they gather all the relevant data they can prior to heading out on the water, then maintain an awareness of the need to be observant. They use a systematic approach to determine what things will work best. Others fall into various traps and repeat the same mistakes, without even realizing they are doing so.

Over the years, I've identified several mistakes commonly made by novice anglers. While these blunders will hamper the effectiveness of a fishing effort at any time, they are perhaps hardest to avoid when fickle, windy weather exerts a strong influence, as it often does in late-winter and spring. Stepping around these pitfalls can only be done if one recognizes they lie waiting in the path.

The first and most obvious problem many people have is the reliance on a short list of favorite spots, to which they return too frequently. I (and others) refer to the list of spots as a milk run. At its core, this term is somewhat derogatory, though working the milk run can at times be productive.

Anglers who want to expand their lists should study all available resources related to the waters in which they fish, including hot-spot maps, Google Earth images and GPS systems. Making a point to visit and explore new areas should become a priority, as should the maintenance of a detailed log related to these efforts. Eventually, with experience in more areas, novice anglers can learn to avoid the crippling reliance on a select few spots. All anglers, including the best ones, rely on a catalog of spots, but better captains are different from novice ones in several key ways.

Most importantly, better anglers have a more extensive catalog from which to choose. Their knowledge of the overall area to be fished is more thorough, providing them with numerous choices of where to make the fishing effort. This superior level of knowledge spills into a second distinguishing characteristic: experts carefully consider the prevailing conditions of the moment when selecting an area or set of spots to target.

Additionally, top-notch anglers don't become too married to the milk run; they keep their eyes and minds open, always trying to recognize signs which might lead them to the mother load in an unanticipated location. Especially in the spring, when weather changes rapidly and all kinds of fish are moving around readily, good catches can be made in unfamiliar places. These catches will be made most often by people who are actively looking for fish, not ones who are committed to returning to a few favorite honey holes time and time again, regardless of what they observe along the way.

In the second aspect of the effort, the choice of strategy, another common mistake is made by many anglers. I call this choice a mistake because of an acknowledged preference I have for wading, as opposed to fishing from the boat. If anything, I'm perhaps too committed to wading, because I believe stealth and control almost always enhance the potential for catching more and bigger fish. I do recognize situations where fishing from the boat is a better choice, and I make this adjustment to strategy when I feel it's necessary.

Many anglers make the mistake of wanting to fish from the boat all the time. In the spring, when winds are often strong, controlling the movements of the boat and reducing the noises generated by hull-slap are difficult things to do. Even calm conditions can make catching fish from a boat more difficult, unless one deploys a trolling motor to create some movement.

Some people are forced by a limiting condition to stay in the boat rather than wade, but for more able-bodied anglers, the desire to fish exclusively from the boat results from fear (mostly exaggerated and unfounded), and/or a lack of confidence in knowing where to make the wading effort. With little faith in their ability to identify precise locations where fish should be present, these people figure they'll just stay in the boat while it moves around and covers a lot of area, hoping to pass through some fish along the way.

Such a strategy is a recipe for mediocre to poor results. Anglers who realize they have this weakness should properly equip themselves for wading and learn to analyze conditions and situations more thoroughly, to identify when wading clearly offers superior potential over boat fishing. Of course, once anglers make a choice to wade, other common pitfalls potentially lie in wait.

Many waders move through an area too quickly. This happens, I believe, because these greyhounds or track stars incorrectly identify what trying harder means. To them, trying harder means covering more linear distance, when in reality, it often means covering a smaller amount of area more completely. Most wading anglers would catch more fish if they simply slowed down and made more casts without moving much. Especially when strikes and hook-ups are happening, it's best to stop, stand and fish.

Moving too quickly through an area is, at its core, a form of arrogance. Such a plan implies that a few casts made in a place should result in caught fish, and if no fish are caught, it can be correctly assumed no fish are in fact present in the place. Often, this isn't the case; the angler simply hasn't found the correct lure or presentation needed to elicit strikes. Or, the proper lure hasn't been placed in close enough proximity to a fish to entice a strike.

In addition to moving through an area too fast, anglers also commonly move straight downwind while casting downwind. In essence, these anglers are rushing through the place on a narrow track, covering only a small corridor of water, while missing what's out to the side of the path. A much better strategy involves shuffling sideways to the wind, zig-zagging along at a slow pace and casting in various directions, so a wide swath of water can be covered effectively.

I won't pretend to understand all the reasons why, but I know lures work better when retrieved crossways to the wind, rather than directly into the wind. This is more true with some lures than with others. While it's important to recognize when long casts made straight downwind can be advantageous, it's more important to acknowledge the need to fish crossways to the wind most of the time. A wader who zig-zags through an area slowly while fan-casting in a methodical manner, who then stops when bites are earned, will catch far more fish than one who races downwind while casting straight ahead, like a roadrunner with a coyote nipping at its tail.

For some of these speed demons, the only thing which consistently stops their forward momentum appears to be the need to change lures. Lesser anglers often fall in the trap of changing lures too frequently. They do so without any real plan, without implementing sound and solid principles. This mistake, much like the insistence on fishing from the boat all the time, is based on a lack of confidence. Without any real sense of what plug should work at a given time, these anglers seem bent on throwing everything in the box at the fish, hoping to stumble onto something productive.

Anglers who run through fifteen or twenty lures during a day, while giving each only a brief and cursory try, are wasting time and displaying a lack of focus. Rather than experimenting randomly and making such frequent changes, they'd be better off selecting a handful of lures and working to deploy each in a more thoughtful and precise manner, while contemplating a specific order of use, depending on the conditions of the day and the observations they make about how actively the fish are likely to be feeding.

Aggressively feeding fish are easier to catch on a variety of lures worked in a number of ways. Sloppy presentations won't be exposed when jaws are snapping eagerly at anything within reach. Most of the time, though, executing precise presentations results in the catching of more fish. Identifying which subtleties of presentation are most likely to improve productivity isn't easy in any case; doing so is impossible if one is unwilling to vary presentations at all.

Many anglers fall prey to a tendency to present each type of lure the same way at all times. All lures can be worked in various ways, and no lure is always effective when deployed just one way. For instance, many novice anglers know topwater plugs are effective when presented with their heads jumping side to side, so they work hard to learn the art of walking the dog. While trying to get the hang of this rhythmic technique, some become mindlessly committed to repetition. Much of the time, varying the rhythm, speed and intensity of the presentation with a floating plug results in far more strikes than simply bringing it all the way back in with a steady clack, clack, clack.

Too often, I see people fishing with topwaters in what I call auto pilot mode, where they repeatedly twitch the rod tip and slowly reel out slack, without any variation in the cadence, speed or length of the stroke. If they aren't getting strikes regularly, they are practicing a form of fishing insanity, doing the same thing over and over again, while expecting the outcome to change. Conversely, supremely consistent anglers react to a slow bite by making subtle variations to presentation, in an effort to discover some triggering component.

Mastering the use of multiple presentation styles with various lures requires concentration and effort, acknowledging the difficulty of the sport. All of the above-referenced mistakes are repeatedly made by people who deny the inherent complexity of fishing with artificial lures. Catching trout on plugs during the time of change from winter to spring is not always simple or easy. Thoughtful anglers who acknowledge the challenges and who apply themselves in an attempt to become more skilled and versatile have a better chance of catching fish consistently.