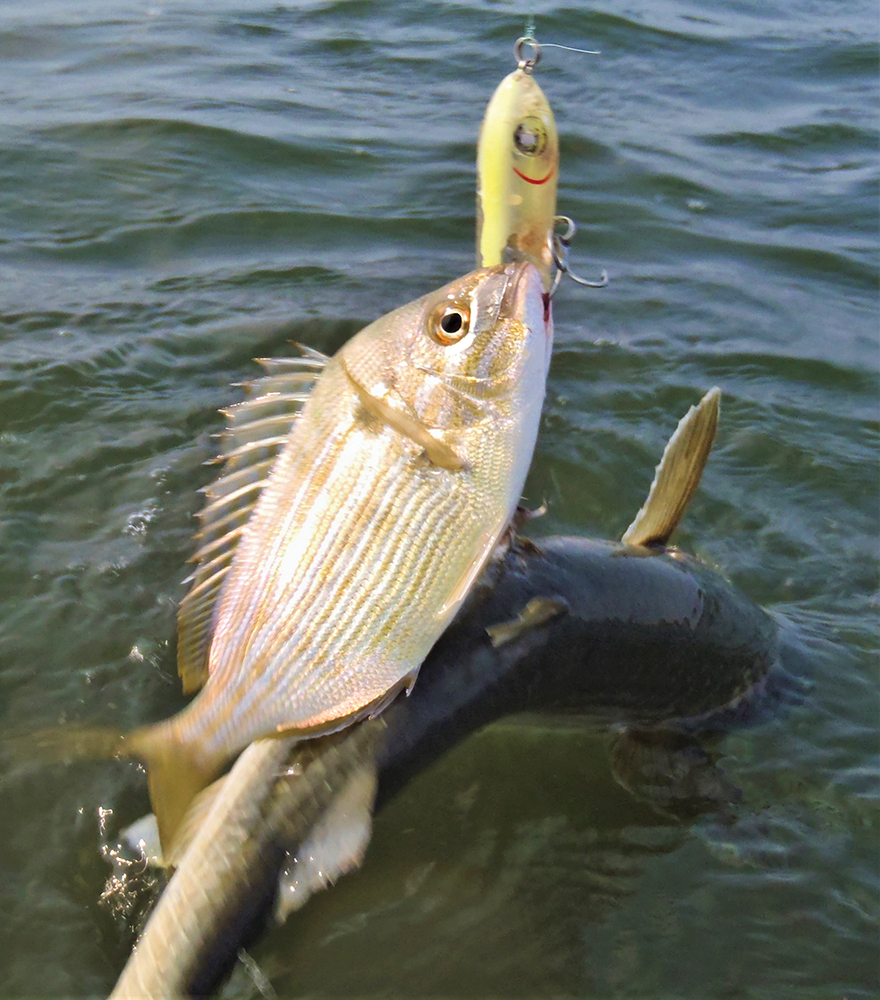 "Fishing in the presence of copious amounts of forage generally enhances a lure-chunker’s odds for success."

While crowded around a backyard picnic table, people ready to dig into a steaming pile of boiled crawfish will likely refuse to eat even a bite of quiche. With eyes and nostrils full of such piquant dreams, why would any red-blooded picnicker taste a baked-egg pie? Sometimes, folks crave specific foods, and they close their minds and mouths to other fare.

Fish behave in much the same manner, in some situations. While out on the water, I've witnessed the consequence of extremely focused appetite many times. When trout and redfish focus intently on a forage species of a particular type and size, especially when the abundance of the forage runs high, catching them can prove quite difficult.

Like the time I watched hungry herds of redfish corralling button shad on the sand flats behind San Luis Pass. At least a half-dozen groups of several hundred bronze bullies prowled purposefully through the shallows. When they spied a school of shad, they'd gradually increase their cruising speed, pushing a wide wake forward, like a prologue to coming events.

As they sped up, the wrinkle on the water steepened, and shad began to burst through the front of the wave, shooting into the air like silver sprinkles. Then, the heads of the reds appeared, mouths agape, gulping shoals of shad for several yards, one replacing another in sequence, until they decimated the hapless school in their sights. About the time one herd finished a foray and disappeared, another would emerge a short distance away, repeating the blitz.

As I watched, amazed, the copper-colored hordes swam right by me, tickling my legs as they passed, as if oblivious to my presence. Though they fed with supreme intensity, well within my reach, catching one proved difficult at best. After much trial and error, I did pull a couple from the fringes of the schools, using red soft plastics, after failing to entice a single bite with a small spoon, which mimicked the size and shape of the prey nicely, but seemed to get lost among the innumerable shad.

The details related to those two strikes would suggest the strategy of presenting some lure which contrasts the hatch a distance away from the center of the focused activity works best, but this certainly isn't always the case. In many other instances involving hyper-focused schools of marauding predators, earning a strike requires placing a lure which effectively matches the hatch directly in the line of fire.

When I lived in Bayou Vista, I witnessed this many times in the canal behind my house while watching frenetically feeding specks dart from the shadows at the edges of the orbs of submerged lights into their brightest portions, adeptly snatching small minnows or shad.  When the abundance of these tiny fish ran highest, the trout became nearly impossible to trick, and the few strikes I did earn came only after I placed lures which beautifully imitated the size, shape and movement patterns of their prey close above the glowing bulbs, right in the bulls-eye of the attack zone.

I recall trying the opposite approach and throwing larger soft plastics and spoons, which at other times almost always urged bites further from the lights, only to become frustrated when the predators ignored them completely, while slurping up their favored food source with apparently reckless abandon.

Similar events have played out on the bays, during daylight hours; I've seen plumes of glass minnows spraying out of the water in numerous parts of coves around me, indicating the presence of feeding fish, likely a mix of trout, redfish and flounder. In many cases, despite my successful attempts to place a variety of lures in close proximity to the fountains of harried prey, I made many casts for precious few bites. Sometimes, I caught nothing at all. Similar tales related to me by others add to my awareness of situations like this.

Recently, I received a call from Ari Schwartz, my old Troutmasters partner. He wanted to tell me about something he'd experienced while fishing at night in a shoreline cove in West Galveston Bay. “We were wading, not catching much. It was real quiet for a while. Then we started hearing all this noise in the marsh behind us. Eventually, we couldn't stand it, so we trolled in there and started looking around with the Q-Beam and found a huge school of reds attacking bait repeatedly.  I've never seen anything like it,” he said.

“Were they hard to catch?” I asked.

“Actually, they were,” he answered. “When we were able to cast the lure right in the middle of a really big herd, we'd usually get a bite. But if we were off just a bit with our cast, we had no chance. And, once the herds thinned out to smaller pods, we basically stopped getting any bites at all. I think we wound up catching five or six.”

His anecdote fits my script, and reminds me of other tales he's recounted on numerous occasions, including nights on which he heard multiple loud crashing noises and slurps on flats around him, without catching much. I suspect, in those cases, some version of a hyper-focused feeding event played out, and hungry predators ignored what he offered, like folks at a clam bake refusing to nibble on a rice cake.

For me, these stories reveal multiple morals. At a basic level, they emphasize something I regularly say about what I call the “feeding circle” of predatory fish. Ironically, the most excited feeding level rides right next to the least one, at the top of the ring. Strangely, in some circumstances, ravenous fish behave somewhat like sated fish, confounding anglers' attempts to catch them.

Hungry, cooperatively feeding groups of predators supremely focused on a single source of food don't eat much of anything else, and for some period of time, distracting them from the apple of their collective eye becomes extremely difficult. The intensity of their focus shrinks their cones of influence temporarily, though they possess ample appetite. Especially when the amount of available forage runs high, these actively feeding fish remain difficult to catch.

In such a case, the schools of predators essentially swim into a gray area on the feeding circle, one which narrowly separates the optimal bite-attitude from the minimal one.  Eventually, their bellies bulge, and they cross over a fine line, becoming nearly impossible to entice into taking another bite.

This scenario complicates the ramifications of a regularly accepted truth. Generally, finding a large number of predators competing for food in close proximity to one another makes catching one of them easier, compared with the attempt to catch a cruising loner. However, if small pods of predators cooperatively attack a single, abundant food source, catching one of them might become nearly impossible. These facts tempt some lure-chunkers to say things like, “The bite was really tough; we had too much bait in the area.”

I don't agree with such an assertion, as a rule. The presence of ample forage in a place normally increases the odds of productive efforts for artificial enthusiasts. This is most true when a variety of forage species inhabit the space, and when predators compete for them, as opposed to cooperating to take them.

In a useful way, planting oneself in the midst of copious amounts of forage makes the job of determining the specific locations of predators easier. The movement patterns of the prey species blow the cover of killers lurking within close range. Huddled, hurried herds of bait  indicate fear of imminent attacks, providing a blueprint for anglers to use when making casts.  Sending lures directly into the line of fire generally increases the odds of earning strikes.

In rare instances, trout and reds attack almost anything they see, like hungry teenagers unleashed on a pizza buffet after frolicking all afternoon in the neighborhood pool. Such cases grossly simplify things; toss some lure toward the fish, start reeling it in, then hold on tight and wait for a fight.  At other times, catching trout and redfish becomes exceedingly difficult, when they gather in groups and obsessively focus on one food source, like a bunch of backyard crawfish boilers.

Most of the time, though, these predators prove somewhat easy to catch on artificial lures thrown in the right places and presented in effective ways, considering the variables in play at the moment. The importance of this one element in the equation doesn't really change. In almost all situations, including ones in which the targeted fish feed aggressively and ones in which they don't, the choices anglers make about what to throw, where to throw it and how to present it profoundly affect the number of bites earned.

I suspect many folks fall into a kind of trap when confronted with the sometimes confounding consequence related to highly-focused predators actively cooperating to target a single, abundant item on the metaphorical menu. If they incorrectly assume the situation will make the fish easy to trick, and lose sight of the importance of lure choice, casting precision and presentation, they may wind up feeling like someone trying to peddle celery sticks at an all-you-can-eat barbecue buffet.