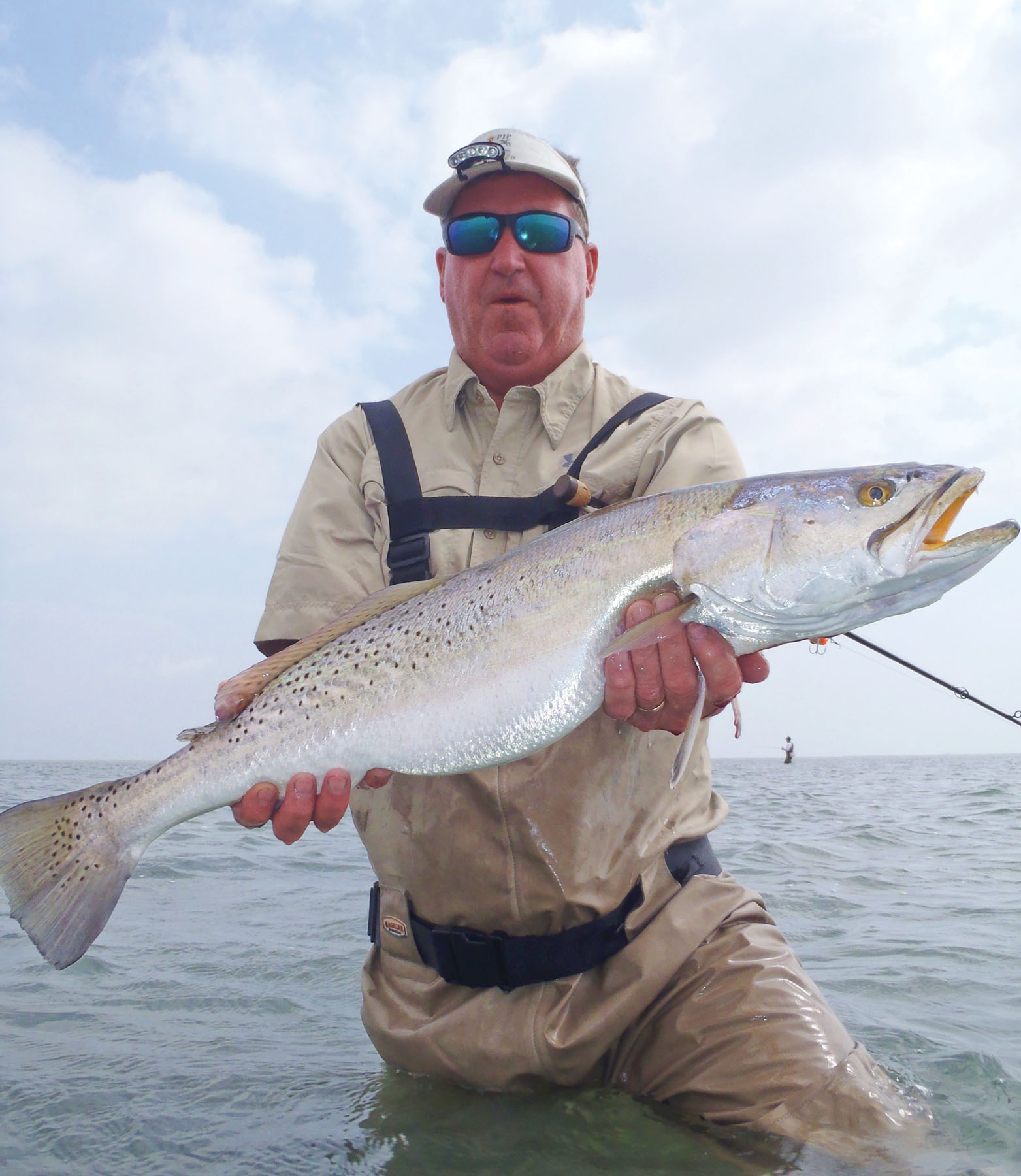 Tim Duffy coaxed a violent strike from this 29 1/2 inch trout by deploying sharp side to side movements with a floating Corky Fat Boy. In the moderate water temperatures of spring, such presentations often work best.

I recorded details related to all my fishing excursions from late 1990 through early 2002. Keeping track of all these bits of information helped me become a better angler in a variety of ways. Consistency in the sport of lure fishing, as in all sports, is best achieved by those who learn to identify and eliminate mistakes, also to build on strengths and repeat successes.

Identifying and eliminating weakness is not an easy task for fishermen. When an outing turns out to be less productive than desired, it's often hard to elaborate on the reasons or factors which led to the outcome. Anglers who can't clearly recognize flawed choices in location, strategy, lure choice and/or presentation, are likely to repeat the mistake(s) again.

Likewise, anglers who fail to acknowledge key positive decisions will be less likely to build upon those strengths and repeat the success resulting from them. Recording and tracking relevant information over time helps studious anglers more quickly learn where to go (and not to go) and what to do (and not to do) in various fishing situations.

For most, a more thorough fishing log is better than a sketchy, cryptic one. Journals are personal, though, and some people have the ability to remember and analyze greater amounts of data than others. Regardless of the learning style, preferences and needs of the angler, a good fishing log will include all or most of the information listed below.

Any good log entry should include the date and time of the outing, and a list of all locations tried during the excursion. Ideally, some time frame for each stop will also be given. It's important to include reference to locations where an effort was made without positive results, as this can be the most useful information of all in the end.

The number of anglers making the excursion should be recorded too, perhaps even the names of those in the group. This type of data can help one retrieve specific details from memory years later. It also clarifies results in a specific way; for instance, one angler catching twelve fish is a different outcome from four anglers catching the same number.

A useful record definitely includes reference to all fish caught during an outing, including small fish that aren't keepers according to state law. Anglers intent on becoming more versatile and targeting a variety of species should keep track of all types of fish in their logs. Those intent on focusing on one species might prefer to record details related only to those particular fish. Other references to size should also be made.

For instance, I maintained a running count of keeper trout, reds and flounder caught on all trips for nearly thirteen years. I also monitored the number of trout caught exceeding twenty, twenty five and twenty seven inches. Additionally, I'd describe the exact dimensions of any exceptional fish caught, writing down the length, girth and/or weight of all "trophy" specimens.

Eventually, keeping track of these details helps one refine expectations and to better understand what "good fishing" is in a given season and situation. Failing to record these details will require one to fall back on fuzzy memory, which tends to exaggerate successes and failures and is in all ways inferior to accurate data recorded soon after a trip.

Of course, other things should be included in a useful log entry too. The lures used on an excursion should be mentioned, at least in a general sense, even those that failed to produce strikes and/or caught fish. Knowing that "topwaters were tried unsuccessfully by everyone in the group" can be helpful, for instance. Though it is in many cases impossible to do so, recording the duration of use and success rate of every lure deployed is the information with the greatest potential for use. Certainly, recording specific lures used by name, including colors, jighead sizes and any other relevant information is better than just mentioning lure types generally.

Taking this area of information further, recording specific presentations that did and did not work can be helpful in learning to maximize results. Certainly, if one style or method of presentation shined above all others, making note of the fact is important. Similarly, if one angler in the group doggedly stayed with one method without success, recording the fact is relevant. Incidentally, making reference to presentations means naming those presentations and using the names over time.

Learning to describe environmental conditions in consistent terms is also helpful. Certainly, weather conditions should be mentioned in any daily fishing log. These conditions should include temperature, wind speed and cloud coverage. If significant changes occurred during the outing, such changes should be noted in as much detail as possible.

For instance, strong moons create stronger than normal tides in some areas, and learning how these strong tides affect the bite potential is of huge importance in identifying the optimal times to fish and also the times when it's basically impossible to catch fish. Strong tides will normally have a good "bite window" associated with them, but they can also muck up the water in places and create long lulls in the action too.

In areas where strong tide movement occurs on a regular basis, water must be moving in order to create the best opportunity for catching fish. Consequently, accurate tide movement data should be included in all fishing logs documenting efforts made in these types of areas. It might even be helpful to include both predicted tidal activity and observed activity, particularly if some discrepancy is noted between the two.

Conversely, in areas lacking significant tide movement, like the hypersaline lagoon of Baffin Bay and areas of the Laguna Madre far removed from tide sources, the level of the tide is more important than the predicted movements. Using a source like the TCOON Buoy system, which records tide levels (and other relevant information) at various sites along the coast, is the best way I've found to track the slowly rising and falling water in and around Baffin. Over time, cross-referencing the tide level with rates of success in areas will create a clearer picture of which spots work best with high tides and which work better when tides are low.

Conclusions like those aid in the never-ending quest to go to the right places and do the right things at the right times. Keeping track of water conditions in a log helps clarify these choices too. One aspect of the water to be logged is the temperature, if possible. Doing so will require one to have a device for measuring the temperature during the day. This data is most important when temperatures are at their extremes. The same may be said for the other detail related to water conditions which should be constantly monitored: water clarity.

Describing the water in consistent terms like ultra-clear, clear, trout green, sandy and murky would be one effective way; ranking the clarity on a scale of one to five or one to ten is another. In a numbering system, one might equate with ultra-clear while five would equal murky. Taking the scale out to ten would obviously give greater specificity than a five point system. Specificity is a key to all good fishing logs.

Consistently catching fish on artificial lures requires skill in fish location, fishing strategies, lure choices and presentations. People who have the most information with which to work have the greatest chance of making the right choices more of the time. Recording as much specific data as possible aids in this endeavor.

In addition to recording data in the specific areas, it's also useful to include a paragraph or two of "thoughts and observations" at the bottom of each entry page. These comments are especially helpful in recording poignant events in a way which makes them easier to remember.

Taking pictures of caught fish also aids in the long-term ability to remember details from an outing. Keeping pictures in the hard drive of a computer and numbering or naming them, then making reference to the files in the log is a good way to keep things organized.

Keeping track of details is the ultimate goal of anyone who's disciplined enough to create and maintain a useful fishing log. One way to generate a log is to use a paper notebook and record data with a pencil or pen. Perhaps a better way for most is to set up a spreadsheet and enter the data by computer. A template can be created and saved in a folder, then copied and turned into a new page soon after a fishing trip is made.

I've created a sample spreadsheet to be used as a template for fishing logs. Anyone interested in downloading and using the template can access it on the internet by visiting my new website, www.captainkevblogs.com. From the home page, click on the Blogs text link in the photo banner. When on the blogs page, click on either the fishinglogtemplate.xlr or fishinglogtemplate.xls link, then save the spreadsheet to a convenient location.

The template can then be customized and used to create fishing log pages. Simply copy the blank template each time before making an entry, fill in all the data in the categories, then save and name. Creating a folder to house the template and all named entries will in essence complete the creation of a fishing log, which can, of course, be printed and turned into a hard copy if desired.

I'll be making regular changes to the new website, adding blog entries and reports on an approximately weekly basis. I'll also continually update the pictures, videos and other files. The information and downloads available on captainkevblogs.com are available free to all who visit the site.