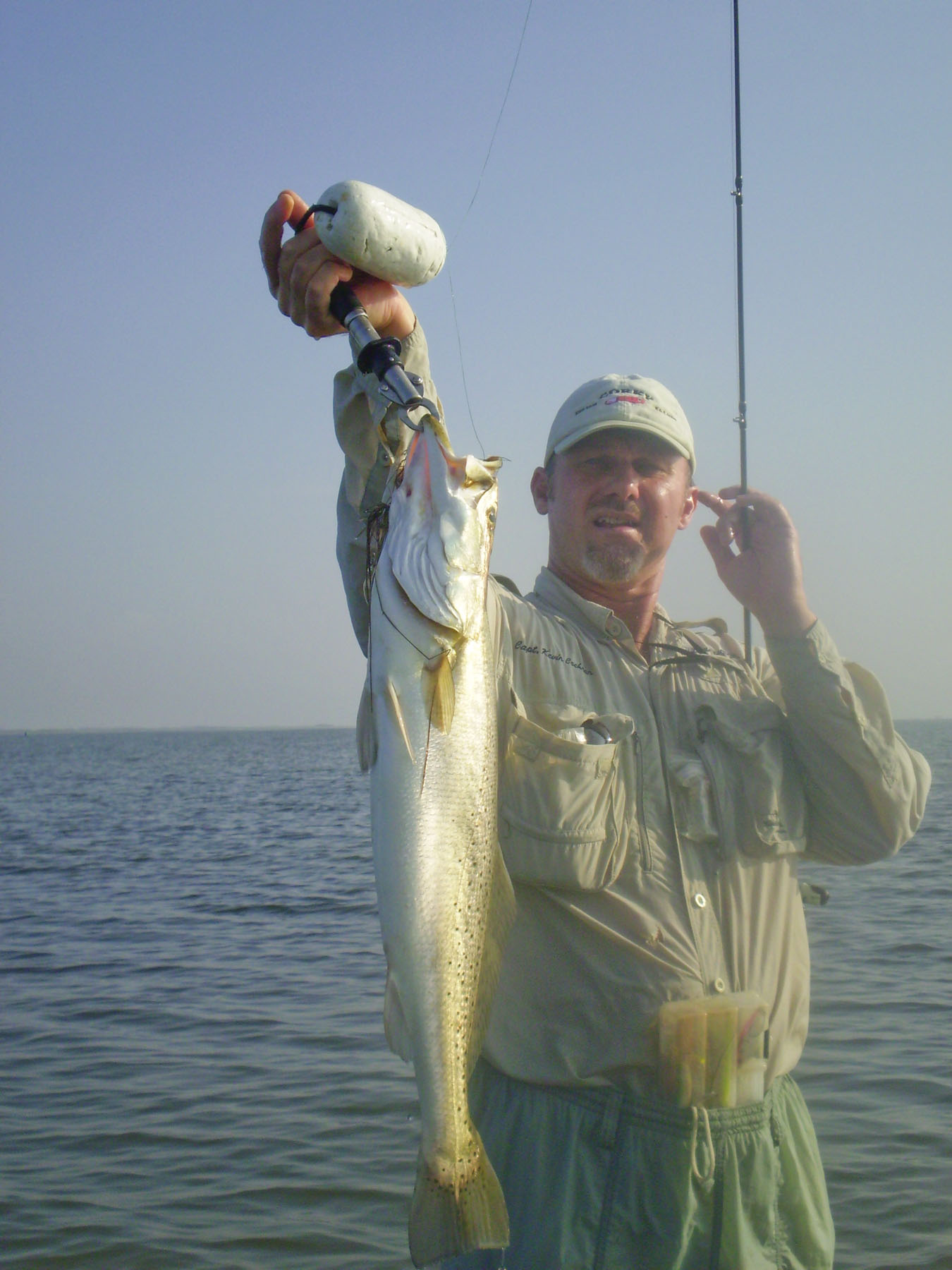 This long trout was caught and released in sizzling summer weather on grass beds which border a gut that runs from the ICW onto a shallow, sandy spoil bank.
Dead-end guts and channels are some of the most consistent fish-holding features in Texas bays. Probably the most important aspect of these features is that fish use them as routes for moving back and forth between deep water areas and shallow, adjacent flats. The words deep and shallow are relative, of course, as are the size and scope of the guts themselves.

Entire bay systems which connect directly with the Gulf of Mexico through coastal passes, especially those protected by jetty systems, might be considered dead-end guts on the largest scale. Estuaries like Trinity Bay and Sabine Lake come instantly to mind. Fish and other organisms from the open ocean can access the upper reaches of those bodies of water without crossing over shallow structures. In this way, the deep water in the "gut" is like a highway, providing easy passage back and forth from the depths of the sea to the shallows around the river deltas.

For fishermen, though, smaller scale dead-end guts are more relevant. Many of our bays have long, winding depressions running from their mid-portions into coves and lakes along their shorelines. Bays like West Galveston, both Matagorda Bays and most of the Coastal Bend estuaries have numerous features like this. Fish can and will use these depressions to move back and forth between the basins of the bays into the shallower confines of the coves. In the remotest reaches of the lakes and coves, the guts which connect them to outer waters become extremely shallow, but even the subtlest ditches extending into the marsh can be great places to target fish.

During warm periods in winter, when onshore winds typically push water into the bays and fill the coves, fish will ride rising tides into the shallow areas and may be caught along the fringes of the marsh adjacent to areas where the dead-end guts fizzle out. Conversely, when strong frontal winds drain these same areas of most of their water, fish will retreat back to deeper water. This often happens after a short-lived frenzy of activity stirred by a brief rise in water level associated with post-front winds blowing into south shoreline coves.

The naturally occurring trenches which funnel water in and out of the coves have been etched by the cumulative effects of centuries of winds and currents. Most bay systems in the Lone Star State also have scores of man-made dead-end guts in addition to their natural ones. These artificially dredged channels were mostly made for one of two reasons, either to provide access into shallow areas for oil-field related equipment, or to create neighborhoods for human habitation along bay shorelines.

All coastal developments with canals are examples of elaborate man-made dead-end gut systems. The negative impacts of such developments on coastal estuarine environments have been documented, but they do provide fish temporary safe havens during periods of extreme cold. Mullet, trout, redfish and other species will crowd into these canal systems when water temperatures drop below about 50 F, making their way naturally to the places where the guts come to abrupt ends, where current speeds are minimal.

During the dramatic cold spell which settled over Texas in the first half of January, 2010, I found the canals in the subdivision where I live on North Padre Island to be crammed full of desperate trout. Most of the fish were hanging around the drop-offs in the middle of our channels, where depths fall from around eight or nine feet down to about fifteen feet. The surface temperatures in the wind-sheltered canals barely dipped below 50 F during the big chill, though readings just outside the neighborhood plummeted into the low forties.

The other type of artificial channels, those made specifically for giving oil companies and their gear access to shallow areas, will hold fish in extremely cold or hot weather and when tides become unusually low. Old oil field channels which intersect other channel systems like the ICW or any of the major ship channels along the coast offer the best potential in extreme weather, while ones which run out of open bay areas into vast flats can be productive in milder seasons.

Other types of "dead-end guts" exist too, some of which are much harder to locate than the obvious ones listed above. These lesser recognized (but often equally productive) features occur naturally within reef systems, sand bars and grass meadows. Studying good satellite images and/or detailed topographical maps of the bays will reveal many of these places where depressions run from deeper water into shallower water, surrounded by grass, shell or sand bars. All such places are potential fish-holding sweet spots, and they function like miniature versions of the bays as a whole.

Reefs, sand bars and meadows have subtle dead-end guts which meander through and among them. These depressions provide resident fish the opportunity to move into the shallowest parts of reefs and bars without swimming with their backs out of the water; they also define ambush points and places where prey can be corralled.

Additionally, these features can significantly alter currents, predictably funneling food to predators. Studying reefs and bars closely when light and water conditions allow will often reveal subtle dead-end guts or depressions, which can be the most productive places for catching fish around these structures.

When speaking of grassy meadows, sometimes the dead-end gut is merely a set of potholes lying in a line. The depth of the water in the potholes, which appear as bright spots on the bottom, might be mere inches more than what lies atop the surrounding grassy areas, but in a shallow bay like the Laguna Madre, that can be significant.

Even in areas which are far from access to deeper water, slight depressions lying in a line amongst shallower grass can and will hold more fish at times when compared with the relatively uniform areas around them. Catching fish around such isolated depressions often means making lots of casts along their fringes, where fingers of bright bottom branch out from the main potholes into the surrounding grass, especially at both ends of the line.

Some of the time, effectively fishing dead-end guts means working the drop-offs along the sides of the channel or depression, or the hole at the end of the gut. At other times, more fish will be caught on flats adjacent to the gut, rather than actually in it, when fish have abandoned their access route after using it to enter a cove, or to move among a reef, bar system or grass meadow. Either way, fishing in and around dead-end guts is often a clear pathway to success in catching fish of various species.