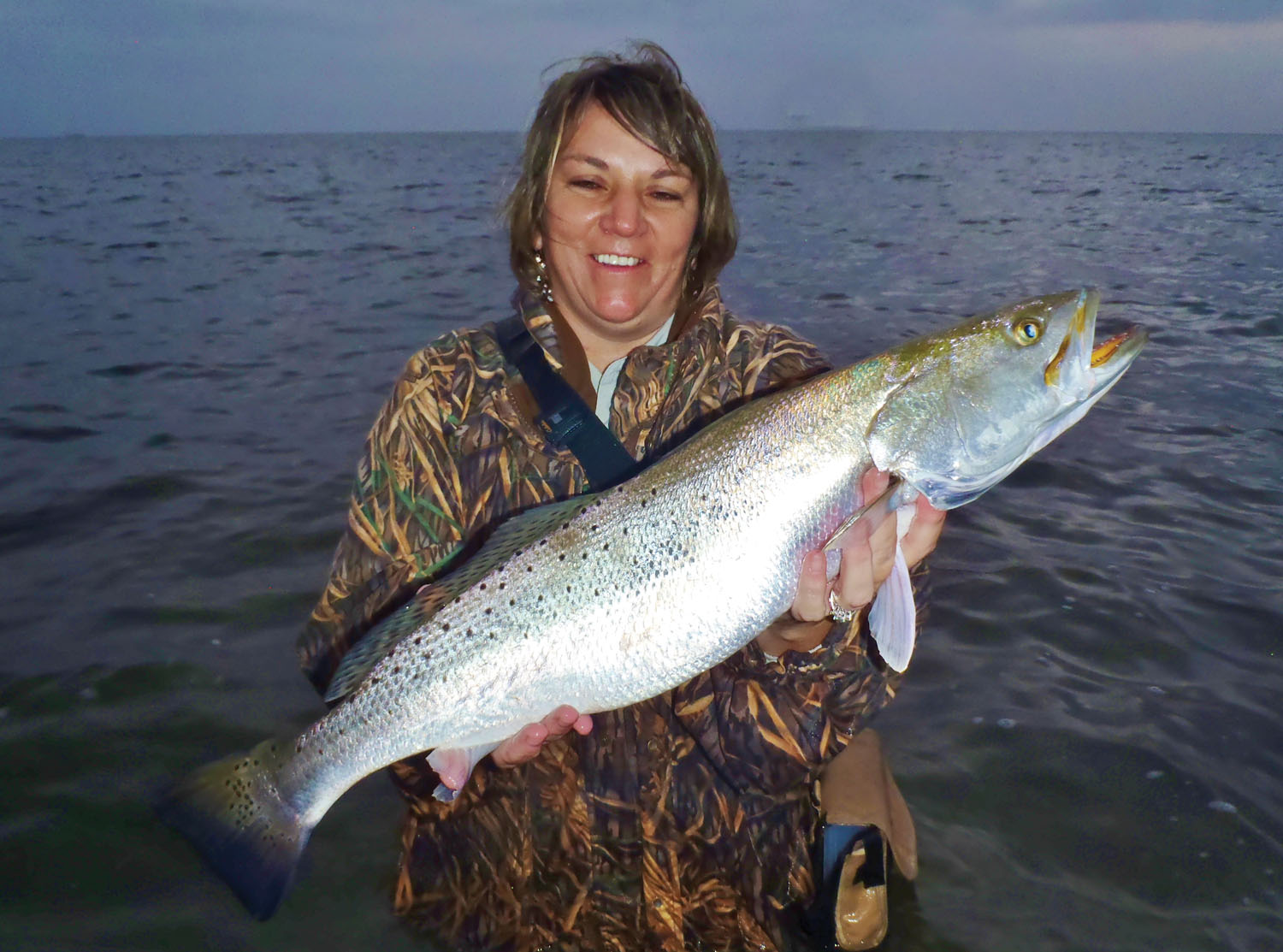 Christina Geer had upgraded her personal best trout a few minutes earlier before doing so again by catching this seven-pounder on a One Knocker, just before daylight on a warm December morning.

Accomplished anglers live in a world which necessitates constant adaptation to evolving weather and environmental elements. They realize the importance of considering the effects of prevailing conditions when planning excursions. For the sake of consistency, they must become proficient in evaluating how various factors impact their endeavors, and react accordingly.

The wise ones recognize when numerous variables favorably influence chances, and also when the elements conspire to render the arts of angling obsolete. For the sake of integrity, they must realize when specific conditions exceed the marginal marks, and become too harsh to justify any legitimate effort.

Captains who make the best judgments about these issues rely on their accumulated knowledge of details about weather and related factors over time. They do not simply trust their instincts or even make educated guesses. Instead, they use data gathered by inanimate instruments, knowing such tools provide far more trustworthy information.

Ideally, one can peruse real-time data defining all of the following when assessing the likelihood that a specific fishing situation will provide enough positive potential to justify making an outing: air temperature, water temperature, wind speed, wind direction, tide level, tide-cycle prediction and turbidity of the water. Obviously, numbers gathered at the specific area considered for the outing will provide the clearest picture of potential.

Consequently, sources on the internet which document steady streams of data prove quite useful to anglers who seek to hone their skills in assessing how specific elements affect their efforts over time. The TCOON Buoy System gives studious anglers plenty of numbers to crunch, by using instruments to measure all the variables mentioned above at numerous spots along the Texas coast.

Cerebral anglers know this and maintain a regular vigil on the websites, internalizing the information as it accumulates over time. They look at stats not only prior to outings, to make choices about where to fish, but also after outings, to analyze events for future reference.Significantly, anglers can generate a much clearer awareness of exactly how a 20-knot wind feels and how it affects a particular place, if they can see in plain numbers the condition they experienced measured precisely to those dimensions. Looking at what happened with the wind speed and direction and sometimes water and air temperatures refines their sense of what conditions enhance and eliminate potential productivity.

Fishing guides and tournament anglers run high risks of finding themselves trying to catch fish in conditions most would consider beyond the margins of acceptability. We get “caught out” by unexpected negative turns in the weather and work to cope with them as best we can. This helps us develop a better sense for which kinds of extremes can prevail without completely ruining the chances for success and which ones always (or almost always) break the deal and crush the hopes.

Over the years, I've developed a well-defined list of parameters which I consider too extreme to allow for reasonable potential success on fishing trips. Years ago, when fishing primarily in places where tidal movement strongly influences the catching, I came to understand the futility of efforts made with feeble or entirely slack current. Conversely, I also recognized how water flowing too fast over shallow flats can stir up sand and mud and create turbidity levels which stifle potential. More recently, I monitor tide levels and adjust the specific locations where I make my efforts, depending on how much water covers the flats, since I usually fish in a shallow, hypersaline lagoon, with minimal predictable tide movement.

I also closely watch wind speeds when assessing the potential for an outing. Sustained winds blowing at or above 20 knots generally create a negative scenario, especially if they have blown for a while before the start of the outing and stay at those speeds throughout. Surely, a lull of a few hours in which the velocities fall down to 15 knots or less will provide a chance of making some things work.

All of this depends, of course, on which direction the breezes blow and what kind of fishing one could expect to encounter in areas lying in the lee of a land mass, protected from the negative effects of the winds and their associated wave action. If I've caught fish regularly on recent outings in a place well-protected from winds of a particular direction, my sense of the deal-breaker velocity will go up some. Certainly, I don't leave the dock if the forecast shows sustained velocities of 25 knots or more, regardless of the direction.

Since they occur after the passage of cold fronts, strong northerly winds damage the potential for catching not only by making the physical processes of casting and presenting lures more difficult, but also because they normally blow while water temperatures fall rapidly.

Descending water temperatures generally cause fish to become lethargic, often sending them into deep holes and basins, where they sit on the bottom for a while, inactive. Typically, I don't place much stock in making outings when water temperatures dip much below 50⁰F, especially when the water first falls to those temperatures during a cold season or frontal event.

When air temperatures hover in the 40s and water temperatures dip down around 50, wind speeds of more than about ten knots will make staying warm while wading nearly impossible.Light winds blowing through cold air over water of about 50⁰ create a slightly better situation, one with enhanced potential in situations where the conditions have moderated from greater extremes. Consequently, I will venture out with high hopes when water temperatures rise from the mid-40s into the high-40s, if warming air temperatures and light winds occur at the same time. In some of those situations, catching monster trout becomes quite possible, even likely.

Big trout often feed vigorously during the hour or so immediately before, during and after the passage of a strong cold front too. Fishing in the right places during the wind shift can produce memorable catches for brave souls prepared to deal with the aftermath of the event.If the forecast shows a front passing over the waters late in the morning on a given day, for instance, I can justify heading out and fishing up to and through the big change, figuring we will get in a full day if the prediction holds true. Often, this plan pays off handsomely, provided we prepare and equip ourselves properly for the chilly boat ride home.

Part of this preparation involves staying out of places which will put us in harm's way once north/northwest winds crank up in earnest after the front arrives. One should not attempt to cross deep, open waters in such a situation, so planning on fishing in places which offer some protection from the winds and from which one can return to the dock without crossing long stretches of the main bays becomes critical. A similar reality arises when ominous, dark clouds approach over the horizon during the warm season.

Thunderstorms certainly smash the hopes of all anglers. Waving a graphite rod around in the air under electric clouds makes no sense whatsoever! When a forecast calls for a high likelihood of thunderstorms occurring, I generally see it as a deal-breaker and cancel plans to fish. Unfortunately, forecasters often fail to recognize the potential for strong storms developing and provide false hopes for an outing, and we find ourselves on the water facing the threat of severe weather. In months like May and June, such scenarios occur with some regularity, but they can certainly happen in any warm month.

No sane angler should attempt to fish through a rain event which produces lightning; doing so risks life and limb. Running from a storm in the boat can also place a captain in dire straits. I prefer to wait out strong cells sitting on land if possible, placing my profile as low to the ground as I can. I will only choose to try and outrun the wall cloud back to safe harbor if I can do so while passing through water less than about three feet deep. Neither I nor anyone else should attempt to cross deep, exposed basins in the main bays while trying to stay ahead of the gnashing teeth of gnarly purple vapors.

I've been caught and engulfed by monstrous cells numerous times, with the throttle of my outboard pressed fully forward, racing along at over 50 mph. This isn't particularly dangerous in shallow water, but out in the middle, such a race can rattle one's bones and sink more than hopes. This scenario, perhaps more than any other, requires all competent captains to remain cognizant of the tangible dangers inherent to navigating the waters of our estuaries.

Most decisions related to extreme conditions do not carry such heavy weight; they relate more to the possibilities for catching some fish, not to survival. All the aforementioned elements can become harsh enough to squelch the legitimacy of an effort, including excessive turbidity, extremely strong or slack tides, bulging bull tides and scratching low ones, but stout winds and bitter temperatures most consistently snuff the deal.

In many situations, particularly during the colder half of the year, a combination of the wind and temperature elements combined with recent pattern trends create a clear picture of potential productivity. All competent captains monitor these elements on a regular basis, and have an active awareness not only of how various conditions impact their efforts, but also of when they render those efforts essentially futile. This knowledge allows them to operate safely and productively and to keep the fun in the fishing.