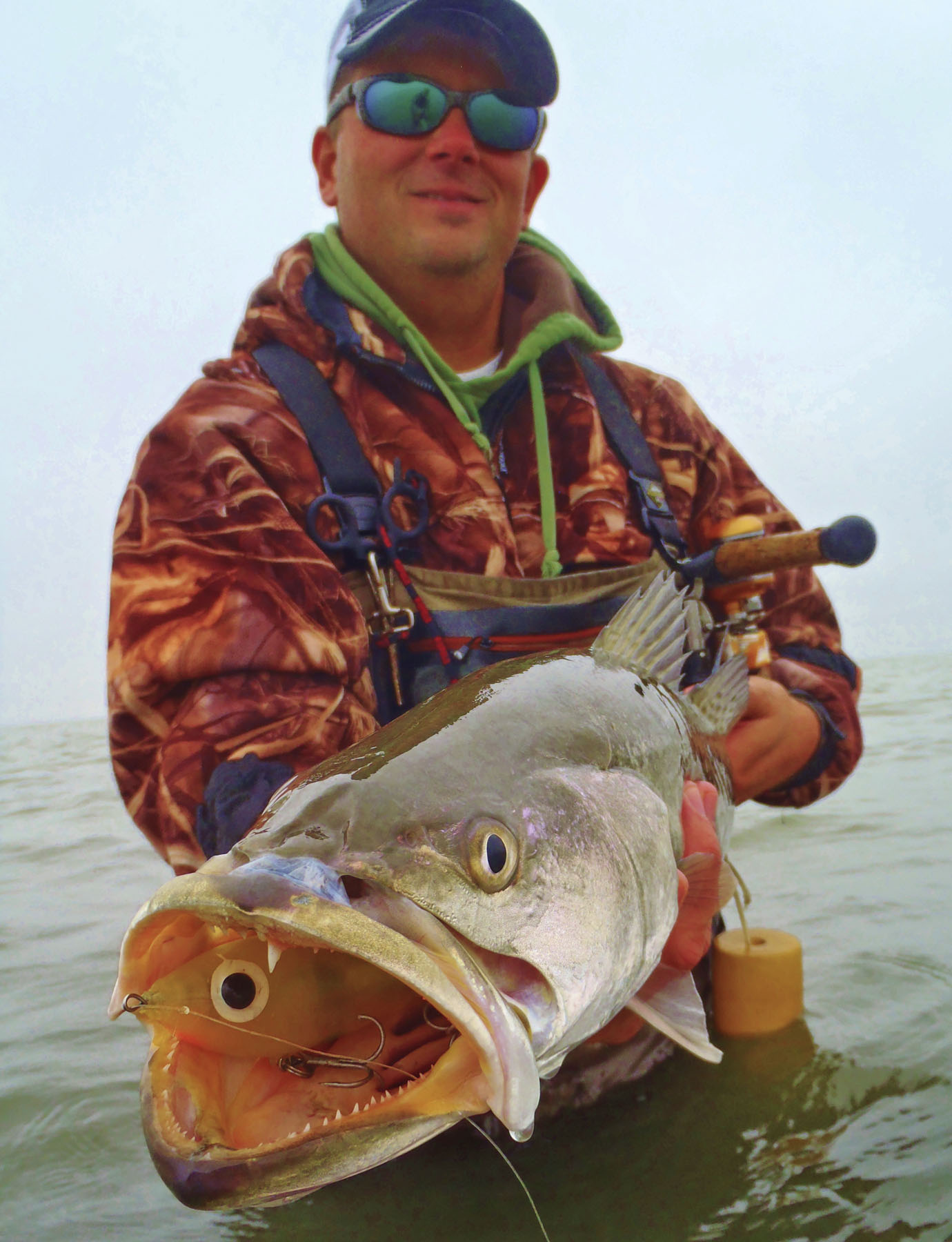 While fishing in early December last year, the author and Jason King found a bunch of hungry trout eager to attack sinking FatBoys.
Two integrated skill sets affect the ability to catch fish consistently. One involves locating fish, the other relates to the physical aspects of making fish bite. Using natural "bait" makes the connection between the two sets simpler, since anglers using bait can generally assume fish in the area will bite what's offered. On the other hand, using artificial lures blurs the connection, making consistency of outcome more difficult to achieve.

Light-tackle angling with artificial lures shares many common attributes with other "sports." For one thing, some people have more talent for it than others. Most of the time, the word talent describes physical abilities, athletic skill. Here, I use it more broadly, to include cognitive abilities too. Angling talent might more accurately be described as an "acumen", or keenness in depth of perception, discernment, or discrimination.

A person displaying superior angling acumen shows a consistent ability to correctly analyze numerous variables and locate fish. Furthermore, they can also identify what strategies, methods, lures and presentations will likely work to catch those fish, and they possess the necessary skills to execute the strategies and presentations effectively. Some expert anglers display a higher acumen in one of these areas than in the other; the best display freakishly strong abilities in both realms.

In other words, the most consistent anglers know how to add up the factors and figure out where to find fish, and they know how to target and catch those fish once they are found. That's where the connection between the two skill sets comes in; catching the fish verifies their presence. A person who correctly identifies where to fish but who can't make fish bite consistently will become confused or frustrated, probably both.

Surely, some physical aspects of angling talent come into play in this equation. The ability to cast well, to control the movements of the rod and coordinate the efforts of both hands simultaneously all play a part in angling excellence, as do basic assets like adequate stamina, vision and hearing. Most anglers have relatively similar abilities in these areas, and many can function well enough with the equipment to catch fish once they are located and targeted with appropriate methods.

Helping people improve and/or master the skills associated with the physical aspects of lure fishing proves much simpler than teaching them the other skills which play a part in consistently finding and targeting fish. In essence, fishing guides who specialize in lure fishing play the role of fish-finder and strategist for the angler(s) who hire them; they make all the decisions leading up to the physical act of trying to catch the fish, then coach the angler(s) as they attempt to seal the deal.

In order to consistently succeed in the effort, a fishing guide or expert relies on three different thinking modes or abilities: instinct, intuition and intelligence. At least, this appears so superficially, though analysis of each of these modes indicates one supersedes the other two a vast majority of the time.

Instinct can be defined as natural or inherent aptitude, impulse or capacity. It drives behaviors mediated by reactions below the conscious level. Often, when describing an expert angler, one tends to declare "he has good instincts for fishing." In essence, the term instinct relates quite closely to the term acumen, in that it either exists within a person or doesn't. People can't work to "increase the intensity or quality" of their instincts. By definition, this trait exists below the conscious level, so it can't be actively developed.

How then, does instinct come into play in the sport of lure fishing? In my estimation, it involves what I call "feel". Sometimes, when assessing a situation, the angler either "feels it" or doesn't, meaning they believe some area or spot either does or does not hold fish at the time, and/or that those fish can or cannot be caught with a particular strategy, method, lure or presentation. I know people who appear to have extremely acute, useful instincts when fishing. In some cases, I've learned to accept what they "feel". If one of these experts tells me, "I'm not feeling it", I just accept it and move on to some other location and/or plan.

I only rely on a person's instincts if I have knowledge of them being accurate enough times. Until I have such knowledge, I place little value in what a given angler feels about a situation. I also don't place much faith in the second thinking mode–intuition, though I can think of one way in which it comes into play on a regular basis in fishing. This mode, defined as the power or faculty of attaining to direct knowledge or cognition without evident rational thought and inference can also be described as "quick and ready insight."

I regularly experience what I would call intuitive insights when fishing. Most often, the experience involves "knowing" I am about to get a bite before it happens, when I can see no tangible evidence to indicate it. When this happens, it never proves false. I never truly "know" a bite is imminent and then turn out to be wrong. I simply become aware of what will soon happen, and then it happens.

Of course, these events cannot be manipulated consciously. One cannot predict when and where they will happen. So, they really have little or no use in the quest for consistency, except that the intuition of a coming bite accentuates focus in the short term. When the feeling comes on, it causes one to become hyper-focused on the task at hand, until the bite occurs. In that sense, intuition aids one in the act of catching. But, since it cannot be repeated consciously, it carries no lasting value.

The last thinking mode does, of course, have lasting value, and it is the most important element of angling consistency. Intelligence can be defined as the ability to learn or understand or to deal with new and trying situations....the skilled use of reason...the ability to apply knowledge to manipulate one's environment. Almost every angling decision emerges from "fishing intelligence."

An angler adds up data constantly in an effort to determine when, where and how to attempt to catch fish. Every fishing situation has unique components, but all situations also bear some similarities and parallel structures. Locating saltwater fish consistently requires the correct identification of the relative levels of significance of many environmental variables, including the season, time of day, weather, tide level and/or movement. Additionally, locating fish consistently involves making accurate assessments related to the observations of signs which correctly indicate the presence of the targeted fish, including verification of prey species or food sources, indicators of fish movement, like swirls, mud boils or wakes, and the activities of other creatures like birds and porpoises.

Reading the signs related to bird activity, for instance, can resemble instinct. Sometimes, birds generally seem active, spurred by an underlying high level of activity in the animal kingdom. The ability to perceive some subtle forms of these signs can seem like a "feel" thing, but is actually learned behavior. In other words, the perception comes from data added up over time–through intelligence.

Intelligence comes into play in the last part of the equation leading up to the final act of making a cast and presentation. When deciding whether to drift, anchor or wade, where specifically to start the effort, whether to stand in place, move slowly and steadily, or make a quick sweep, which direction to move and cast, what lure to throw and how to present it to the fish, an angler uses fishing intelligence. The powers of reason and memory most profoundly affect all these decisions; they are made consciously, through cognition, not by instinct and intuition.

In the end, consistency results from correctly identifying the variables and strategies which lead to positive results, so they can be relied upon and implemented again. Also, consistency comes from the ability to identify specific mistakes which hamper the effort to either locate or catch fish, so those negative components can be eliminated instead of repeated. Identifying and eliminating mistakes can prove difficult indeed.

Often, after a failed fishing endeavor, anglers wonder, "Why didn't we catch more (bigger) fish?" They don't know why, and they can't even come up with a solid, educated guess. An important question arises: how can one reduce the risk of such events occurring?

The answer goes back to some basic concepts I've stated and written repeatedly. The truth, after all, does not change, simply to keep us amused. First, one should always develop a plan before embarking on an outing. One should attempt to "fish the plan," but should also be open to adjusting plans according to specific perceived needs while on the water. In fact, any plan should include contingencies from the start.

If one fishes from a plan and to a plan, one has a better chance of identifying what worked and what didn't. This brings the second truth into play. One should record data related to the fishing efforts, so the analysis of accurate data becomes possible over time. By recording data, I specifically mean maintaining a fishing log which includes as much information as possible. I have provided a template to use for a fishing log on my website at CaptainKevBlogs.com.

By doing these things--formulating a plan, fishing the plan, recording the outcome and analyzing data over time, anglers can improve their fishing intelligence. I have here stated, and will repeat--some people have more talent for fishing than others. Experts universally possess a high fishing acumen. More importantly, they continually use disciplined methods to improve their skill sets.

Beginning and novice anglers run the risk of assuming the experts they encounter possess some kind of wizardry, or magic, when they really don't. Things which seem like sharp fishing instincts are actually highly developed skill sets. Fishing intelligence is more learned behavior than endowed gift.