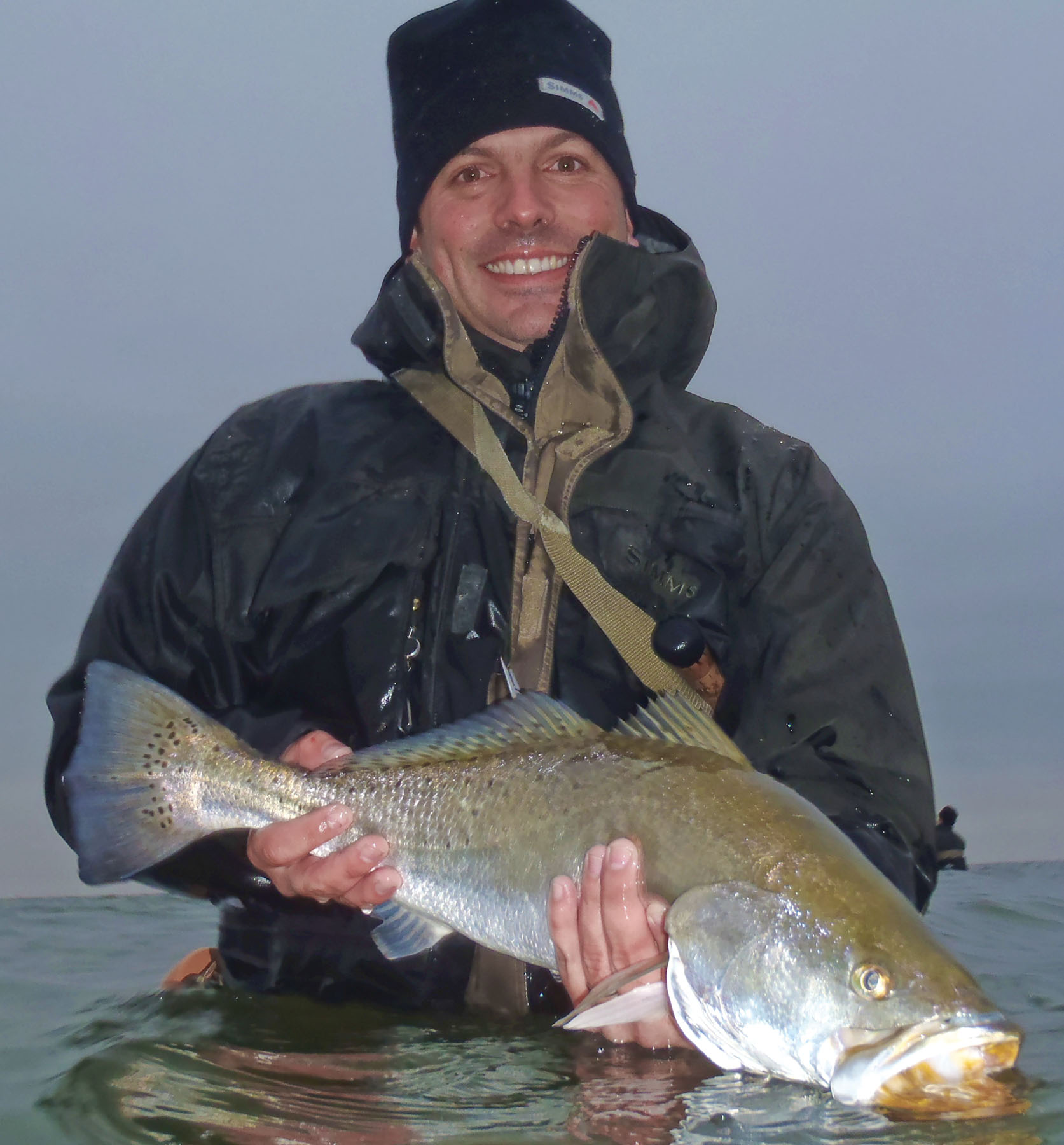 When searching for an area in which to fish, novice anglers often look for "pretty water". If strong winds significantly muck up most of a bay system, such a plan may be necessary and correct, but much of the time, hiding from the wind and fishing the cleanest water around isn't the best idea. Embracing the breeze and fishing windward shorelines and structural elements often produces a better catch.

Windward shorelines frequently hold more fish than leeward ones. This is particularly true if winds are light to moderate, and the bottom on those shorelines is firm or grassy enough to prevent excessive turbidity from occurring as waves roll into the shallows. Hard sand, rocks, shell and grass all help water on windward shorelines remain clean, in some cases, even when wind speeds exceed twenty knots.

Wind blowing onto a shallow bank elevates oxygen levels in the water and may positively influence activity in the food-chain. While I don't really believe in the concept of bait being "blown onshore", I do recognize the increased activity level of many organisms along windward shorelines. Certainly, when water temperatures are in the moderate to high range, adding oxygen to the water is helpful in creating and sustaining feeding activity.

Even when the bottom along a shoreline is softer and more susceptible to turbidity in windy conditions, the catching in the dirty water can be better than on the opposite side of the bay, where the water is likely to be cleaner. Astute anglers who have located fish on windward shorelines prior to a breezy period will return and attempt to catch those fish even after the water loses clarity. Deploying loud, flashy and smelly lures often aids in this endeavor.

Extremely cold conditions are probably least conducive to fishing main shorelines on the windy side of a bay. Leeward shorelines and coves along those shorelines generally hold warmer water in such conditions, because the wind blowing off a shoreline has less effect in turning the water over. Calmer water stratifies better and remains warmer at all depths when temperatures plummet. If water temperatures dip down into the low fifties or below, these insulated leeward areas will often concentrate fish as they migrate toward the relative safety of the warmth.

Sometimes, this effect takes a while to unfold, particularly on Upper Coast bays in Texas. While pre-front onshore winds fill the south shoreline coves of these bays with relatively warm water, predators sometimes follow the bait into them. As a cold front arrives and winds shift to the north, tide levels temporarily rise even higher in these pockets, filling the coves with moving water and rolling waves.

In this situation, predators seem to sense what is coming and are motivated to take advantage of a fleeting opportunity to feed, before fleeing the shallows as tide levels and water temperatures drop under the prolonged influence of the post-front winds. Short-lived, intense frenzies can occur in these shallow, windward areas when fronts first blow in and the tide is temporarily lifted; anglers who embrace the moment and use the breeze to their advantage can be handsomely rewarded if their timing is good.

Fishing the windy side of smaller-scale structural elements is often wise too. The windy sides of coves, sand bars, reefs, spoil banks, jetties and other such features often hold more fish than the stale, calmer water in the lee. This can be particularly true if winds are light, as such conditions normally create especially stagnant conditions downwind of places like these. Of course, the veracity of this generalization can be trumped by other variables, such as the layout of bottom structures and cover elements.

If the lee side of a reef, for example, has a gentle slope with scattered shell reaching out into a muddy bottom, while the windward side has a sharper drop off and little or no shell extending past its edge, the fishing on the lee side might be better. Similarly, if the fish are preferring water of a particular depth, and the water on the windy side of a structural element is too shallow, fishing that side will be futile.

If other factors are basically equal on both sides of a structural element, fishing the windy side is normally a better strategy, but executing the strategy isn't always easy. Light wind speeds help make fishing the windy sides of things easier, while increasing wind speeds introduce difficulties. For instance, if the water is of marginal depth for wading on the upwind side of a reef or sand bar, strong winds will make it tougher to get far enough away from the edge of the structure to make proper and effective presentations in the key zone.

In some scenarios, the water upwind of the desired target zone is entirely too deep for wading, making it necessary to use the boat as a casting platform. The boat will always be easier to control if winds are lighter, and the noise created by waves slapping against the hull will be minimized too. When attempting to figure out the best way to work the windy side of a bar, spoil, ridge, jetty or reef, anglers should remember another truth related to dealing with the wind.

Casting crossways to the wind generally makes for better presentations than casting directly with or into it, especially as wind speeds reach and exceed about fifteen knots. Often, I see novice anglers allowing strong winds to dictate various aspects of their strategies. These negative effects include speeding up their movements in a straight line downwind when they are wading, and encouraging them to make all their casts in a line directly downwind.

An angler walking quickly through an area and making long, downwind casts has less chance of locating fish than one who zig-zags through the same area, making casts at various angles to the direction of the breeze. These issues are most important when twitch baits and floating plugs are deployed; presentations with these lures are more lifelike and erratic when made crossways to the waves. Soft plastics, whether fished with or without corks, can be more effectively deployed on casts made straight downwind, since the movement patterns of those lures are more vertical than horizontal.

Regardless of what lure is used, anglers working the upwind side of structural elements will usually benefit from staying away from the edges of those features and casting sideways toward them. Ideal casts will cause the lure to pass through the attractive zone close upwind of the structures and stay in those zones for as long as possible, all the while moving in erratic and enticing ways. Wading closer to the structure and casting directly downwind to keep the lure in this zone longer can be a bad idea, as it will cause a wading angler to walk through the fish, or will place the boat too close to the fish if it's used as a platform.

If the water is marginally deep out on the windy side of the bar, windy conditions will make it harder to wade out there, especially when waders are necessary. Wearing a waterproof jacket on the outside of the waders can allow one to more comfortably cope with the waves in this scenario. I know many people stuff their jackets inside the waders, but doing so gives rogue waves easier access over the top and into the bottom of the outfit!

Properly embracing the wind and taking advantage of how it stirs things up in a positive way means using the right gear and making good choices. Certain lures help one take advantage of windy conditions. Conventional topwater plugs, particularly noisy ones like She Dogs and Skitter Walks, can call up fish in sloppy waters, especially during spring and summer.

Prop-baits and chug baits work well in big waves too, making lots of slushing noises while starting and stopping, helping fish locate them and giving them ample opportunity to take them when visibility is poor. Dangling a soft plastic worm behind a floating plug like these can be wise too; dangling one under a rattling cork is another proven tactic in windy weather and/or dirty water.

If soft plastics are deployed without corks, smelly ones can make more sense in windy weather, if the wind is reducing the water clarity. Paddletails, with their vibrating qualities, normally work better in dirty water than rat-tailed worms. However, if the water is clear, the more erratic movement patterns of the rat-tails are desirable, even if it's windy.

Similarly, if windy conditions create lots of turbidity, bright, shiny, noisy twitch baits often produce more bites than more subtle and quiet ones. The Catch 5 is my favorite loud, flashy twitch bait. I won't generally favor one over a Corky or Fat Boy until visibility is reduced to less than a foot and a half, though.

Catching fish consistently on artificial lures in windy conditions means choosing plugs with the right attributes for the situation, but optimally embracing the breeze involves much more than astute lure choice. Using the wind to enhance the catch (rather than allowing it to reduce the catch) first and foremost means confidently choosing the right general area in which to make the effort, then focusing on the most productive portions of the area while executing effective strategies and finally, properly presenting appropriate lures to the fish.