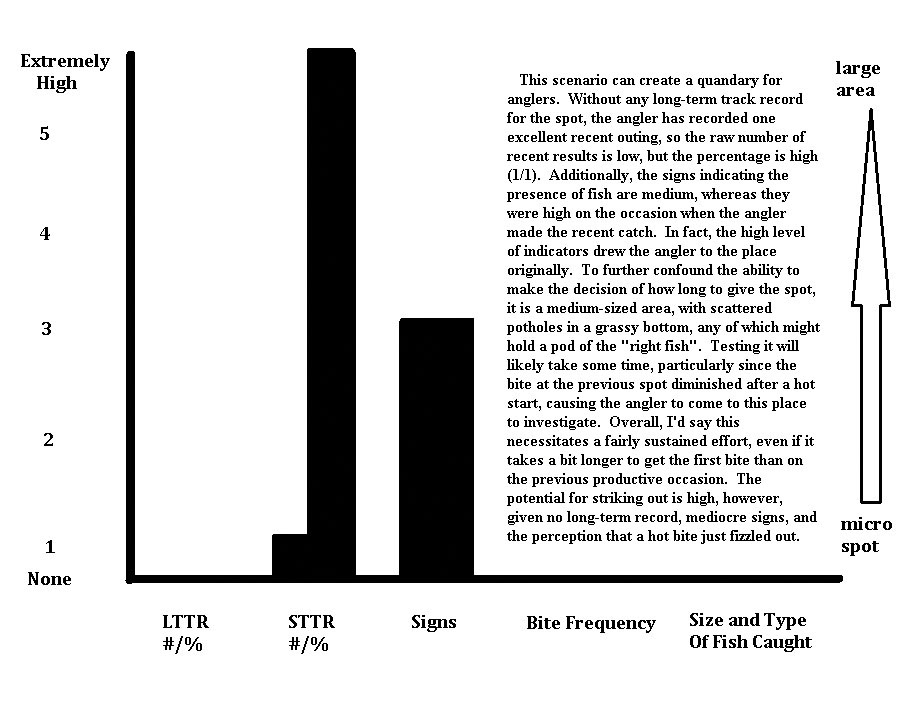 In previous documents, I've listed and explained the relevance of five factors which affect the critical decision related to how long one should stay in a spot before moving on. I now realize I've neglected to mention an additional component which influences this judgment–the type and size of spot chosen. In some situations, incorporating this important sixth factor proves easy, but in others, complications arise.

Ideally, a lure-chunker (particularly one who chooses to wade) considers all of the following when making a decision about staying put or moving to a new location: the type and size of spot chosen, the long-term track history of the spot, its recent track history, observations which indicate the presence of fish, the frequency of bites and the type and size of fish caught. In a perfect world, ample data makes the decision easy. Of course, we don't live in a perfect world.

For many, the dilemmas generated by our wicked world start with insufficient long-term and recent data about the spot's production. Fishing frequently and recording relevant details prove the only way to rectify such problems. Certainly, the more times one fishes a spot with a particular set of environmental variables in play, meaning wind speed and direction, air and water temperatures, water quality, tide level and movement, etc., the better the odds of staying in the spot for an appropriate amount of time.

Easily catching fish which meet or exceed the expectations of the moment renders the need for making a decision obsolete. Everyone knows not to leave fish to find fish if the fish are in fact the "right" fish, meaning they are both the right species and size. Most of the time, though, the catching proves less than ideal, and the fish caught aren't the right fish, at least not immediately, especially when anglers target trophies. Consequently, captains who target unusual specimens must constantly reevaluate their choice of spots and regularly make decisions about staying in place or moving. Those who most often make good judgments when they aren't catching the right fish perform better over the long haul.

Doing so usually necessitates consideration of the type of spot chosen. Spots show variability not only in their physical size and other attributes, but also in their tendency to produce the desired fish at a particular rate. The size, layout and expected level and rate of productivity of the spots affect the decision related to the amount of time appropriate for testing them. Obviously, small spots with specific structures known to regularly hold fish take less time to test than larger areas like flats or shorelines, which might have spacious areas with similar depths and features.

In a substantive way, consideration of the type of spot targeted closely relates to the consideration of the other five factors. Anglers with more experience fishing their spots will find the judgments easier to make, since they have more data on which to base the decisions. The perception of what to expect when a spot holds the right fish becomes clearer the more times the angler tests the spot with a specific set of environmental variables in play.

A high level of experience and ample data tend to generate expectations which align properly with the potential of each spot. Of course, these expectations depend not only upon the specific physical layout of the spot, they shift with the seasons and at different times of the day, also with the turning of the tides and subtle changes in weather. Anglers must consequently add up a fairly long list of things when deciding how long to give a spot after making a decision to try it.

If conditions conspire to render the catching extremely difficult, fishing in and around small-scale, fish-holding features, or micro-spots, makes sense. Generally, standing and pounding something extremely likely to hold a few fish in tight spaces, rather than wandering around searching for scattered fish proves more productive in tough bite-situations. One might probe such a micro-feature for quite a while during a bad lull in the bite, particularly when clearly seeing fish. But without clearly seeing fish and/or getting bites, one would not linger long when conditions indicate a higher activity level in the fish, which would elevate expectations about the ease of catching.

Take, for example, a spot which holds two small rocks lying close together on the edge of a shallow sand bar next to deeper water, with fairly long rock-free stretches of the drop-off on both sides of the two structural elements. The nature of the spot dictates something specific about its general potential in a relatively easy bite-situation.

Normally, fish congregate around the two rocks. An angler who knows this will set up the wade to quickly probe the waters around the boulders, adjusting lure choice and presentation to match the time. If the bites don't come quickly once several casts have placed the lures close to the fish-holding structures, a change to presentation and/or lure choice might certainly be justified, particularly if signs like nervous bait, swirls, wakes and mud stirs indicate the presence of fish.

Within a relatively short time, though, bites will happen, or the astute angler will move on. This rings especially true if previous trips to the place almost always resulted in quick and easy catching around the rocks. If the good catching at the spot usually occurred with a flurry of bites once the right lure began landing around the fish-attracting features, the angler should reasonably expect to mimic those results. Ironically, quick and easy catching might also render the spot obsolete.

A spot with a small fish-holding feature can produce well, then become temporarily useless, because it does not hold enough fish to justify longer efforts. If an angler makes all the fish (or a large enough percentage of them) found in a small area take a bite, the area will need to "rest" for a while, to allow its potential productivity to rise again. In a situation like the hypothetical one I described here, a quick check of the surrounding area, particularly the same depth of water along the edge of the drop-off holding the two rocks, would make sense, especially if one has caught fish along the edge before, in similar conditions, after catching some easily on the rocks.

If moving a short distance away from the rocks does not produce more bites fairly quickly, making a longer move to another similar spot with rocks in the same depth of water would make more sense than wandering aimlessly off from the spot. In bays without rocks, anomalies in reef systems, small drains leading out of marshes, dead-end guts, sweet spots along shorelines and other small-scale features can produce in similar fashion, necessitating quick checks in good conditions, while offering potential for scratching out a few bites in really tough ones.

Conversely, larger spots with lots of similar depths and bottom features will require longer amounts of time to properly check, becoming difficult to assess in mediocre conditions and entirely useless if conditions make getting bites tough enough. A flat stretching for several acres, holding water of similar depth, over large expanses of similar cover elements on the bottom likely creates a fishing situation which will force an angler to move around for a while in search of bites.

One who chooses to fish such a place should likely do so in medium to good catching conditions, particularly if historical results verify the catching of the right fish despite a low number and frequency of bites over relatively long stretches of time. The amount of time devoted to such an effort should likely decrease as bite conditions worsen. In a situation with mediocre bite conditions, it might pay to give such an area a try, limiting the effort to a relatively short time, as compared with the average amount needed to get a bite from the right fish. Obviously, if catching the right fish requires a slow, steady, sustained effort even in good catching scenarios, one should not really expect to make it work in a really poor one.

For the angler, appropriate expectations provide the key to consistency. The levels of expectations with regard to the ease of getting bites and catching the right fish constantly evolve in conjunction with the factors affecting these things. Bite stimulators like dawn and dusk, rising and setting moons, turning tides and changes in weather take effect, then slip away. Astute anglers keep tabs on such things and adjust their expectations to fit the moment, either consciously, or more intuitively.

Inevitably, the most productive anglers show versatility and creativity in their adjustments to location, lure choice and presentation. This versatility arises from a keen perception of the need to evolve and respond to constant, sometimes subtle changes in both environmental conditions and the subsequent reactions to those changes in the fish, specifically in their feeding mood.

For some, the nature of appropriate reactions by the angler might seem counter-intuitive. In an easy bite-situation, productive anglers generally choose to cover larger spots holding multiple productive micro-spots, moving through those areas in a slow and steady fashion, adjusting lure and presentation fairly often, in search of the easiest, most productive catching system for the moment. They will likely spend less time working such areas in mediocre and poor bite-conditions.

When the bite-situation deteriorates, these same anglers often narrow the scope of the spots they target, moving less through the water, even standing still and casting at the same small feature repeatedly, changing lures less often, or not at all. In extremely tough conditions, they'll spend far more time targeting a micro-spot than they would in good conditions. Of course, most fishing situations fall somewhere between the two extremes, as do the choices and strategies of the anglers who readily acknowledge this fact. Appropriate adjustments to the type and size of spots targeted and to the amount of time allotted to test them aid in the eternal quest for consistency.