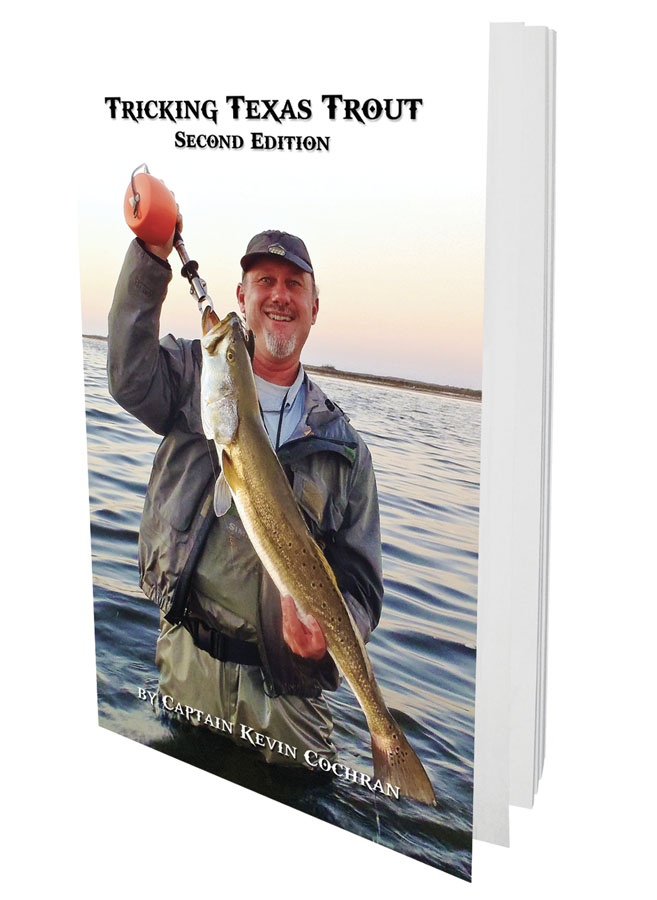 Predictably, autumn winds whistling in my window screen spin my thoughts forward, toward the year's end. A cool edge sharpens the breeze, transforming my desire to catch monster trout into a fever. Historically, the last month of the year produces numerous photo opportunities for me and my clients.

Long ago, trophy hunters recognized the connection between the winter holidays and the chance of catching the trout of a lifetime, while dreams of rutting bucks and circling bull sprigs distract others from our favorite pursuit. Deer, duck and dove seasons present hunters with opportunities to enjoy time in the fields, forests and marshes. Consequently, those of us who single-mindedly pursue one aquatic species find our waterways largely deserted. The freedom to move around and try various sweet spots within well-proven areas increases our odds of finding the schools we seek.

I enjoy spending time on December's relatively uncrowded bays. I've kept detailed records on charters over the last six years, documenting outstanding average results per day of effort this month. The production of trout measuring or exceeding twenty-seven inches and of those weighing seven pounds or more rates nearly as high as in other prime months like March and April. We've caught some truly memorable specimens during the first of Jack Frost's months.

Despite these statistics, my schedule rarely fills out as much as I'd like, so readers who want to get in on the potentially productive action should not hesitate to call or send an email! I almost always have days open as the year draws to a close. While autumn gives way to winter, bright lights twinkle on the eaves, leaves change colors, average daily temperatures decline, and my excitement level ironically rises. I look forward to this coming "trophy trout season" with eager eyes and a hungry mind.

The consistency of the trout fishing throughout this summer and fall contributes positively to the anticipation I feel. Numbers of trout in general and numbers of big fish have remained steadily high throughout the hot period. Some years, during the latter parts of summer and into autumn, lure chunkers catch bazillions of dinks, with only a low percentage of keepers and scant few picture fish sprinkled in. This year, pristine ocean water flowed south and east into the Upper Laguna Madre, covering the flats with clear water, spurring an upturn in immediate results and offering the promise of prolonged productivity.

Trophy hunters should regularly experience stellar outings once water temperatures drop low enough to cause schools of big trout to gather in predictable places. Both people and fish travel to familiar locations while Christmas carols resound in the halls and bells ring in the New Year. Savvy trout hunters have long known where to go when looking for huddled up trout during the cold season. Some aspects of trophy fishing never change.

For me, one important thing did change this year. I worked long and hard to make improvements to my first book, Tricking Texas Trout, so I can release it for sale as a second edition. Looking back over the text proved challenging and enlightening for me; I revised the piece to make it more interesting and more relevant to current times.

Many of the concepts remain unchanged from the original text. Throughout the book, I altered the wording slightly, replacing passive verbs with active ones in many places, to enhance immediacy and better facilitate the creation of a mental picture in the readers' minds. Significantly, I modified some concepts and added in new ones where appropriate, mostly to reflect adaptations I've made to my beliefs and operating principles during the eight years since I published the book originally.

I now feel somewhat differently about some specific issues related to locating and catching trout, and have tweaked the book to reflect those beliefs. In order to help readers keep track of the changes, I used italics when adding in new concepts or significantly altering existing ones. In some sections, I injected more changes and new ideas than in others.

I referenced my relatively new-found love for shorter, lighter fishing rods, documenting the names and styles of the models I use today. I also revisited my earlier claims about fishing lines and rigging methods, to reflect my current beliefs about the superiority braided lines show over the mono-filament ones we used previously. In the time since I first released the book, mono-filament has largely gone the way of the dinosaur, and rightly so, though I still place a short piece of mono leader immediately in front of my lure, for reasons detailed in the second edition.

These days, I use some lures on a regular basis which I did not deploy during the time frame in which I originally wrote the book. I mentioned all these lures, detailing the reasons I've placed them in my quiver, giving credit to MirrOprops, MirrOminnows, Provokers and other plugs which have significantly improved my catch rates. Additionally, I discussed and described changes in my preferences for certain types of lures in specific situations.

For instance, I acknowledged my declining preference for large topwaters. Early in my career, I caught more trout over five pounds on full-sized Super Spooks than on any other lures. Though I still prefer them at times and still catch big trout on them, I now recognize the superior performance of smaller plugs like the Spook Junior and Baby Skitterwalk, particularly when used in hot waters. Not only do diminutive lures like these produce more bites, they require far less energy to deploy, and facilitate the easier production of fast, erratic and enticing presentations.

In addition to addressing modifications in my beliefs about lures, I refined and clarified my thoughts about other types of equipment too, including GPS technology and hydraulic anchoring systems, all with the goal of making the book better suit the needs of modern trout hunters. I'm hoping these revisions and additions will motivate readers to buy the second edition, even those who own a copy of the first.

I remain proud of this evolving piece. The completion and release of Tricking Texas Trout started me down a productive pathway, catapulting my creative energies. Feedback I received from readers about the ideas in the text played a big role in motivating me to create other products related to the sport of lure fishing for speckled trout.

Many readers commented about the character I created who speaks in the text repeatedly. The Phantom provides his thoughts and opinions about various topics related to the sport while he and the narrator share drinks in a smoke-filled tavern on North Padre Island. Over the years, many people have asked me to identify The Phantom, but I can't do such a thing.

An archetypal old salt, he has no proper name. A compilation of great anglers I've known and respected, a star in the game, he is neither real nor tangible. An imaginary character, he represents my alter ego and the ideal angler residing inside us all.

Talking to people about The Phantom fascinates me; I love the way the character piques their curiosity and provides an entertaining element to the book. I remember how the idea to sprinkle in comments from the the old salt between the informative chapters provided me a structural plan on which to base the text. Incorporating The Phantom helped me organize and execute the book.

For that reason, and because I wanted to take the entertaining components of Tricking Texas Trout to a higher level in the second edition, I added in new comments from the character and changed other aspects of his life and its end. In the original version of the book, I killed him off rather hastily, through the mere mention of a massive coronary attack. In the second edition, I've allowed him to develop some of his ideas more fully, and have treated his demise differently. I hope readers will enjoy my new vision of an old character and friend. I revere The Phantom; he takes on a life separate from me, even as he remains a part of me.

One dimension of my work as an artist continues to amuse me. I love going back to things I once considered complete and revising them. Polishing pretty things can make them shine even brighter, provided the polishing hand doesn't press down too heavily. With regard to written discourse, Ernest Hemingway probably said it best. A master of the use of direct and profound prose, he simply said, "Revision is the art of writing."

I completely agree, and I hope people who take the time to read the second edition of Tricking Texas Trout will find it thorough, informative and interesting. I enjoyed laboring to make it more clear, concise and revealing. The new book can be ordered electronically through both my websites, on the Captain Kev's Products page of CaptainKevBlogs.com and near the bottom of the home page of FishBaffinBay.com. It will also be available for sale at several retail locations, including Fishing Tackle Unlimited, Roy's Bait and Tackle, Rockport Tackle Town, Victoria Tackle Box and Marburger's Sporting Goods.