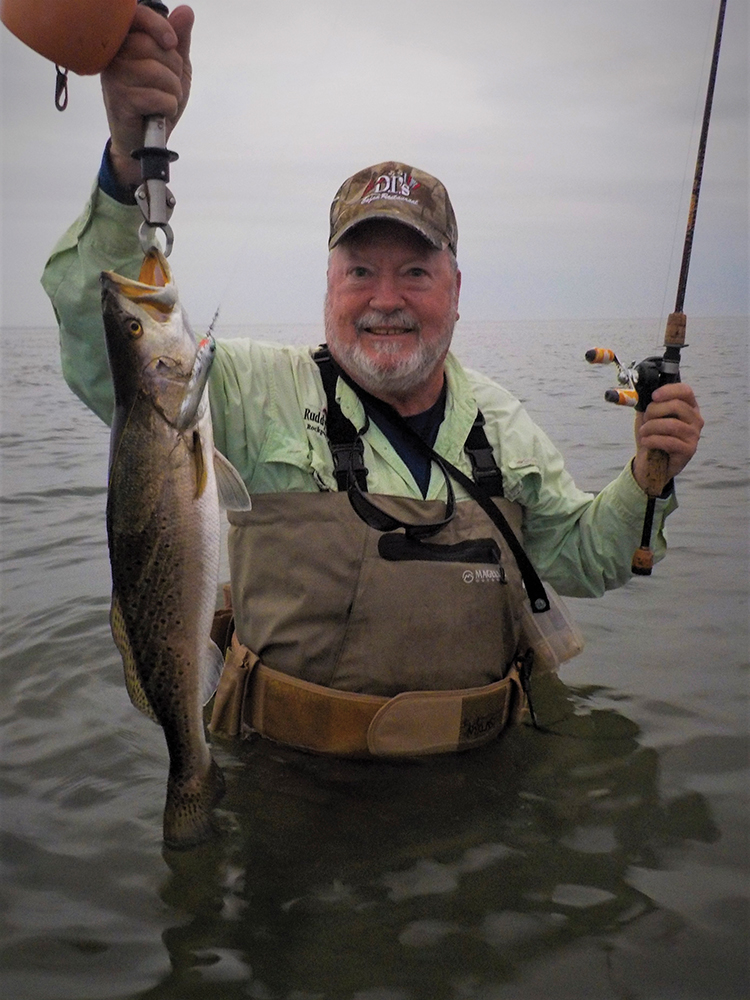 Bite continues steady for trout like this one caught by Pat Grant during recent days spent fishing the Baffin/ULM complex.

Several aspects of February weather patterns and their associated effects on marine organisms contribute to the perception of the month as a prime one for lure-chunkers targeting trophy trout in Texas. A quick check of the climate data for two cities helps generate a starting point for the discussion. I've chosen Corpus Christi and Galveston as the locations, one to represent the Upper Coast, the other the Lower Coast of the state.

In the case of Corpus Christi, my home city,  the month ranks as the third coldest, behind both January and December, with an average high around 70° F and an average low of approximately 51°.  These values sit about 11 degrees below the yearly averages. The case in Galveston differs slightly; on the Upper Coast, February ranks as the second coldest month, behind only January, and the average daily highs and lows fall 13 or 14 degrees below the annual norms.

For the sake of this discussion, averages do matter, and these facts help clarify one way in which February weather, when thought of in a generic sense, using long-term averages, affects fishing for trophy trout. Though February weather isn't the coldest in an average year, it does occur at the end of the cold season. Since this fact always rings true, a couple of related phenomena bear strong significance to anglers hoping to catch trophy trout during this timeframe. Biologists refer to one of these with the term acclimation.

Like humans, fish become accustomed, or acclimated, to various kinds of conditions over time, meaning they become more able to tolerate them without experiencing severe effects on their physical abilities. Certainly, fish become acclimated to cold water temperatures after the mercury dips low in the glass several times; by the time February rolls around each year, trout remain more active in cold water than they did in the previous two months.

Early in the cold season, starting from some time in November and lasting until the early parts of the new year, water temperatures dipping below 60° for extended periods send trout scurrying for the relative safety and warmth of deep channels and basins.  Catching them thus requires targeting them in those areas. The same truth does not apply nearly so well in the month of February, partly due to a second related fact about this month's weather patterns and their effects on coastal bays and estuaries.

In autumn, when water temperatures first fall into the 50s and 40s, the deeper parts of the coastal waterways hold warmer water than the shallower parts, on average.  Temperature changes take longer to reach into the depths, so the water in open basins, deep holes and channels retains the warmth of summer longer than water on shallow flats and shorelines and atop structural elements. Somewhere in the middle part of the cold season, this situation reverses itself, and by February, on average, the water in deeper parts of coastal bays runs colder than water in shallower parts.

This causes trout, especially big ones, to prefer spending more time in shallow water in the next-to-last month of winter. Because they're well-acclimated to cold temperatures by this time, this truth applies even in a February with below average temperatures, but it applies more in a warm one. Obviously, weather patterns don't play out in average scenarios much of the time. In fact, in the Lone Star State, Jack Frost overstays his welcome and lingers through February in some years, while the weather in the month feels much more like Spring Break in others.

On the Upper Coast, warm February weather generally proves more productive for anglers who wade. When the weather this month regularly feels like spring, trophy trout generally stay in shallow water almost all the time. Targeting them thus requires tactics which place anglers in their midst in places where most boats will barely float, and waders can walk around all day without wet knees. For people who know how to effectively execute strategies in these depths, this makes the fish easier to catch, as compared to targeting them in water too deep for wading.

In places like West Galveston and East Matagorda Bays, onshore winds associated with warm spells in February send tides rising and gushing into the shallow coves on the leeward shorelines. Particularly on the third or fourth day after the passage of a cold front, when water and bait fills these nooks and crannies, both anglers and the big trout they target will follow close behind.

In contrast, while colder weather prevails on the Upper Coast, targeting big trout in open basins remains a better choice. Any experienced, savvy Galveston angler knows the effectiveness of targeting trout around mud streaks in the open bay in winter. This relates partly to another aspect of the weather during this time-frame which affects the efforts of anglers targeting big trout.

The clarity of Texas coastal waters in February runs quite clear on average, affecting the feeding habits of large trout, which prefer eating finfish over crustaceans. Catching and killing a live fish requires the predators to employ different tactics than slurping up shrimp, causing the trout to prefer certain places and situations over others.

In areas with extremely clear water, trout will often favor the dirtiest water around, feeding more actively in places where their prey cannot easily see them. Big trout also tend to become more nocturnal in months like February, feeding best in low-light conditions or under a black blanket of darkness, especially in areas holding water of exceptional clarity. On the Upper Coast, this truth facilitates the efforts of anglers willing to wade reefs, coves and shorelines at night.

One of the prime scenarios for catching big trout on the Upper Coast in colder weather in February involves wading through dusk and into the night on a day when a strong incoming tide floods shallow flats and reefs for the first time after a front. On the Lower Coast, in a hypersaline estuary, where tidal influence has minimal effects, fishing at dusk in February for trophy specks can prove effective in cold weather too. In warmer weather, targeting giant trout in the shallows along shorelines from the end of the night into the early-morning hours also produces memorable catches.

In places along the west side of both the Upper and Lower Laguna Madres, this truth prevails strongly in years when the water clarity allows for reading a beer can on the bottom in depths of three and four feet. Large trout use the advantage of darkness to ambush their prey, becoming extremely difficult to seduce with a lure in the light of day, especially when skies run clear for extended periods of time. If brown tide, strong winds and/or freshwater runoff create more turbidity in the water, these same trout will bite readily during daylight hours, particularly when clouds obscure the sun for several days.

Generally, colder than average February weather favors fishing on the Lower Coast, where several long shorelines protect deep basins from the chilling effects of bitter north winds. Anglers wading shallow structural elements and shorelines close to those basins do well when the weather first makes a turn for the better after a strong frontal passage.  Since the fish have become well acclimated to the cold, they usually spend less time in a dormant state in response to falling temperatures than they had earlier in the cold quarter, biting vigorously when conditions moderate.

All these facts turn the discussion back around to one of the central concepts introduced above—February weather often proves unpredictable, and rarely plays out in close proximity to the annual averages. Astute trophy trout anglers realize this and adjust their strategies and plans accordingly. In warm weather, in water with moderate levels of turbidity, making sustained efforts on shallow flats and around structural elements during daylight hours will produce handsome results. In cold weather, with stupid-clear water, fishing structures and shorelines close to the edges of basins during low-light conditions or at night works better.

Regardless of the type of weather a particular February produces, another generalization about the month bears significance. Normally, the biomass present in a Texas bay stands low at this time, both in terms of general abundance and variety of organisms. In other words, trout don't have much choice about what they'll eat this month. In a place like Alazan Bay, this creates the most extreme scenario, one in which big specks choose from a short menu, offering primarily large mullet and small trout.

Because of the low levels of forage species, anglers can trick trout more easily into taking artificial lures this month than in those when all manner of life forms swim around in the bays. Anglers who achieve mastery of plugs which effectively mimic mullet and other small fish thus catch plenty of big trout in February, especially if they've put in consistent levels of effort leading into winter's last full month.

Normally, by this time of year, a fishing guide or trophy trout fanatic has developed a strong sense of where the big trout in his or her local bays have spent the winter, so targeting them generally involves making minor adjustments to location, strategy and presentation, with high levels of confidence related to the presence of fish. For all these reasons, the Valentine's Day month provides ripe opportunity to those of us who treasure encounters with fat, female trout and who are willing to adjust our schedules and habits in order to increase the likelihood of posing for pictures with them.