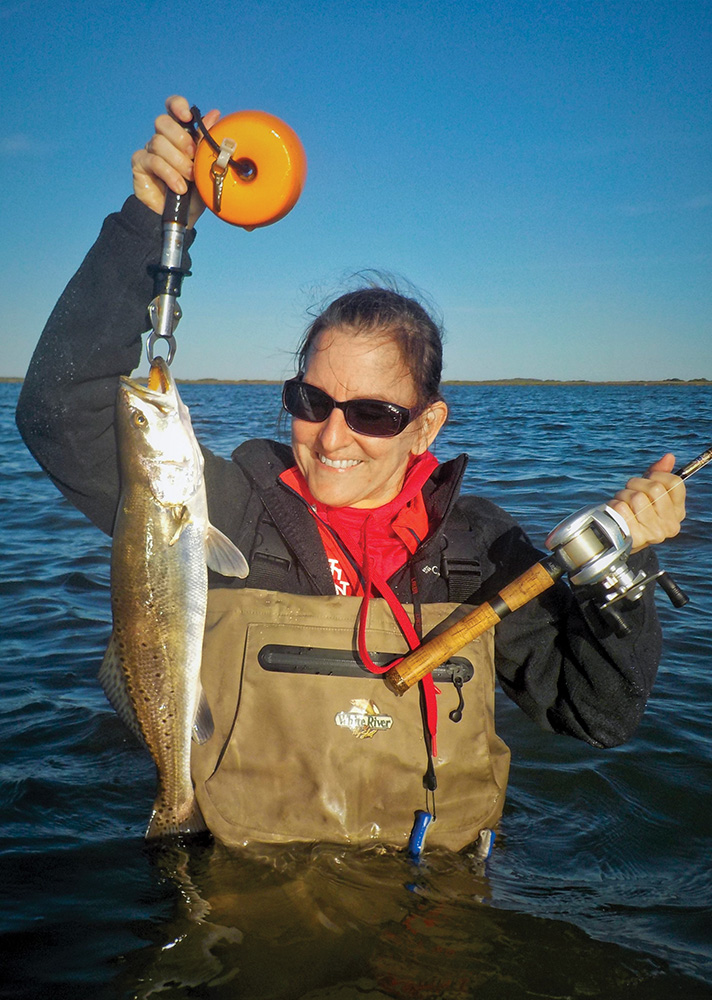 Jennifer Moorhead caught her personal best trout fishing with the captain in November.

As faint orange embers on the western horizon pay final tribute to a short January day, a solitary captain steers his boat through shallow water atop a sand bar lying close to the north shoreline of Baffin Bay. After anchoring the skiff, the gray-haired angler begins wading slowly toward the southern edge of the bar, casting around serpulid rocks lying in water slightly too deep to reach on foot. A light, brisk north wind tickles the back of his neck, whispering reminders of a recent cold front.

A short distance away, a younger angler stands on the edge of the same sand bar, probing the drop-off and depths immersing rocks lying to his west. He recognizes the weathered hull, faded jacket and tattered hat of the fellow to the east; the old salt holds a lofty reputation in the local fishing community. On the mostly-deserted early-winter waters, each gives the other ample room, content to chunk and wind in silence.

A blanket of darkness finishes its descent on the bay, and the younger angler hears the tell-tale splashes made by the old gent trudging back to his craft. Then a motor roars to life and purrs smoothly for a moment, before dying abruptly. When the captain turns the key again, the motor cycles repeatedly, but refuses to crank. Projecting his voice into the inky sky, the youth inquires, “You need some help?”

Sounds indicate a search through the boat's hatches before the old man answers, flicking his hat-light on and off to signal his exact location, “Looks that way.”

After tying the two boats side by side, the two make introductions and shake hands. The stranded one reports, “It's a blown coil. I normally carry a spare, but I used it the other day, and haven't gotten another. Used up all the spare fuses too. So, I'm stuck.”

“No problem. I'm on an overnighter with a friend. He's already back at the cabin in the Badlands. If you want, I can tow you over there. We have an extra bunk. We'll tow you back to the dock behind us tomorrow, if that's okay,” the helper reports.

The unfortunate one shrugs, “My momma taught me not to look a gift horse in the mouth.”

When the door of the cabin opens, warm air whooshes out to greet the rescuer and the rescued. Looking up from his task of tending pots and pans on the gas range, a third angler grins.

“Look what the cat dragged in,” the man at the door says to his friend. Out of the shadows into the lamplight steps the familiar fisherman. Shaking his head to show disdain for all the unsolicited attention, the guest sheds his jacket and hat, sitting down at a table next to the stove.

“How the hell did you convince a fishing legend like him to come have a drink with two weekend warriors like us?” the spoon-wielding chef asks.

“Poor fella's broke down. I offered to tow him in tomorrow.  Meanwhile, we can pick his brain for payment.” Both cabin-owners laugh.

“Serve yourself,” the cooking one directs the guest, indicating several bottles of liquor sitting in the center of the table. “Unless you want beer. That's in the cooler on the porch.”

The venerable angler pours himself a neat glass of whiskey and begins sipping. He mostly shrugs and grunts at the first few questions posed by his fishing fans, grudgingly verifying his training as a biologist, that he worked for Parks and Wildlife and the Coastal Bend Bays and Estuaries Program, acknowledging his career as a writer and teacher. Over time, the liquor warms his belly and loosens his lips, and the reticent one begins to elaborate more fully while giving his answers. Eventually, the cook finishes his work and the three share a robust conversation over steaks, beans and salads.

“We have a theory about why people don't catch as many big trout in familiar places as they did in the past,” the rescuing youngster says. “We think the fish have adapted by moving to other locations. Over the last couple years or so, we started fishing a bunch of new spots, and we've caught some pretty good ones in places we never heard of producing big fish.”

“How would y'all know what the fishing was like in those places in the past?” the scientist asks. “Maybe the fishing in them isn't as good as it was back in the day either. Since you didn't fish 'em, you have no way of knowing. I think you're relying too much on what I call the 'smart fish mantra' and jumping to conclusions without solid evidence.”

The chef grunts and stabs a bite of his steak with a fork, “Then how do you explain why people today aren't catching as many big fish in famous places as they once did?”

“I'd say the most obvious factor is increased fishing pressure,” the old salt answers.

“That's what we're saying. Too many people in well-known places make the fish uncomfortable, so they move elsewhere,” the rescuer agrees.

Shaking his head, the famous one pushes back, “That's not what I mean. I don't think the fish change their habits; I'd say most of 'em can't, because they wind up on ice. Over the last two decades, people got faster, more dependable boats, GPS and Google Earth. Years ago, places like Alazan and The Cayo seemed like they were way out at the edge of the world. We used to carry tents and provisions with us all the time, in case we broke down. They call it Starvation Point for a reason.”

He sighs, sips, then continues, “One day, on Sunken Island, a buddy and I sight-casted and caught 25 trout over 28 inches. Never even heard the hum of an outboard. Those days are long gone; the world has effectively shrunk, and more people catch more fish in more places than ever before. When biologists across the globe share information, one thing becomes abundantly clear. The first sign indicating excessive harvest in a fishery is a decrease in the average size of the fish. But, pressure probably isn't the only factor. Truth be told, the fishing for big trout wasn't equally good from year to year back then either. Natural cycles do come into play.”

“Yeah. We talked about that. 2014 was really good. We caught a bunch of picture-fish and saw plenty of others on the internet. We decided it was just one of those years with more big fish, for whatever reason,” the host responds, filling the guest's glass again.

The studied one swirls the amber liquid in his glass and replies, “Some people seem to think it has to be one factor or the other. But both things can be true simultaneously. We could have diminished overall numbers of big fish due to pressure, and cycles causing variations in populations of big fish in parts of the bay system from year to year, too. I'd be shocked to learn otherwise.”

The rescuer changes the subject.  “Why did you walk back to the boat right when it got dark tonight. Doesn't the bite sometimes go from zero to a hundred then?”

Nodding, the other confirms the assertion, and adds, “I was heading in from the back.  Wanted to stop and fish those rocks during the light change. I've caught 'em there many, many times in similar situations. But once I fished all the way through the sunset without a bite, I just wasn't feeling it, and the next stimulator wasn't due for a while.” He cranes his neck, looking out the window of the cabin, points toward the horizon. “I see it now. The moon's just starting to rise.”

“You put a lot of stock in rising and setting moons?” the youth asks.

“I do. Over time, it's possible to document the effects of stimulators like those. In the old days, I kept notebooks and recorded details after every fishing trip. Truths emerge eventually,” says the guest.

Predictably, the other one inquires, “You think that's the most important thing, keeping a log, I mean for somebody who's trying to become an elite angler?”

“It helps. But really, data in a file can only do so much. Makes me think of a documentary I saw recently about basketball. The concept of a basketball genius came up, first in relation to Magic Johnson. Others were mentioned. In the end, Bill Russell summed up the idea of a sporting genius best. He pointed out how well he could remember details about games, about moves other players made, about specific plays, and strategies and outcomes. I'd say he has it right. I bet Tiger Woods could recall exactly what kind of lie he had on a shot on a random hole in the 2000 U.S. Open if asked today. It's well documented that Peyton Manning and Tom Brady can recall situations with copious amounts of detail, after many years elapse. I'd say the best anglers have minds capable of doing much the same. Memory of specific details allows one to add up variables and make decisions which increase the odds of reliving past successes and decrease the likelihood of repeating mistakes.”

“Kind of like analytics in baseball,” muses the rescuer.

“I guess so. Analytics are a clinical, scientific approach to the game, but fishing is more about the heart and soul than the mind. These days, I base my decisions on what feels right. The cumulative effects of all the memories are in play, but at a sub-conscious level. More like a painter intuitively knowing which way to twirl the brush on the canvas than an engineer employing a compass to execute a perfect circle.”

The chef pours himself a glass of whiskey from the bottle and sighs, “That's deep.”

“Must be the bourbon talkin'”, the old salt chuckles, raising his glass for a toast. Three glasses clink, and he continues, “All aspects of fishing can be simple or complicated, depending on perspective and priorities. Easy catching conditions can make it impossible to recognize elite anglers, but when the elements conspire to wreck the efforts of everyone else, they flash like fireflies in the night.”

The animated conversation continues, but a couple hours later, lamplight fades, voices fall silent, and three anglers dream of glory days and fish to be caught, pillowed by the promise of the coming day.