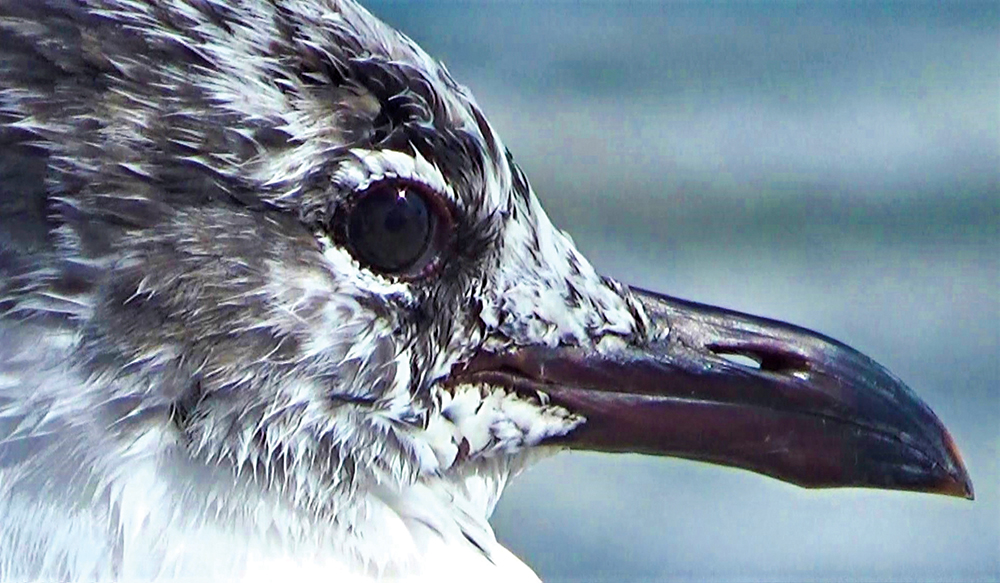 Laughing Gulls, terns and other birds enjoy the bounty of the harvest in October, the first full fall month.

Many Texans openly crave relief from summer's searing heat by the time September ends.  In some ways, and in some places, October disappoints them, since it often feels more like an extension of the sizzling season than the start of a crisp, cool one. Certainly, the dog days linger longer in deep South Texas than on the state's Upper Coast.

A quick check of climate data reveals the truth of the previous statement. In Port Arthur, the average daily temperatures on the first day of October range from a low of 65.1 to a high of 84.5; while in Port Isabel, the values range from 71.6 to 86. Those numbers look more alike than different, but they do run slightly higher at the southern fringe of the state.

Because of the warmer average temperatures on the Mexican border compared to those along the Louisiana shoreline, the fishing patterns down south differ somewhat from those up north when the calendar steps close to November. But in all parts of Texas' coastal waterways, several truths apply when the month shifts from September to October. In this timeframe, the variety and abundance of creatures inhabiting the bays and nearshore waters stand at extremely high levels.

Numerous species of fish and crustaceans share space in the shallow satellite bays, lakes and coves adjacent to the main bodies of saltwater in the Lone Star State during the first parts of fall. Normally, these remote estuaries bulge to their brims and beyond, due to the effects of exceptionally high “bull tides” prevalent soon after the autumnal equinox. With such a resplendent, metaphorical buffet available to the predators in remote corners of the bays around the time of the Harvest Moon, many trout, redfish and flounder find their way to these places.

Consequently, the furthest inland portions of all our bays, especially places near where rivers and creeks flow into them, provide productive potential while tide levels stand high in early-autumn. Shallow, sandy flats adjacent to both the Sabine and Neches river deltas, also those associated with the Trinity, San Antonio, Guadalupe and Nueces rivers all produce good catches of trout and reds this month, most notably in places where grassbeds and/or oyster reefs cover the bottom. Of course, heavy rains sending too much freshwater down the rivers will reduce or eliminate the chances of catching trout and redfish in these same places, elevating the potential productivity of parts of the bays lying closest to the Gulf of Mexico.

In wet years, the barrier islands and marshes in East Galveston Bay, coves in West Galveston, East and West Matagorda, Espiritu Santo, San Antonio, Mesquite, Aransas and Corpus Christi bays all serve up productive options when full of water and bait. The satellite bays lying in the western half of Baffin Bay do too, in addition to some of the lesser-utilized, super-shallow portions of both Laguna Madres. In all these places, catching predators in early-autumn usually means locating copious amounts of forage species in relatively small areas.

Though many predators move to remote sectors of the bays in early-October, others linger in middle portions of the waterways, just as they have all summer. In all locations, anglers' forays ideally begin with a search for signs of life and of feeding activity, in a month when predators have so many choices about what, when and where to eat. Savvy anglers key on all available signs, including slicks, mud boils, rafted bait, working birds, any clue to some kind of frenzy playing out within close range.

The fronts arriving in early-October usually punch with light weight, dropping temperatures just a little, and creating a calm lull after their passage. Soft winds then whisper under a pure azure canopy, absolutely free of clouds. On such halcyon days, specific adjustments to lure choice and presentation often produce the best catching results. While topwater lures generally work well this month on a daily basis, they definitely produce better while medium-paced winds blow over the bays, under partly cloudy or cloudy skies.

When winds fall silent and bright light reflects off the slick surface of a still waterway, presenting topwaters at a super slow crawl normally works better than moving them with a medium or fast pace. On some of these days, stealthy, rhythmic presentations made with slow-sinking twitchbaits like Paul Brown Lures, MirrOlure Catch 5s and 2000s, SoftDines and others produce much better than floating plugs. And, of course, when calm winds coincide with slack tides, soft plastics placed lower in the water column usually produce more strikes than all lures worked closer to the surface.

During the middle and later portions of the month, stronger fronts normally begin passing over the Texas coast, mixing things up positively, like a straw stirring the drink. The stout hands of brisk north winds slosh saltwater around vigorously, eventually reducing both temperatures and tide levels. With Mother Nature's metaphorical blender humming, the life and death scenarios in our bays begin to play out in different places.

Shrimp, crabs, minnows and other marine organisms migrate from the shallow confines of back-lakes, coves and satellite bays, passing through the main bays on their way to the Gulf.  While this happens, predatory fish follow them, feasting along the way. Laughing gulls, terns and other opportunistic winged creatures enhance the drama of the scenes, snatching meals above the open maws of piscatorial predators. When schools of trout and redfish chase shrimp to and through the surface, birds hover, dive and grab what they can, then squabble among themselves in a battle of the beaks.

These raucous events play out first in the shallow, remote portions of the bays, then more often in parts of the main bays leading into them, eventually much closer to passes connecting the bays to the open ocean. While the shrimp run the gauntlet of snapping jaws during the second half of this month, some of the most impressive catches of numbers of school trout will occur in upper portions of Sabine Lake, Trinity and East Galveston bays, areas around Green's and Mecom's cuts in West Galveston, over mud flats in both ends of East Matagorda, near artificial reefs in West Matagorda, and outside the mouths of back-lakes and coves in all the Coastal Bend bays.

Anglers hoping to make the most of this opportunity for fast catching should keep the trolling motor batteries well-charged and stockpile relatively heavy jigheads, weighing at least a quarter-ounce or more. Heavier jigheads facilitate longer casts, and fall faster to the bottoms of the shrimp-herding schools, leading to better catch-rates. Tossing topwaters and other lures bearing multiple treble hooks into gangs of frenzied trout under birds makes little sense, often resulting in unnecessary harm to under-sized fish and complicating anglers' attempts to quickly cast back into the melee.

Folks who have little interest in chasing birds and cooperating with other anglers in the open waters can catch plenty of trout, redfish and flounder by focusing their efforts along shallow, sandy shorelines dotted with grassbeds. Patch reefs lying adjacent to cuts and drains also produce numbers of trout and reds, as do the edges and mouths of the drains themselves, especially in Upper and Middle Coast bays, where tides sweep water and forage species out of the confines of backwater areas into the main bodies of water.

On the Lower Coast, the shallowest portions of coves and sand bars in bays like Alazan, Cayo del Grullo, Laguna Salada and both Laguna Madres will provide productive alternatives for wading anglers who don't like to troll around in the midst of the madness. During the second half of October, when water temperatures and tide levels begin to decline, topwaters generally work well for anglers targeting jumbo trout and redfish on shallow flats, bars and shorelines in southern extremes of the state.

My logs and data indicate this month ranks fairly low in terms of producing trout meeting or exceeding the twenty-seven inch and seven-pound marks, and people who really want to catch a monster trout this time of year should avoid fishing around obvious signs of ravenous schools of small trout. While anglers occasionally catch trophy trout mixed in with hordes of dinks and marginal keepers, tales of catching numbers of big trout under the birds remain locked largely in the realm of myth. Catching a nine-pounder under birds hovering over harassed shrimp is about as likely as lassoing a unicorn with a rope made of cotton candy.

Among the biggest trout I've caught in October, a thirty-incher blasted off on a chrome/black SkitterWalk worked enticingly close to the edge of a narrow drain emptying a tiny backwater area onto a sandy, grassy flat in Nueces Bay. I and my partners stayed tight to the shoreline vegetation that day, accepting a relatively slow bite-rate as a necessary part of the deal, hoping to boost our odds for tackling a monster. Others will feel no need to make such a decision, preferring instead to enjoy the bounty brought on by the first full fall month, when catching numbers of fish often feels quite easy.