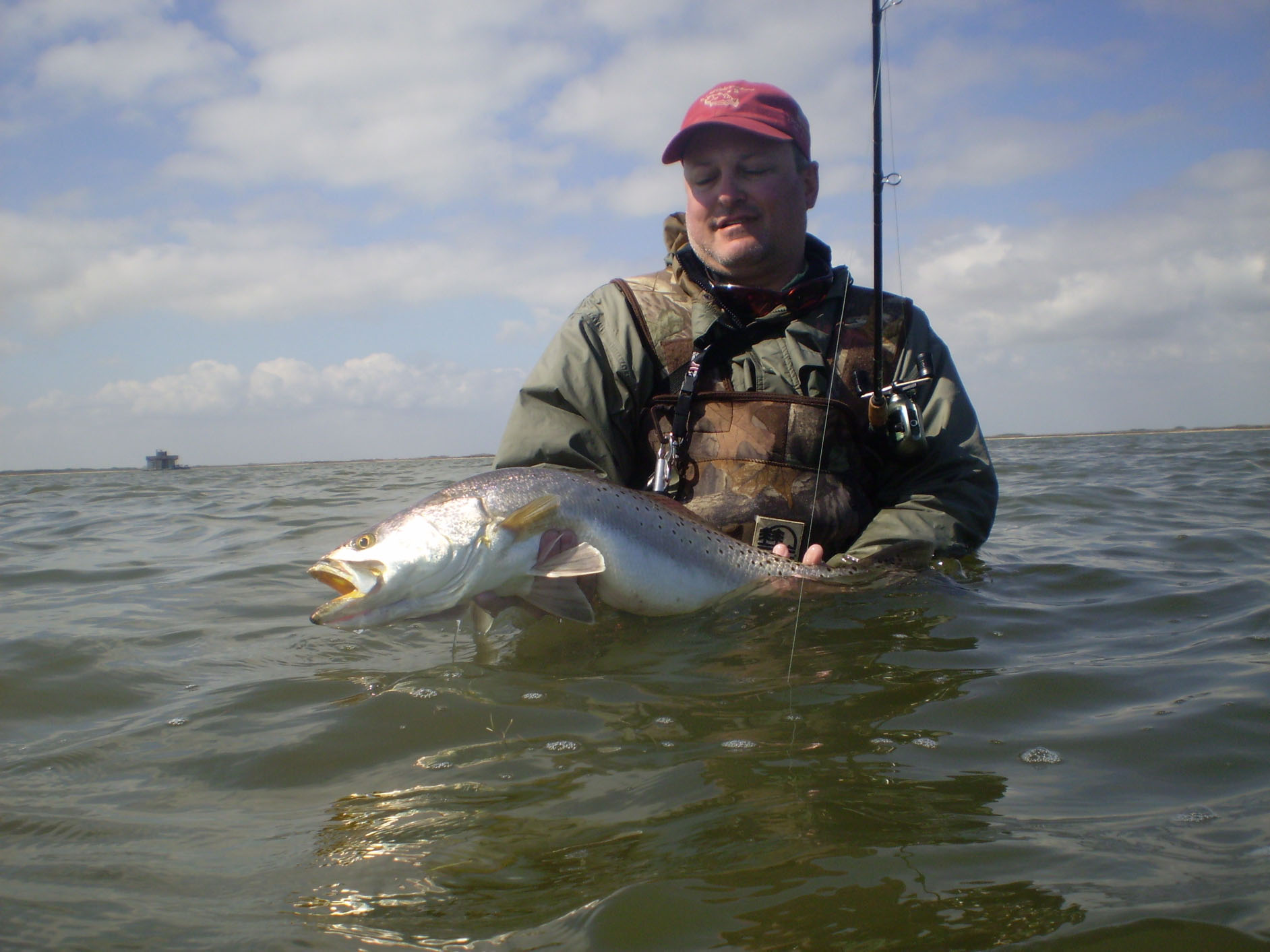 The following is an excerpt from a novel I wrote over the last couple of years. I chose to present this portion of the text here because this is a saltwater fishing magazine. Trout fishing does play a prominent role in the action of the novel, but it's more than just a fishing book. I'd describe the style of it as Southern Gothic Fiction. Humbly, I assert that it is my best work to date; certainly it was the most personally satisfying piece I've ever written.

The complete text is not available in hard copy form, but I am offering it for sale as a printable pdf file. It's 132 pages long and the price is $11.99. See the Cyber Library section of my website (fishbaffinbay.com) for full details on this and a collection of old favorite articles I'm also offering. Or call 361 688 3714 to place an order.

"It was one of those unforgettable days of fishing. The Upper Laguna Madre teems with fat, hungry speckled trout in late-winter and when conditions conspire to make them bite, catching an obscene number of the frisky fish on lures is sometimes possible.

We spent the first few hours of daylight wading right next to the shoreline in a dense fog, catching trout in the shallowest confines of the grass flats where the crystalline waters of this hypersaline lagoon give way to soft, sandy cow trails meandering through mesquite stands. Each one in the group was catching his fish the way he wanted to; they would bite most anything we showed them, as long as the plugs were presented with even minimal skill and sensitivity.

My customers and I were ecstatic, squinting at each other through thick morning mists to admire the impressive specimens we continually hooked and brought to hand. I spent much of my time walking among the other three and capturing digital images of them with their fish. We released a high percentage of the trout we landed, since we only eat the smaller ones, under about twenty two inches, and most of them were longer than that.

No true trophies came to hand, but the average trout was twenty four or twenty five inches, some reaching the twenty six and seven inch marks. Iridescent hues mingled in reflection on their broad backs, atop a base of lavender, azure and warm greens. Numerous black dots lined their upper sides, appearing darker than usual in the gray, diffuse light and the yolky yellow flesh that seemed to paint the insides of their wide mouths and to stain their jagged, tooth-encrusted lips appeared almost like makeup on a clown's face.

I caressed all of the lovely trout I caught, happy to wrap my hand gently around their broad backs and honored to marvel at their unkempt beauty before releasing them to swim again with their kind.

Later, under a bright sky and with a steady, warm, spring-like breeze blowing on our backs, I moved out to some deeper potholes in the grassy flats along another stretch of shore, though I instructed my clients to stay next to the floating mats of grass immediately adjacent to the bank, where I said the bigger fish would most likely be. Out among the waves in the deep sandy pockets, I located a marauding gang of four to six pound fish; for some three hours, I got a bite on nearly every cast. In time, I could see where the next fish would be, probing each nook in a long series of potholes and picking off trout after trout on a blood-red worm. I'd have caught more than the thirty or forty I managed to land if not for the fact that I had to walk away from them five times to take pictures of my customers who were busy catching fewer, but even bigger fish closer to shore throwing bulkier plugs as I had instructed them to.

Eventually, they landed a pair of twenty seven inch trout simultaneously, and their grinning mugs now adorn my website in a photo that captured the moment of their release. Such a day of fishing serves to satisfy all of an angler's relevant senses. The welcome thump of the strike precedes the powerful and unpredictable pull of a frightened fish against a bent rod; the sloshing sound of the foaming water sent into a boil by the head-shaking antics of the trout stirs laughter and silly comments from the giddy anglers who may have waited a lifetime for the chance to make gluttons of themselves by catching and playing trout of this size time and again for hours on end.

I was enjoying myself as much as I ever have on a day of fishing, giving my customers the best stretch of shore but walking into a wad of willing whoppers to call my own. Feeling none of the pressures that accompany a slower bite or tougher conditions, I was released into a titillating private world in which I could see right where the fish would be and where I found a happy marriage between two related types of anticipation, first the thrill of waiting for the tell-tale thump that would signal a bite and then the subsequent dream of how big each fish might be. The hooksets transferred energy down my graphite rod, through my hands and into an internal sensor I used to try and guess the size of every trout I hooked. A few jumped out of the water and showed me their dimensions, but others stayed under the surface, prolonging the mystery. Some pulled harder than others and at first seemed larger than they turned out to be; all provided an energized and pleasantly lingering fight.

Knowing that my customers might catch a truly giant fish at any time, I was impressed by the focus they showed in their efforts and thrilled by the fact that I was able to defer to their needs while satisfying my own.

After catching a trout over five pounds on several casts in a row, my joy reached a crescendo. "Ruh roh!" I shouted when my rod bent over again and we could all see the wide open mouth of a panicked trout as it broke through the surface, shaking from side to side violently, "It's another five pounder!" I let out a laugh only other fishing junkies could truly comprehend as I brought my lively prize quickly to hand, having abandoned my normally patient way of fighting them in favor of reducing the time each was on the line so I could sling my worm more quickly back into the bright sandy pockets and feel that thump once again.

"Look at this guy," one of my customers said. "He gets to fish every day and still he giggles like a little kid when he catches a trout!"

"Nobody's fishing is like this every day," I told him as I reached out to free the still-thrashing speck so I could cast again. "If you don't get excited when you're catching five pounders on every cast, you might as well quit coming out here."

Well into the unseasonably balmy winter afternoon, we did quit, as soon as the bite slowed to a more ordinary pace, not wanting to taint the magic of the day. I then followed my customers to a local bar for a celebratory drink. We raised our glasses high in unison and clinked them together to signal our mutual satisfaction at the day's events. We'd had it easy and for a long time, landing fifty or more trout over five pounds.

"We didn't get the big one today, but there's supposed to be a front coming late tonight. Big Mama might take a bite in the morning in the first few hours after this thing blows in," I told the three reveling men. But I could see from the twinkle in their eyes and the blush on their cheeks that the announcement was largely lost on them; they were already ordering a second round of drinks. "None for me, thanks," I brushed their offer away. I didn't really need alcohol to help me feel the deep and complete contentment that such a day of fishing brings.

I warned them not to overdo it, since they were fishing with me again the next day and I knew the bite would likely be lesser but also that the opportunity for another rare and fine outing certainly remained. "I want you guys alert when we leave the dock tomorrow," I told them, and then I backed away from the bustle of the bar and made my way home."