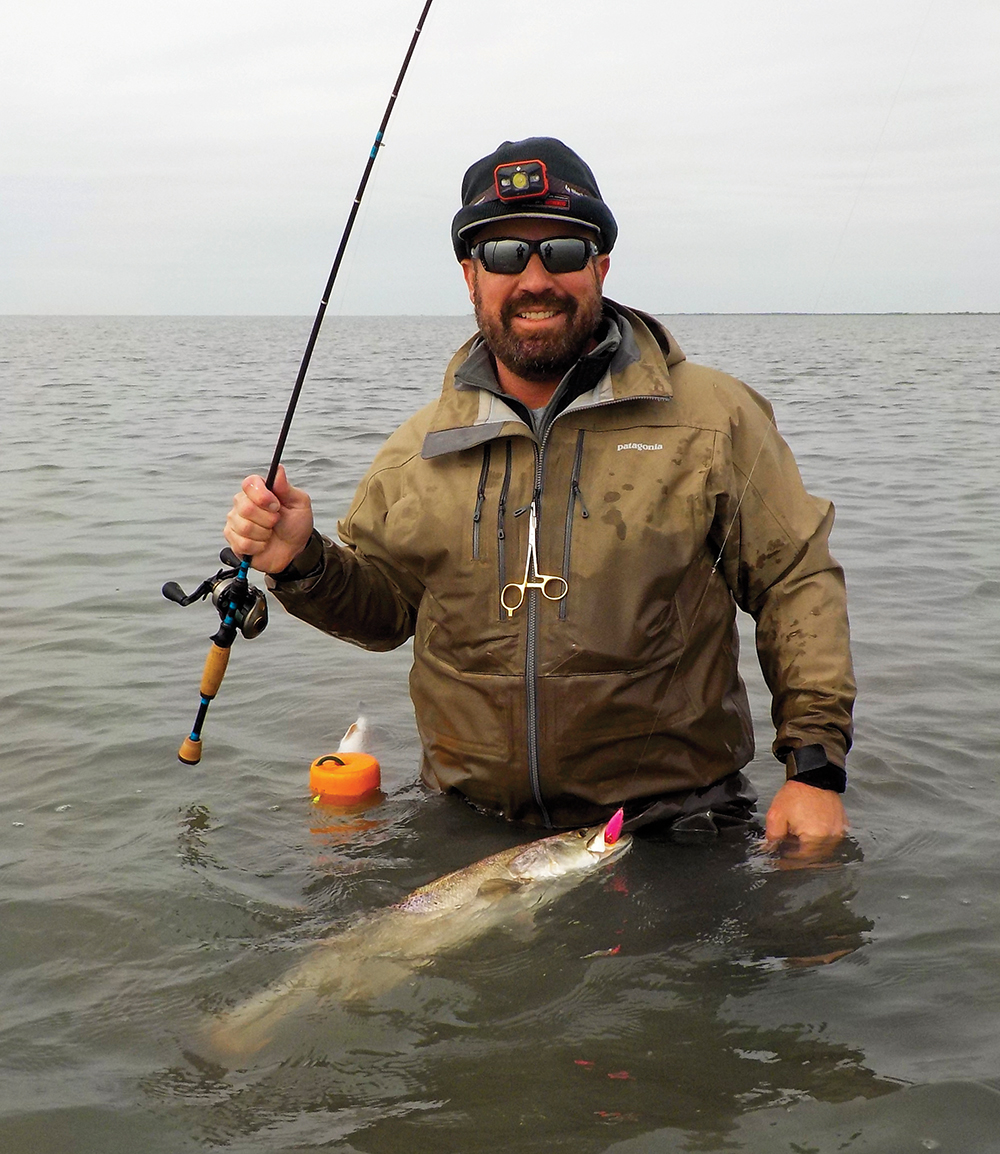 Small topwaters often work better than full-sized ones when light winds create subtle waves on the water, regardless of the season. Justin Whitworth used a pink Baby Skitter Walk to trick this pretty trout into taking a bite.

Near the end of May, after the festivals memorializing the sacrifices of our veterans fall silent, summer starts in earnest, in the minds of most  Americans. Typically, schools shut down for a couple months, and kids spend most of their time frolicking in neighborhood pools, playing in the streets, or working part-time jobs. In Texas, many anglers think of June as a time for heading to the coast and soaking live or fresh-dead bait, hoping to catch some of the numerous species prowling the shallows at the edge of the Gulf of Mexico.

But for anglers devoted to chunking lures and targeting primarily speckled trout, this is a transitional month. Technically, most of June falls in the season of spring on the calendar, not summer, and productive patterns which prevail in the first part of the month differ slightly from those at its end, as the days reach their peak length and the water heats up. Chances of catching trout meeting or exceeding the eight-pound mark remain fairly high through the end of spring, but they diminish quickly once summer starts, as shown by the history of the trout division of the CCA Texas STAR Tournament.

Normally, weigh-masters scroll several big numbers on the white boards within the first two or three weeks of the event, a span of time normally ending about the middle of June. After summer starts, the number of fish brought to the scales which meet the qualifying standard falls to nearly zero, attesting to the difficulty of catching a giant trout in the Lone Star State during the hottest season, regardless of methods employed.

My own experiences and those of some of the best trophy trout anglers I know prove it's possible to catch monster trout in the same shallow places during the height of the heat wave as is possible in much cooler weather.  But the number of fish frequenting those spaces falls to a level low enough to discourage all but the most-dedicated trophy enthusiasts.  Urging strikes from scattered sow trout surrounded by lots of shallow water can prove difficult in any season; on the hottest days of the year, doing so can become nearly impossible.

Many coastal anglers who love fishing with lures adjust to this basic fact by shifting the focus of their efforts, working on honing their presentation skills and increasing their knowledge of the bays, trying to have fun and catch plenty of fish. In June, several productive patterns assist the accomplishment of these dual goals. As the heat wave commences in earnest and trout begin to feel its effects acutely, the fish alter their daily habits accordingly.

Starting early this month, and lasting throughout the warm period, a basic truth applies. Late at night and into the first hours of morning, trout venture more willingly into shallow, cooler water to feed, retreating to water of greater depths as the sun rises in the sky. Consequently, an old adage comes regularly into play: “the early bird gets the worm.”

One of the most productive patterns available to trout anglers this month involves fishing shallow structures or shoreline areas lying within relatively close range of deeper waters during the last hour of night and into the early hours of the morning. On the Upper Coast, or anywhere strong tidal movements influence the bite, a medium to strong incoming tide occurring during this time-frame enhances the chance for success.  I caught my first eight-pound trout fishing just such a pattern.

On June 5, 1997, the fat sow blasted off on a full-sized Super Spook wobbling through numerous mullet huddled atop a grass bed in knee-deep water near Trout Bayou on the Aransas Bay side of Traylor Island. I and a partner caught two more significant fish that morning, the first about half an hour before the sun peeked over the eastern horizon, the last an hour or so after, when an incoming tide lost its momentum and the rafts of bait scattered into small pods and singles.

Back in those days, we kept on tossing topwaters, trying to urge one more heart-stopping strike. Today, I would react to the change in signs and decrease in bite frequency by switching to a slow-sinking twitch bait, then a soft plastic, in attempt to scratch out more strikes. Such a strategy often allows for extending the productivity of the pattern, regardless of where it occurs.

On the Lower Coast, in places with minimal daily tidal flow, a similar pattern plays out on many early-June mornings. Trout harass mullet and force them into tight packs along main-bay shorelines, or atop large sand bars or rock formations. In the last hour of night and into the early hours of the morning, the predators often willingly take topwaters; some will still snatch slow-sinking twitch baits and soft plastics for a while after their appetites wane. During the first half or so of the month, the places where these life and death scenarios play out might lie hundreds of yards or more from water with depths of at least five feet.

On the Upper Coast, this means the fish might appear inside shoreline coves or lakes, and on the Lower Coast, it means they might regularly feed on flats well away from the edges dropping off into the depths. And, in many places on the Lower Coast, where the amplitude of moving water bears less significance than on the Upper Coast, the fish might feed aggressively in places with virtually no regular current.

Conversely, by the end of the month, when summer has started not only in the minds of school teachers, housewives and teenagers, but also on the calendar, trout tend to hang closer and closer to cooler water. They still feed well on a daily basis at the end of the night and into the early hours of the day, but the places where they force lots of prey species onto shallow structures or shorelines lie closer to deep basins, holes and channels.

By the time the month of July stands imminent on the calendar, spoil banks lying adjacent to ship channels and the ICW, and shallow structural elements lying in the midst of expanses of deep water become more productive. This truth rings loud and clear in all parts of the state.  On the Lower Coast, in places with minimal tide movement, spoils banks close to channels and sand bars standing in relatively deep waters regularly influenced by wind become preferred over locations along protected shorelines or with basins of medium depth, where the movement of water reduces to nearly zero on a daily basis.

In addition to this subtle, general change in the locations of the most productive places to find and catch trout on lures in the month when the shift from spring to summer occurs, other alterations to methods and strategies often result in more productive outcomes. As mentioned above, the basic idea of starting off each day early, throwing topwaters in the pre-dawn darkness and waiting for noisy blow-ups remains a wise idea throughout the month, but the need to present lures lower in the water column begins to happen earlier and earlier on a daily basis as the heat wave intensifies.

On average, light winds prevail during the morning light-change at the end of spring and start of summer. Generally, trout take topwaters worked slowly and steadily while winds whisper over calm, warm water. On a generic day, anglers can often extend the effective window for floating plugs by adding variable speeds into their presentations over time. Once the sun begins to cast shadows and wind speeds begin to rise, using the reel handle to create speed bursts with the lures, then pausing them and allowing them to bob up and down on the water for a few seconds often causes trout to blast off when a generic, steady pace of movement in the presentation won't.

On days when the calm lull lasts longer into the morning, slow-sinking twitch baits worked a bit under the surface often produce more strikes than topwaters as the sun gains altitude over the horizon. Adjusting lure choice and presentation in response to the conditions thus aids in the quest for consistency of productivity. Days which don't fit the stereotype often demand more radical adjustments to method and strategy.

Some late-spring to early-summer nights end with winds whistling in the ears of anglers tossing lures around shallow shorelines and structural elements lying close to deep water. In such scenarios, the efficacy of both topwaters and twitch baits usually diminishes, creating a need to employ soft plastics from the start of an excursion. If and when the unexpected stronger winds die down, a bite on lures worked higher in the water column, even right at the surface, can definitely occur, but if medium winds persist right through the light change and into the mid-morning hours, soft plastics usually draw many more strikes.

By the time our nation's birth-month arrives, the majority of our trout tend to make shorter feeding forays into shallow areas, even those lying in close proximity to deeper, cooler water with higher levels of tidal movement. In response, savvy anglers target them by making quicker adjustments to location, lure choice and presentation, favoring soft plastics more and floating plugs less. They also make the move to presentations made lower in the water column earlier in the day, on average.

When water temperatures rise to a point where they don't fall much below 80° at the end of the night, many of the trout begin staying in places with water at least seven feet deep, having no shallow shorelines or structural elements within close range. When this happens, catching them on lures becomes more difficult, at times nearly impossible, especially for those firmly committed to the strategy of wading. This change normally takes place after the middle of July. Until that time of year arrives, wading anglers who get up early and make subtle adjustments to their methods to match the type of conditions they face can continue to catch numbers of trout on lures on a daily basis, with a few big ones mixed in.