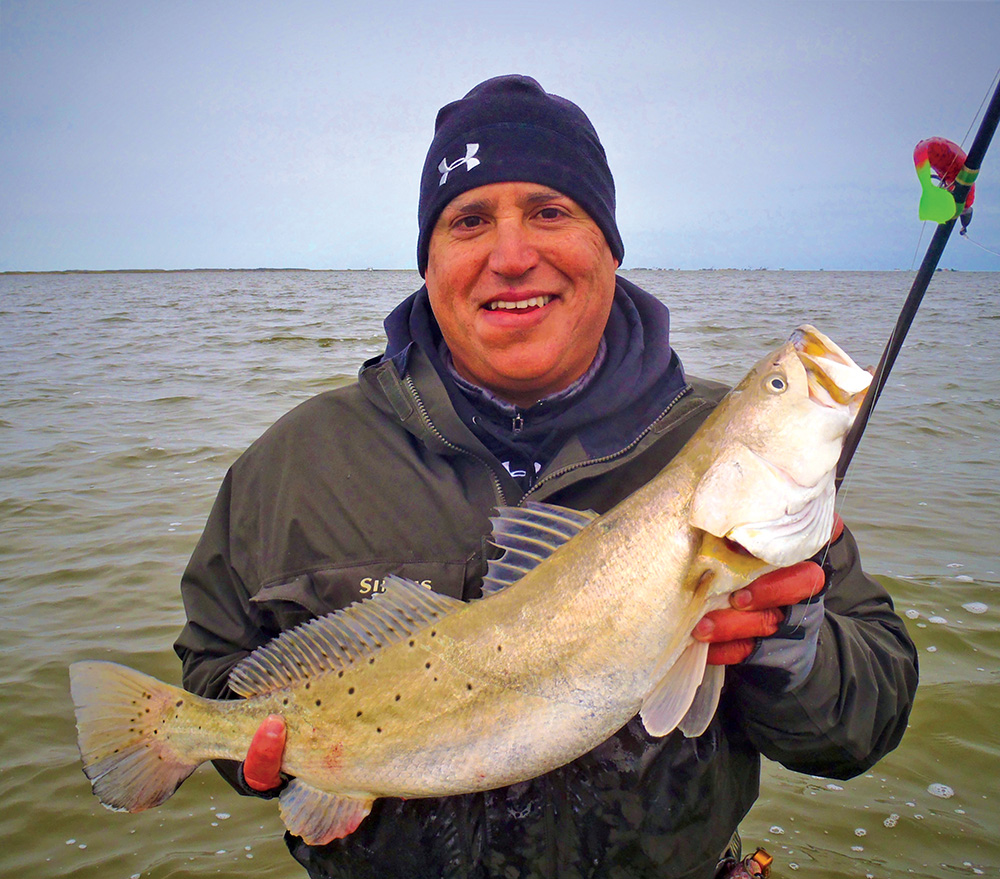 Paddle-tails like the ones used by Rudy Keilman to catch this fat trout in cold weather, work well in murky water and in low light conditions.

While working on the water, running charters targeting spotted seatrout with artificial lures, I've critically observed hundreds of novice anglers. Over the years, I've noticed several mistakes commonly made by these folks, related to their choices of equipment and tackle.

These fundamental flaws place people squarely behind the eight ball, hindering their potential for productivity.

At the top of the list of basic problems, unnecessarily heavy rods and reels hamper results.This phenomenon lingers like a shadow cast by the past, when most people considered ridiculously proportioned rigs appropriate for fishing the coast. We've all seen these unfortunate souls lined up on piers, bay shorelines and at the beach, sporting long, thick fiberglass rods and hefty reels, better suited for dueling bull drum and king mackerel than speckled trout.

Who among us can say they've never considered the irony associated with using such mighty tools to sling a dead, 60-count shrimp tethered to a pyramid sinker into knee-deep water? Fish likely to bite such a bait generally weigh a pound or less; their heft barely bends those formidable sticks. The silly scenario represents a caricature of the activity, a kind of unintentional satire.

Way back in the day, educated, thoughtful coastal anglers targeting trout carried and used reels like the Abu-Garcia 5500, mounted on seven-foot popping rods with cork handles measuring over a foot in length. In the less-distant past, the rods and their handles shrunk somewhat, and reels like the “old green” Shimano Curado became popular, bringing the overall weight of the gear down under a pound. Today's feather-light rigs render all the vintage stuff appropriately obsolete.

In a more evolved world, smart anglers consciously match the dimensions of targeted fish with those of the tackle implemented to catch them, regardless of their preference for lures or natural baits. Individuals who use live bait will find slightly heavier rods and reels useful, as will those trying to catch multiple species, including over-sized redfish and black drum. Undoubtedly, trout-seeking lure-chunkers who naively burden themselves with jumbo tackle negatively impact the number of fish they catch.

As we approach the third decade of the 21st Century, a serious trout angler can (and should, if possible) wield a rod a reel combo weighing barely more than half a pound. The best reels on the market today (some of which cost as little as $60) weigh less than six ounces, and the lightest rods add merely three to four more. Admittedly, most super-light rods fetch a high price, but any discerning angler can find adequately light, affordable ones.

Still, most novices I encounter use reels weighing over eight ounces and burdensome, seven foot rods with handles extending too far behind the reels. When I discuss the issue with my customers in the field, the most common explanation offered reveals a misconception related to the need for “plenty of backbone” when fighting fish. People give trout, even big ones, far too much credit as adversaries in a tug of war.

Super-light rods measuring between 72 and 78 inches long and reels weighing less than six ounces prove perfectly adequate for conquering even the largest trout. I know because I've used them to subdue jacks and drum weighing well over thirty pounds. Truth be told, my rod and reel does not perform gracefully in a wrestling match with ugly brutes like those, but it does allow me to wear them down over time, though most of the line might disappear off the spool during the rounds. More importantly, my equipment easily tames all trout, even monsters, without undue stress; over the last decade, I've conquered all my picture-worthy specks with a combo weighing less than ten ounces, partly because I load the reel with braided line.

Sadly, I still encounter many weekend warriors gearing up for their forays with monofilament line riding on the spools of their reels. The difference between mono and braid closely resembles the difference between a golf cart and a Mercedes Benz. No amount of skill on the part of a driver can elevate the performance of an electric buggy to the level of a luxury automobile, and no clever actions by an angler can eliminate the weaknesses inherent to a monofilament thread.

When I ask novice anglers why they're still using mono as a main line, I typically hear a misinformed explanation related to ease of use. Most believe braided lines create more problems and risks than mono. I know where this idea originated, but it simply bears no truth these days.

When coastal anglers first tried using braided lines a couple decades ago, they did so at their own peril. Those lines had angular facets, causing them to tangle easily, sometimes hopelessly, when a backlash occurred with a level-wind reel. I knew guys who carried sharp instruments specifically for picking out their troublesome backlashes in those days.Manufacturers of today's braided lines have eliminated this problem; I now find backlashes made with braid every bit as easy to pick as those made with mono.

More importantly, braid doesn't stretch, so it provides greater sensitivity to the angler, who will feel far more bites than they could with the other stretchy string. Taking things to another level, braid's lack of stretch facilitates greater control over lures during presentations, empowering anglers' creativity, and reducing stress on their arms and wrists. This benefit of braid becomes readily apparent when anglers employ bulky topwaters and twitch-baits in medium to strong winds.

In addition to these positive attributes, braid of an appropriate strength takes up much less space on the spool of a reel than mono; the diameter of thirty-pound test braid roughly equals that of eight-pound mono. Consequently, anglers can fit more line on their reels. This makes it possible to fish with feather-light reels without losing too much line capacity, further enhancing the anglers' stamina for chunking and winding.

Stated bluntly, anglers using braid will catch more fish than those using mono. This statement rings true whether the angler deploys a spinning or level-wind reel. Braided line enhances the efforts of anglers using spinning tackle in the same ways it does for those using the more popular level-wind reels, without creating any difficulties. “Wind knots” in the lines of anglers using spinning tackle result from user error, not from any aspect of the type of line passing through the rod's guides. But that's a topic for another piece.

This article describes fundamental flaws commonly made by novice anglers with regard to their choices of equipment and tackle. A third one I regularly observe involves the reliance on one type of soft plastic all the time. These days, when I advise my customers to put on a worm, usually out of necessity, and because I'm catching fish on mine, my customers almost always produce one with a paddle-tail.

This relatively recent phenomenon developed slowly, as a result of a common tendency among people to “throw the baby out with the bath water.” In the early 1990s, when companies like Bass Assassin introduced rat-tailed soft plastics, guides and experts quickly realized they caught more fish when they used them in place of the shrimp-tails they'd previously preferred. Most believe the better catch rate results from the erratic movement patterns generated by the design of the slender, gradually tapering tails.

For years thereafter, most top-notch trout anglers I knew deployed a rat-tailed Bass Assassin (normally red shad or plum) when they decided the best catching could be done with a worm.In a way, those old-school guys made the same mistake today's anglers make, by relying on just one type of soft plastic all the time.

At some point, people began to see the fanatical reliance on rat-tails as a hindrance to productivity. Many began to praise the productivity of paddle-tails. Slowly but surely, paddle-tails rose to dominate the market, and a large percentage of folks forgot the poignant lesson related to the rat-tails.

I'd contend the anglers who first proved the superiority of rat-tails over shrimp-tails had one thing right. Much of the time, the spastic movement patterns of rat-tails generate more bites than the more straight-line movements of shrimp-tails and paddle-tails. I'd say this truth carries maximum weight when fish can see the lures clearly. On the other hand, when strong winds, excessive freshwater runoff or brown algae limits visibility, paddle-tails make more sense, specifically because they move in straighter lines, generating vibrations as they go.

As a rule, anglers should deploy paddle-tails in murky water and/or in the dark, and rat-tails in clear water, when the sun shines.Of course, sometimes all types of soft plastics perform about equally well, when the issue of depth of presentation trumps all other aspects of the situation, but anglers should still use the type best suited to the moment to maximize results.Along with their discerning choice related to type of soft plastic, anglers should consider color, sticking to a simple, basic plan.

Since rat-tails perform better in clear water and bright skies, ones bearing natural colors work best. Conversely, since paddle-tails garner more strikes from fish which can't easily see them, throwing ones with strongly contrasting colors makes more sense. The average angler should pick rat-tails in one or two natural hues (I prefer MirrOlure Provokers in white and clear/glitter) and throw them exclusively when conditions merit their use. They should also commit to paddle-tails in a couple of color patterns including strong contrasts, like red/white and plum/chartreuse.

By choosing the optimal type of soft plastic for the situation, in a color which makes good sense, anglers can eliminate a basic flaw and catch more fish. If they attach the worm properly to the end of a braided main line, they'll similarly enhance their potential for productivity, particularly if the line rides on a feather-light reel attached to a relatively short, light rod which doesn't tire them out quickly without providing any tangible benefits. In these simple ways, modern trout anglers can establish a solid foundation for success.