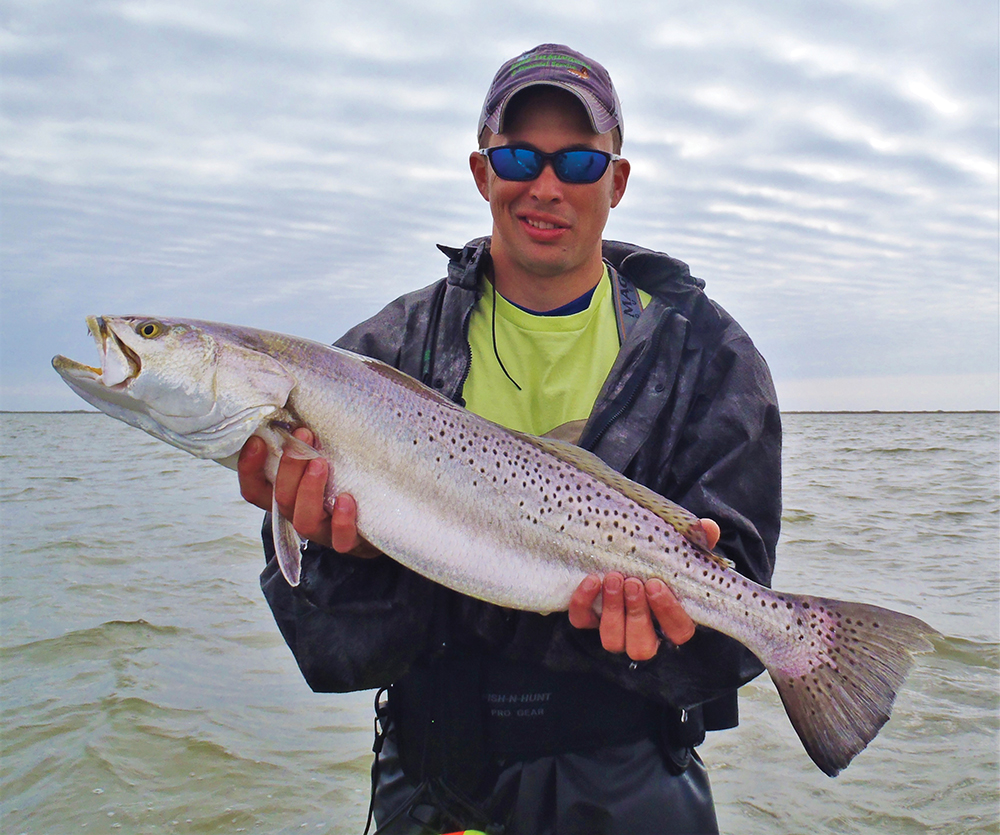 James Bump caught this beautiful specimen on a windy day in March by making a persistent effort with a soft plastic on a light jighead.

When people recall famous events, they often focus on signature, final moments which record their significance. Millions remember the video which shows Buzz Aldrin leaping off the steps of Apollo 11, taking “One small step for a man, one giant leap for mankind.” But, while cherishing the importance of the main event, many forget all the foundational efforts which facilitated its existence.

A similar tendency to focus sharply on high-points occurs when people recall famous sporting events. When Vince Young dashed to his right and crossed the goal line in the last minute of the 2006 Rose Bowl, he helped Mack Brown's Longhorns complete a come-back victory and win a BCS Championship. I've spoken to many football fans about it; most mention the indelible image of VY standing in the corner of The Coliseum, his arms raised in triumph, after scoring the winning touchdown. They often say, “It was inevitable. We all knew he would get it done, one way or another.”

While I share the sentiment which fuels such a statement, I've also watched the replay of the game several times since, and I recognize other gateway events which made the iconic play possible. When the USC Trojans possessed the ball before the Longhorns' last drive, they held the lead when they faced a fourth and one near mid-field. Leaving their Heisman Trophy tailback on the sidelines, they handed the ball to Lindale White, who blasted into the middle of the line, trying to earn a first down which would likely have sealed the deal for them. Texas' safety Michael Huff read the play early, shuffled to his right and stuffed White short of the line to gain. If Huff does not make the play, VY's seemingly inevitable run to glory probably never happens.

Similarly, gateway events helped Tiger Woods sink a putt on the 72nd hole of the 2008 U.S. Open, played on the oceanside fairways of Torrey Pines Golf Club, in La Jolla, California.  Stepping onto the tee at the par-5 finishing hole, Woods knew he had to make a birdie to tie Rocco Mediate and force a playoff the following day. He drove left, into a fairway bunker.  With a drive in the fairway, Tiger would likely have chosen to go for the green on his second shot on the shortish hole, to set up a two-putt birdie. But a squirrelly lie in the sand caused him to fear the pond fronting the green, so he chose to lay up.

With a middle iron, he successfully removed his ball from the bunker, but it again failed to stop on the short grass.  From wiry strands of grass in the right rough, the determined champion faced a tricky pitch over the pond to a front-right hole location. He executed the shot admirably, controlling its distance perfectly, but the ball finished nearly twenty feet above the hole to the right, on a slippery slope. Of course, after The Cat's ball predictably found the bottom of the cup on his fourth shot, Jim Nantz's famous voice asked all who watched, “Did you expect anything different?”

No, Jim, we did not. In fact, I sensed one thing all along. The unconquerable man in the blood-red shirt would use precisely four shots to complete the hole, no more. The image of an exuberant Woods clenching and shaking his fists while shouting into the sky resonates with golf fans to this day, and will for as long as the game is played. But, if Tiger had chosen to gamble and go for the green on his second shot from the sand, or if he'd failed to control his wedge approach-shot to the pin, we'd never have seen him hole that putt.

Recently, it occurred to me how all this relates to the sport of fishing. I can recall significant events in my own career which transpired mostly because other gateway events opened up a symbolic doorway through which they could walk. Like the time in late-February of 2010, when I caught a ten pound trout, a day on which I earned just four bites over a period of about seven hours. In the shallows on the ample, muddy flat, I'd caught trout over nine pounds the previous two days. With temperatures on the rise, the bite had slowed measurably. Though I coaxed at least twenty bites the first day I found the big ones on the flat, I had only half that many the next. When I parked the boat at the edge of the area the third day, I made a prophetic announcement to the customers in my boat. “If we get a bite in the first two hours, we'll be here all day. One of those monsters is probably still around.”

Forty-five minutes into the wade, a fish made a somewhat tentative move to take my pearl/pink Fat Boy, the same one I had used all week. The weak strike came on a super-slow, straight retrieve, which I executed after shaking my rodtip vigorously several times, to cause the lure's head to wobble from side to side. Half an hour later, I caught a four pounder, using the same presentation style. “Hope y'all like the scenery,”  I proclaimed, while releasing the fish. “We ain't movin!”

We spent most of the remainder of that day circling around slowly, covering the entire area as thoroughly as possible, subtly tweaking the presentations with our Fat Boys, changing the direction of our casts, trying to stay focused all the while. A couple hours later, one of my customers caught the biggest trout of his life, which stretched the tape to about 29 inches. Eventually, almost five hours into the grind, I caught the fattest 30-inch trout I've ever seen, within no more than forty yards of where I'd caught my first and only other trout of the day.

My mind clearly recalls the vicious strike of the ten, the way she stubbornly pulled sideways like a redfish, the elation I felt upon the moment I succeeded in pulling her close enough to see her dappled back and wide yellow mouth, also the satisfaction that followed, when the Boga Grip accurately measured her weight.

If I'm not careful, I tend to forget some of the gateway events which facilitated the catch of the gloriously fat trout. If I'd been less thoughtful and creative with my presentation and failed to urge the two strikes not long after starting the wade, I might have left the area, and in doing so, failed to connect with one of the best fish of my career. In fishing, as in many other endeavors, making good plays and decisions can lead to bigger and better ones, sometimes reaching a crescendo, culminating in an unforgettable, iconic event.

I can describe several ways in which this truth exerts influence on a daily basis for anglers who deploy artificial lures. On some days, things play out predictably, in exactly the ways we want them to and believe they will. Sadly, those days don't represent the norm. On average, a day of fishing requires anglers to make adjustments in response to unexpected elements or outcomes. Most often, the conditions and/or bite attitude of the fish do not meet our expectations, so we must tweak elements of our strategies to offset and overcome the unexpected realities of the moment.

A captain can sometimes successfully conquer the seemingly malicious effects of negative weather and other elements by refining lure choice and/or presentation style, to prove a few fish swim within the scope of the anglers in the group. Using sound operating principles and considering the time of year, prevailing weather elements, water quality and other factors, a thoughtful angler sometimes figures out some creative way to earn a few strikes when doing so proves quite difficult. This might lead one to correctly favor staying in a place and waiting for an improvement in the feeding mood of the fish over moving to a new spot.

If the adjustment to lure choice and/or strategy includes trying something well outside the normal procedures, like deploying a soft plastic dangled under a cork, adding a rattle to a jig, or incorporating some radical aspect of movement into a presentation, the action might well serve as a gateway event which leads to a memorable catch later in the day. Even a subtle adjustment to movement pattern in a presentation, or to size or color of lure, might do the same. Such scenarios most likely play out when the person making the adjustment strongly believes a decent number of the “right” fish swim within reach, either because of productive recent efforts made in the place, or because numerous slicks, mud-stirs, swirls and similar signs indicate the presence of plenty of fish.

Conversely, a captain seeing scant signs of life in a place where recent stops have yielded positive results might scan the horizon in search of greener pastures. In some cases, bait jumping in the distance might correctly call for a short move. Such a decision can become a gateway event, leading to catching something significant. In other cases, making subtle adjustments to pace of movement or choosing to pass back through an area more than once might serve as the stimulus for a memorable catch.

In the end, when an iconic event unfolds and a picture of a smiling angler holding a big trout appears on the internet, our memories usually struggle to adequately recall all the details related to it, some of which contributed to it, or allowed it to happen. The human mind tends to permanently etch extremes into the database, while discarding seemingly less important details. Most likely, this innate tendency helps us save space on the metaphorical hard-drive of the brain. Because of this prevalent behavior, I repeatedly tell people to take the time to record details in fishing logs.

Anglers who choose not to keep detailed records will fall prey to a predictable habit of generalizing results and exaggerating outcomes, both positive and negative ones. They'll remember extremes and big events, but will forget many of the factors which facilitated them.  Anglers who record the right kinds of data stand a better chance of winning the fight against this universal tendency. The astute few who learn to identify and document gateway events which open doors for iconic events will likely become more productive than all others in the end.