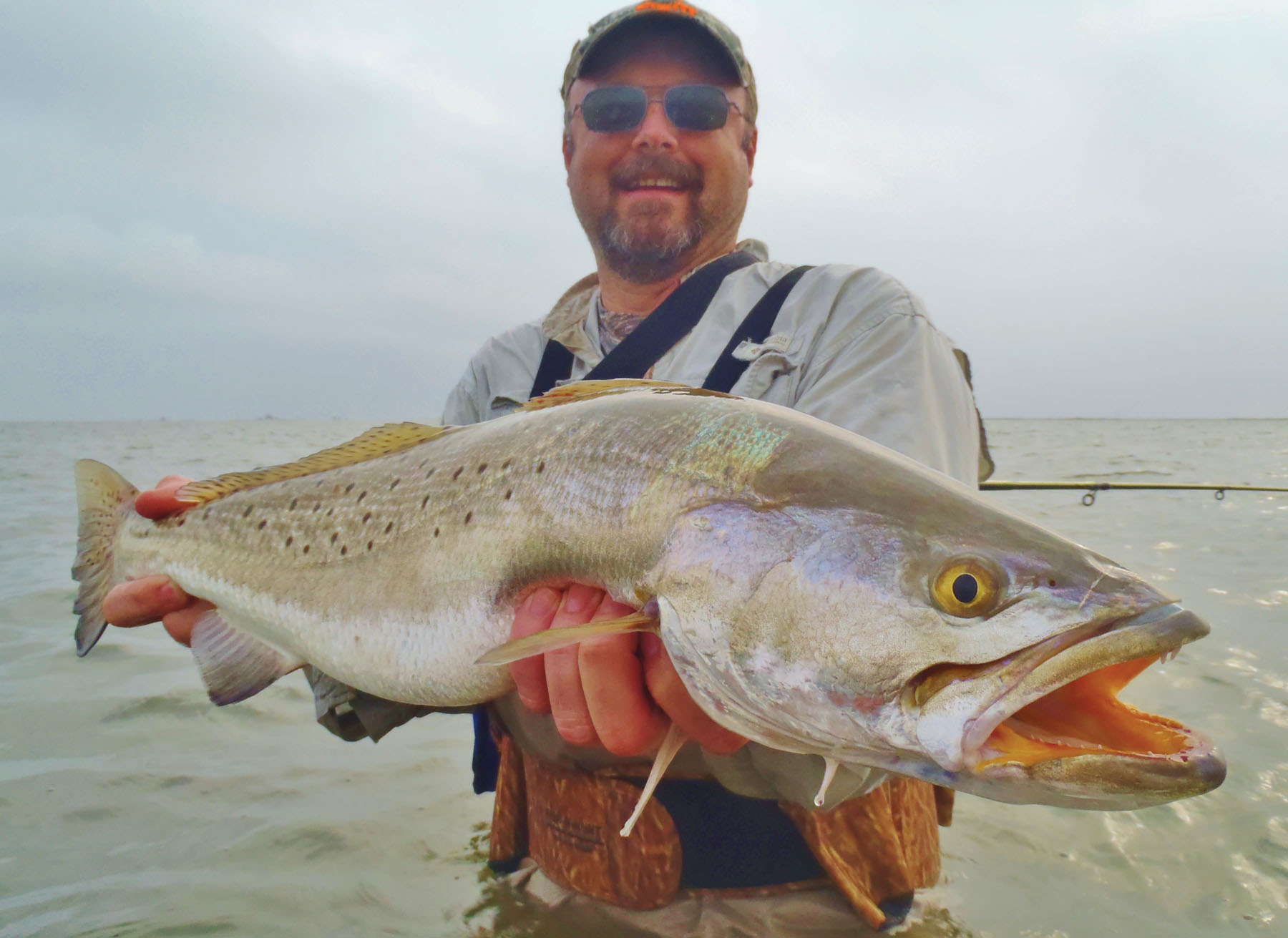 Recognizing when a few, scattered large fish swim within range allows one to grind for a few bites and find success, as did Tim Zbylot on this windy spring day.
I like to fish. I like to catch more than I like to fish. Sometimes, environmental factors make the catching difficult. In times like those, savvy anglers consciously make many seemingly small decisions, which profoundly influence the outcome of their efforts over the long haul. In essence, anglers make choices in order to hedge the bet, and improve their odds of catching.

Scant few absolute truths affect the art of angling. Most truths don't apply one hundred per cent of the time. Still, basing decisions on generally reliable truths and tenets enhances the quest for consistency. Certainly, productive anglers don't run around without a plan, making choices on whims, hoping the stars will magically align for them.

Using sound and solid operating principles does create a more predictable and consistent outcome. Still, the catching will prove slow at times, especially for anglers who choose to use artificial lures exclusively. Often, when I experience slow catching with my customers, two statements will be uttered, normally from a polite perspective.

When things aren't going as we'd like, customers frequently say, "Oh well, that's why they call it fishing, not catching." I appreciate the underlying reasons they say this, and acknowledge the implied truth which serves as a foundation for the statement. All angling efforts involve an element of luck. Making decisions which reduce the effects of luck creates a higher rate of consistency. But, eliminating luck from the equation simply isn't possible.

Certainly, ignoring the need for solid operating principles and sound decisions will elevate the need for luck. Some of my customers seem willing to give up on using reliable tenets, preferring to leave everything to chance. Those folks regularly say the following to me, often when we're discussing lure choice and/or presentation--"Hey, you never know."

Again, the implicit premise driving the statement relates to the fact that most truths aren't absolutes. Still, relying on consistent truths proves far more productive over time than constantly experimenting and hoping to stumble on something that works, moment by moment. In essence, "You never know" is NOT an operating principle at all, it's an admission of ignorance of those principles.

The basic problem for beginning and novice anglers starts with their ignorance of sound, solid operating principles and procedures. No one can rely on something unless they can first identify it. How should anglers go about learning the pertinent operating principles? I say they should beg, borrow and steal them! In the following paragraphs, I will offer up a few important ones.

The arguably most important tenets relate to the timing of the outing and the location(s) where the effort will be made. One should always consider the season and weather when making these decisions. In the colder half of the year, fishing late in the afternoon and into the first hour of night often proves more productive than efforts made earlier in the day.

Conversely, in the warmer half of the year, fishing in the pre-dawn darkness and into the first hour of light shows the highest level of consistency. If pressed, I'd say the breaking of day consistently stimulates a feeding mood in speckled trout better than any other factor. So, serious-minded anglers should consciously fish one "light change" or the other, starting before daylight or staying out until the blanket of darkness fully covers the bay.

While doing so, one should also rely on another sound principle, and remain prepared to properly and safely navigate in the dark, if using a boat. Doing so means understanding how to use the GPS, and keeping the Q-Beam functional and at the ready. Honestly, some people have no business running around on the bays in the dark. Those people will have to find some other way to hedge the bet.

In addition to thinking about the best time to fish, anglers should carefully consider where to stop and make the effort, again factoring in the season and weather. In the colder half of the year, especially while north winds blow and water temperatures drop down low, fishing along leeward shorelines protected from the chilling effects of the winds makes good sense. Areas with structural elements in shallow water lying close to a deep, open basin provide the greatest chances for success in such conditions.

Conversely, in the warmer half of the year, fishing windward shorelines often provides better results. In general, the windy side of a structural element, cove, or even a whole body of water, provides better odds for catching than the leeward side. To a point, of course. Too much wind will render the previous statement false. Understanding exactly what "too much wind" is in a given place becomes important in making the decision of where to fish.

I add one other element into my basic way of operating, as relates to the location. I think of several similar spots within an area before embarking on a journey. If my expectations about signs of life and ease of catching aren't met at the first stop, I'll make a short move to another spot close by, to check those things there. I don't want to crash and burn when I experience a slow start, hoping things change at the first spot, especially if I've gone fishing early in the morning. Making a short move provides more information about the feeding mood of the fish, presence of bait, and other factors.

Once an angler has chosen a time and place to fish, and arrived on the scene, other truths come into play. I target trophy speckled trout when fishing, almost always by wading, rather than fishing from the boat, and those choices affect the principles on which I rely. First and foremost, one should always carry everything needed when wading.

It makes no sense to leave the boat without pliers, leader material, and a few lures. I carry other essentials too – camera, lip balm, measuring tape, swivels, shades....all of which allow me to continue fishing without the need to go back to the boat. This basic "readiness" springs from a hopeful assumption, the faith that we are always on the verge of accomplishing what we set out to do, to catch, photograph and release a big trout. Leaving the boat without all essential items implies a loss of such faith in the outcome.

It's always a good idea to identify the best small part(s) of the area and target it or them, with a plan. Picking the proper pace and direction of movement to carefully probe all edges, structural elements and features inevitably enhances the catching. Doing so means looking at the area in the mind's eye and imagining where fish should be present. In essence, such behaviors create a positive approach.

While maintaining hope, one should narrow the focus in terms of lures chosen and carried along. Great anglers carry and use fewer lures than novices, in general. I normally carry selections in the main three families: topwaters, twitch baits, and soft plastics. Usually, I have a couple of each, the specific colors and types depending on the conditions. I see no reason to carry 40 or 50 selections when wading; doing so reveals a lack of understanding of the basics of lure choice.

Choosing the optimal lure for the moment means understanding some of the general rules related to what conditions best favor each type. Again, the season and weather partially dictate these truths. In the colder half of the year, working "up" from soft plastics toward topwaters makes more sense, while in the warmer half of the year, starting with floating plugs and working toward the bottom-huggers proves more productive.

Specifically, I favor topwaters most when the water temperatures range from about 60 to 85; they seem to be especially productive in the 80-85 range. The floating plugs can and will produce big bites in waters outside this range, particularly in 50-something degree water which has recently warmed up, when this occurs during the second half of winter. Whatever the time frame and water temperature, I always like to see plenty of bait activity on the surface to indicate a high likelihood of a topwater bite.

Wind speeds and water quality also dictate which types of lures will likely work best in a given situation. Calm weather and clear water elevate the effectiveness of small, quiet lures in natural colors, especially under bright skies. Windy weather and turbid water necessitate the use of larger, louder lures, ones with strongly contrasting colors. Such conditions also favor the use of two "lures" in concert with each other, meaning a soft plastic dangled under a float or floating plug.

In addition to affecting lure choice, weather and water quality affect the proper presentation for the moment. Calm, cool weather and clear water suggest a need for slow, subtle presentations, while windy, warm weather and turbid water dictate a need for spastic, noisy presentations involving speed bursts and long pauses. The following fact bears related significance: speed at or near the surface more effectively triggers reaction strikes from fish in hot water, while still or slow-moving lures near the bottom better entice strikes from finicky fish in cold water.

These facts explain why most expert lure-chunkers rely on a low and slow approach in cold water and a high, fast one in hot water. And that's the point, really. Experts rely on various proven principles when making decisions. Doing so helps them hedge the bet in their favor. The ultimate goal, of course, remains the same all the time, to make the effort more about the catching, not the fishing!