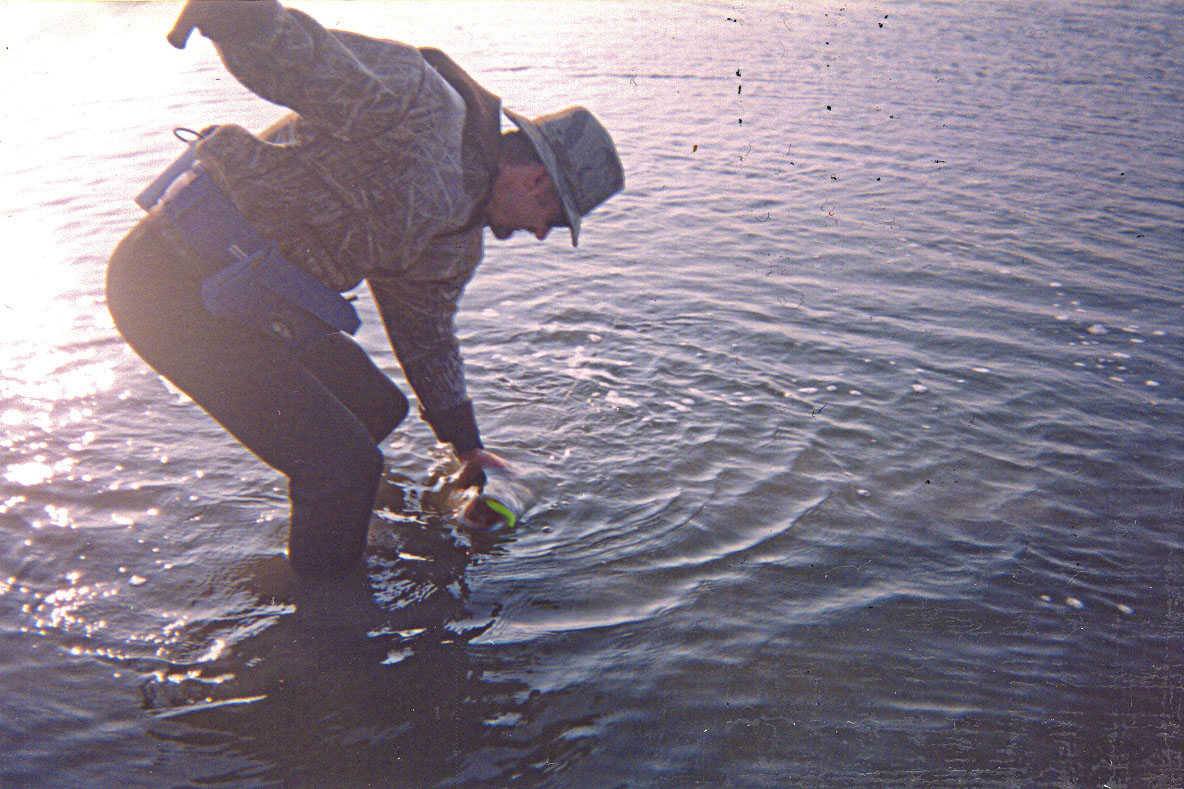 This classic photo proves that trophy trout love shallow water at times in November. I caught and" released the twenty nine inch specimen shown here from water barely deeper than the top of my boots.
November is normally a good month for speckled trout fishing with artificial lures in Texas, particularly along the Upper Coast. Strong north winds usher in cool weather and tide levels rise and fall like mercury in a thermometer, alternately draining, then filling the estuaries.

Shortening days and fall fronts trigger migrations among prey species, presenting a veritable smorgasbord to piscatorial predators during the Thanksgiving month, especially in bays bordered by spacious marshes. The shallow, muddy nurseries provide safe haven to shrimp and other forage species throughout the warm months, but autumn's harsh winds eventually drive all marsh residents into the open bays, and a journey to the Gulf commences.

Shrimp making their way toward the open sea find themselves caught between two predatory species. Trout attack from below, and when the crustaceans snap their tails to flee, propelling themselves to or through the water's surface, sharp-eyed gulls dip and close ready beaks to claim them. Anyone who's fished long enough to remember what it was like to navigate without a GPS knows that seagulls hovering low over the water in a bunch can give away the location of schooling trout.

On some November mornings, squawking flocks seem to stretch from horizon to horizon. The wheeling, diving birds fight over the bounty which rises into their midst and becomes fuel to fatten them for the winter. The sight of such activity causes the hearts of many coastal anglers to flutter; some jockey to be first in line upwind of the action, so they can attempt to quickly fill an ice chest with eating-sized specks. Nothing in fishing creates a more palpable sense of anticipation than tightly-formed, picking birds.

Exploiting the situation to take easy limits is a goal for many this month. Anglers who share my belief that over harvesting by humans is contributing to a decline in the state's trout fishery (and those who simply want to catch bigger specimens) should consider steering away from the dramatic scenario of shrimp sandwiched between serrated silver lips and quick crimson bills.

Other patterns can and will produce bigger specks when the flocks are screeching. Stories have circulated over the years about big trout being caught regularly under birds, especially in East Matagorda Bay. Mostly, those tales are mythical, probably enhanced by the insidious, exaggerating effects of selective memory. I'll step out on a sturdy limb and assert that no one consistently catches trout in excess of five pounds by focusing on working birds.

Anglers who plan and execute other tactics while the birds are working have a better shot at catching some monster trout this month. In Sabine Lake, if salty water reaches the rivers, wading among rafted mullet around north-end reefs and sand flats close to the ICW produces heavy trout in autumn. If freshwater is more of a factor, mud flats near drains along the Louisiana side in the south end of the lake will likely produce better. Wading there can be dicey, as some of the bottom is pudding-soft; experimenting with a prod and moving cautiously are recommended.

Further west, in Trinity Bay, hefty specks can be caught by wading or drifting scattered shell along the east shore from the North Ridge to Smith Point, particularly when tides rise beneath easterly winds. In similar conditions, East Galveston Bay shorelines, namely those along the Anahuac Wildlife Refuge and ones adjacent to drains on the south shoreline, will produce some memorable trout for waders. When water is gushing out of the cuts, the catching can be world class, with numbers of long, fat fish available.

East Matagorda is perhaps the best bay of all for November trophy trout fishing in Texas. Numerous fall patterns work well in the diminutive, muddy estuary southwest of Sargent. When tides are high, the coves on the south shoreline fill up with clear, cold water and magnum trout. Those trout will go extremely shallow at times, especially when the water first begins to warm up after a chilly spell. While water temperatures remain in the low to mid-fifties, the biggest trout in this bay (which does produce double digit specimens) might be found mere steps from the bank.

As the weather warms more, the fish often retreat to the muddy guts and thick grass beds in the middle of the coves and to the dropoffs along the bars fronting the coves. When northwest winds drive the water out and temperatures plummet, trout retreat into the middle of the bay and/or the ICW. While tides are extremely low, fishing on the north side, around the maze of reefs and towheads in this bay's eastern half, produces giant trout, especially for those keen enough to find sweet spots among the shell humps.

Further south, in San Antonio Bay, pulling jumbo trout from shoreline coves is also possible. In decades past, I loved fishing that area when pre-front autumn winds helped fill the lakes between South Pass and Panther Point. Sometimes, schools of whopper trout pull into a lake and stay there until the next front chases them out. Wading the muddy bottoms in those lakes can be a chore, but moving around over large areas isn't really necessary; planting the feet and grinding is wiser in general. A kayak is the answer for some.

Coastal Bend bays undoubtedly produce fewer big trout today than they did in the past. Even so, San Antonio Bay, and others nearby, like Mesquite, Carlos, St. Charles and Copano, with their abundance of marshy satellites, reefs and plenty of mud and scattered shell bottom, still offer some trophy trout potential during this month of plenty.

One Corpus Christi area bay closely resembles Upper Coast bays. While living in Ingleside, I fished this tiny estuary many times, and found November to be one of the best months to catch trophy trout there. Fringed by marsh, like other bays further north, Nueces Bay has crunchy oyster reefs measuring in miles, not acres. It probably has more reefs ideal for wading than any other bay in Texas. Navigating Nueces Bay can be dangerous for the inexperienced, given its mind-blowing maze of shell ridges and piles of discarded oil-field junk; GPS maps don't accurately pinpoint most of the hazards.

All the aforementioned bays offer motivated trophy trout enthusiasts a shot at wall-hangers during the fall months. The best lures for the places identified as top November haunts vary from day to day and depend on the specific pattern fished. In general, warm conditions, onshore winds and rising water temperatures and tides bring conventional topwaters into play, particularly full-sized ones if mullet are abundant in an area.

When the trout move super shallow after a cold snap and are found knee-deep or less, floating Corkys or other silent, subtle twitch-baits will better seduce the sunning sows. In extreme cases, natural-looking soft plastics rigged weightless on worm hooks and fluttered in their faces might be required to buy strikes.

In some post-front conditions, when the fish move into deeper basins, sinking Corkys, Catch 5s, 51 MirrOlures and of course, soft plastics rigged on eighth or sixteenth ounce jigheads work best. If strong winds muck up the water, dangling a soft plastic under a cork can help fish find the worm.

November's whistling fronts help ring in the first holiday of our year-end festival; they also kickoff the trophy trout season, at least for those of us who refuse to use live bait. The second half of autumn is a time for healthy appetites; all kinds of creatures feast vigorously in the waning light before the onset of winter.

Hungry for steady action, some anglers will clamor to compete for their share of the bounty under the birds. Others will ignore the obvious sign to focus on a slower-paced sport, hoping to catch, photograph and release the trout of a lifetime.