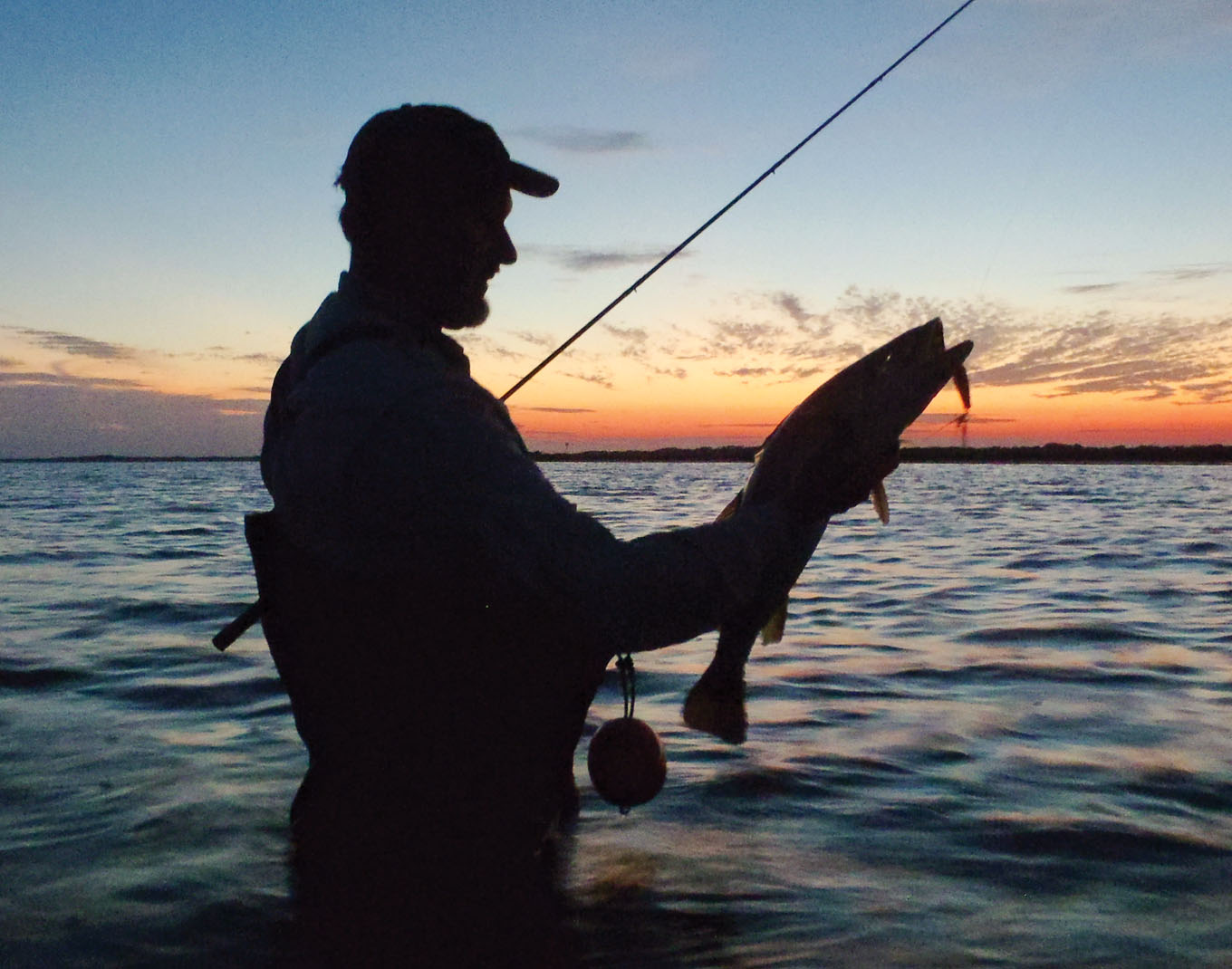 In the October, 2012 issue of this magazine, Megan Robillard and Greg Stunz, PH.D. discussed a recently completed study in which they electronically tracked the movements of speckled trout in the waters of the Laguna Madre and its adjacent beachfront zones over a three year period. The study and subsequent analysis were done objectively and thoughtfully, and I'd like to applaud the two scientists for their work. I'd also like to review and comment on some of their important findings.

Ms. Robillard enthusiastically asserted catch and release does work. Almost three quarters of the trout caught and tagged for the study lived to contribute data. Surely, if trout can endure having transmitters surgically implanted in their bodies, they can survive being quickly handled and carefully released. When I discussed this issue with another Texas Parks and Wildlife biologist, Scott Walker, PH.D., he identified TIME as the most important factor affecting the survival rate of trout caught and released. The longer a fish is held out of the water, the lower the survival rate is likely to be.

This brings up an important point for those of us who like to take pictures of some of the trout we catch. In order to enhance the survival rates of fish after their release, it's important to keep them completely submerged in the water while the camera is readied for the pictures, and even between shots. It's also critical to handle them with a Boga Grip or other device which harmlessly secures them by their lip, rather than grabbing them around the shoulders with one's bare hand.

Ideally, a large trout released after posing for a few pictures survives to produce more of its kind, and to be caught again. In fact, the fish tracked in the study were recaptured at a rate of 17%, supporting the validity of the possibility of managing the trout resource partly as a trophy fishery, through the selective harvest of small keepers. Some of the trout tagged in the survey were large, particularly those obtained at live-weigh tournaments held in Flour Bluff, in the northern reaches of the Upper Laguna Madre.

Ms. Robillard made intriguing comments about the 20 trout tagged and released from the docks after being weighed in tournaments. 15 of the fish generated data by swimming close enough to the receiving stations to provide evidence of their locations after their release. Of those, 14 headed south from the site where they were tagged, while one headed north, into Corpus Bay. Without knowing where these fish were caught, it's hard to draw conclusions from these facts.

It seems plausible that a fish transported a long distance from where it's captured before being released will most likely behave differently than a fish caught and released close to where it's captured. If this is true, the fish obtained from tournament anglers are more likely to provide an inaccurate template for the behavior of wild, unharried fish than those released closer to where they are obtained.

Releasing a trout many miles from where it's caught could render the fish incapable of returning to the area where it was originally found. At the least, a short-term disorientation of the fish seems likely. According to Scott Walker, the most important factors influencing the short-term behavior of the fish released at the docks in Flour Bluff would be aspects of the local conditions at the time of their release, most prominently the direction of movement of tidal currents.

Regardless of my concerns about the potentially misleading results gained through the tracking of trout obtained at tournaments, the study clearly supports one assertion: speckled trout move around over relatively long distances. All of the fish studied, including the ones caught and tagged in the surf, the bays, and at tournaments, showed a tendency to move around, and they made those movements in a somewhat unpredictable manner.

Apparently, surf trout have a greater wanderlust than bay trout. On average, the trout tagged in the surf moved approximately two miles per day, some swimming as far as twelve miles in twenty four hours. The tendency of surf trout to move more than bay trout has been long-suspected by anglers who fish the beach front. Sweet spots are hard to find in the surf; catching trout regularly along the beach means staying mobile and searching for roaming schools.

According to the study, one type of sweet spot does exist in the surf zone: the passes which connect the Gulf to the bays. All the tagged surf trout showed up in or near the passes at some point during the time of the study, suggesting trout which live primarily in the surf use the inlets to make forays into the bays. My own anecdotal evidence clearly supports such a claim; for years, I've noticed improved fishing for big trout on flats close to passes during seasonal changes. Significantly, not one of the surf fish ever provided a ping at one of the bay receivers, meaning none of them moved as far as six miles into the bay. This led Ms. Robillard to conclude surf and bay trout may, in fact, be separate sub-groups, with limited interaction.

The scientists were, in my opinion, conservative in drawing some other conclusions from the data. For instance, they say their study neither proves nor disproves the validity of the Tide Runner Theory, which basically claims fish travel from the Gulf into the Land Cut every spring. I'd venture to say their study does render such an idea implausible, since none of the 22 trout they tagged in the ocean showed up in the Land Cut (or even near it) in three years.

Other long-held beliefs touted by locals with plenty of salty crust behind their ears were challenged by the facts gathered in the tracking survey. Perhaps most significantly, the study did not provide evidence of bay fish moving into the surf. Some people believe trout flee from the bays when water temperatures become uncomfortably low, and when droughts drive salinity levels above normal. Apparently, neither assertion is based on fact, since no trout was shown to move from the bay to the Gulf, despite the occurrence of some of the coldest weather in decades and sustained drought conditions during the time-frame of the research.

The study essentially supports what I already believed about cold-stunned trout in the bays. They ride out cold weather by sitting on the bottom in open basins and channels within the estuaries. I often catch big trout on shallow flats adjacent to such places soon after cold weather turns and begins to warm up. I've never believed those fish were returning from a trip to the Gulf, and the study supports my contention.

The one environmental variable which was shown to cause fish to move in a predictable manner was low salinity levels. The floods of 2010 caused some of the studied fish in the Lower Laguna Madre to move northward, hypothetically in search of saltier water. Perhaps the trout moved away from the sweeter water because it made them uncomfortable, or maybe they were just following the schools of forage fish on which they feed. If a flood event displaces all of a predator's food sources from an area, the predator will surely abandon the place too.

Anglers on the Upper Coast have long known freshwater inflow can cause trout to leave an area. Trout respond predictably to changes in the amount of freshwater flowing into the upper portions of estuaries like Trinity Bay and Sabine Lake. Floods push trout toward the Gulf, while drier conditions draw them toward the river mouths. In the most extreme cases, floods seem to cause trout in riverine estuaries like Sabine Lake to move all the way through the jetties and into the surf.

In big flood events, the surf zones immediately adjacent to the jetties often become crowded with trout. The evidence from a tracking study done on trout in Lake Calcasieu further supports this idea of bay trout moving from the bay to the surf in small bays like Sabine Lake and Big Lake. Perhaps trout inhabiting bays like these behave in slightly different ways than do those living in hypersaline ones like the Laguna Madre, since brackish bays are more regularly influenced by major rivers.

Ms. Robillard suggests the Laguna Madre area might include different sub-groups of trout. It's likely that additional sub-groups exist as well. In fact, I cited a study done by other TP&W scientists several years ago which identified four sub-populations of trout in Texas waters, through genetic analysis of the fishes' bones. No such identification could be possible if all the state's trout were swimming around and spawning with each other.

The study done tracking Laguna Madre trout proves the fish move around more than many people thought. I am a little concerned about the exact words chosen for the title of the magazine feature, though. It's true that Trout have tails...and know how to use them, but I fear some people might glance at the title, or give the article a cursory read, and reach false conclusions about what the study does and does not prove about the movements of our trout.

In the end, the study does show our trout are moving around over long ranges. It also suggests they stay within their identified home regions and populate the regions in sub-groups. It does nothing to support the idea of significant mingling between trout from widely disparate regions. In essence, the study supports the need for regional management strategies for the species more than statewide management plans, but only if considered thoughtfully, within the context of other studies.

Texas Parks and Wildlife should use all available data when deciding how best to manage the state's population of spotted seatrout. This study can become a valuable tool in the ongoing process of learning more about trout and enhancing the strategies used to sustain future population levels of our most sought-after saltwater species.

On the other hand, a truly alarming possibility is raised by the generally useful study. What if a private entity became capable of monitoring the movements of large numbers of trout with a method similar to the one used in the tracking study? Imagine a cell phone app with dots blinking on the screen to indicate the locations of tagged fish! The existence and availability of such technology would certainly be harmful to the fish. Texas Parks and Wildlife should immediately take steps to preclude such a possibility.