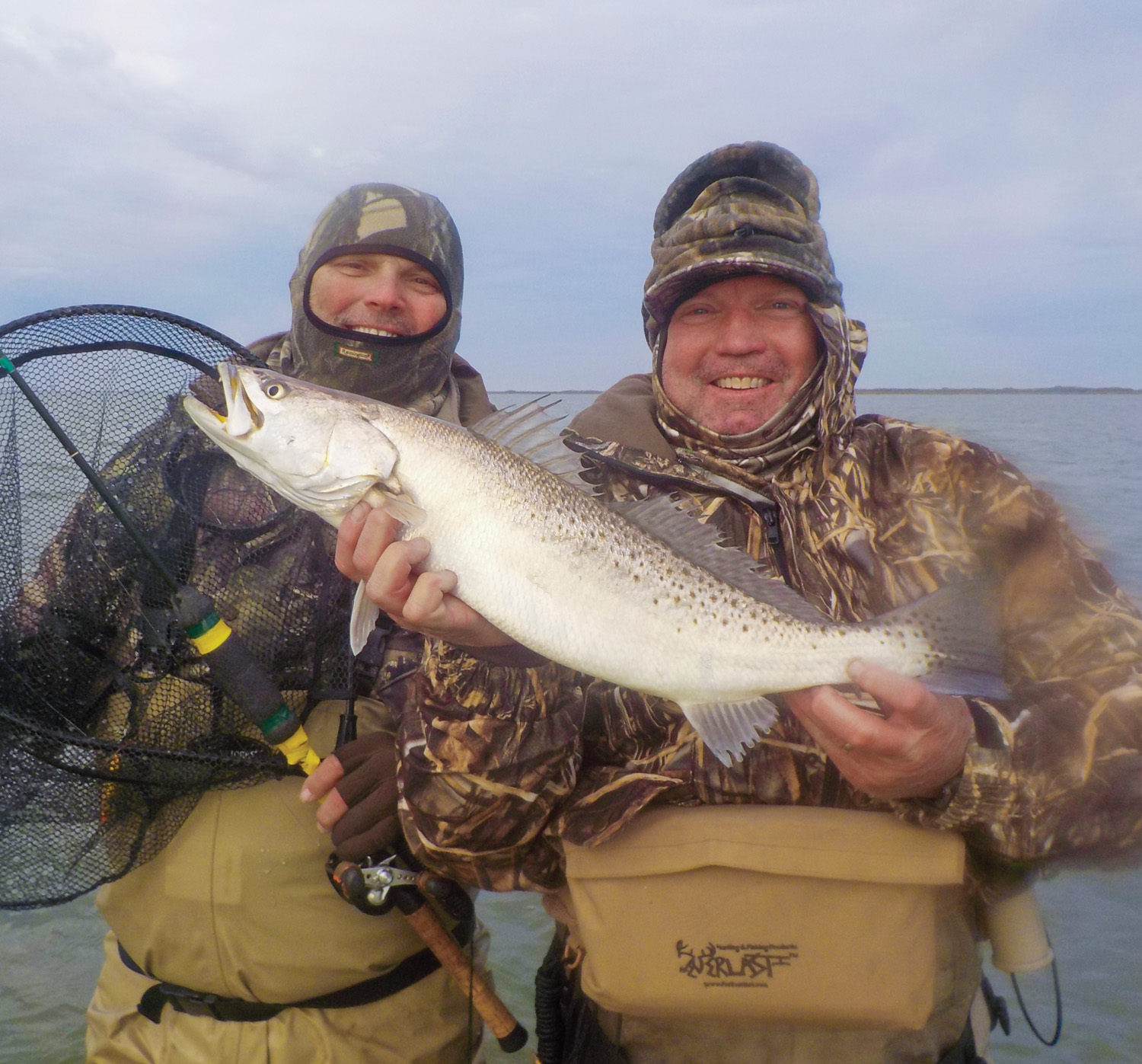 Tommy and Arlis James sharing time on the water on a cold day last January. Tommy caught the big one!

While wading near the King Ranch Shoreline on a calm, quiet morning last December, my customer, Brett Taylor, and I noticed a whitetail buck walking around in the shallows close to land. “Wonder why a deer would go out in the water like that?” Brett mused. I shrugged, and we continued chunking and winding.

Perhaps ten minutes later, an agonized cry shattered the silence of the halcyon day. Instantly, both I and my companion recognized the sound as the utterance of a wild animal. “What's making that awful noise?” I asked, looking in the direction of the buck. “It seems almost like a mountain lion.” Somewhere between a deep, guttural groan and an angry growl, the vocalization lingered, starting and stopping, sending chills up and down my spine.

“It has to be the buck,” Brett asserted. “The noise is coming from right where he is.” I agreed, and we both commented on the sadly mournful tone of the creature's voice. Though primitive and lacking the precise eloquence of human speech, the throaty groans relayed an unmistakable message: “I don't want to die today.”

We continued fishing and tried to ignore the resounding roars emanating from shore, but our attention remained transfixed on the scene. “Hey, I see something else up there with the buck,” Brett remarked. “It looks like a coyote.”We watched the attacker swim back to shore; apparently, the buck had ventured into depths which would not allow its feet to touch bottom.

After a few minutes, the beleaguered deer walked back onto the sandy bank, and we watched the predator rush toward him and pounce. The wails spewing from the snout of the deer reached a fever pitch, as the coyote's strangling fangs pierced his throat. The potential prey succeeded again in freeing himself from his assailant's grip and trudged back toward deeper water.

Eventually, when the depth of the water forced the coyote to swim, the predator gave up and returned to land. Exhausted, the hapless buck stood still for a moment, his head and ears drooping, eyes cast down. After a couple minutes, he began moving laterally through the water, away from his harasser.

“He must be injured or wounded. Probably escaped a hunter who shot him, and now the coyote is trying to finish him off,” I surmised.

“He's moving pretty good, though,” Brett observed. “Looks like he's getting a fair distance away from the coyote now.”

When the buck circled back to land, perhaps seventy or eighty yards from the canine, we watched the assassin race over the sand and attack again. Splashing sounds provided a background to the pitiful cries of the buck, as he sought refuge in the water once again. Like before, the coyote eventually returned to shore, when the buck reached water too deep for it to stand.

The fourth time the whitetail returned to land, we watched the coyote leap, knock the deer down, grab his throat and snuff his horrific protests. My customer and I felt a sense of relief when the grunts and groans ceased, replaced by a seemingly profound silence, imbued with new meaning in the wake of the poignant and dramatic cacophony.

“Nature can be so cruel,” Brett said, shaking his head. “I feel bad for the deer.”

“No doubt,” I concurred. “That was gut-wrenching.”

As we continued fishing, my mind began ruminating over the events, and I realized something significant about what we'd witnessed. We had not gone out on the water hoping or expecting to see such a grave event. Both of us felt somewhat unnerved, watching the coyote tear into the fallen carcass of the whitetail, as crested caracaras and turkey vultures gathered along the boundary between land and water, waiting for their chance to share in the spoils.

Mostly, as humans, we tend to think of ourselves as isolated and insulated from such graphic events, cocooned in our own civilized realm. We feel separate from nature, free from the weight of her stone fist. But this is a false and delusional perception. Human beings not only dwell in the natural world, we play many important roles in the interconnected web of life it sustains.

While I twitched my rodtip in a rhythmic fashion, attempting to impart lifelike movements into the sinking Fat Boy on the end of my line, I began to perceive our activity in a new light. As I tried to trick a trout into striking my lure, I ironically worked to make the fish play a dual role in my desired scenario, appearing as both predator and prey. If I could turn the speck into the Fat Boy's coyote, I could also become the trout's coyote and transform the fish into my whitetail buck.

The line lay between me and my lure, moving in response to my rhythms, potentially plunging me into a complex, yet natural scene. Basically, I wanted to start a fight, to send vibrations trembling up through the line and into my arms, so I could experience the trout's will to survive in an immediate and tactile sense. If I could artfully seize upon the trout's need, I could succeed in gaining an upper hand in a dramatic duel, and spin my own sector in the metaphorical web.

Like a silent version of the buck's death throes, or the bass thumps accompanying the lyrics of a song, the thrashing and tugging of the trout against my weight would provide tangible evidence of the serious nature of the plight playing out in the soul and mind of the creature on the other end of the line. While I contemplated these things, I hooked and caught a little male trout, which made several audible croaks as I extracted the hooks and returned him to the water to swim again. Though less powerful and resonant than the buck's final screams, those croaking sounds carried the same undeniably clear message.

One principle governs the grunting trout and the wailing buck. The truth relates to the scientific law of inertia. Stated in terms of physics, the concept reads like this: an object tends to preserve its present state. An object at rest tends to stay at rest; an object in motion tends to stay in motion.

When translated into the realm relevant here, the concept of inertia might be stated like this: living organisms cling to life; they resist anything which might bring about their demise. This mantra governs not only the coyote, the buck and the trout; it also exerts authority over human life.

My customer and I did not need to eat any of the trout we caught that day in order to sustain ourselves. In fact, we released all of the approximately fifty trout and redfish we caught.Though we did not need to kill and eat the fish in order to survive, we desired to prove we had the skills which would allow us to do so. Our outing did not include a direct search for a means of sustenance, but it did include an indirect search for one, a quest sourced from our own tendency to perpetuate our condition as living, breathing creatures.

Some people eat most of the fish they catch, creating a clear connection between the activity and what we might call their survival inertia. Others fish more for sport than to accumulate bags of filets, but even those folks find motivation in the internal forces which spur them to make forays onto the water, in attempt to connect with their potential prey.

I've typed it before and will type it again – we fish to keep our souls alive. Within our souls, the battle between good and evil takes place. In this case, fighting for survival is good, and giving up the fight is bad. The act of catching fish takes all of us back around to a central place in our souls, one where people hunt and kill in order to feed themselves and their kin. Our ancestors lived and died in such a place, though modern humans tend to think of ourselves as far removed from it.

The plaintive wails of the dying buck caused my customer and me to feel discomfort that December day, specifically because the sounds slapped us in the face with a reminder of our own mortality. Like the buck, we will meet our coyote someday. The assailant will not likely appear suddenly, its lips pulled back to reveal sharp fangs, probably won't growl and relentlessly chase, nor sink its teeth terribly into our necks.

Our assassins normally have no legs, faces or voices, they usually do their dirty work without snapping and snarling, but they operate with the advantage of inevitability on their side. We know our coyote is coming, yet we soldier on, cloaked in a necessary and superficial state of denial.

In the end, we share the same plight as the buck, the coyote and the trout. While we can, we smile, laugh and cry; we fight the good fight. We chunk and wind, raise an arm, shake a defiant fist against the sky. At our best, we rage proudly against the machine, our spirits buoyed by the hope of another new day, striving to delay the onset of that long, dark night.