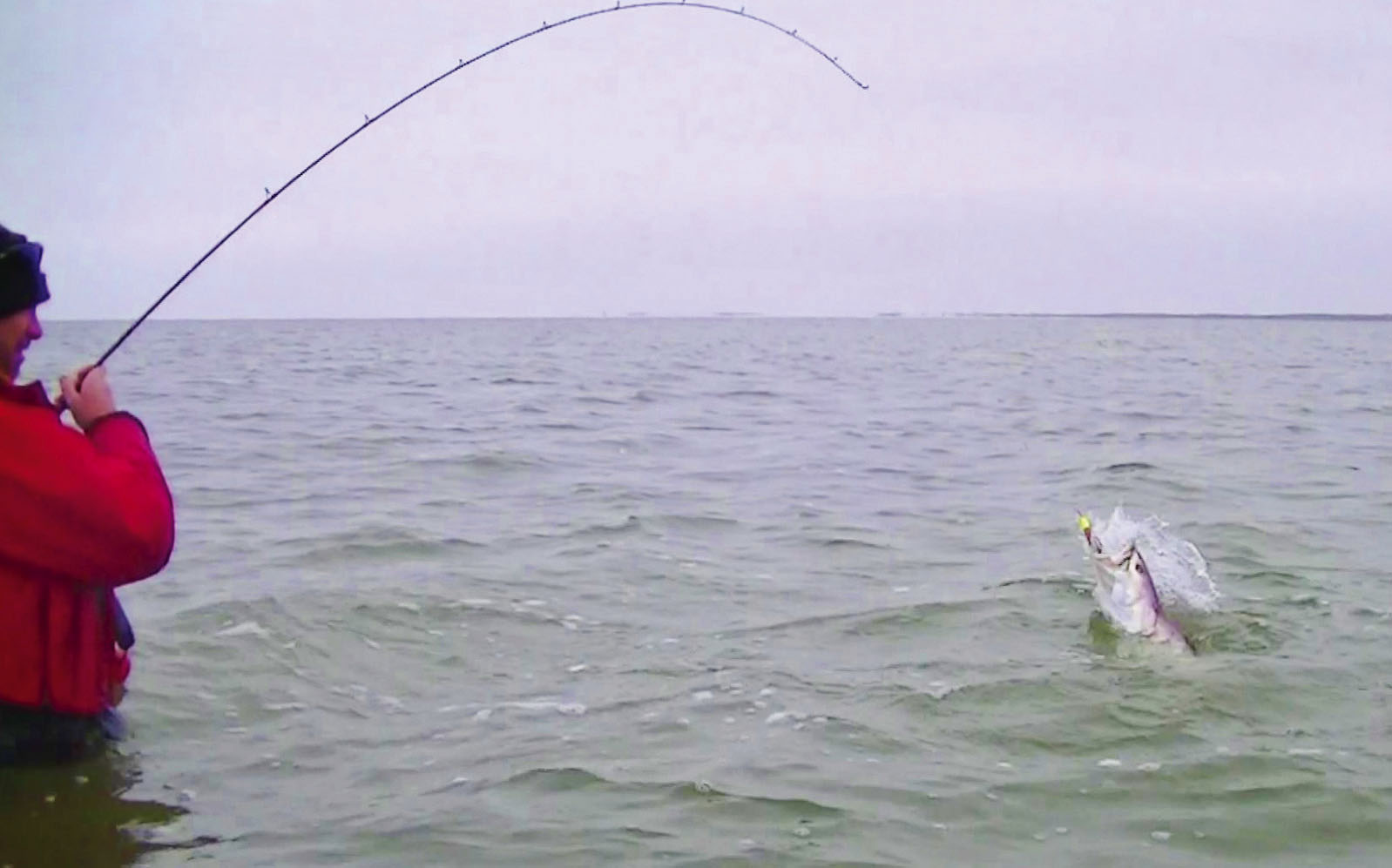 Primetime Trout Tactics shows several monster trout fighting to escape the anglers who hooked them, and attempts to explain how the events unfolded.
I recently created a new video titled Primetime Trout Tactics, primarily using footage I shot on charters last winter and spring. The content of the movie focuses on generating a list of strategies and tactics which help maximize productivity in catching monster trout during perceived moments of prime opportunity. In addition to the images captured on the water, I incorporated several charts similar to the ones I used in my first DVD, Advanced Trophy Trout Tactics (ATTT).

The charts graphically represent beliefs I have about lure choices and presentations as they relate to seasonal and conditional variables. I generated studio narration to summarize and clarify the content of those graphics. Most of the audio for the movie, I recorded in "real time", while shooting the footage, so it presents the concepts in a casual manner, much as I would while talking to my customers during a charter.

Because I shot the footage with my new HD video camcorder, the quality of the images exceeds anything I've produced previously in a commercial fishing DVD. Additionally, I've become more skilled at making, editing and polishing videos, so the movie translates well to the television screen. Most importantly, it provides lots of useful information to people interested in becoming more proficient at catching big trout on artificial lures.

In one way, Primetime Trout Tactics resembles a combination of my first two DVDs, because it documents the catching of a good number of really big trout, like Trophy Trout Documentaries, while offering ample advice to help the viewer catch some of their own, as did ATTT. Because I and my clients caught so many big fish during the time-frame in which I shot the movie, we captured some rare fish on the screen, up to ten pounds and 32 inches! I tried to focus on the facts most relevant to the catching of those trophies while narrating the action.

Among other things, the movie attempts to relay some prevalent truths I've discovered related to the timing of outings in winter, and to emphasize strategies which help me consistently produce big bites during prime-time. In the end, consistently catching monster trout results from the thoughtful planning and execution of specific strategies, not from random, dumb luck. Some of the strategies or concepts might appear simplistic on first glance, but I include them because I see so many people making the mistake of not following their creeds.

The messages in the DVD reference when, where and how to catch more monster trout. They do not specifically apply only to the Baffin Bay/Upper Laguna Madre system; they apply most anywhere trophy trout are found. Having fished and guided on trophy trout excursions from the Land Cut to the Louisiana Shoreline, I believe a trout is a trout, meaning the basic concepts which govern consistency in catching them apply everywhere.

I've learned over the years that people want to glean useful information and tips from a product of this kind, and I've attempted to include plenty of practical content in my new movie. I've also done the best I can to make the images enhance the entertainment aspect of the piece, to meld its authentic documentary component with its informational and educational purpose.

To date, my most successful DVD, in terms of number of copies sold, has been ATTT. Since selling the last of my replicated copies, I've been burning discs one at a time, but will be discontinuing that process. Primetime Trout Tactics will replace ATTT in my Complete Works sets. The price of the new DVD will be $18.99, to include cost, tax, shipping and handling.

This new fishing movie isn't the only commercial video I've created recently. I also spent considerable time and effort this past spring generating a product to commemorate and celebrate another activity for which I have a growing passion. During the spring migration, I shot over 1,000 clips of birds and other wild creatures, and have generated a high-definition video which attempts to capture their beauty and essence.

As I finished the product, I came up with about thirty minutes of HD footage which includes over sixty species of birds and other wildlife. I offer this product burned on a Blu-ray disc, because I want the quality of the images to transfer optimally to a big-screen HD television. I've become something of a birding fanatic, having shot nearly 5,000 clips of birds over the last three years. This is the second commercial "bird movie" I've made. Prior to this past spring, I shot all my footage with a standard-definition camcorder, and I always experienced disappointment when I viewed my footage on the big screen.

The use of an HD camcorder fixed that problem for me! As consumers, we've become spoiled in a way, accustomed to the sharpest, clearest images on our televisions. My Blu-ray disc delivers the same kind of extraordinary footage, presenting the best kind of eye-candy to nature lovers of all kinds, especially those with a specific interest in our feathered friends.

Mostly, when I go birding, I try to capture images which clearly depict the beauty of the various species I encounter. I've worked long and hard to develop skills with the camera which allow me to accurately document these splendid creatures. While doing the work, I realized something else was happening, almost accidentally. I also document many aspects of bird (and birder) behavior in my clips.

So, in this movie, titled Spring Migration 2014, I have attempted to document the physical beauty of the birds, but I've also tried to show how the birds interact with one another while sharing space during their long and arduous migration, and also the way bird-watching works for me.

Some clips capture birds jockeying for a spot at the watering/bathing hole, while others show them deciding who gets the next turn at a food source they've found. I've also recorded mating rituals and dances, fledglings demanding food forcefully from their parents, and hunting strategies in action.

In the audio of the movie, I've narrated things much in the same way I did in my fishing movie, providing real-time commentary while shooting the footage. I also captured the voices of birding enthusiasts around me; their passion for the birds rings through loud and clear, enhancing the entertainment aspect of the piece.

Both birds and birders are plentiful in the Corpus Christi area during the spring migration. My home sits in the middle of a mecca for people who love creatures with wings, because most of the flyways used by our continent's migrating birds pass through here. Consequently, we see some unusual and rare creatures on our forays into the field during this time-frame.

While making my movie, I added several species to my current life-list. I had the honor of capturing a Yellow-billed Cuckoo as it displayed a unique hunting technique in an open area surrounded by towering oak trees. I also sat close to a foraging Palm Warbler for over an hour, marveling at its movement pattern and the elegant simplicity of its plumage.

This year was "slow" for warblers, according to some of the more experienced birders I talked to, yet I captured good footage of some fairly uncommon species, including the Bay-breasted, Chestnut-sided, McGillivray's and Mourning Warblers. Additionally, I regularly got good shots of Black-throated Green, Yellow, Magnolia, Tennessee and other species of warblers.

Orioles, Tanagers and Buntings appeared in gorgeous flocks at times. I shot amazing footage of several species of these, including Baltimore and Orchard Orioles, Scarlet and Summer Tanagers, and of course, Indigo and Painted Buntings. An immature male Lazuli Bunting lingered for at least a week at one of my favorite sites, and I captured him several times, once while he barely avoided a hungry Coachwhip snake at the watering hole!

One never knows what one might see when visiting Paradise Pond in Port Aransas or Packery Park Oak Motte on North Padre Island. These places, long revered by birders, have become dear to me too. I offer this educational and entertaining Blu-ray disc with a dual purpose. For one, I hope to entertain other people who've already been bitten by the birding bug. For another, I hope to stir up interest in nature lovers who have not yet figured out how rewarding and fun bird-watching can be.

Spring Migration 2014 can be purchased for $9.99 on the Captain Kev's Products page of CaptainKevBlogs.com. A trailer for both these movies can be viewed on the Pics and Vids page of that website. Primetime Trout Tactics can be previewed on the home page of FishBaffinBay.com.