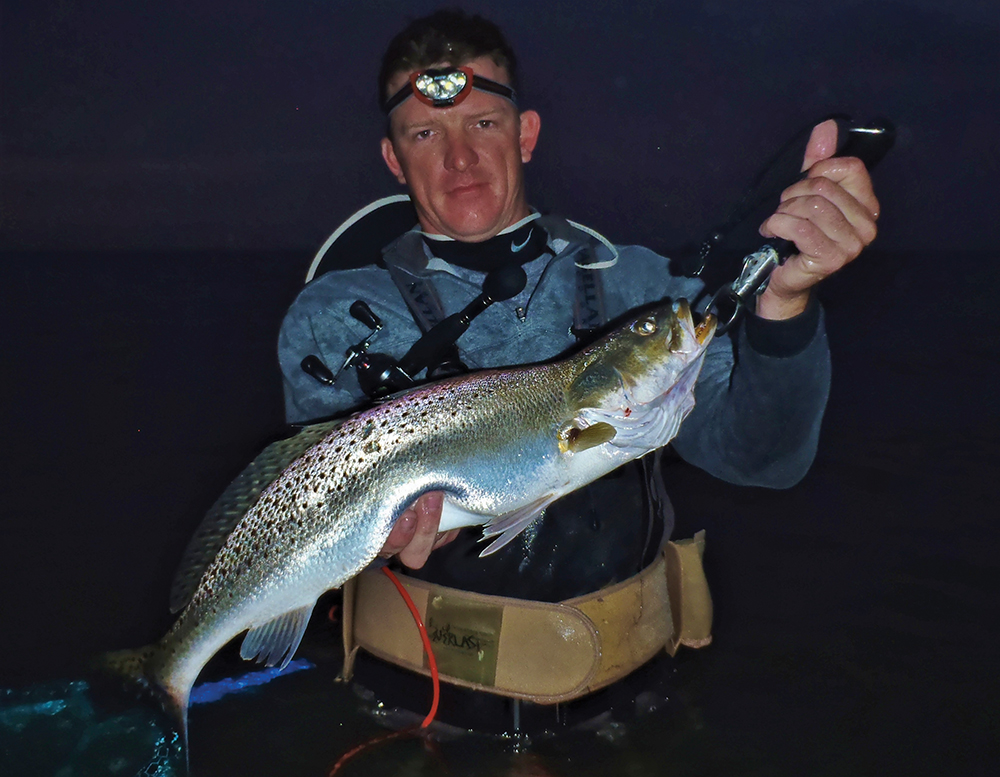 Fishing in the dark often produces good catches of big trout during the cold half of the year, especially in places holding water of exceptional clarity. Such was the case where Randy Slocum caught this handsome specimen.

When Johnny entered the establishment on Park Road 22 late on a cold November eve, he saw just a few other patrons in the place. Most sat outside on a patio, smoking, swilling beer, chatting among themselves. A couple sat inside, on the opposite side of the circular bar. Johnny plopped down on a rickety vinyl stool close to the door.

Missy, the barmaid, knew the young guide well; without asking what he wanted, she brought him a Blue Moon, garnished with a sliced orange. The two nodded to greet each other. “Holler when you need another. I'm goin' outside to smoke,” the slender, tattooed tender announced, holding up a cigarette.

A moment after she walked away, the front door of the dive creaked open, and a whoosh of chilly air brushed Johnny's cheek. He turned to see a man stepping through the portal, recognizing him instantly as one of the local fishing legends. A shock of weathered blond hair stuck out around the rim of a dark, tattered cap, making the old salt's head look like a withered sunflower. His blue irises blazed with light, framed by his tanned, creased face.

The newcomer walked right over and sat down on the stool next to Johnny, who turned to him and said, “Missy went out on the patio for a smoke. She'll be right back.”

“No worries. I ain't in a hurry,” the man softly answered.

“Hey, come to think of it, maybe you'd know something about what I saw the other night, while I was out wading,” Johnny surmised.

“You're probably gonna think I'm crazy when I tell you,” Johnny admitted, shaking his head gently back and forth.

Johnny laughed, looking hard into his elder's azure eyes. The man's striking countenance suggested he knew more than he would ever reveal about most anything the two might discuss. “Well, get this. I'm out in Alazan a couple nights ago. Right when the wind laid after that last front. You familiar with the back of Alazan?”

Sandy shrugged. “I might know a thing or two.”

Johnny continued, “I was behind the last big sand bar, you know, where the pile of gravel or whatever covers the bottom.”

Sandy smiled, his lips curling upward under a bushy white mustache. “Small world. I was out that night too, just down the shoreline, at the mouth of Comitas Lake.”

“Naw, really? Did you see anything strange happening on that point? Where the little stand of brush grows on the end of the bar?” Johnny asked.

“Strange? What do you mean by strange?” Sandy countered.

Johnny plucked the orange from the neck of the bottle in his hand and took a swig of beer, before responding. “So, I'm standing on the north side of the bar, making long casts toward the brush on the point, working a bone Spook over the top of that pile of rubble. I was getting these huge blowups, had caught one trout about 29, another 27. I don't know what they weighed, but they were fat. I've always had good luck back there in the fall after a light front blows itself out.”

Johnny chuckled, “Oh no. That wasn't the weird part. I'd been there about an hour, and had caught just the two fish, had maybe five or six other blowups, when I see this orange light emerge on the ground beside the brush on the point. At first, it's really faint, like a jack-o-lantern, but as I watched it and eased in a little closer to the bar, it got brighter. Eventually, I could see flames. It was a campfire.”

“As the flames built up, I could see a man sitting on the ground on the right side of the fire, stoking it with a stick. Then a second man walked out of the darkness, into the circle of light, on the opposite side of the flames. Dude was barefoot, tall, with really long, black hair. He was wearing some kinda deer-skin britches. This tiny dog hopped around his feet. Looked like a chihuahua, not very hairy. Weirdest part was this--the second guy had a giant spider in his hand. Reached across the fire and handed it to the one on the ground. He impaled it on the stick and started roasting it in the flames, while the other sat down.”

“Dog Lovers eat tarantulas when they get hungry enough.”

A nervous chuckle moved Johnny's chest. “The whole thing freaked me out. I tried easing closer to get a better look. Soon as I stepped on the gravelly bottom, at the edge of the pile, the flames began to dim. I took maybe two more steps toward the point, and the fire just disappeared. Everything in front of me went pitch black again,” Johnny whispered, looking around, as if to make sure others hadn't heard him. “The hair on the back of my neck is standing on end.”

Johnny drank most of the beer from the bottle. Sandy stared at him and asked, “That's it?”

The young man shook his head, “Well, no.  Not all of it. I backed off the pile and started trying to concentrate on what I was doing again. Got this massive blowup. Sounded like somebody dropped a cinder block in the water. I remember cussing and looking down when I realized the fish didn't stick. When I looked up, I could see the embers glowing again.”

“I felt nervous. But I was more curious than scared, so I started inching toward the point, and like before, flames emerged from the glowing pile. This time, I could see two cowboys, one on either side of the fire. I could barely make out their horses a little ways to the left, at the edge of the light. They had built this frame over the fire, and had a pot of something cooking on it.  One on the right reached in with a big spoon to stir the food from time to time,” Johnny explained.

“That's what I thought too. I actually whistled at 'em. But they never turned their heads. Same thing happened when I walked closer to the point. Soon as I could feel the rocks under my feet, the flames dimmed, and before I could get to land, the light disappeared again.”

“How long you been afraid of ghosts?” Sandy abruptly asked.

“Ghosts?” Johnny laughed. “I don't believe in ghosts. Still not sure how to explain what I saw, though.”

Sandy shook his head slowly, in a deliberate manner, neither smiling nor frowning. “You need to stay off the beach at night. You wouldn't last two hours down at the Devil's Elbow under a full moon.”

Johnny shuddered, squeezing his shoulders together and raising them. “What the hell, man?  Still creeps me out,” he muttered, before walking into the bathroom, to relieve himself. When he came back out, Sandy no longer sat on the stool beside his. Looking out the back door of the place, Johnny expected to see the venerable angler joining the others for a smoke on the patio. He did not. Missy returned to her station behind the bar.

“You ready for another?” she asked Johnny.

The boyish captain nodded his head affirmatively, “Yep. Beer me. Hey, did you see where Sandy went?”

As the bartender handed her customer another Blue Moon, her face revealed confusion about his question. “You mean the fisherman with the long white hair who used to sit on that stool when he came in?” She pointed at the empty cushion next to Johnny.

“Yeah. I was talking to him before I went into the bathroom.”

“Oh, I thought you knew. Ol' Sandy passed away several months ago. Some of the regulars went to his memorial.”

The glow in Johnny's cheeks turned instantly to ash; he emptied all the brew from the bottle in one long gulp.