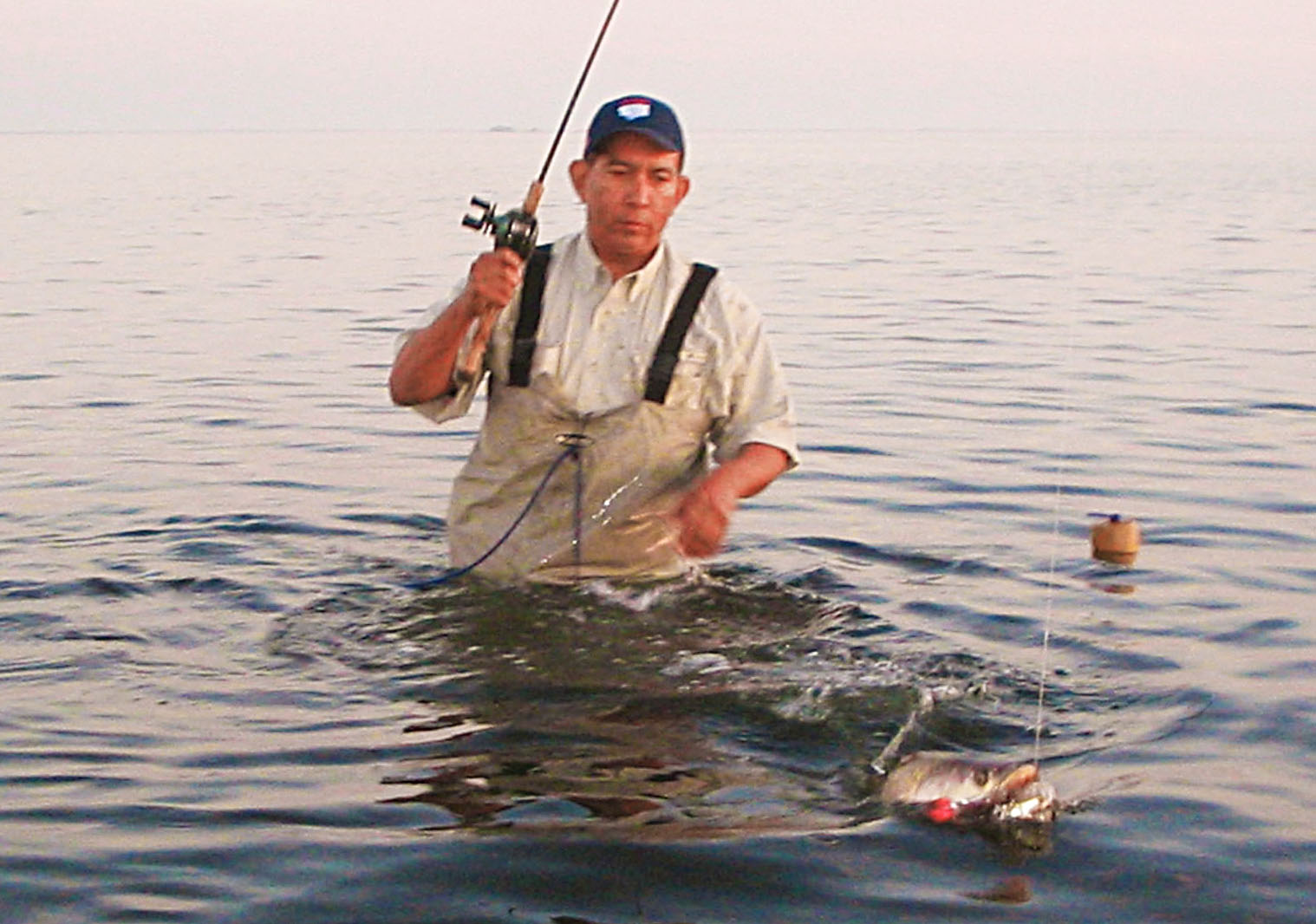 In the gloaming, just before dark, it's often possible to catch big trout on topwaters in December. Hector Saucedo hooked this one on a Super Spook Junior.

Others gratefully acknowledge the positive effect the hunting seasons have on our coastal bays. We who fish year-round feel liberated on the wide-open, uncrowded waterways. From the Louisiana shoreline to the flats of South Bay, the Christmas month offers tremendous trout fishing potential for motivated, educated, properly equipped Texas anglers.

Admittedly, December fishing, like the month's weather, is unpredictable and prone to rapid changes. Passing fronts generate relatively short periods of frenzied activity, followed by longer lulls. If a prolonged warm-up occurs between northers, a real bonanza is possible. Undoubtedly, fishing productivity will be closely related to the timing of the trip and the specific location where the effort is made.

Along the Upper Coast, in estuaries like Sabine Lake, Trinity Bay, West Galveston Bay, and East Matagorda Bay, most or all of the major bait fish and shrimp migrations will be winding down sometime around Thanksgiving and will be over well before Christmas.

Coastal Bend estuaries are similarly affected, though the migrations might linger a little longer. In the hyper saline lagoons south of the JFK Causeway, migrating herds of bait will become concentrated near the passes to the Gulf this month. They'll likely ride the falling tides out of the bays entirely at some point. Statewide, the easy days of finding flocks of gulls hovering over schooling trout will be gone.

Both the fish and the human beings who chase them will be forced to change their habits. With less variety in the available menu, speckled trout will commit cannibalistic acts in order to survive. They'll also focus and feed more on mullet. Locating the relatively sparse schools of forage is therefore a critical step in locating trout this time of year.

Sometimes, finding the bait is difficult, particularly when the schools of mullet suspend or move deep and hug the bottom. Savvy anglers learn to make predictions about where the fish should be and rely on their predictions on days when bait activity is scarce. Understanding how cold weather affects the behavior and movement patterns of the fish is an important part of consistency during this transitional time.

Many of the mullet and trout seek warmer water and move to deeper basins and channel edges within the bays when water temperatures dip into the fifties for more than a day or two. Consequently, people interested in targeting numbers of fish will find working deep, open areas and drop offs to be productive.

In Sabine Lake, the reefs and holes in the south end are worth a try, as are the edges of the rivers and channels. Deeper reefs in Trinity and East Galveston Bays, and the vast expanse of scattered shell off Greens Cut in West Bay, all hold numerous trout, as do holes like Offatts Bayou and Moses Lake. In East Matagorda, areas with a mix of mud and shell near open-water humps produce plenty of trout when winds are relatively light.

Further south, similar open-water reefs and areas of scattered shell in bays like San Antonio, Mesquite, Aransas, Copano, and Nueces have tremendous potential for producing limits of eating-sized trout at times. In the Laguna Madre, many regular-sized trout hang along the edges of the ICW and in channels which intersect it. Relatively deep holes like Emmords, Beacrofts, Yarbrough, and the waters north of the Queen Isabella Causeway offer cold trout some relief.

Of course, some people share my obsession for targeting trophy trout, so they focus on different types of areas in their hunt for wall hangers. Most of the monster trout I've caught in December were caught in water depths ranging from about thirty to forty eight inches, (crotch to belly-deep on me). Occasionally, bunches of big trout move much shallower than that, in response to cold snaps.

Once the weather turns and temperatures begin to rise after the passage of a strong front, some of the sow trout will move shallow, since the shallowest water warms up first. Though bright sunlight can coincide with such a move, it isn't necessary. If arctic air causes water temperatures to plummet into the forties, knee-deep flats will hold fish on the back side of the blast.

The best flats are those along shorelines protected from north and northwest winds, where shallow areas are relatively close to deep, open basins or channels. Wading is often the best (or only) way to coax cold-stunned fish into biting.

Areas famous for this kind of fishing can be found around the islands in the north end of Sabine, as well as tight to the canes on the Louisiana shore. All of the Galveston Bays have areas with the right mix of shallow water next to deep, particularly Upper Galveston Bay and the upper end of West Bay.

The muddy flats, guts and reefs immediately adjacent to the ICW in East Matagorda produce whopper trout in early winter, as do areas on the north shorelines of Corpus Christi and Nueces Bays.

The King Ranch Shoreline (indeed the entire west side of both Laguna Madres) is justifiably famous for producing big trout during this season, as are flats, rocks and drop-offs along the north shoreline of Baffin Bay. Regardless of which part of the coast they target, trophy seekers should embark with a clear awareness of where the weather lies on its circle of change.

On warm days in December, trout sometimes take topwaters for hours on end. On colder days, before the weather makes a true turn, the same fish might be impossible to entice except with a soft plastic dragged inches in front of their noses. Mostly, the reality of the situation lies somewhere between these two extremes. In many cases, Corkys and other slow-sinking twitch baits are the best lures to deploy.

It's wise to base December trophy trout strategies on some broad generalizations. One such plan is to assume its easier to locate fish with soft plastics and start off each day throwing those, then move up through the twitch baits to the topwaters if and when the catching gets easier.

A related, useful notion is the idea that fish are easier to catch higher in the water column in warmer weather. Pre-front conditions, with onshore breezes and moderate temperatures, are more likely to generate potential for floating plugs, while post-front conditions, with offshore winds and colder temperatures, most likely necessitate the placement of soft plastics low and slow.

In fact, it's wise to work all lures slowly; cold water creates sluggish fish. Sluggish fish react slowly to everything, so creeping lures fit more naturally into the estuarine environment when its chilly. The need for subdued presentations and reduced speed is greatest when the weather is on the negative side.

Another rule of thumb indicates the hours right around dusk often offer the best potential to catch fish in December. In some places on the Upper Coast, night fishing is far superior to daytime fishing this time of year. Shallow reef systems which seem void of life all day can produce numbers of fat, aggressive trout after darkness descends, especially given good tidal movement.

Similar changes in the mood of the fish can be observed in southern bays too. Many times, after struggling to scratch out a few bites through the afternoon, I've caught numbers of big fish in the gloaming, particularly when some other celestial event happens while the sun is setting. It can be a good idea to sleep in and fish late during December.

Armed with a positive attitude, patience and an awareness of where to target fish, people can catch plenty of trout, and big ones too, in this holiday season. For me, December is one of the most consistent months for catching picture fish. I've personally caught several thirty-inch trout during this time frame; I've also documented a high-percentage chance of someone in the group catching a specimen weighing seven pounds or more.

Truthfully, I'm normally not as busy as I'd like to be this month, probably due to the aforementioned effects of the hunting seasons. Perhaps some of you out there would like to help me with that problem! I know I'll be chasing double-digit dreams, whether alone, with friends or with clients, whenever the weather gives us a chance during this time of change, celebration and opportunity.

Many magical sounds fill the air this time of year. In one day, it's possible to hear the specked bellies plaintive wail, the whoosh of passing fleet-winged teal, the rattled horns of rutting bucks, and of course, resonant blasts heating the blue-steel barrels of hunters guns. I love all those sounds; each has a place in my heart and stirs fond memories.

But what I love most about spending time outdoors in December is not a sound at all. Mainly, I cherish the comforting quiet of our uncrowded bays, where I often find serenity in a silent inner sanctum, far from the clutter and clamor of the concrete jungle.