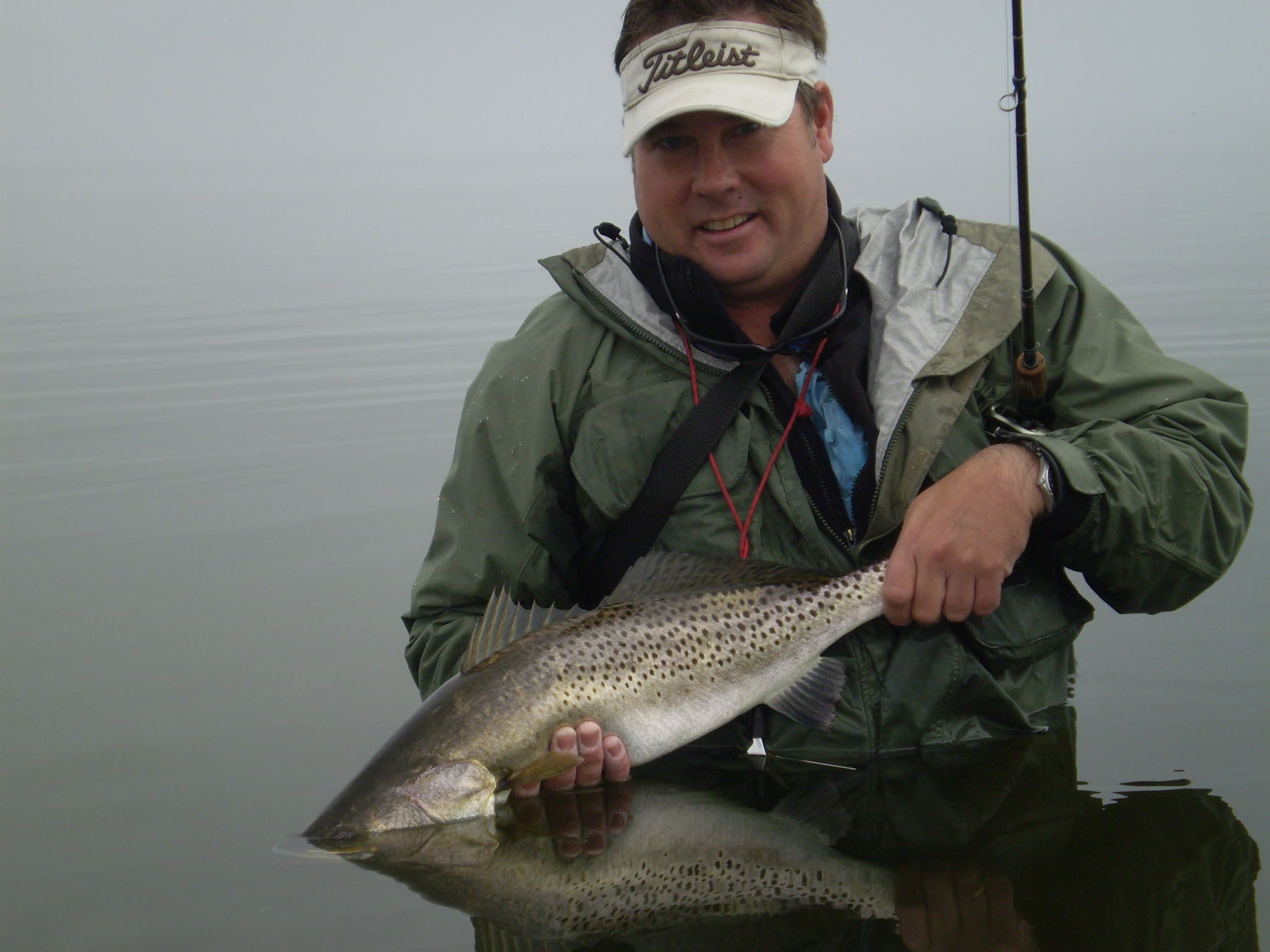 Angler Keith Montague is no Karankawa. He’s seen here releasing a prized catch after working for quite some time to catch it.

Author's Note: I learned much of what I know about the Karankawa Indians from a fascinating, informative book by Gary Cartwright titled Galveston: A History of the Island. I hereby acknowledge Mr. Cartwright's contribution to the following piece.

Numerous warlike Native American tribes inhabited coastal Texas when Europeans arrived here. One has been more misunderstood and maligned than all others. A mostly silent, brooding people, the Karankawa Indians were as physically imposing as they were culturally enigmatic. Written accounts left by the white settlers describe them in stark terms; they were both hated and feared.

Though the Spanish, French, Dutch and Anglo-Americans are known to have been prone to exaggerate, numerous basic truths about the Karankawas were undoubtedly recorded by them. The dark-faced Indians spoke infrequently, even within their own tribal groups, and were often accompanied by tiny, barkless dogs (karan means dog, kawa: to love).

Reliably reported to have feasted on the flesh of defeated enemies, they were also said to prize basic civil virtues such as fidelity, the love of their children and loyalty to their brethren. In fact, the Karankawas so loved their kind that when someone in a family died, the survivors would mourn by openly wailing and weeping three times a day for up to a year. One of only a handful of studied cultures known to have practiced ritual weeping, they shed tears over many events, but the death of a loved one brought on the severest displays. Mourning tribe members would also refuse to gather food for a month or more.

They survived this ritualized, self-imposed ordeal only through the charity of other tribe members. Survived, that is, if there was enough to eat. The Karankawas knew hunger regularly, sometimes enduring on roasted rats and tarantulas. Some who starved did so willingly. Another part of the difficulty they had subsisting on the coastal prairies, marshes and barrier islands of Texas was also, in effect, self-imposed.

Rather than follow the logic of wintering in the forests along the rivers feeding the bay systems on whose shores they lived, then spending their summers out in the breezes where the ocean meets land, they usually did the opposite. It's hard to understand why they chose to live this way, but they apparently had no interest in letting others in on their motives. Although almost every other tribe living in Texas at that time adopted many of the cultural elements and practices of the whites as their own, the Karankawas staunchly refused to take on any of their ways and means.

Towering above almost all other Native Americans and Europeans, the males of the tribe reached a full six feet. Their skin was lighter than that of other Indians, the tangled hair hanging to their waist scorched cinnamon brown by the sun. Their dun, tattoed faces were framed by high, wide foreheads, due to the practice of strapping the young to boards and hanging them from the rafters for stretching. Warriors often threaded slender reeds through slits in the skin of their chests for decoration. Some wore a breechclout, while others simply went about naked as they dropped from the womb, even in cold weather.

The females, shorter and stockier than the men, were considered unattractive, dumpy and plain by those who described them. They often wore simple frocks of Spanish moss, though a few maidens wore more elaborate deerhide skirts. Given that rival warriors often kidnapped and married them, there probably weren't too many maidens around.

Nor were there many elderly members of the tribe to be found. Though they were known to be capable of surviving into old age, and were said to have straight, strong teeth well into their forties, tribe members who could no longer contribute to the good of the group were regularly killed. The manner in which this was done is not known. It seems certain that lots of weeping and wailing occurred in the aftermath of such events.

What is better understood is the basic way in which the tribe went about making its living. The men did the hunting and fishing and the women did all the rest, gathering food (they never adopted any forms of agriculture), caring for the young, building and cleaning the camp and cooking. When the men weren't hunting and fishing, they mostly sat around idly, occasionally taking a swim in the shallows or swatting at each other with sharkskin saps for sport.

It is fascinating indeed to take a mental journey back a few centuries and imagine what it was like to live as a Karankawa on the mosquito-infested shores long before the guns of the American Revolution or Civil War spilled blood on the soil of our homeland. The middle stretch of Galveston Island is where we set the scene.

In the month of October in some year in the 17th century, a group of thirty Karankawas arrive on the north shoreline of Galveston Bay, at a point of land now known by the name of their tribe. The men in the procession carry six slender, twenty-five foot canoes, dug out of tree trunks. They slide these into the calm, salty shallows which sit in the lee of the land, under a moderate northwest breeze.

The members of the tribe shove off and head for the barrier island, some two miles distant, keeping the wind on their backs and staying atop a bar which spans the bay, passing through a string of oyster reefs on the way. After entering a wide, grassy cove on the shore of the sandy island, they make their way to the marshy bank and disembark, then continue on to a group of trees where they will spend the winter.

Camped halfway between the bay and the beach, in a grove they call Three Trees, they plant themselves in the center of a wealth of available food sources. There are edible roots in the marshes along the bay, herds of deer, flocks of ducks and geese. The bayous weaving onto land from the estuary fairly teem with numerous sources of protein: trout, redfish, flounder, pompano, turtles and prolific oyster beds.

But over the stretch of bitter months, the sloughs become almost barren, sometimes draining entirely after strong frontal passages. The Indians use seines and traps to take a meager catch from the backwaters, but more impressive is a method some warriors use to take bigger fish from the slightly deeper waters of the bay.

As winter nears its end, in early March, a single hunter creeps along the shore of what is now Carancahua Cove, near the site of Galveston Island State Park. Accompanied only by a foxlike dog, he crouches while approaching the end of a narrow point projecting into the body of the cove, nearly crawling as he reaches the cool, clear water lapping at the shoal grass. In his right hand, the lean, tan man carries a six-foot bow made from a bough of red cedar. Strung with deer sinew, it's a powerful weapon, useless in the hands of a woman or child; only a grown man can pull it to the ready position.

A few yards from the water's edge, the Indian can clearly see dark shapes blanketing the muddy bottom; these grass beds, he knows, are favorite haunts for some of the fat trout that come near shore to warm themselves under clear skies at the end of the cold season. Beneath a bright sun, with stealth rivaling that of a blue heron, he remains hunched over at the waist and slips almost silently into the crystalline bay waters, shuffling slowly out to the edge of the soft mat of grass, watching for any sign of a fish as he goes. The little mutt sits down on the sand to watch and wait.

Then the man stops, slowly straightens himself and stands fully erect, holding a stout arrow tight against the bow's string; on the arrow's killing end rides a honed flint tip, and on its butt end, strategically placed snow goose feathers provide stability in flight. In silence, for long minutes that stretch out toward an hour, the patient fisherman maintains a vigil, while his loyal dog naps in the reeds.

Eventually he spies the object of his hunt; three spotted seatrout move off the far end of the grass bed beside which he is poised, slowly swimming down its edge toward where he waits. The old fish are completely oblivious to the presence of the man, who stands as still as stone. At high noon, he casts no shadow, as if he's become one with the mud, the sea, the sky and the sun. Inch by inch, almost imperceptibly, the taut arms of the warrior begin to rise and place the potent bow into shooting position. Eventually, he's poised for the shot, having pulled the weapon to its breaking point.

When the trout are but a few yards in front of him, he releases the arrow at the fattest of the three and hits it directly atop its wide, black head. The flint passes through the skull and digs deep into the muck, pinning the thrashing fish down. Like a raccoon, the hunter pounces on his prey and plucks it from the water still skewered on the shaft.

Retreating to the sand, he kneels and removes the iridescent trout from the arrow, which he washes in the water and places in its quiver. Then he heads off in the direction of the distant trees, carrying the dappled fish in one hand, the strong bow in the other, the faithful hound hopping at his heels. Later, he and other tribe members shed tears, then share in a feast, filling their bellies one last time before they row back across the bay to the mainland and the timbered river bottoms where they will spend the spring.

Bringing life to the legend of the Dog Lovers is rewarding to me. I marvel at the ironic combination of stoic resignation and emotional bravado with which the Karankawas lived. I'm mystified by the methods of fishermen who married the patience of the wary heron with the sharp, sure talons of the osprey. The harsh climate of coastal Texas demanded such things from them.

Though the modern inhabitants of this state have largely tamed the land, bridged the bays, dammed the mighty rivers and learned to ride the skies on metal wings, we can not fully comprehend the kind of simple, hard life the Native Americans lived. Our complex lives are much too comfortable to allow such insight.