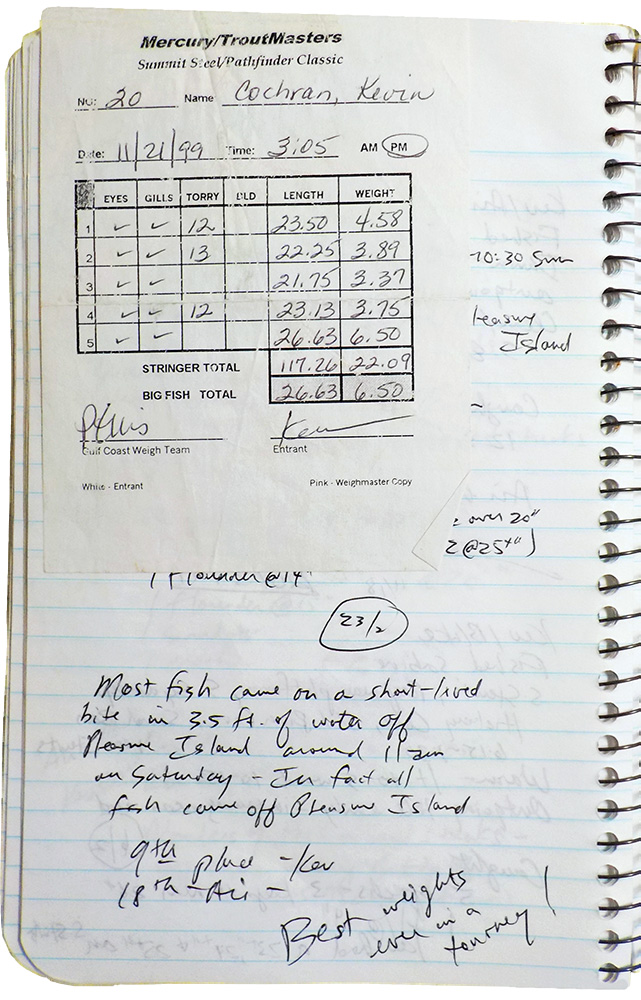 Over time, my experiences as a competitive angler helped me forge a life as a professional fishing guide. Nothing accelerates the learning curve like competition, at least for people who hate to lose. I remember details from some tournaments vividly and looking back on them helps me glean meaningful concepts, some of which I rely on to this day.

Heading into the Troutmasters Classic of 1999, my partner Ari Schwartz and I had good luck on several scouting trips spent on Sabine Lake. Details pulled from that year's fishing log prove it. On November 13 of that year, Ari, I and one other angler caught 34 trout, with 21 keepers, up to 28 inches. Nine of those measured at least 20 inches, with three stretching the tape to at least 25.

The next day, we fished with another angler, catching 12 trout to 25 inches, with six keepers, including a pair of bigger ones from the same spot where they bit the previous day. On the 18th, I and one other angler managed just five trout, but three of those measured between 23 and 26 inches. I caught all of those, again in the familiar location. Two significant details emerge from the study of the strategy elements recorded for those dates.

All the big trout (23-28 inches) came to hand while we waded near the south end of Stewt's Island, most biting topwaters in the morning hours. Best numbers of fish, almost all two and three pounders, bit soft plastics tossed from the boat into mud streaks close to subtle points and drains on the Louisiana Shoreline.

Predictably, given the format for the Classic, which allowed us to fish anywhere we wanted, Ari and I headed to Port Arthur on the morning of November 20th, each hoping to catch five jumbo trout in the next thirty hours or so. Not surprisingly, we started the event wading the south end of Stewt's Island. Unfortunately, we caught nothing in a couple hours of sustained effort, standing in the shallows where the big trout had bitten regularly on recent trips.

When we both ran out of enthusiasm for the spot, we climbed into the boat to discuss an alternative plan. In a fishing partnership, defining roles generally pays dividends. In those days, I served as captain of our team, since I had the freedom to do more scouting and we usually fished from my boat. I liked making decisions, but I knew better than to tune out my partner, who often generated our most productive plans.

After a short conversation, I idled the boat away from the island's shoreline into deeper water, then planed off and headed north and east, toward the tip of Rabbit Island. As we approached, we could see other anglers lined up, wading where we intended to fish. Without fully contemplating my actions, I maintained my course, steering the bow toward the coves at the edge of The Sportsman's Paradise.

Temptation, the wispy waif, whispered to me, “Take the easy fish schooling on the shoreline to the east.” My steadfast partner could not hear the witch.

He rightly complained,  “If we go over there, we'll catch three pounders at best. And that ain't gonna cut it in this event. We need to go back closer to where we caught those big ones the last few times and grind it out.” Though I almost succumbed to the weak urge to play it safe and get my five trout by working the mud-streaks, I knew my buddy had it right. Those fish would not win us the trophy.

So I executed a wide turn and headed back to Texas. Eventually, I anchored the boat on a shallow sand flat extending north from Pleasure Island, and we jumped back out to wade.  Both of us felt throwing topwaters in the warm, calm conditions would offer the best chance of hooking and catching five trout measuring at least 25 inches, our dream outcome for the event.

Ari shuffled north while I made my way slowly south, both of us walking the dog with large floating plugs. About thirty minutes into the wade, fish began blowing up in the sediments stirred by my passing. Looking down, I could see the water just starting to move. A check of the tide chart for that day reveals low tide occurred not long after 7:00 AM. High tide would happen around 2 PM. At about 11 a.m., I could feel a rising tide roll in. Then, the first fish blasted off on my lure.

A long, thick trout leapt completely free of the water trying to take my Super Spook, but the hooks failed to connect us for a fight. I shouted an obscenity, and like a rookie, stopped fishing, bowing my head in disgust and losing focus. While I stood still, feeling sorry for myself, I heard a sucking noise when the same or another trout opened its wide mouth and snatched my plug from the surface. Ari made a bee-line toward me while I subdued and strung the predator, which wound up measuring over 26 and a half inches and weighing six and a half pounds.

In a short-lived, vigorous flurry, we managed to entice numerous loud blowups close to where the first fish bit, and I caught five qualifying fish in the next hour, while Ari strung four. Though I missed several other noisy attackers and lost a ridiculously fat one close in front of us, I knew I had a chance to win the top prize.

When the bite ended, we walked over to where most of the fish had tackled our lures and realized we'd stumbled onto a patch-reef lying at the edge of the sand flat. Later, we'd learn other accomplished anglers already knew about the structure and fished it regularly. I still wonder why no one had claimed it earlier that morning. Despite dealing with pea-soup fog, we fished the spot hard for most of the remaining hours of the event but couldn't ignite a second salvo from the school of mature fish.

If I could go back and do things over again, I'd change one choice significantly. I'd switch lures more quickly after the bite on topwaters subsided, and repeatedly throw slow-sinking twitch baits and soft plastics at the reef, in attempt to scratch out a few more bites from those big fish. These days, my awareness of the effectiveness of such a strategy feels almost like instinct, thought it did not back then.

I did replace my smallest trout with a slightly bigger one, working the shallows closer to the revetment rocks, and weighed a five-fish stringer of 22.09 pounds, good enough for 9th place in the event. Ari stayed stuck on four fish, but still finished in a respectable 18th place, out of at least 200 contestants. Despite my higher finish, I give my old sidekick much of the credit for what we did.

Luck played a significant role in our success, but good fortune often arises as a residue of adequate preparation. Without Ari's insistence on sticking to the strategy of wading and staying close to where we'd caught a number of quality trout leading into the event, I'd likely have weighed a smaller sack that weekend. None of the fish we caught qualified as a trophy trout, but the importance of the truths revealed by our story increases proportionately with the size of fish targeted.

A thorough analysis of these events leads me to several poignant conclusions. At a basic level, the most important concept I find relevant to the story of our performance relates to the need for grace under pressure. I daresay panic has no redeeming value in any scenario or context. In competition, panicking leads to flawed decisions, while calm commitment to a plan frees the mind for a focused effort.

When we left the dock on Saturday morning, we should have done so with backup plans already in place, ones which involved wading areas near the spot which had produced best for us on the days leading up to the event. Because we attempted to achieve something difficult, we should have anticipated things not working out easily, fully expecting to subtly tweak our plan.

This brings up a second meaningful concept—clearly understanding one's goal or goals for an outing allows for designing and executing commensurate plans. If we'd intended simply to “get our qualifying fish” – in this case five measuring at least 20 inches – on the day in question, we'd have started with a different plan, likely one focused on fishing the mud streaks. But, because we knew we needed and wanted to catch big fish, we had to adjust our strategy accordingly. Catching a few big trout generally proves more difficult than catching higher numbers of smaller ones, elevating the importance of commitment to the task.

Ari and I would have had an easier time committing to our plan if we'd known more about the variables impacting our performance that day. We had limited experience on Sabine Lake, and worked off cryptic paper maps in our quest to learn as much as we could about the bay.  Today, we could use Google Earth and other resources to learn details about bottom topography and other, related issues.

Knowing the precise locations of all the reefs and areas with scattered shell lying in close proximity to the tip of Stewt's Island would have given us a better chance of generating legitimate back-up plans. This relates to an all-important concept—the person with the most complete knowledge of the bottom topography of the bay has the greatest chance at success.  In addition to awareness of structural features, complete knowledge of an estuary includes the way environmental elements like temperature, wind speed and direction, salinity level and tidal movements affect the fishing throughout the body of water.

In those days, we certainly grasped the importance tidal movement plays in a place like Sabine Lake. Fish living in locations where water moves on a regular basis tend to snap their jaws voraciously during certain parts of the cycle and become tight-lipped during others. Most likely, we struck out early at Stewt's because we fished it at the end of the outgoing tide and during the slack lull before the tide turned and gushed back in.

Luckily for us, we found ourselves in one of the most productive spots on the lake when the incoming flow ignited the bite. Given the tide chart for the day, we should have expected a tough bite early, and should certainly have been fishing with maximum focus later in the morning, when the tide cycle became more favorable to catching. The smartest anglers use all available resources and attempt to maximize the effects of stimulators like turning tides, weather changes and a rising or setting sun or moon.

Almost all angling skill is learned behavior, not instinct. Some of us have more inherent talent or aptitude for fishing than others, but none of us entered this world equipped with the skills of a polished angler. We acquire skills when we generate ideas, test plans, analyze results, then repeat the processes.

In some ways, fishing for big trout resembles aspects of other sports. In baseball, sluggers strike out more than singles hitters. In golf, long-drive champions find the fairway less often than tour players.  In basketball, three-point bombers miss their mark more often than post players. In the trophy trout game, anglers seeking to savor a whiff of the rosy wreath handed out at the victory parade sometimes feel the spray of the skunk.