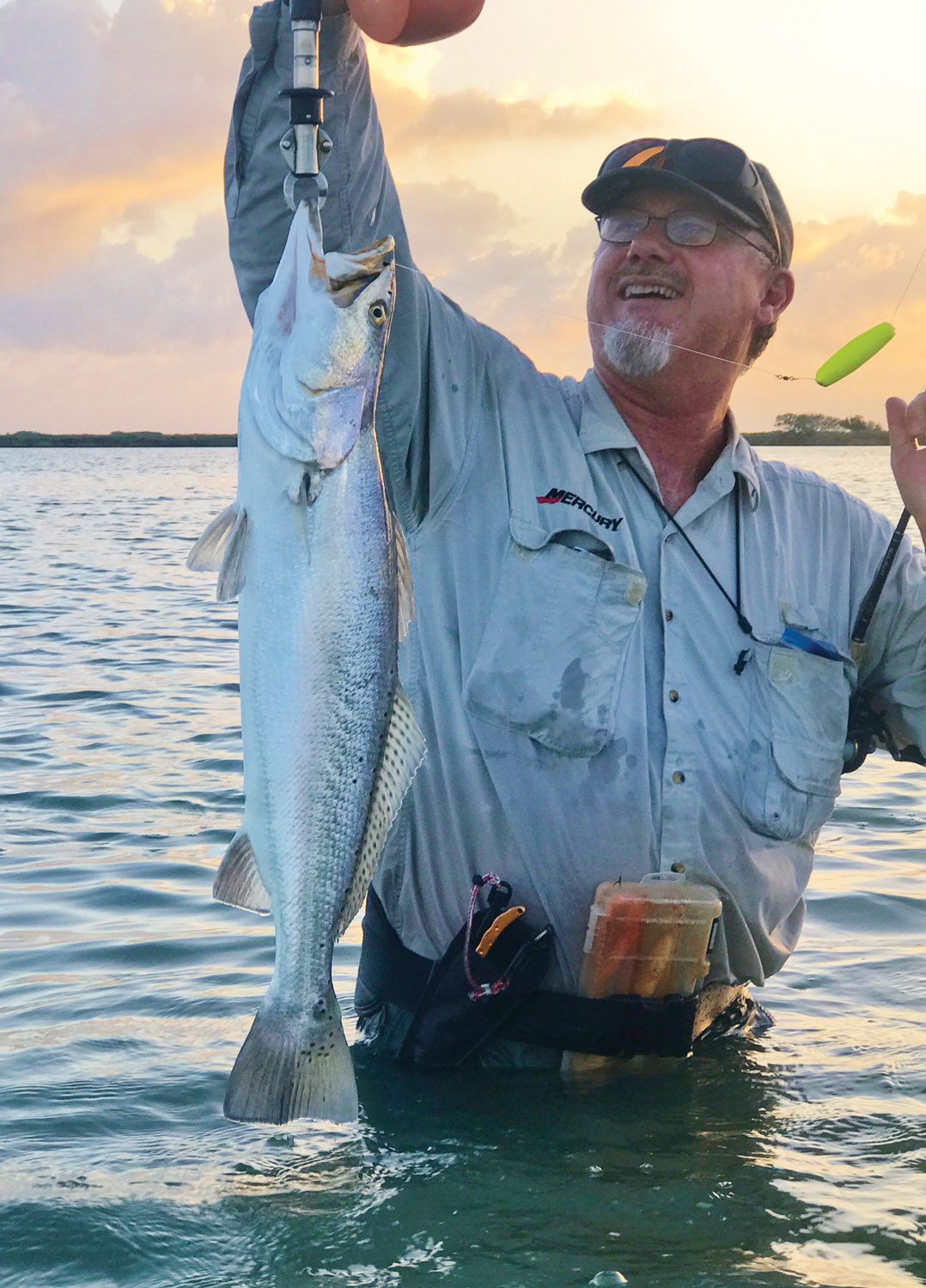 Lure fishing for dummies - or - unraveling the intricacies of the cork and jig?

Years ago, I realized the potential efficacy of dangling a soft plastic under a float. On some occasions, the method proves far more productive than other strategies. In the past, I've generally touted the cork and jig as a last-ditch attempt to scratch out a few trout in sloppy conditions. But on several outings this year, I realized the tactic can dramatically improve the catching when a slow bite occurs in benign conditions.

Certainly, the attributes inherent to the method make it attractive when windy conditions create high turbidity and reduce water clarity. The cork generates noise and displaces water, helping fish find the lure when they can't see it. This basic truth accounts for why I've long thought of the plan as a way to cope with ugly weather and water.

When fish rely on their lateral lines and other sensory devices more than their eyesight to locate prey, sending them vibes in the form of splashes makes perfect sense as a coping mechanism. Reduced sight-ability likely affects fish much the same way it affects us, by elevating their other senses. Fish probably pay more attention to noise and vibration when they lose the ability to locate things easily with their eyes.

While in the process of homing in on the commotion caused by the float, fish come close enough to find the soft plastic hanging beneath it. Anglers who allow fish plenty of time to do so benefit handsomely from their patience. Trout often strike a soft plastic hanging under a cork after the angler allows it to sit still for several seconds. In most cases, especially when strong winds create visible waves on the surface, the bobbing action of the cork generates subtle movements of the soft plastic, without the angler imparting any action.

This method provides other benefits, in addition to allowing the fish ample opportunity to locate and strike the soft plastic. The incorporation of a float also allows for working worms over shallow structure and cover elements without becoming snagged. When manipulated with sharp twitches of the rodtip, the worm snaps up and down enticingly, sometimes hopping out of the water behind the float. No other method creates such spastic movements as the cork and jig.

Certainly, specific aspects of the movement pattern of a lure can profoundly affect the productivity of a presentation. I've observed the truth of this statement many times in my career. Much of the time, when I or some member of the group identifies an effective method with a specific lure, all of us attempt to mimic the action using the same plug. In some cases, a reasonable approximation of the presentation with a similar offering proves sufficient to urge a relatively similar number of strikes.

At other times, minutely detailed aspects of the movement pattern of the lure play an astoundingly dynamic role in productivity. Until this year, I did not apply this truth to the cork and jig method, probably because, at a superficial level, the strategy appears so simplistic. I figured the basic attributes of the method would render it more productive in a given situation, also that any angler deploying the method would experience similar results, regardless of their skill level or ability to fine-tune presentations.

For the most part, I placed the strategy in the “lure fishing for dummies” category. I did not perceive meaningful ways to tweak the presentations, and tended to become easily bored using it, due to its monotonously repetitive nature. Additionally, the need to keep an eye on the float at all times becomes tedious to me. These facts partly account for why I don't use the method unless I experience difficulty catching fish with other types of methods and lures.

I'd describe my basic fishing style as animated and energetic in nature. I favor presentations incorporating lots of rhythmic twitching, which allow me to impart erratic action into the movement pattern of the plug deployed. These methods don't really translate well to the cork and jig.For the most part, the angler simply twitches the rodtip hard enough against a tight line to make the cork create a splash, then pauses, and repeats. This can quickly send an artistically-minded angler spiraling into auto-pilot mode.

The negative mindset related to the cork and jig changed somewhat for me this year, partly because I remembered something a well-known angler taught me back in 1993, the first time I saw someone skillfully deploy the technique. On the memorable day, Doug Bird took me fishing in Baffin Bay for the first time. I listened as he described various ways to tweak the subtleties of the presentation, including adjustments to the vigor and cadence of the twitching, and the length of the pauses between twitches.

I can't explain why I temporarily forgot the lessons I learned from him, but I have found renewed confidence in their veracity. On numerous occasions this year, when the catching on more favored lures did not measure up to my expectations, given reasonably calm winds, pretty water, moderate temperatures and other benign aspects of the situation, I discovered I could catch trout quite easily by suspending my soft plastic under a cork.Perhaps more importantly, I realized the specifics of presentations can and will affect productivity with this method.

One outing etched the truth into my psyche more than the others. While fishing a shallow, rock-studded sand bar in Baffin on a calm summer morning, I and the other members of the group worked through the usual lures without any success, after we managed to catch several solid trout on topwaters right at daybreak. I could see signs of feeding fish all around us, including frantically fleeing mullet, hopping shrimp and popping slicks. In the clear water and friendly conditions, I expected to switch off the topwaters to sinking twitch baits or soft plastics on light jigheads and continue catching at a steady rate, as I had on several trips prior to this one.

When the other lures produced no bites, I pulled the pins from each end of the Comal Tackle Company cork I had placed in my pocket and attached it to the line about eighteen inches above my worm. This ease of use explains why I favor a cork made by this company; carrying a float of this kind at all times encourages testing the method's efficacy on a regular basis. On the first cast, after no more than three or four twitches of the rodtip, a trout aggressively attacked my MirrOlure Provoker and yanked the chartreuse float under. In the next five casts, I caught three more fish.

Narrating the events to my clients, I walked around handing out corks to each of them, and we all began using the method. Two of my customers mastered the technique quickly and began catching fish. Because we cast into water about knee-deep, with scattered rocks protruding off a sandy bottom, we used sixteenth-ounce heads. When one of the customers failed to catch a fish for a while, I realized he had an eighth-ounce head tied onto his line, and switched him over to the lighter one, figuring this would solve his problem.

He continued to fish without getting bites, so I began to carefully observe his method, all the while offering advice on its specifics. Eventually, we concluded the movement pattern of the lure created by the intensity and cadence of the twitching, coupled with the exact duration of the pauses between twitches, accounted for the difference in my results and his. Over time, he became better able to adequately mimic the productive sequence and began catching fish at a quicker rate.

These events proved poignant to me, emphasizing the importance of both the physical aspects of the setup of the rig and the specifics of the presentation deployed with it. I now believe sixteenth-ounce jigheads generally produce better than heavier ones, when deployed under a cork. The twitching of the rodtip snatches the lighter payload around more erratically behind the float, and the worms flutter down more enticingly on the pauses. They also wobble around in a livelier manner while the cork dances on the waves.

In addition to elevating the status of the light jighead for use behind a cork, I also realized the vital need to pay close attention to all aspects of the presentation when deploying the method, making adjustments to the timing and intensity of the twitches and the duration of the pauses.As with all presentations, experimenting in a precise, controlled, consciously-planned manner makes sense, allowing one to identify which elements enhance productivity.

Certainly, it's possible to tweak the effectiveness of the cork and jig through adjustments to the physical elements of the equipment, by changing jighead size, type and color of the worm, length of the line between float and worm and the type and size of the float. I don't deny the potential impact of these things. But those adjustments sometimes carry less significance than focusing on an issue which profoundly affects the productivity of any method—the subtleties of the movement pattern of the lure.

Moving forward, I will continue to carry Comal Tackle Company corks in my pocket, so I can experiment with them regularly. I'll also pay careful attention to the precise manner in which I manipulate the rig and presentations made with it. Most likely, this will facilitate better focus and creativity with the method, so I can use it more productively.