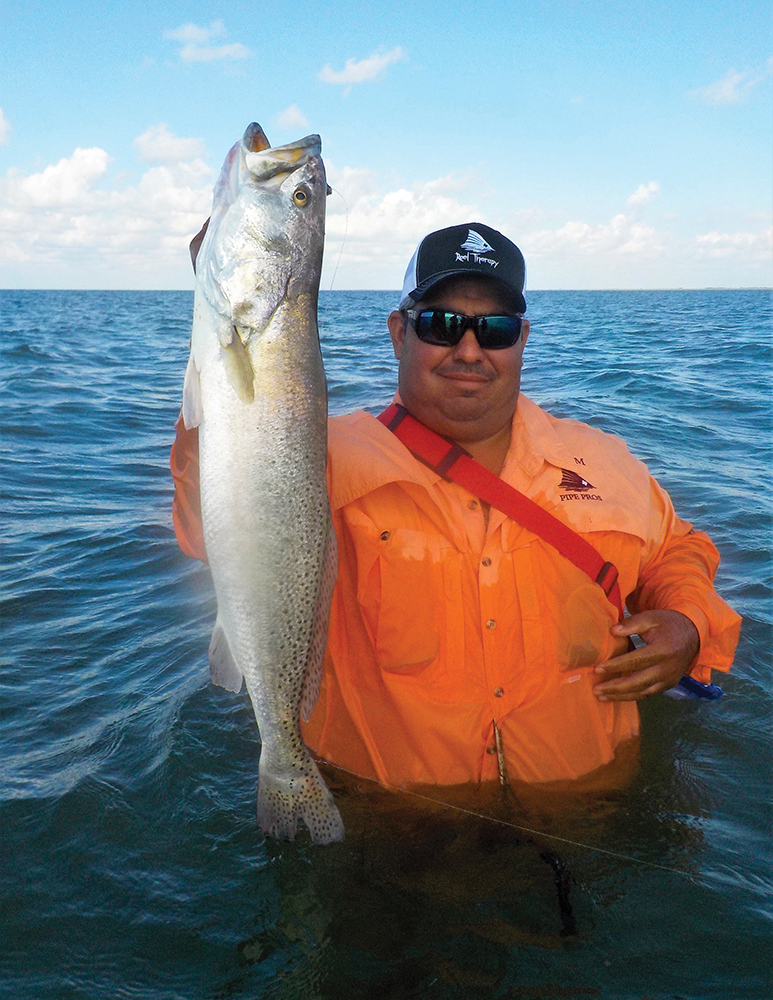 Adrian Valdez with the longest trout caught by any of the captain's customers in 2018.

Some trophy trout enthusiasts experience mixed emotions associated with the arrival and departure of May. Ushering in the yearly heat wave, this month serves up the beginning of the end of “trophy trout season” for lure-chunkers; it also provides shots at some of the biggest specimens in the bays. During these weeks, chances of catching trout meeting or exceeding the eight pound mark lag a bit behind the best months, but when conditions conspire to enhance opportunities, tussling with memorable monsters remains a distinct possibility.

The first remarkable May memory rushing to the front of the line in my mind occurred in 2002.  Still a secondary teacher back then, I fished Troutmasters tournaments on a regular basis. In the days leading up to the poignant event, organizers changed the venue from Baffin/ULM to an open one; contestants would have the option of fishing wherever they wanted, provided they could deliver five trout to the scales in Baytown by late Sunday afternoon.

This unexpected alteration offended me, and I chose not to mail my entry fee, after having participated in about forty consecutive events. In retrospect, instead of acting as though I'd tossed my coins into the till, I should've stayed home with my wife, lit the barbecue pit, watched sports on television, but though hindsight's 20/20, foresight's not.

Officials set the fishing start-time for the event at midnight on Friday, to allow contestants ample hours on the water, acknowledging the long drives many would make to Baytown from far-flung destinations on Sunday. I did arrive at the boat ramp at Bird Island Basin in the middle of Friday night, but an intense thunderstorm prevented me from launching my boat for about three hours. After a fitful nap in the truck, I shoved off the dock in calm conditions under a thick blanket of faintly flickering clouds.

Leaving the boat anchored on the spine of the Tide Gauge Bar, not far west of Cathead, I waded into a pleasantly rowdy topwater bite. By the time the sun colored the black canopy  steel-gray, I'd caught and released several four-pound trout. But that's not really the story.  This bittersweet tale emerges from two flawed decisions, the aforementioned one to fish, another involving my misunderstanding of a report which motivated my strategy.

A friend of a friend had relayed details about his recent catch of several big trout, up to 30 inches, saying, “I caught 'em wading along the Tide Gauge, throwing south, as far out as I could.”  So, when the bite slowed on the spine of the bar after daybreak, I walked out as deep as I could and began shuffling westward, casting a black and silver Skitter Walk into the depths lying to the south. Later, I would learn our friend had stayed on the shallowest part of the bar, casting to the edge, so my attempt to mimic him failed. Luckily for me, the strategy I employed resulted in precisely one strike.

I saw no sign of a splash when the big fish bit. She yanked the plug under with stealth and purpose and dove deep for the fight. After several minutes, I succeeded in coaxing my opponent into the clear water covering shallower portions of the bar, where I could size her up. At first, I didn't trust my judgment; the dimensions of the fish seemed outrageous. I found myself close to the boat when I managed to land her.

The tape on the front deck of my Triton verified the 31 inches spanning her closed lips and the tip of her tail.  Estimating her length had been difficult during the fight because she was fatter than a Butterball turkey! I carried no Boga Grip back then, but having weighed my share of bruisers since, I confidently assert she was most likely my first 10, in addition to claiming status as my first 31. To this day, I have difficulty accurately describing the swirl of emotions I felt when she flicked her tail at my feet and bolted back into Baffin's shadows like a southbound train.

My hands did tremble upon the moment of release, but I felt no elation commensurate with the attainment of such a treasured dream. Ironically, I felt hollow, empty. I knew I'd botched the opportunity of a lifetime by not entering that weekend's tournament. I tried to convince myself I wouldn't have made the same cast at that precise moment if I had entered, but the argument felt forced.

I tossed and turned on the porch of a friend's floater Saturday night, while a brisk northerly breeze rocked both the cabin and me. I couldn't escape the nagging way my achievement also felt like an epic failure. The next morning, my remorse and regrets took another dive into the deep end.

Half-awake, I idled a short distance from the row of floaters and began casting my scarred Skitter Walk in the shallows around a rock studding a depth contour in the Badlands.

I made twenty or more attempts to urge a strike from a fish hunting beside the boulder but had no luck, so I tossed the floating plug right on top of the rock.  The plop-down splash morphed into a massive blow-up, and I quickly landed the trout I had tricked. After measuring the fish at 29 inches, I released her, then jumped in the boat and made a bee-line for Bird Island, shaking my head and mumbling the whole way in, realizing I had added insult to the previous day's injury. The two trout I could not weigh in Baytown would have totaled nearly 18 pounds! I've never experienced such a confusing combination of elation and depression related to any other sporting accomplishment.

Years later, on another day in May, I desperately repeated the strategy of wading the deepest southern edge of the Tide Gauge Bar, mostly because everything else I had tried failed to earn a single strike. The young men fishing with me had given up on taming a giant; they just wanted a few keepers to take home to eat. I finally started getting bites by throwing soft plastics into the deep water fronting the famous bar, allowing them to flutter through the depths, then short-hopping them off the bottom. The guys fishing with me followed my lead.

As we began filling my customers' stringers with eating-sized specks, I waded away from the group to the west, leaving them near the exact spot where I'd caught my first 31. Half-believing my own words, I warned them, “You could hook the biggest trout in Baffin doing this, so fish like you mean it.”

Predictably, when I'd moved just far enough away to prevent me from adequately helping them, I heard a familiar whooshing sound.  When I turned to look, I could see a beachball-sized sphere of foam spraying skyward and inching toward them. The three gathered together while I marched their way; from their clamoring and excited yelps, I could tell one had succeeded in pulling the giant onto the bar, into their midst. The man's rod pointed sharply down, right at big momma's head.

“Go easy on her.  She ain't ready yet!” I yelled. For reasons I will not relate here, the line snapped, and the tip of the rod whipped instantly upward, as if to punctuate the sickening event. All three of my clients later agreed they'd never seen such a tremendous trout.

“It didn't even seem real,” one lamented.

The angler who hooked the fish tried to find the silver lining in our gunmetal-gray cloud. He said, “At least I know she's out there. That the hype surrounding Baffin is more than a myth.”  Coming as it did toward the end of a slow day, one on which we'd basically given up on encountering such a specimen, the loss weighed heavily on us.

In contrast, I felt elated when I caught my longest trout ever, near the end of the most productive run of trophy fishing in my career, on May 5, 2010. I hooked the specimen on a pink/chartreuse Fat Boy, in the narrow end of a bright pothole making its mark on the dark bottom of a mostly grassy flat in the North Badlands.

The behemoth fought right at the surface, giving me several clear looks early in the duel; both halves of her seemed long! I began waving at my partner while we fought, having just stowed my camcorder in his boat after carrying it in my pocket all morning. While he idled up under a mid-day sun, I pinched the trout's wide lip with my Boga Grip. Placing her briefly onto the deck of his Tran Sport, we verified her length as 32-1/4 inches. The device showed she weighed a shade under ten pounds.

“Don't you feel disappointed?” my friend asked, “ I mean that you caught this fish in May. If it was earlier in the year, she'd probably weigh well over ten.”

I looked long and hard at the shapely female finning in the shallows beside me, her body adorned with what seemed a million dots. I didn't really feel disappointment then, but in retrospect, he made a good point. Fortunately, I captured useful video clips while releasing the glorious creature, some of which appeared in my second commercial DVD.

I shot no video of another memorable May excursion, this one a three-day charter made with a customer from Virginia. On those days, we used sinking Fat Boys to sight-cast and catch numbers of 25 to 28-inch trout seen lurking in potholes next to rocks on the north shoreline of Baffin. Some of the biggest swam within a rod's length of our feet. We attempted to “perch jerk” those, dangling worms right in front of their noses, but failed to entice them to bite.  We did manage to trick some others with floating Fat Boys flicked atop shallow sand bars in Alazan and used a Provoker to pull one sow approaching 30 inches out of a school of dinks swarming on a famous flat near Cathead.

More recently, one of my oldest, dearest customers caught our longest trout of 2018, dropping a soft plastic repeatedly near the wind-blown, chest-deep face of a rock in the Badlands.  When the 31-incher burst free of the water after tasting the hook, we all agreed her head looked as big around as a football.  After measuring and documenting the fish, I still say I've never seen a bigger head on a trout. Of course, the monster bit because she felt pangs of hunger; with nothing in her stomach, she weighed a shade under nine pounds. As with other May memories, one hard fact diminished the otherwise pure magic of the moment.

I did tangle with two other worthy trout after casting at the same rock over the next few days, confirming the productivity of such a pattern in the second half of spring. Late-season cold fronts set up higher than normal potential for catching sow trout in South Texas this month.  For a couple days after north winds subside, light breezes often whisper over clear waters, creating scenarios which allow anglers to see potholes in the grass, rocks lying adjacent to cozy holes, and sometimes, the dark, dappled forms of the stars who haunt our angling dreams.