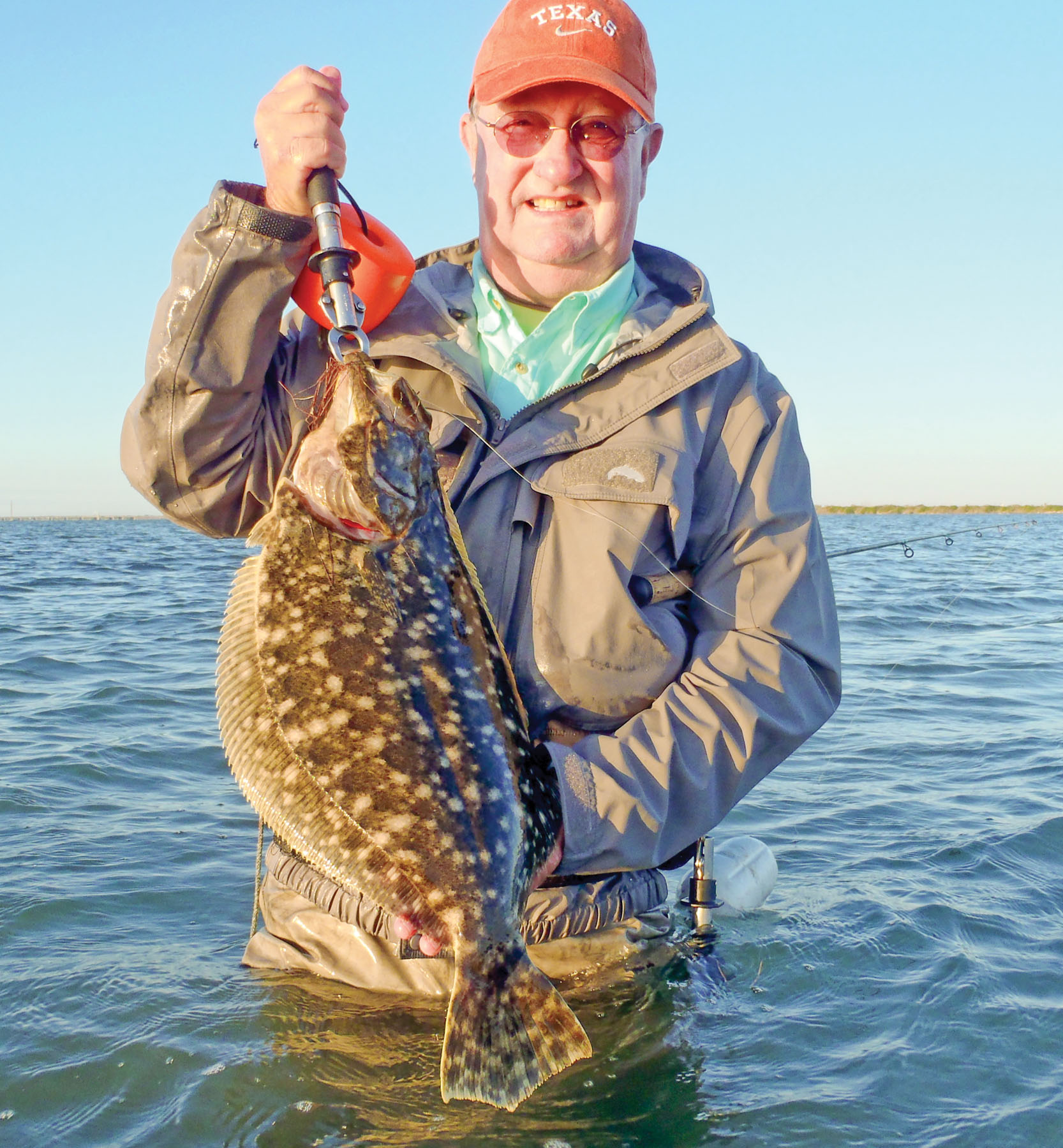 Sometimes, large flounder intercept lures intended for trophy trout, especially in the weeks immediately prior to the onset of winter.

Fundamentally, fishing for speckled trout in winter is much the same as in the other three seasons. Success is achieved through effective implementation of all aspects of the effort: fish location, strategy, lure choice and presentation. Anglers who acknowledge how winter weather affects the movement patterns, habits and feeding mood of the trout have the best chance to catch them consistently.

Passing fronts cause dramatic weather changes during winter. Strong, gusty north winds, plummeting air and water temperatures, and ballooning barometric pressure levels play a role in the selection of place, strategy, lure and presentation. On days in the immediate wake of strong fronts, staying off the water can be the only reasonable choice, but when harsh conditions first begin to moderate, the catching can be memorable.

Speckled trout inhabiting inland bays use deep, open basins and dredged channels as safe havens when cold weather settles in. Rapidly plunging water temperatures which bottom out in the high forties or low fifties cause many of the trout in an area to seek the relative comfort and safety of deep water. Apparently, they sit somewhat idle on the bottom in these basins and ditches while the weather is deteriorating.

Catching them in these places must be done from a boat, since the depths do not allow for wading. Locating mud streaks in the water and/or verifying the presence of some bait fish are two key elements which aid in locating fish in the swag. When drifting open areas or jigging channels in search of bottom-hugging trout during cold snaps, soft plastics are by far the best lures to deploy.

The soft plastics need to be presented low and slow to the lethargic, relatively inactive fish. Adjusting jighead size to match the conditions is a critical component of success in this endeavor. Heavier heads become necessary when winds are blowing in excess of fifteen knots, while lighter ones work better when wind speeds are slower.

Most productive basins lie adjacent to shorelines which are protected from the effects of brisk, offshore winds. While any channel can be productive during post-frontal conditions, stretches which lead to dead-ends are often best, since currents are reduced in such places. Cold-stunned fish generally don't prefer areas which force them to fight against the effects of strong currents.

Some time after a front passes, winds will moderate, and temperatures will begin to rise. When this happens, large trout often respond by leaving the basins and heading toward nearby, shallower flats. The most productive flats lie in the lee of the land along north and west shorelines.

Areas with ample, shallow acreage and various types of bottom offer the greatest potential. On the Upper Coast, the bottom is usually a mix of mud and shell. On the lower coast, the list includes sand, mud, grass and rocks. Spots with plenty of dark, soft bottom covered by one to three feet of water are prime, especially if they lie close to points where trout move out of the basins (and/or channels) into the shallows.

Big trout found warming up, or sunning, in shallow water are sometimes almost impossible to catch. On occasion, they seem content to soak up the warmth, and are not in the mood for a meal. Eventually, they will feel the pangs of hunger and become much easier to entice into taking a bite. The presence of active bait fish in an area often indicates a turn in the mood of the trout. Many times, the need to feed arises in all the fish simultaneously, and a dead bite quickly morphs into a feeding frenzy. Maximizing production in such a scenario means adjusting lure choice and presentation to optimally match the moment.

Soft plastics on light jigheads (sixteenth-ounce) can and will work to catch large trout in the shallows. Floating and sinking versions of Paul Brown's Original Lures are perhaps more effective for targeting trout which are actively searching for prey, particularly when deployed in a thoughtful and artful manner. These twitch baits should be worked slowly and rhythmically in the chilled waters. Persistence and patience are often required to coax strikes from scattered big trout on shallow shelves and flats, until stimulators come into play.

A variety of environmental and celestial events can stimulate an improvement in the aggressiveness of the feeding mood of trout. Paying attention to the timing of these events and planning trips around them is one way to improve consistency when fishing in winter. Among the acknowledged stimulators are the rising and setting of the moon, the start and end of a tide cycle, and the return of onshore winds after a dead-calm lull. If and when one or more of these stimulators occur, anglers should anticipate an upturn in the feeding mood of the trout and alter lure choice and presentation accordingly. Slightly faster, more erratic presentations with twitch baits and topwaters can become effective when the trout are actively chewing.

Two of the most obvious (and frequently overlooked) stimulators are the rising and setting of the sun. The hours immediately prior to dawn and following dusk are often the most productive windows of opportunity in Jack Frost's months. Most people would rather fish during the relative warmth of the afternoon and through the gloaming, rather than rise early and embark on bone-chilling boat rides in the dark. Fishing from late-afternoon into the night is a great way to enhance the potential for catching trout in cold weather.

Some bays and/or areas where the water is extremely clear can seem void of life altogether during the daytime, but plenty of hungry fish appear in predictable places soon after the light in the west fades. Shoreline flats, reef edges, rock piles and humps close to deep basins and channels can become crowded with snapping sow trout during the transition from day to night. At such times, Corkys, Catch 2000s and other twitch baits entice some of the most violent strikes of the year from trout which possess a fleeting, seemingly insane urge to feed.

When a tide change, moon rise or set, or upturn in the weather coincides with the setting of the sun at the end of a lull in the action brought on by a passing front, the potential for catching numbers of trophy trout is perhaps at its peak. In some cases, topwater plugs will draw explosive blow ups from the ravenous trout.

Generally, conventional floating plugs work best when water temperatures are at least in the low sixties, though they occasionally produce when the water is a little colder, in the mid to upper-fifties. If water temperatures rise from the mid-forties into the upper-fifties, trout are much more likely to be active enough to strike topwaters than they would if water temperatures have recently nose-dived from the upper-sixties into the mid-fifties. In essence, topwaters are more of a specialty lure in winter than in warmer weather, but when the variables are aligned right in the cold season, unforgettable catches can be made with large, floating plugs.

Big, bulky lures seem better suited to winter fishing than small, slender ones. For one thing, trout have fewer options on the menu when it's cold. Mostly, they dine on large mullet and other trout. Consequently, larger plugs effectively mimic what the trout are eating on a regular basis. Additionally, large plugs are better suited to slower presentations, which work well with topwaters (as with all lures) when water temperatures are low.

During the period of time starting with the return of onshore winds in advance of the next front and leading right up to the arrival of the front, topwaters have their highest potential in the winter months. In fact, when strong north winds first begin to whistle, announcing the arrival of a new blast of cold air, large trout often feed voraciously for a couple of hours, and catching them on topwaters can be easy.

In order to best take advantage of such a situation, smart anglers set up in an area which is well-protected from the harsh effects of a strong front, and which offers a safe route back to the harbor once the fishing trip ends. As with all aspects of winter fishing, respecting the inherent dangers of severe and unpredictable weather plays a part. Wearing the proper amount of the right kinds of clothing, thinking ahead and making plans to cope with deteriorating weather and rough water, and maintaining a constant vigil on the horizon are wise.

The severest winter weather will cause trout to become basically dormant for a time. These temporary lulls, or shut-downs, in the feeding activity of the fish spur short-lived bursts of activity when they end. Winter weather winds its way around a circle of change. At the top of the circle is a frontal passage, accompanied by a frantic frenzy of feeding activity. Soon after strong winds settle in, a lull in the action inevitably occurs. Eventually, toward the bottom of the circle, the weather reaches a low point and begins an upward turn.

Often, the return of onshore winds accompanies rising tide levels and temperatures on the upswing side of the circle. Sometimes, the rise lasts for a couple of days or more, before the arrival of the next front starts the cycle over again. Adjusting location, strategy, lure choice and presentation in accordance with this cycle aids in the quest for consistency in winter trout fishing.

Astute anglers stay close to (or in) wintering basins, along shorelines protected from the effects of north winds. They watch for signs of bait fish present in areas where trout are likely to be moving in and out of deep, protected pockets of water. They also recognize the need to make adjustments to lure choice based on the specifics of the weather of the moment, and to utilize slow presentations most of the time. In the end, winter fishing remains similar to fishing in the other seasons; the best-prepared, most knowledgeable, versatile and vigilant anglers outperform the rest.