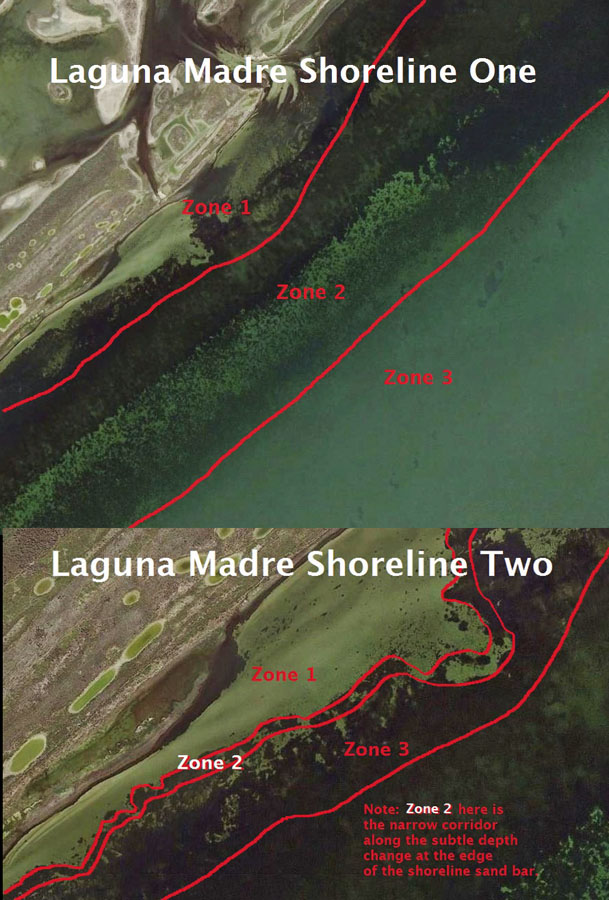 In order to consistently catch fish, one must locate places holding enough fish to justify the effort to catch them. In essence, we strive to keep as many "dots" as possible on our available "screen," meaning we try to stay within reach of as many fish as possible at all times. Some situations make doing so easier than others.

Three dimensions combine to form the prism we probe. Even shallow water includes both horizontal and vertical components. Deeper water makes locating and catching fish more difficult, since fish can suspend some depth off the bottom, adding further confusion to the equation, while shallow water generally makes things easier, because of the reduced scale of the third dimension.

I've developed a strategy for attempting to keep myself within reach of the trout I seek, one which involves thinking in "thirds." The first step in this plan requires making a basic decision about which part of the area most likely holds the greatest concentration of fish. I start by thinking of the general layout of the part of the bay I've chosen, breaking it down into three parts when possible.

The photograph labeled Laguna Madre Shoreline One (LMS1)provides an example. It shows a stretch of water along the western side of the Upper Laguna Madre. I've described and marked three zones, using depth as the primary defining attribute for each. The shallowest, Zone One, includes the part of the area closest to the shoreline. Zone Two includes the mid-range depths lying between the shoreline shallows and the edge of the deepest water, where the outer grass beds extend toward bare bottom. Of course, Zone Three, which I (and others) refer to as "the swag," contains deep water of relatively uniform depth and a bottom generally devoid of cover elements.

With regard to my strategy, the first decision involves deciding which zone will likely hold the greatest concentration of fish at the given time. In order to make such a judgment, I factor in various details, including the season, time of day, tide level and water temperature. On occasions when I conclude most of the fish prefer the swag, fishing from the boat becomes the only way to target them.

In such a circumstance, I don't really break the zone into smaller parts horizontally to make my search for fish. In a worst-case scenario, fish in Zone Three lie scattered about randomly, suspended some distance from the bottom. In that case, locating and catching any of them might prove ridiculously difficult. When fish move deep and suspend at some depth between the bottom and the surface of the bay, catching them can become nearly impossible.

Dividing the water into three vertical zones can then become helpful in the search. I do so by making a basic prediction of the depth I believe the fish most likely prefer, breaking it down into the bottom, the mid-range depths and the depths closest to the surface.

When trying to make fish bite in such a scenario, depth of presentation becomes a critical component in the process. Where lots of surface activity indicates fish feeding near the surface, topwater lures and others worked close under the surface make sense. Fast-sinking twitch baits like 51 and 52 series MirrOlures and floating/diving crank baits effectively target fish in the mid-range depths. For the most part, soft plastics work best to locate fish in the swag, though. Experimenting with speed of retrieve with all lures and the weight of the jigheads used on soft plastics can enhance the ability to locate suspended fish. Keeping the lure in contact with the bottom becomes necessary, of course, when fish hug the floor of the bay, especially when they have their eyes cast down.


Fish found in Zone Three do sometimes gather in schools. Targeting and locating them in such a situation normally involves first riding around and looking for signs of fish, meaning wakes made by the schools of predators, concentrations of baitfish, flocks of birds, slicks or muddy streaks in the water. If some kind of evidence of fish presents itself, drifts through the area often produce strikes.

All these strategies can allow one to locate fish in the swag. Marking the spots on the GPS where bites occur can allow for circling around and passing through them repeatedly. These methods become useless in a more common situation I encounter, one in which I make the basic decision that Zone One likely holds the greatest number of fish.

When fishing Zone One, I do so by wading. Additionally, I like to sub-divide the zone, again into three "parts" if possible, using depth as the primary defining feature. The shallowest areas atop the sand bars (and in some cases grass mats) extending from the bank become Zone One. The edges of those sand bars and grass mats make up Zone Two, and the potholes lying in the grass beds further away from the shoreline define Zone Three. The picture labeled Laguna Madre Shoreline Two, a close-up view of Zone One from the other shot, shows this in detail.

I will either focus on one part or another to start with, based on the prevailing conditions and recent history, or I will attempt to cover all three simultaneously until fish start providing us the clues we need to narrow our focus further. Essentially, fish found in the shallows prove easier to catch, because the vertical element of their location plays such a small role.

Using sound principles to make lure choices normally makes it possible to entice fish into striking. In one way, fishing this part of the area resembles fishing in the swagif fish roam randomly around without relating to a particular depth or part, catching good numbers of them becomes more difficult. If, on the other hand, they bunch up in certain areas, locating and catching many of them proves easier.

If I find and catch a decent number of fish along the edge of a sand bar, for instance, and scant numbers elsewhere in the area, I will generally get in the boat and move to another stretch of shoreline with a similar feature and try fishing it when the bite dies out, rather than walk around and try to find fish in other parts of the area without getting in the boat. Of course, that depends on how many fish I catch in the first spot. If I've caught upwards of a dozen, I will always make sure to be thorough before I leave looking for a new school, working my way through the lures, including soft plastics, before I do.

Generally, conventional topwaters and twitch baits work best to catch trout found in the shallowest parts of an area. But sometimes soft plastics on super-light jigheads prove more productive, especially when a hot bite begins to dwindle, or when the water temperatures drop down around fifty degrees. The same truths normally apply to the fishing in Zone Two as well, where water depths lie in the mid-range.

In the specific scenario shown on LMS1, the depth of the water in Zone Two normally eliminates wading as an option. If I decide to target fish in this corridor, I will sub-divide the zone into three parts of relatively equal size, meaning the shallowest part closest to Zone One, a middle part, and the deepest part, including the deep grass beds lying on the edge of the swag. As always, I try to determine which part likely holds the most fish before starting my search, using the prevailing conditions. Then, I begin making drifts to verify my hunch, working through all three zones eventually if necessary. Since I can normally see features on the bottom in this zone, I'll often target areas with anomalies like potholes to further focus my drifts.

This kind of systematic method does several important things. It facilitates a more thorough and analytical approach, increases one's focus on the task at hand and allows one to make more sense of the situation. All these things enhance the ability to locate and catch more fish.

Other types of areas in other bays can't be divided into three parts in the same way as a portion of the ULM. A large oyster reef, for instance, begs for the following division: the shallows atop the reef as Zone One, the edges of the reef including areas where scattered shell covers the bottom as Zone Two and the muddy bottom adjacent to the reef in the swag as Zone Three.

In the end, I do all this analysis and division for one purposeto increase my chances of finding small parts of an area which hold rich concentrations of fish. Schooling fish prove much easier to catch than scattered ones, because their natural, competitive urges make them more aggressive. In some scenarios, fish won't reliably gather in predictable places, necessitating a "grinders mentality."

Using a specific plan like the one I've detailed here can help one recognize and cope with such scenarios. But on many occasions, narrowing the search through division into thirds helps one locate aggressive fish which strike readily. All anglers, regardless of their level of expertise in making finicky fish bite, benefit from finding concentrations of fish in places with definable features.

Author's note: I've created two more photos of a different type of area and labeled them the same way I did with the pictures included here. To view the photos, visit the Blogs page of CaptainKevBlogs.com and click on the blog dated 1/10/2015.