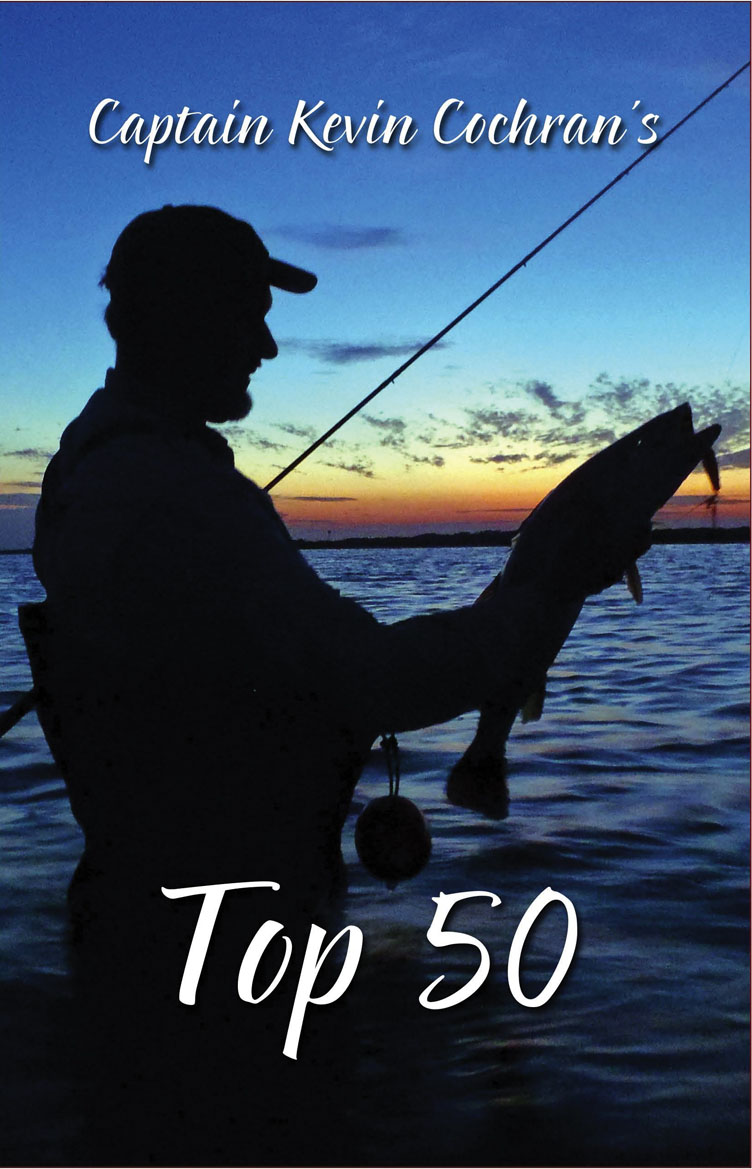 I recently completed work on a new book. The 191-page text is an anthology containing fifty articles previously printed in this magazine. During the process of going back over the articles, I realized I have changed my opinions about a few specific things related to the sport of lure fishing for speckled trout.

I now place much less emphasis on the color of a lure than I did a decade or more ago. I'm often asked to give advice about color, and I do so readily. In fact, I have created charts on which I specify my preferences for colors in different conditions. I've also given recommendations for colors in print and on the DVDs I've created.

As my fishing career has evolved, I've come to believe lure choice and presentation style are almost always more important than color when it comes to producing strikes. Most people place too much importance on color, or so it seems to me. The majority would be better off if they spent more time and energy trying to figure out which lure is best suited for the moment and how to optimally present it to the fish, instead of fretting about the specific hue of the lure.

Studies show the eyes of spotted seatrout are different than human eyes. For instance, trout see colors within a relatively small range, when compared to us. They see blue best, and red and pink fall outside their range of discernible hues. To read more about how a trout's eyes work, go to www.CaptainKevBlogs.com, click on the word Blogs in the banner, and check out the piece I posted about the topic on July 13, 2012.

My opinions about other concepts related to the sport have changed too. I once considered large topwater lures to be the best to use for tricking trophy trout. Early in my career, I caught most of my big trout on full-sized Super Spooks, and considered them the main staple in my arsenal. While I still use magnum plugs on occasion and know they will produce bites from big trout, I now think of them as more of a specialty offering, rather than a "go to" choice. Especially in hot weather, when fast, erratic presentations tend to entice more bites, smaller floating plugs will produce more big trout.

Most importantly, I've come to realize all floating plugs have limited potential in many fishing situations. When water temperatures are in the low to moderate range, other lures in the quiver will produce more bites than topwaters. Though some of the best topwater sessions occur during the winter months, the productive use of floating plugs during Jack Frost's months is dependent on several variables, the most important of which is the feeding mood of the fish. When trout are ravenously feeding in winter, they will often blow up on topwaters with reckless abandon. Most of the time, they are sluggish and reluctant or totally unwilling to rise to the bait.

A trout is a trout, wherever it is found. This mantra rang true with me when I started publishing work in this magazine over fifteen years ago, and it still does to this day. However, after fishing all over the state, in various locations and bays, I've come to realize some patterns are bay-specific. Consequently, locating and catching trophy trout in different bays requires an angler to understand certain things about the bay in which the fishing is done. Trout on the Upper Coast of Texas behave in slightly different ways than do those in the Coastal Bend and the Lower Coast, as a result of the different environments in which they live. These variations in behavior are most extreme when one contrasts fish found in relatively shallow, hypersaline lagoons like the Laguna Madres and Baffin Bay with those in deeper, brackish bays like Trinity Bay and Sabine Lake.

Because our bays are not all the same, our sub-populations of trout aren't either. Anyone hoping to find and catch monster trout from the Louisiana Shoreline to South Bay will need to become versatile and skilled in a wide variety of ways. This idea has become more clear to me over the years of fishing and writing--a versatile angler has the best chance to be consistently successful. Anglers with the most thorough knowledge of the trout and the features of the bays have the best chance to keep their rods fully bent.

During the last decade and a half, I've come to understand a couple of other important things. For one, I know the fishing rod is the most important tool affecting one's ability to catch fish on lures. For another, I now know braided line is better than the monofilament I (and almost everyone else) was using back in the 1990s. The braided lines available to us today are far superior to those on the shelves back then, and all serious anglers should fill the spools of their reels with one of them.

Going back over the feature articles I've written over the years reinforced some concepts like these, and was a fun process indeed. Below, I've included excerpts from the introduction and conclusion of the book as a way of giving more insight into what it contains.

"In this text, I've selected fifty articles once published in the magazine. In doing so, I've chosen pieces which are crammed full of instructional information. I haven't included any articles focused on socio-political concepts, or those which were written for a more aesthetic purpose.

I have tried to compile a big portion of my best work into one document, hoping to provide a bounty of hard-core information within a neat and tidy package.

Within each of the sections, I've arranged the articles in chronological order, starting with the oldest one. Some pieces are harder to place in a category than others, but I believe the organizational format I've created is meaningful.

The reader will find many concepts repeated herein. This is a product of necessity; the truth does not change. Some of my opinions about these topics have changed over time, as astute readers may realize. I hope the recognition of my progression of thought spurs careful readers to formulate their own theories and opinions.

I've made minor revisions and additions to many of the pieces, and have sometimes indicated the additions through the use of italics. Mostly, these works are reproduced as they appeared in the magazine originally....

While I was working on this book, a few things became apparent to me. I have, over time, developed some concepts quite thoroughly. In most cases, I have written about these tenets more clearly and precisely in recent years than I did a decade or more ago. Such a phenomenon is, I suppose, the natural result of growth through experience, both in the fishing arena and in the world of writing.

I have strong convictions about many aspects of trophy trout fishing, particularly the features which define the gurus of the sport, and some of the specifics of the skill sets they share. With regard to some of the details, my opinions have changed over the years...

I had a blast going back over these pieces and reviewing them in order to make this book. The metaphorical trip to the past was a fun and enlightening one....

Producing a book like this reminds me of the magical connection between my writing and fishing careers. I could never have prospered in either one fully without the influence of the other. A kind of synergy developed between the pursuits. The process started soon after my work appeared in the magazine, when I realized I'd found a ready audience, a legion of anglers eager to soak up all they could about the sport we share and revere.

So, thanks to you, my faithful readers, for fueling the fires which warm me from the inside out! I could not have developed these concepts so completely without your willingness to indulge me and read the work.

To date, I've published perhaps a half a million words on the topic of trout fishing. I hope I survive long enough to script about a billion more!"

I'd like to thank Everett and Pam Johnson for the hard work they do in publishing this magazine, providing me and others a forum in which to do something so rewarding and fulfilling. Truly, none of my books and DVDs would exist if not for the support they and others have given me. My new book is more than a review of some of my best work; it's a tribute to the success of Texas Saltwater Fishing Magazine and to the people who helped build it into such a fine publication.


Captain Kevin Cochran's Top 50 can be purchased online at either www.FishBaffinBay.com or www.CaptainKevBlogs.com. A list of the titles of all the articles included in the book can be viewed on the blogs page of CaptainKevBlogs.com.