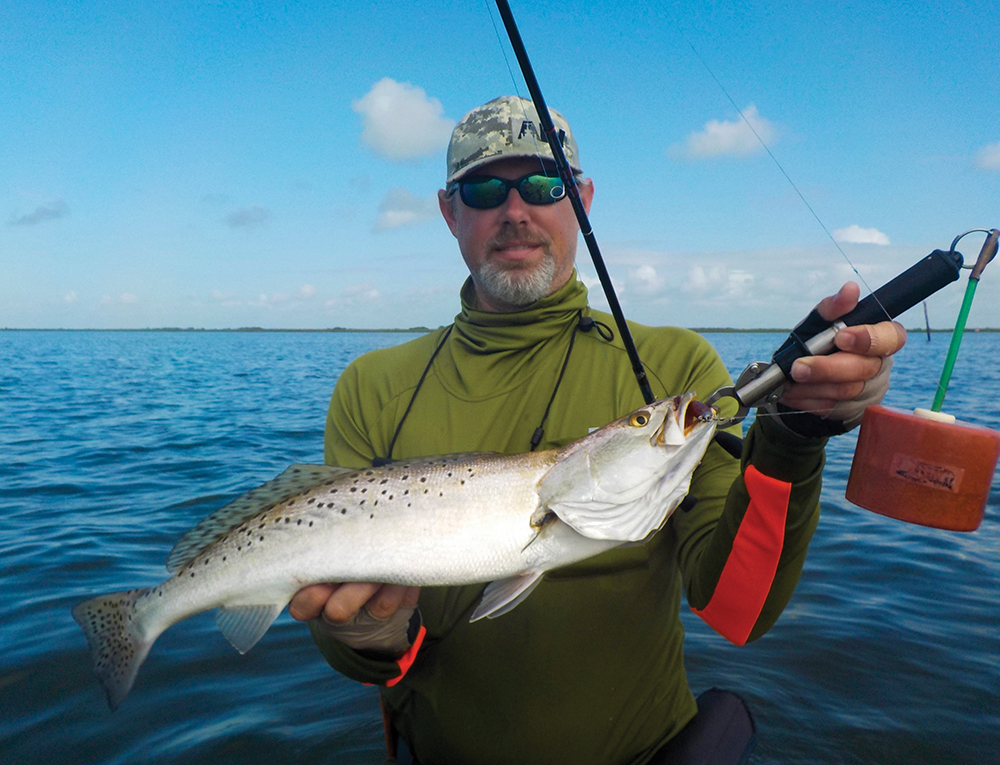 Eric Grones caught this solid trout on a soft plastic tossed atop a shallow grassy hump surrounded by deeper water during the morning hours, a typically productive pattern during the hot months.

Over time, I've become more analytical when thinking about the art of fishing. These days, I often work to describe aspects of the endeavor in scientific or mathematical terms. This allows me to draw conclusions about the decisions and actions I and others make and take, and how we might refine our processes to optimize their efficacy.

Measuring productivity in fishing usually means adding up how many fish come to hand, or how many fish one can convince to take a bite. For anglers who deploy artificial lures exclusively, two aspects of the effort affect productivity profoundly—intensity of focus and effectiveness of presentation. Significantly, these parts of the effort simultaneously contribute to and vary in response to the rate at which bites occur.

Of course, many variables affect an angler's ability to earn strikes, in addition to their own levels of focus and effectiveness. The relative abundance of fish swimming within an angler's reach ranks high on the list (perhaps at the top) of external factors which affect bite frequency. This relates to what I call Absolute #1: You can't catch a fish that isn't there.

No amount of focus, creativity and/or persistence can change that fact. But, in most situations, anglers do stand within reach of a number of fish with some level of appetite. Fish don't always have ravenous appetites, so their level of hunger also plays a role in determining how many bites an angler in their midst will likely earn within a given period of time. Certainly, more hungry fish swimming close to the angler creates a higher potential for earning strikes.

So, assuming one makes an effort in a place holding an adequate number of feeding fish, intensity of focus and effectiveness of presentation will affect how many strikes an angler earns. If and when bites begin to come regularly, focus and effectiveness both increase. In some cases, this can produce an optimal scenario, where the angler achieves a form of fishing nirvana and becomes fully engrossed in the tasks of casting, working the lure, reacting to strikes, fighting and landing fish, then repeating the drill.

In the past, I've compared an angler in such a scenario to a bird dog “on point,” after the animal has spotted a pheasant or covey of quail. This analogy now makes little or no sense to me. A trained canine freezes when it sees the bird(s), but an angler in “hyper catch mode” constantly incorporates motion into the mix. I now prefer comparing the angler in such a scenario to a well-trained hurdler running a race.

When functioning at the highest level, these athletes focus intently on the steps they take and how those steps conform to the need for executing a leap over each hurdle, all while maintaining as much forward speed as possible. They take measured steps in anticipation of the leaps, ideally without altering the fluidity of their movements. When executed properly, this makes an accomplished hurdler appear to glide down the track smoothly, before leaning forward to tear the tape ahead of the other runners.

Perhaps an athlete participating in the steeple-chase event makes an even better analogy, since that race requires jumping over hurdles and over a water feature, with fairly long spaces between the barriers. Track stars who master the steeple-chase must learn to adjust their steps and the pace of their running throughout the event, in order to conserve energy to use in bursts throughout the race. This more closely resembles what an angler does (though in a much more subdued form) when bite frequency reaches its highest level.

An angler who earns a strike on several consecutive casts becomes much like a finely tuned track athlete, supremely focused on the details of all the movements involved in the process, effectively repeating aspects of the presentation to produce strikes, while remaining ready to react appropriately when they come. The angler moves seamlessly from one catch to the next, like the hurdler or steeple-chaser moves from one hazard to the next. Of course, the angler's “race” has no set length, like a track star's does. The state of fishing nirvana might last for four or five caught fish, or much longer, depending on the number of fish available and their levels of appetite.

Of course, if bite frequency stays high enough for long enough, another rule governing these processes will inevitably come into play. The angler will either succeed in catching all or most of the fish swimming within reach, or at least in causing most or all of them to take a bite. Or, the feeding mood of the fish will change, as they become sated and full. Either way, bite frequency will predictably diminish, ending the catching frenzy and the seemingly magical angling mindset associated with it.

Then the negative effects of declining bite frequency will exert their influences on intensity of focus and effectiveness of presentation. If this goes on for long enough, and bite frequency drops to a low enough rate, a kind of numbing effect will occur, and many anglers will fall into what I've regularly referred to over the years as “autopilot mode.” Fishing in autopilot means mindlessly repeating movement patterns which don't produce desired results. In this mode, intensity of focus and effectiveness of presentation fall to near zero, and people predictably begin daydreaming, or participating in other distracting behaviors.

Most anglers have the capability to use at least some of their lures without really thinking much about what they're specifically doing to manipulate their movements. Most use a single, favorite presentation with any given type of lure. Inevitably, these become the de facto presentations when an angler falls into autopilot mode, and stops catching fish. All aspects of these presentations become dulled by the low bite rate. Obviously, if the angler still stands within reach of an adequate number of fish, adjusting aspects of the presentation thoughtfully and creatively would increase the odds of earning more strikes.

In some cases, people snap out of autopilot once they realize they've fallen under its spell. When this happens, they make a conscious decision to think more actively about what they're doing and intentionally elevate their intensity of focus with the aim of finding some more productive presentation, one which will earn more strikes and activate the positive effects of increasing bite frequency. Ironically, an angler who succeeds in this endeavor and earns a strike after making a bunch of unproductive casts risks experiencing the consequence associated with another phenomenon related to this pursuit.

The longer the lag between bites, the more intense and powerful this phenomenon becomes—an angler's speed of movement increases after a strike is earned at the end of a long lull without one. This relates to the first principle about the proportionality of focus, effectiveness and bite frequency, but in an exaggerated form. The sudden increase in intensity of focus spurred by a strike causes an angler's movements to speed up, sometimes with the effect of dulling or possibly nullifying the positive influence of an increasing bite rate on effectiveness of presentation. Even an angler who spent considerable time slowing down the presentation, focusing on a specific speed or cadence within the movements used to execute it, will normally speed up once a bite is finally earned. I assume adrenaline plays some role in this process.

The best golfers in the world seem to experience something similar, especially when they feel the pressures associated with contending in a big event. I've heard many of them talk about it, how they consciously attempt to avoid getting in a hurry, walking faster, rushing through their pre-shot routines and otherwise disrupting the rhythm and pace of the movements which put them into contention in the first place. Some say they actually try to slow down each of the steps they take as the pressure mounts.

For an angler, I'd say slowing down aspects of the presentation in response to rising bite frequency is actually a mistake; the goal should always be the same, to identify and maintain the precise intensity and pace of the aspects of the presentation which proved successful. An angler who gets excited after catching a fish or earning a strike and ending a long span of dead time should do everything possible to repeat the movement patterns which created the strike. This means actively fighting the tendency to rush things in anticipation of another bite.

An angler who becomes too focused on the next bite becomes like a golfer who allows the mind to focus on the next shot, or next hole, or worse, the final score, or the outcome of the match, rather than the shot at hand. In both golf and fishing, anticipation of future events diminishes focus on the moment in a destructive manner. In all facets of sports and life, dwelling on the future or past too much generally causes one to make mistakes in the present. This relates to another fact which governs all aspects discussed above—we can only control what we're doing now, precisely now, not what happened earlier or what might happen later.

Anglers who recognize this fact and remain intently focused on identifying and deploying an effective presentation on each cast will inevitably earn more strikes than those who don't. They will then enjoy the benefits associated with the synergistic relationship between their own actions and the effects of an increasing bite rate. Occasionally, they'll temporarily experience fishing nirvana.