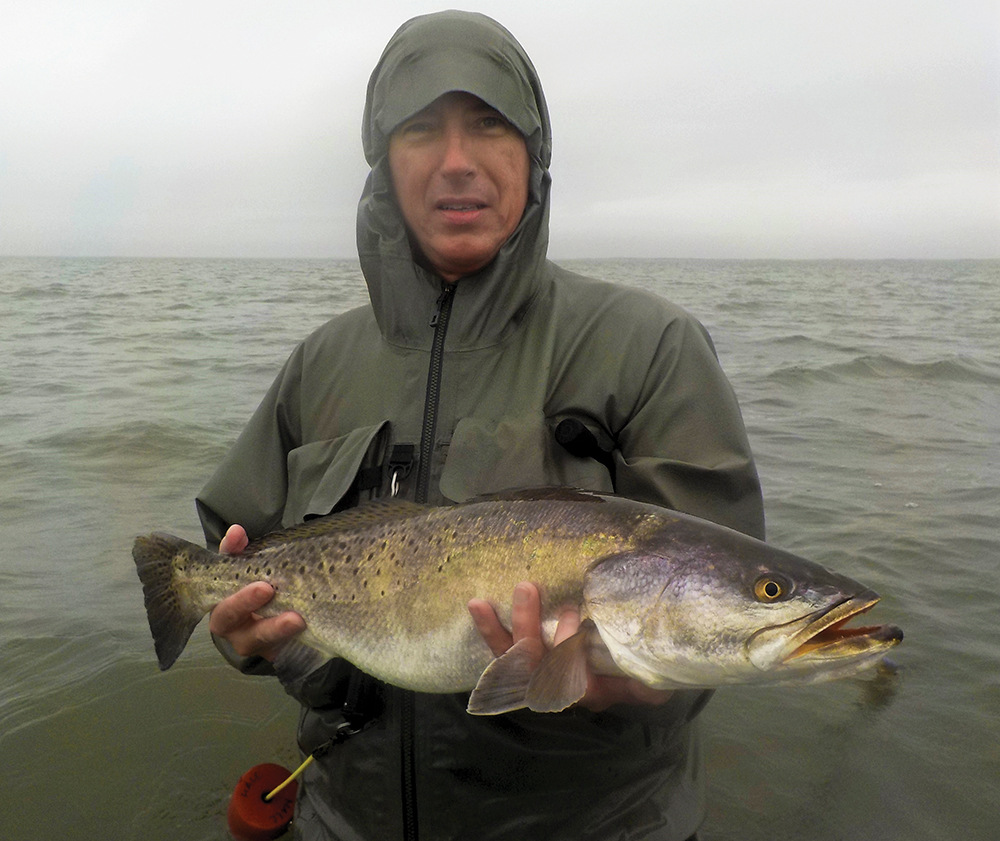 Richard Hall cast his sinking Fat Boy repeatedly into silty potholes lying close to serpulid rocks to catch this handsome seven and a half pounder on a trip to Baffin in late-January.

Three aspects of casting skills form a foundation for effective angling efforts made exclusively with artificial lures. In a basic way, categorizing these skills means placing them into a time sequence. The first involve preparations made prior to casting, the next include elements present during the execution of a cast, and the last encompass details related to optimizing the effective application of casts.

Before making any cast, one must place line on the spool of a fishing reel. Because of its obvious simplicity, this statement might seem useless in any meaningful discussion of all things related to casting. But my observations of novice anglers lead me to believe otherwise.  When placing line on a reel, an angler should fill the spool almost to the brim, leaving only about one-sixteenth of an inch between the edge of the line and the edge of the spool.  Attempting to cast without adequate line on a reel hampers angling efforts.

Many times, when I notice someone in my group struggling with casting distance, I see the problem clearly; the spool on their reel holds half to three-quarters as much line as it should.  Under-filled spools dictate shorter casts. This truth leads to a diminished potential for positive outcome; shorter casts create a slower catch rate, in general. Any reasonably serious angler should not accept a reduced capacity for casting distance, since this is an element well within our control.

Surely, over-filling the spool creates problems too. I see this happen frequently, when my customers allow employees at sporting goods stores to put line on their reels. These folks often fill the spools past the proper point, probably to prevent the customer from feeling cheated. In order to avoid this, I advise all anglers to fill their own spools, and to do so as precisely as possible, to facilitate the ease and effectiveness of casting.

Once the reel carries the appropriate amount of line, adjusting the spool tension bears significance in the quest to facilitate effective casting, in cases when the angler deploys a level-wind reel. As a rule, I advocate disarming all centrifugal weights if a reel has them and reducing the magnetic tension on the spool so a soft plastic on a light jighead will fall steadily and slowly from the tip of the rod when the angler pushes the thumb-bar to release the spool.  In other words, all casting should be done with minimal tension inhibiting the spin-rate of the spool.

Most reels come out of the box with at least two brakes activated. Some also have dials on the side plate with the brakes. If so, those dials are normally set to maximum tension. These two facts hamper casting efforts significantly. I, and almost all the other experienced anglers I know, always cast with no brakes activated, and all dials set to minimal levels. At the very least, a novice angler should learn to cast with no more than one brake employed, even when casting into the wind. Anglers using spinning reels need not concern themselves with this issue, since line flows freely off their spools.

Once an angler makes the reel ready, the skills related to executing casts come into play.  Whether casting with spinning or level-wind reels, the angler should always stop the line from coming off the spool at or just prior to the moment the lure hits the water at the end of a cast.  With level-wind tackle, this means controlling the spool using light pressure with the thumb, then pressing on the spool harder to stop its spinning. With spinning tackle, engaging the reel-handle just as the lure hits the water or slightly sooner will do the trick.

Over the years, I've watched many people struggle with “wind knots” while using spinning tackle. Truth is, wind has little to do with these knots; they form because the caster doesn't close the bail of the reel before the lures splashes down, allowing extra loops of line to fly off the spool.

Once the bail closes over these loops, problems start and knots form. People who use spinning tackle in a specific way tend to experience this problem in spades. By this, I refer to those who cast while holding onto the rod and reel with just one hand. These folks normally move the hand holding the equipment away from their body while casting, almost as if tossing the equipment toward the target. Conversely, most effective casters, whether using spinning or level-wind tackle, keep their hands close to their bodies while executing a cast.

With either type of tackle, I advocate a two-handed method, one which allows for pulling back on the butt of the rod with one hand, while holding the reel with the other.  With spinning tackle, this necessitates taking the hand off the butt of the rod while the lure flies forward, to engage the reel at or before the moment it splashes down.  With level-wind tackle, the thumb of the hand cradling the rod and reel at the balance point stops extra line from coming off the spool at the same point in the cast.

Regardless of which type of rod and reel an angler uses, thoughtful planning should precede each cast, with the goal of optimizing the application of the lure. Ideally, one can envision a specific reason behind every attempt to place a lure in the water. At the most basic level, this means continually and systematically moving casts around, either clockwise or counter-clockwise, in a semi-circular fashion.

By constantly changing the aiming point of each cast, the angler probes new water all the time, increasing the potential of presenting the lure in close proximity to a fish. This strategy should immediately change, of course, if one sees a sign indicating the presence of a fish within casting range. One should always remain ready to reel quickly in and cast to the spot where a mullet jumps, a shrimp somersaults into the air, or a slurping or swooshing sound indicates a feeding fish. More significantly, anglers should always alter plans after a strike occurs, by casting back to the spot, several times or even more, in situations when bite frequency runs low.

In addition to casting back to the site of a strike or at a sign of life and consciously casting to new water all the time, the smartest anglers also look for other reasons to send lures sailing toward specific places. When water clarity provides a view of the bottom, anglers should make casts which facilitate working lures close to all visible anomalies, edges and structural elements. This might mean casting and retrieving along the perimeter of a sandy pothole, probing the edge of a reef or rock, working a lure along or through a color change, or adjacent to a seam or eddy in the current.

In many cases, moderate winds blowing over the water carry potential to boost the effectiveness of these endeavors. Often, moving a lure along the edge of a grass bed, or in front of a structural element like a rock or reef, works best when anglers make casts at an angle to the direction of the wind. In fact, most presentations generally work best when made at an angle to the prevailing wind. Savvy anglers regularly choose to cast sideways to the wind, recognizing both the general advantages of the practice and the specific way cross-wind casts allow for creating speed while presenting lures parallel to fishy looking features.

Since my right hand and right eye dominate, I prefer making casts to my left rather than my right. Looking at a lure to my left feels more natural to me than looking at one to my right. I consider this fact when setting up an optimal attempt to work through an area. This contrasts with what I see many beginners and novices do; they tend to wade straight downwind and cast straight downwind, which limits their coverage of the area, in addition to limiting the creativity and precision of presentations.

Most probably prefer making casts straight downwind because doing so increases casting distance. As stated above, longer casts do increase bite frequency, overall. But longer casts don't always make more sense than shorter ones. When floating grass covers the surface of the water, anglers can cope effectively by looking for reachable areas with less grass and making short casts into those areas.  This sometimes increases the percentage of effective presentation time, compared to making longer, less-targeted casts, which result in repeatedly reeling in to remove grass picked up by the lure.

Similarly, short casts made to precise parts of the terrain lying in front of the angler often produce bites better than long casts which place lures well beyond those same features.  Ideally, some fishy anomaly, structural or cover element should lie between the angler and the end of every cast. Staying away from fishy-looking features and casting to them thus makes more sense than walking right up to them and casting away from them.

In addition to consideration of the physical construction of the bottom layout, anglers should consider the direction of current, if present in a place. Up to a point, all casts should allow for working lures in line with (or at least at an angle with) prevailing current.  This truth rings loudest when related to the use of slow-sinking twitch baits. When current strength causes one to lose contact with a lure worked with the flow, casts must be made to work the lure into or at an angle into the current, though doing so often causes a lure to rise in the water, hampering the ability of the angler to control depth of presentation.

Depth of presentation forms a critical component in the effectiveness of angling efforts made with artificial lures. Sometimes, fish like to strike lures floating on the water's surface. A special circumstance for casting arises when a fish blows up on a floating lure and misses.  Especially when such a strike indicates the presence of a big fish, smart anglers react quickly and systematically to a blow-up and miss.

For me, the best reaction involves pausing for a few seconds, to allow the fish to gather itself, then making three or four sharp twitches with the rodtip, to yank the head of the lure side to side, moving it just a short distance from the site of the strike. If I repeat this more than twice without enticing a second blow-up, I like to reel the lure in quickly and cast it a few feet beyond where the action occurred, then burn it back into the precise spot with fast turns of the reel handle, pausing it at the location.

This reaction to a perceived positive event often results in a subsequent bite, either from the same fish which struck and missed the first time, or another which witnessed the attack.  Either way, mindfully reacting to a blow-up and miss and casting back to the site makes more sense than mindlessly working the lure all the way in and allowing the fish to move. This emphasizes and clarifies the main point underlying the discussion of all things related to casting—working from an analytical, mindful state will set up and facilitate more effective casts, resulting in more strikes earned and more fish caught.