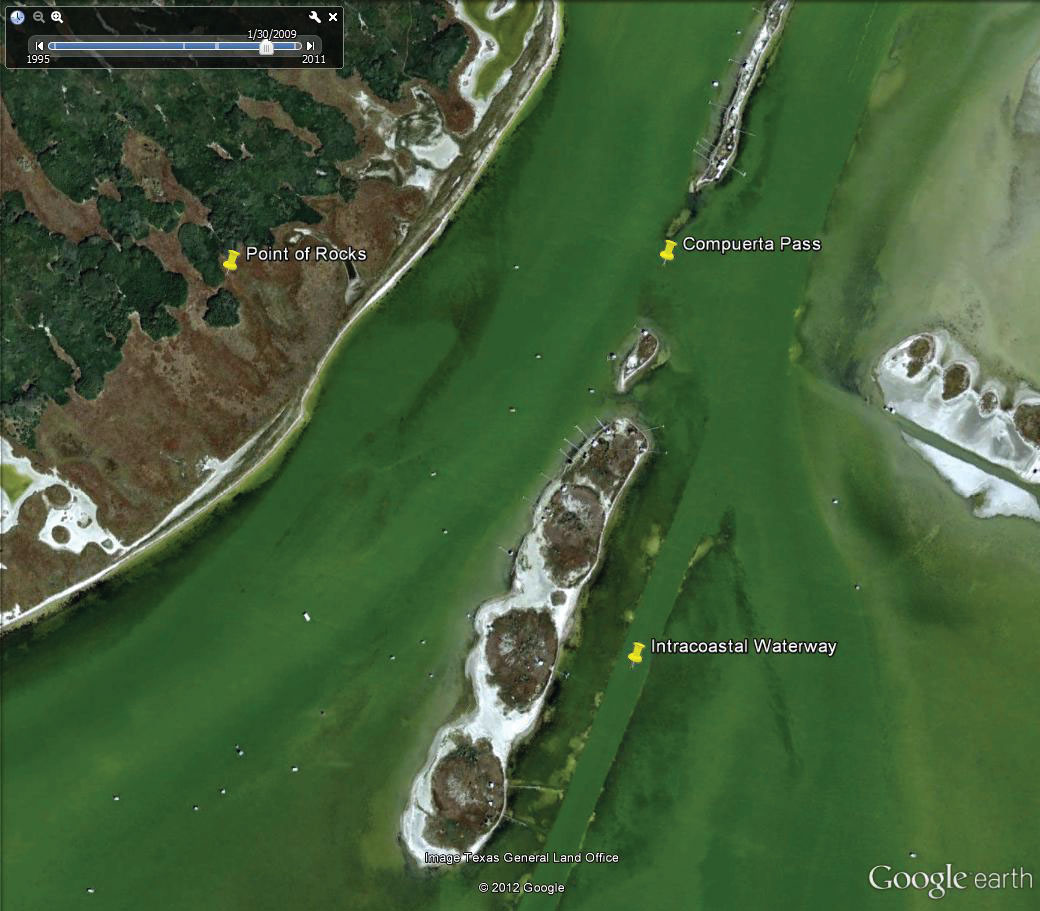 Since the turn of the millennium, I've witnessed many frightening and disturbing examples of frivolous boating behavior while fishing regularly in Baffin Bay. Rock formations stud the grassy meadows and stand next to shallow sand bars in this famous estuary, presenting a serious threat to safety. I assume everyone steering a boat through these waters is aware of the risks, but it seems some of these captains are relying on bad or incomplete information.

Modern GPS technology has made navigating all waterways easier and safer, provided the users of the equipment recognize its limitations. For instance, I am not aware of any currently available GPS charts which show all the rocks in Baffin Bay, nor do I believe such a data base exists. Some people apparently believe their GPS units do reveal all the rocks. At least their behavior in some treacherous areas leads me to this conclusion.

I've seen people run extremely close to and/or directly over rocks numerous times. I'm sure some of these people have the rocks marked on their GPS units and know exactly where they are. Without getting into specifically where and why, I acknowledge the "need", in some places, to run within twenty or thirty feet of shallow rocks. In other cases, doing so is too risky to justify, given the presence of better and safer alternatives nearby.

This piece is not intended to scold people who have many rocks and other obstructions marked in their units and who choose to run close to some of those things. It's intended instead to warn others who are ignorant of the incomplete and potentially misleading nature of current GPS maps in the area around Baffin Bay.

The evidence suggests the maps were created by people who had various kinds of information with which to work. Some major rock formations and virtually all the individual rocks within those formations have accurately located icons denoting them, probably because the map makers were provided exact coordinates for them. Other major formations have just one icon located somewhat centrally in them, creating an inaccurate sense of the size of the hazard.

In one case, a line of rocks perhaps a quarter of a mile long is indicated through the placement of a single icon, approximately in the middle of the line. A cautious but unknowing captain might swing well wide of the mark and still smack right into something solid. Marking large sets of rocks with one icon is bad enough, but GPS map makers also spawn uncertainty in other, more insidious ways.

In some cases, they apparently believe rocks exist in general areas, but they don't have exact coordinates for them, so they place icons in the area randomly. The problem with such a plan is obvious; boaters who run through the area do so with a fraudulent sense of safety.

In some of those places, rocks do indeed exist. Someone navigating through the area and avoiding the icons might be steered toward the boulders. In my opinion, the map makers should not randomly place icons in this manner. A safer plan would be to indicate the presence of rocks in the area without using icons, but they didn't do it this way, and the damage is done. Consequently, all inexperienced boaters should avoid running in areas where numerous icons designate scattered rocks.

Unfortunately, some individual rocks and rocky areas aren't indicated in any way on the maps. Though I certainly don't claim to know where all the unmarked boulders are, I have discovered many in areas commonly thought to be rock-free. While wading through these places numerous times, I often find multiple rocks after I find the first one. Some of these are "bottom huggers", though others reach up fairly close to the surface, particularly on low tides.

Admittedly, shallow-draft boats running on plane with their motors jacked fully up will safely pass over many of the rocks in Baffin most of the time. Those same boats might not bump bottom huggers when planing off either, if the tide is sufficiently high. But any boat scraping the bottom while planing off runs the risk of impacting rocks, and many boats can contact some of them while proceeding on plane, particularly on low tides. Running into rocks is obviously bad for boats and people. In a worst-case scenario, colliding with shallow ones at high speed can bring a boat to a dead stop and throw passengers around the deck or even overboard.

More commonly, when rapidly spinning propeller blades encounter unforgiving surfaces, the lower units responsible for turning those blades become damaged beyond repair. Sometimes, captains who wreck into rocks make it back to the dock before their motors become completely disabled, and sometimes they don't. If a harsh encounter occurs late in the afternoon on a day in which boat traffic is light in an area far removed from a shoreline or some other form of safe haven like one of the many cabins in Baffin Bay, the boaters might wind up spending the night bobbing among the waves. Without extra water, food, clothing and other safety equipment, doing so is at least uncomfortable, perhaps life-threatening, depending on the weather conditions.

Running into rocks with boats is bad for the rocks too. These fossilized remains of extinct marine-worm colonies are valuable not only because of their rarity, but because they provide a basis for the food chain. Consequently, they are excellent places to target trout, reds, and other species of fish.

According to locals who've been fishing this area for many decades, Baffin Bay's serpulid rocks are gradually eroding. I suspect this deterioration partly results from the naturally-scouring effects of time, wind and waves. I presume it's accelerated by increased human activity, specifically people walking around on top of rocks and crashing into them with boats.

All people choosing to navigate and fish the waters of Baffin Bay should accept both the danger posed by rock formations and the need to preserve them. Waders should avoid walking over rocks, and boaters should not run over them. Zipping around in an oblivious, cavalier manner with the motor jacked up and hoping for the best is foolish. Relying on the GPS to reveal all the risks is naive.

The best way to proceed in these treacherous waters is to use all available resources to locate as many rocks as possible, and to create and use safe running lanes. To aid in that effort, I've included two pictures with this piece to show some significant rocks lying in a high-traffic area. These boulders are not accurately indicated on any GPS map I've ever seen, but they are expansive and covered by shallow water, especially on low tides.

The image labeled Map 1 shows the general area, with the Point of Rocks in the upper left of the image, Compuerta Pass in the upper center and the ICW running more or less vertically through the right half. This area is traversed by many boaters on their way to the north shoreline of Baffin Bay. Over the years, I've seen dozens of captains run through the most precarious part of the area, some apparently unaware of the prominent rocks which provide the peril.

Map 2 shows the locations of five rocks I've identified in the middle of the flat between the Point of Rocks and the spoil bank to its east. As indicated on the map, these rocks lie basically east and southeast of the old pier on the shoreline (not to be confused with the bigger pier about a quarter of a mile to the north). The largest of these rocks, Rock 4 and Rock 5, are outlined on the map. Running and/or planing off near these formations puts boaters in real jeopardy.

Most experienced captains run on one side of this rocky ridge or the other, staying close to the mainland shoreline and running in the deeper water with bare bottom to the west, or running to the east, in a gut among the floating cabins. Less-experienced captains should be aware of misplaced rock icons scattered about on the screen in the gut on the east side.

To restate, I've generated this piece to specify some of the general threats to safe navigation in the Baffin Bay area for those who may have underestimated them. I've included the maps to show one location where I've personally observed potentially disastrous behavior on a regular basis. This piece is not intended to give anyone a specific plan for navigating anywhere.

I hope readers who realize they've been running over rocks in the area shown on the maps will stop doing so and will figure out a way to proceed in a safer, more ethical manner. Most likely, they are unwittingly taking unnecessary risks in other places. The mapped area is just one among many in Baffin Bay where unforgiving features lie in wait, always ready to ruin expensive equipment and disrupt the lives of the people with whom they make contact.

This region of rare rocks is a kind of Mecca to many; legions of hopeful anglers make pilgrimages here, buoyed by images and tales of its storied past. An integral part of the mystique of the place, the unique serpulid rocks sing like Sirens in an odyssey, calling captains close, promising treasured fish of heroic proportions; they also lure unwary travelers toward tangible danger.