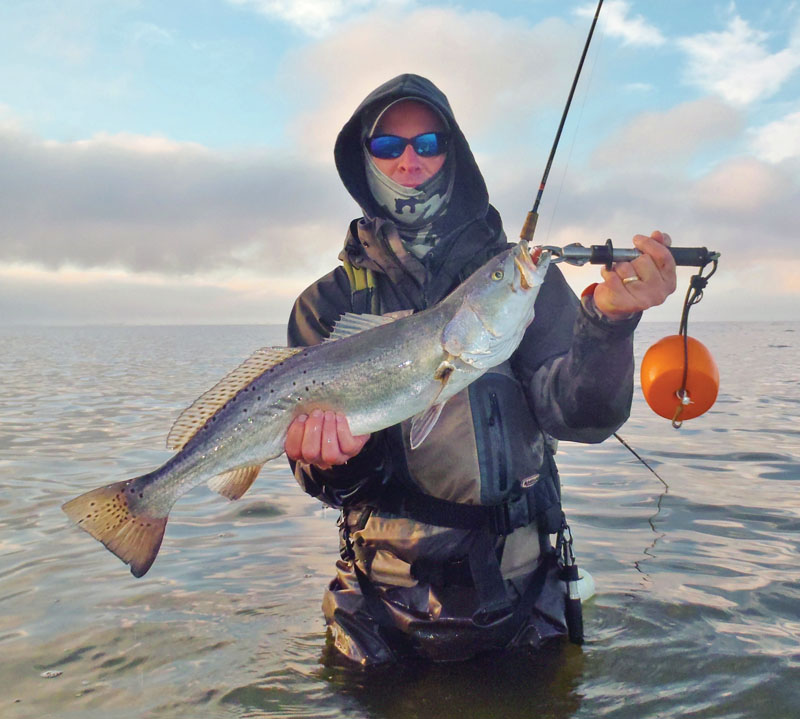 Scott Bryant caught this fat trout on a calm day during a brief warm spell between strong fronts.

In a normal calendar year, sometime around Thanksgiving or soon after, the water temperatures in South Texas' bays drop below 60F and stay low for a few days. This initial cold spell signals the start of the "winter trophy trout season" from the Coastal Bend to South Bay. Ironically, though December ranks among the better months statistically for me, I rarely book as many trips as I'd like.

Most people who actively pursue trophy speckled trout with artificial lures also hunt doves, ducks and/or whitetail deer. They think of the weeks between Turkey Day and the turn of the New Year as the perfect time to hunker down in a blind of some kind, with firearms at the ready. And that's perfectly fine for people who find themselves inclined to participate in those time-honored traditions.

For those of us who've largely lost our blood lust, who'd rather try and catch and release a trophy fish, the major hunting seasons provide a fetching window of opportunity. Crowds generally run light on the water, and on the milder days, we have some of the year's prettiest weather. Cold, crisp air over uncrowded waterways enlivens the spirits of people like me, who remember times when seeking solitude on the bays proved much easier than today.

Some people just don't like to fish in cold weather, in some cases because they wrongly assume fish can't easily be caught when the mercury shrinks toward the bottom of the glass in the thermometer. Honestly, I find the fishing in the early part of the cold period to be predictable and often productive, though the lulls between bonanzas can test the most-dedicated pluggers' patience. A quick check of the climate data for Corpus Christi reveals a few significant statistics.

The average high temperature in Corpus during December is 68, while the average low stands at a chilly 49. These are the second-coldest extreme daily averages of any month in the year. Only January brings lower temperatures, and each dips just one degree Fahrenheit below those in the Christmas month. Cold air temperatures do several things to make the fishing for trophy trout more predictable.

First of all, cold air temperatures mean cold water temperatures. Fish generally react in a predictable manner when water temperatures decline. In the first part of the cold season, roughly from about mid-November through mid-January, trout react to dropping water temperatures by seeking the safe haven of deep basins and holes. This rings particularly true for small trout, which often seem content to stay in fairly deep water throughout the entire period.

Consequently, coastal anglers who wish to target numbers of relatively small, keeper trout should focus efforts in some of the deepest water available in the area, especially during periods of time immediately after nippy north winds sweep across the bays. Excellent opportunity for catching exists in open areas of all the major bays from Sabine Lake to the Laguna Madre in such a scenario. Often, drifting through muddy streaks in the otherwise clear water proves the best way to find and catch schooling trout. Throwing soft plastics rigged on jigheads of a size appropriate for maintaining contact with the bottom generally provides an easy way to make cold-stunned fish strike.

Savvy anglers will wait for offshore winds to subside before making forays onto the unprotected areas of the bays where fish ride out the cold snaps. Strong winds make boat and lure control difficult, and while winds whistle and atmospheric pressure rises, fish generally sit sluggish on the bottom with their eyes cast downward. Once conditions settle down some, those same fish inevitably cast their eyes upward, begin looking for a meal and become relatively easy to catch.

If the water temperatures dip down low enough, trout often seek the safety of deeper channels and holes. In some places, the Intracoastal Waterway becomes crowded with small trout, particularly in stretches where lesser channels lead off the main waterway, and abruptly end. I won't pretend to know whether the fish find their way to these places because they want to avoid the effects of tides and wind-driven currents, or if they simply wind up in them because of the effects of those same elements, but I do know dead-end channels usually become crammed full of fish early in the cold season, if water temperatures plummet into the low-fifties or high-forties.

Part of the scenario, biologically speaking, has to do with the need to acclimate to changing water temperatures. In the first half of the cold season, without as much recent experience living in chilled water, trout prove fairly susceptible to the effects of a sudden decline in temperatures. Thus, they become lethargic easier, and they don't need to feed as soon after a strong front blows harsh weather in. Understanding this tendency for low activity levels in the wake of fronts in December and January gives anglers a better chance to time their outings to coincide with a sudden rise in the feeding mood of the fish.

Once a warming trend begins after the passage of a cold front, some of the biggest trout will move into shallow water, which warms up faster than deeper water. In some cases, numerous big trout find their way into muddy potholes or the shallows adjacent to areas with thick grass mats, in water barely deep enough to cover their broad, black backs. Bright sunshine can certainly enhance the potential for a super shallow move by big trout, but any warming trend in the weather can trigger such a move, regardless of the number of clouds in the sky. When big trout venture into really shallow areas, catching them often proves quite difficult, especially at first, while the fish seem content simply to warm up, rather than actively feed. Eventually, their hunger will drive them into a frenzied state.

Along different parts of the coast of the Lone Star State, various stimulators can trigger aggressive feeding sessions among hungry trout during late-fall and early-winter. On the Upper Coast, particularly in areas close to strong tide sources, a tide rushing in after an extreme low can provide such a stimulus. Relatively warm ocean water pouring into a bay generally creates conditions conducive for fish to rise off the bottom and swim around in search of a meal.

Conversely, a strong outgoing tide pulling relatively warm water off shallow flats into the deeper waters of an open bay can also provide rich opportunity for catching trout in the last month of the year. Especially in areas of Middle Coast bays, where many backwater lakes and coves fringe the main bodies of water, this pattern proves predictable indeed. The best days on which to take advantage of this scenario include lots of bright sunshine, which heats up the shallows, and long-standing high tides which turn and start out around the time the sun begins to set.

In fact, anywhere a strong tide surge coincides nicely with the coming of night, two stimulators come into play. In bays where the water becomes extremely clear in the first half of the cold period, this rings particularly true. Big trout become stubbornly nocturnal in such places; chasing their prey in clear water under the bright lights of day becomes a losing proposition. The trout don't really "know" this, in a cognitive sense, but specimens inclined to feed at night in such conditions have passed on their genes for eons, imprinting the habit into the species.

Fishing during both light changes (dawn and dusk) during the first half of the cold season proves particularly reliable. For most people, taking advantage of the often-frantic bite which occurs just as the blanket of night descends on a bay, during the warmest part of the day, makes more sense than getting up early and braving the coldest temperatures to take advantage of the daybreak bite. I understand such a mindset, though I have experienced many good sessions of catching during early-morning hours on cold days when others slept in, assuming the fish would be too sluggish to bite.

Though the early-morning bite proves less dependable in December than in months like February and March, trout still bite well on average while the embers of the coming day begin to glow in the east. On some occasions, this happens because the fish have become hungry again at the end of a period of low activity following the passage of the latest front. In my estimation, the timing of the fronts and associated "shut-downs" and "turn arounds" most profoundly affect the potential for catching trout in December, particularly large females, which like to eat other fish.

A predator which prefers to eat other fish tends to gorge voraciously when feeding, then sit dormant for some period of time, digesting what it has eaten. In cold water, the digestive processes of cold-blooded creatures slow. This scenario dictates a high level of variation in the feeding mood of trophy trout in December. When actively feeding, monster trout will attack fish-imitating plugs with reckless abandon during the Christmas month, creating the potential for some of the best catching of all.

Anyone interested in rolling the dice in anticipation of encountering schools of giant trout competing actively for slow-sinking twitchbaits and topwater plugs should consider making trips to the coast in the last month on the calendar. Some should call a guide like me; fishing pros normally have availability during the holiday season, when other pursuits pull many sportsmen into the marsh and field, leaving plenty of open spaces on our coastal bays and waterways.