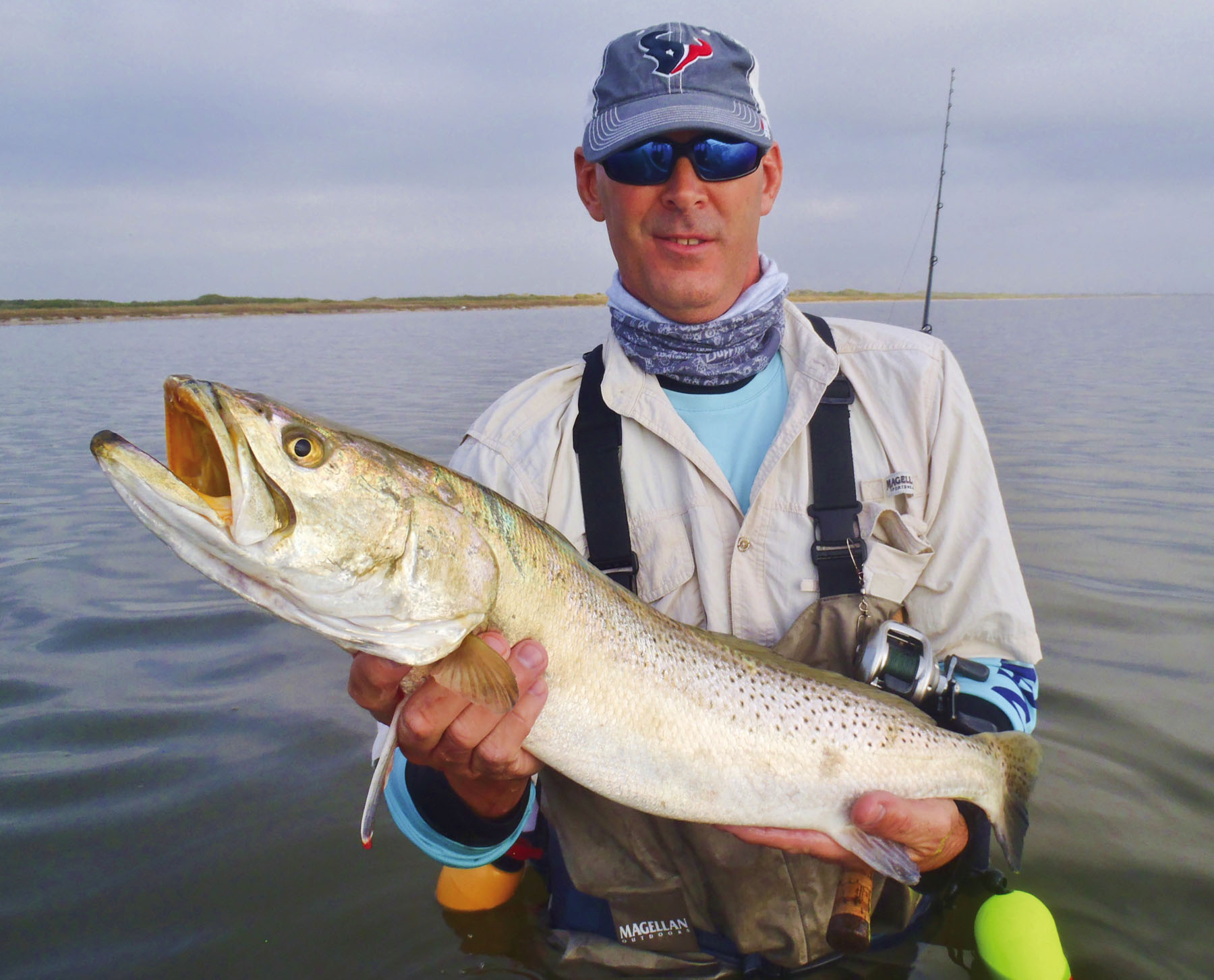 Scott Michal caught this long specimen in December, one of the good months surrounding February.
Many lure-chunking trophy trout enthusiasts try to find ways to improve their odds of increasing the size of their personal-best specimen. Doing so means identifying places where more big fish live and also narrowing down the best time-frames for effectively targeting and catching them. This process has led some anglers to develop what I call a "February Obsession" for fishing in Baffin Bay.

Some seem to believe the second calendar month offers significantly better opportunity for catching monster trout in this world-renowned estuary, particularly those who live elsewhere in Texas. Historical events and a few other factors help perpetuate this idea.

Nearly twenty years ago, several years after two major fish-killing freezes had occurred in 1989, anglers began catching monster trout in numbers in Baffin Bay. During this time period, a pair of significant stories became matters of public record, turning the bay into a metaphorical Mecca for trophy trout worshipers.

In February of 1996, Houston-area angler Jim Wallace caught a specimen which set the state record for the species, while fishing in Baffin. In addition to the 13 pound 11 ounce behemoth, Jim and his partners also landed other truly gigantic specimens, realizing a lifetime dream. Like a brush fire on the King Ranch, word about the record catch spread quickly, most prominently spurring members of the wade-first, lure-chunking fraternity to make plans to head to the rock-studded, hypersaline estuary.

A short time later, Corpus Christi-area guide Cliff Webb called Houston journalist Joe Doggett to invite him down for a piece of the incredible action. Unable to go, Doggett sent a younger colleague, Doug Pike, in his place. Pike soon recounted details about his day with Cliff on the pages of the Houston Chronicle.

They wound up catching about a dozen big trout, including one over 32 inches in length. Though the pair weren't carrying a scale that day, and they released the fish, they estimated the specimen weighed in excess of twelve pounds. Certainly, such a weight is possible for a trout that long, though it would not be the norm.

As pictures of the old sow confirm, she had considerably larger than average girth, so the estimate seems legitimate. Regardless of the actual weight of the trout, the general public had now seen the light, and it emanated from the treacherous bay framed by legendary cattle ranches and miles of undeveloped shorelines south of the JFK Causeway. The February Obsession had officially been born!

A couple of other facts related to those two highly-publicized events added further dimensions to the developing notion of the month's superiority in terms of providing a chance at a once-in-a-lifetime trout. Significantly, the lures used on both occasions became staples among trophy trout enthusiasts.

Wallace caught his record fish on a slow-sinking, mullet-shaped, soft plastic plug developed by Houstonian Paul Brown, who had recently begun making the lures at home and selling them from his converted garage. The popularity of the Corky spread about as fast as the February Obsession, and Paul began providing more lures than ever to a growing number of fanatical anglers.

Some of these anglers began publicizing preferred methods to use with the new, slow-sinking twitch baits, trying to educate the masses on how to effectively present them and catch fish. "Fish it slow, then slow down some more, and if you slow down just a bit more, you might be fishing it slow enough", they generally claimed. Not only did their mantra about how to fish Corkys become accepted as truth, many anglers also bought into the idea of the lures' effectiveness being limited to the cold season.

For years, I've been working to dismiss these concepts in the minds of the anglers I meet and attempt to teach. Paul's supremely effective family of lures, some of which are now sold as "Paul Brown Lures" by the MirrOlure company, will work well throughout the year to catch larger than average trout (as well as smaller trout, redfish and numerous other species), and a variety of effective presentations can be used to deploy them. Significantly, some of these presentations involve the use of vigorous rodtip action and speed bursts, defying the original slow, slower and slowest ideology.

Corkys weren't the only lures metaphorically moved to the front of the line in the minds of many anglers by the aforementioned signature events. Webb and Pike caught most of their trout on conventional floating plugs, or topwaters, the cigar-shaped style used with a dog-walking method. Late-winter does, indeed, prove a great time to use these types of lures on occasion, but like Paul Brown's lures, they will work in many kinds of weather, throughout the seasons.

Inevitably, some folks took what they learned by reading about Webb and Pikes' catch and developed a kind of tunnel-vision in their minds related to lure choice. Some of them (either directly or indirectly influenced by the famous article) evolved into what I call "topwater junkies", basically using the buoyant lures all the time, regardless of weather conditions, water temperature or personal observations.

Topwater junkies look like geniuses when their favorite plugs excite big trout into taking bites. Most lure-chunkers prefer catching fish on floating plugs. We all love to watch the foam fly and hear the hissing suds. The visual thrills associated with catching fish on top rival or exceed those provided by any other kind of lure fishing.

But elite-class anglers know one thing for certain: other types of lures often entice more strikes from fish in general, and from trophy trout in particular. The most accomplished anglers who catch large numbers of trophy trout and to do so consistently rely on multiple lures to get the job done, learning to match their choices to the needs of the moment. This ability to alter lure selection and presentation to match the changing tides and times can prove somewhat tricky in the month of February.

The Valentine's month does provide ample opportunity for catching monster trout on a variety of lures. I keep detailed records of what I and my clients catch, and also the ways in which we catch our fish. Statistically, February does stand at the top of the list of best months for catching trophy trout in the Baffin Bay/Laguna Madre area on artificial lures, at least for me.

Not only have I personally caught more trout measuring at least twenty seven inches on my own rod during the second calendar month, my clients and I have caught more trout meeting or exceeding the seven pound mark during the month too. I've personally caught nineteen trout at least twenty nine inches long during this time frame, and my customers and I have logged seventy-eight trout weighing at least seven pounds since I began tracking those totals in 2007.

Many of the big fish bit sinking Fat Boys, but others came to hand after taking floating Fat Boys or Corkys. Some attacked conventional floating plugs like Super Spooks, Skitterwalks and She Dogs. A few reluctantly swallowed soft plastics dragged in front of their noses on cold days when their bite attitudes proved negative.

Accordingly, it pays to stay prepared to fish with all three families of lures during this productive month. When the weather and water temperatures rise, and a breeze off the Gulf stirs up enticing waves, topwaters often produce heart-stopping blow ups. When things take a turn toward the chillier end of the spectrum, slow-sinking twitch baits worked lower in the water column often draw violent strikes. In years when Old Man Winter keeps a tighter grip on the thermometer during February, soft plastics rigged on eighth or sixteenth ounce jigheads work best.

Though this acknowledged great month does provide excellent opportunities for versatile, persistent anglers to catch the trout of a lifetime, the bites do not always come easy. In my record February, I and my clients caught twenty-nine trout weighing seven pounds or more, including sixteen over eight. However, in the eighteen days we fished, we only caught a fish on sixteen, and caught no more than 140 total. We averaged maybe twelve bites a day for the month!

The ease of catching fish generally improves in March, April and May. Truthfully, the percentage of big trout declines slightly in each of those months from the peak, but the spring months do remain statistically similar to February in terms of trophy production. I've had customers catch double digit specimens in March, and my heaviest trout bit a floating Fat Boy in April. I caught my first thirty-one incher and my longest to date, a 32- incher, in the mild month of May.

Additionally, I've documented excellent results in the two months leading into February too. In fact, I've logged a better percentage of trout exceeding twenty-five inches and twenty-seven inches in January, though the percentage of seven pounders lags slightly behind the best month.

Certainly, people cling to a February Obsession for a list of good reasons. But the idea that the one month far exceeds the others surrounding it in terms of providing potential for top-notch trophy trout fishing with artificial lures in Baffin is basically a myth. All of the cooler months offer patient, skilled and persistent anglers ample opportunity to catch a trout they'll never forget. Like many other obsessions, this one originated from extreme circumstances, and in the minds of many, it carries false and exaggerated significance.