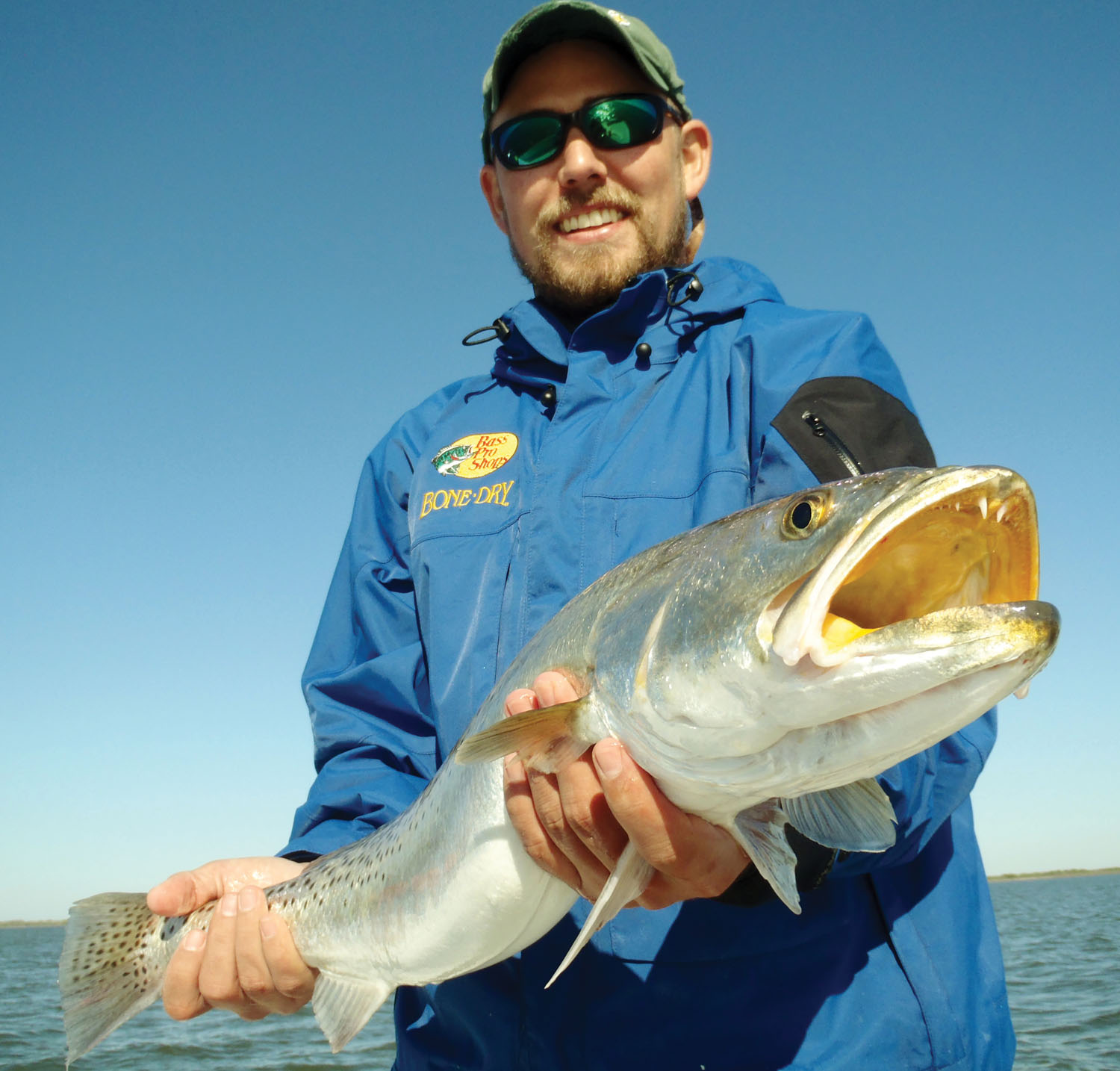 Experimenting with perspective enhances the ability to take unique and interesting fishing photos.

I arrive at the dock in pre-dawn darkness, per my usual way. After launching the boat alone, I don my waders, then wait for my customers to appear. Though I haven't yet decided exactly where I'll stop first, I know generally where I'm headed. At the end of the night, before first light, the early parts of my day mostly involve matters of the mind.

I don't fret over the details of daily plans, but I do remain ever conscious of the changes which dictate adjustments to location and strategy. Subconsciously, I also consider aspects of the journey, specifically what navigational hazards can and will come into play. Competent captains show vigilance and forethought; they work to anticipate and avoid things which might conspire to place them in harm's way.

I greet my customers when they emerge in the glow of the running lights, get their gear stowed and slowly back the boat away from land. And the most tedious part of my work begins. Turning the bow into the morning mists, I plane off and begin running down a track line on the GPS screen.

Moonlight periodically breaks through the low clouds, sprinkling the surface of the bay with pearl-white beads. Given the season and wind direction, I know I'm likely to encounter flocks of redhead ducks, and I warn my passengers, "If you feel me slowing down and hear me say 'I see a duck,' duck is the key word."

Sometimes, the boat ride creates anxiety, when conditions don't allow for clearly seeing what lies ahead. On this day, steady drizzle continually fogs up my glasses, so I stash them in my pocket. I keep moving my eyes from the GPS screen forward to the intended line of travel and back, working to stay in a safe lane, and also to monitor the water for any unexpected hazard.

Several times, I see the flapping silver wings and dangling black feet of redheads as they scurry out of the scope of the Q-Beam. Luckily for us, they always take off at an angle to our path, so we don't encounter them directly. As I like to say, "They don't taste real good cooked, and they ain't worth a flip to eat raw!"

Before crossing over the ICW, I stop and listen for tell-tale signs of a barge, and give myself ample time to both hear and see one. When I decide no such vessel lies in our way, I crank the Mercury back up and continue toward my destination. After several more situations in which I zig to avoid a floating cabin or zag around shallow rocks, I bring the Haynie off plane and idle to the site where I'll put the Power Pole down for the first wade.

Before we step into the water, I make sure my guys know the basic layout of the area, the best way to proceed through it. I also give them directions about what lure to tie on, and which presentations have worked well lately. Once we start slowly moving away from the boat, I know they expect me to act as the lead dog in the pack, to show them the way, to prove what swims within our casting range.

In this early part of the second phase of my day, the mind still reigns supreme. Once I have the group spread out, each angler set up with a piece of water to call his own, an evolutionary process gets under way. The middle of this angling endeavor moves my heart and stirs my soul. As I turn away from the others in the group to concentrate on what I'm doing to try to catch fish, I also turn back toward the cumulative events which have brought me to this place.

Almost instinctively, I scan the water for signs of life to indicate the presence of feeding fish, searching for a reason to make every cast, careful to match my presentation style with the feel and needs of the moment. I fall into a somewhat trance-like state, one fueled by energies lying beneath the veneer of the mind, sourced from deep within the spirit.

Essentially, I find my way to the center of the artful angler I seek. Within minutes, a fish provides positive feedback in the form of a bite, proving the worthiness of some aspect of what I'm doing. The event causes me to briefly emerge from my trance, as I pause to explain what happened to the members of the group, so they will have a chance to alter their methods to better match mine.

On the eastern horizon, orange, golden and azure lights begin to blaze as the clouds clear, in anticipation of the coming day. I pause and pull the camera from my shirt pocket, capturing a few images of the changing sky, to honor the sunrise. The act proves I'm not just an angling robot, incapable of appreciating the beauty which surrounds me. I understand the importance of focus in angling; I also recognize the need to stay in touch with the enchanting and picturesque aspects of nature, as a way of staying connected with the soul.

My heart beats for an angling artist, one focused on the details of the moment. My soul resides in a nether realm, suspended somewhere between the need to stay connected with nature and a desire to do the right things to preserve that bond. Mostly, it's found in communion with wild things, one I feel through braided line when linked to a fish I've enticed to strike. So I turn again toward my center, and begin catching trout.

From time to time, I hear and see my customers fighting fish, some of which prove worthy of commemorating with pictures. I do my due diligence, and stride over to where they play their catches out, then record the moments as best I can with the camera, instructing them on the best ways to pose themselves and the fish. I work to get the lighting and angles right, to effectively preserve the memories for all time.

This helps make the process pay. Taking quality pictures enhances the ability to provide experiences which etch themselves permanently into the memories of my clients. In essence, I work to make dreams come true, some of which can take most of a lifetime to realize.

At some point, after snapping several shots of a smiling client, I move back into my bubble, content to cast and work for another bite. A bit spastic in style by nature, I twitch my rodtip vigorously up and down, to make the head of my Fat Boy snap sideways in rhythm, back and forth, repeatedly. Occasionally, I pause the rodtip and reel the lure straight in, slowly. During one such pause, I feel the tell-tale thump of a bite and lift the rod up to feel the weight of a fish. Heavy trout, soon stripping line off the spool against the weight of my drag.

I can feel my adversary under my thumb, shaking its head in wide arcs. We battle, yes, but it's not a fair fight. I win after mere minutes, and reach out for the trout, my hand stretched wide, to span the specimen's broad shoulders. She's a hefty one. After briefly steadying her, I place her lip securely in the steel of the Boga Grip, and lift her gently from the water.

While admiring a wide, shining, dappled side, I see the fish's eye move--she stares straight into me. I can't help feeling we are nearly one and the same. After quick measurements, I place my prize back into the shadowy, wet world in which she belongs, and grasp her firmly around the tail, pushing her forward and back in the water so the gills flare, until I feel a hard thrust and she frees herself.

After watching the speck swim away, my gaze moves upward, toward a point of land in the distance, across the cove in which we wade. A raft of bait riffling there most likely indicates a school of feeding trout. I recall a dear, departed partner, who left many bootprints in the mud o'er that way. A friend to the trout, he caught and released several big ones in the space. Some of them likely still swim where he left them on those days.

Remembering him and his generous way, I feel tears filling my eyes. Not the hot tears of grief, but cool ones, tears of joy. I can sense the difference he made in and on the water today. Pale, peaceful light illuminates that place, bathing a passing gull in pearly luminescence.

The sudden, satisfied yelp of a client pulls me away from the memory, back to the business at hand. Turning, I see the man's trout thrashing at the surface of the water before him, throwing a shower of radiant droplets skyward, defying his attempts to control it. I move over to where the scene plays out, waiting for the fish to come within his circle.

When the short fight reaches an inevitable conclusion, I document the moment of their meeting for all to see. While I snap the shots, another client hooks a fish, and a noisy, new battle begins. He says with a chuckle, "We don't need no stinkin' trout call today!"

The catching continues steady for a while, but like all things, it eventually winds down to an end. Then, I move easily into entertainer mode, telling stories and jokes to pass the time until we come in.

Back at the dock, the journey becomes all about sustenance, about the body. After firm handshakes and pledges to do it again, my people and I part ways, exchanging a bag of fillets cut from the few fish we kept for a fistful of Franklins and the promise of emailed images. These angling endeavors predictably play out the same way. They emerge as a mind game, morph into a matter of heart and soul, then evolve into a survival mechanism, completing the circle of an angler's way of life.