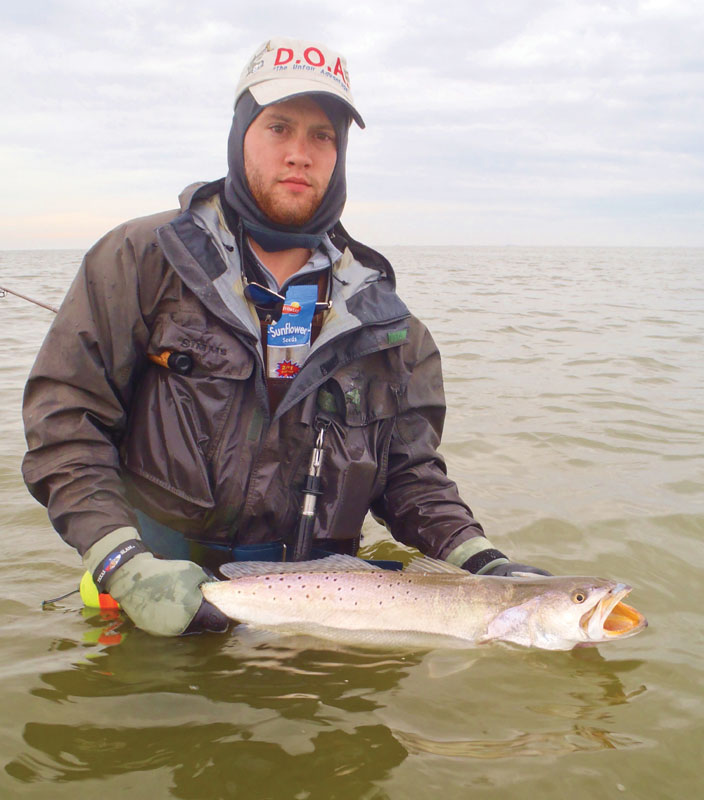 As is often the case, numerous large trout swam close together in cold weather when Matt McCollum caught this big trout, along with 3 others of similar size, casting around one small rock in Baffin Bay.

Some anglers have no interest in targeting a particular kind of fish. They'd rather just head out to the water, look for a comfortable and/or fishy-looking spot, toss some bait out and wait to see what bites. Such a plan proves fine for their purposes, but people targeting one species will find a more cerebral approach useful, particularly when they deploy artificial lures instead of live or natural baits.

When making an angling effort which targets a particular species, identifying the most important key or keys to success proves critical. Depending on the type of fish sought and the location of the event, the correct keys vary greatly. Some of the keys relate most closely to a search, while others involve aspects of the angling method.

First, one should always consider the biology and habits of the species when trying to figure out which key behavior facilitates the best chance of more catching. In all cases, the angler must locate members of the desired species in order to catch fish. One might realistically expect to locate schools of hundreds or even thousands of specimens of some kinds of fish, while finding just one or a few members of other species can prove difficult.

Catching pelagic fish generally involves recognition of important keys related to searching for them. Those hoping to hook and land species like mahi-mahi or king mackerel can reasonably expect to encounter large numbers of them. In fact, locating prolific schools might prove the only way to catch some. Conversely, people in search of black marlin, swordfish or bluefin tuna cannot really hope to find or catch so many. Generating a realistic expectation with regard to how many fish one can expect to locate and catch increases the chances for identifying the most important key.

Taking mahi-mahi as the target species, one would certainly realize catching plenty of them requires finding a place in the open ocean where a significant number of the brightly colored, fast-moving predators swim close together. Mahi-mahi prey on smaller marine organisms, and generally seek out their meals near or directly under floating mats of vegetation or other objects. Consequently, cruising around on the open ocean in search of weed lines and/or other floating stuff generally constitutes the first critical key to catching. Contemplating aspects of the physical act (method) of catching the fish proves futile, until one locates a place where fish likely congregate.

Of course, one might also find a marlin or other billfish in a similar place, but many times, locating these prized species involves covering lots of water somewhat more aimlessly, by trolling. Certainly, dragging a spread of lures through some areas will result in more strikes than doing the same thing in other places. Deploying a fancy spread and beginning the trolling session at the end of the jetties makes no sense; one must identify and access an area likely to hold fish before the physical application issues come into play. Using data about the surface temperatures of the water or visually recognizing color changes or signs of feeding activity can narrow the search. Whether targeting billfish or mahi-mahi, understanding the first critical key to locating the fish pre-determines the success rate of the efforts that follow.

Somewhat predictably, the critical keys change from season to season, day to day, even moment to moment. Certainly, once one locates an area holding enough members of the desired target-species, a paradigm shift occurs with regard to identifying the "next" correct key(s). The focus shifts from search to method, essentially.

The savvy angler who recognizes this truth will again attempt to whittle down all the possibilities and focus on the specific aspects of strategy which will most likely generate a positive outcome. Doing so involves correctly evaluating the evolving levels of importance of the specific elements of the method deployed in attempt to hook and land the fish, everything from depth of the effort to lure selection and presentation style.

The entire process remains fluid; changes aren't permanent, but continual change is. Specific strategies and methods which work for a while will eventually become less effective, so the most productive anglers constantly make adjustments accordingly. Several factors drive these vagaries, including time of day, tidal movements, celestial events and changes in the weather – in other words, all things which affect the feeding mood and habits of the fish.

Certainly, these facts apply not only when the angling effort focuses on offshore species, but also to one focused on an inshore species. Anglers seeking to catch flounder always first identify the specific places where they will likely find numbers of fish, taking into account the season, which affects where the migratory species will most likely appear. The most important key to consistently catching flounder involves acknowledging how seasonal variations in water temperature affect their location, as they move back and forth from their winter spawning grounds in the open Gulf to their shallower summer haunts.

Red drum migrate too. Immature fish generally spend time foraging in schools in our bays and estuaries, while adult fish live and breed in the nearshore waters of the Gulf. People hoping to catch a bull red will consequently need to identify completely different keys to optimize the efficiency of their outings than those targeting slot-fish in a shallow bay. Furthermore, locating schools of fish in the bays means properly identifying what clues most likely aid in the search. In murky waters, finding mud stirs in open parts of the bay might lead to the mother lode, while in clear waters, visually spotting the schools of fish becomes possible. In either case, the most important initial key involves figuring out how best to determine the location of a school of fish, while subtle aspects of the catching strategy remain basically irrelevant.

Similarly, catching speckled trout on a consistent basis means figuring out which key or keys bear the most significance at a given moment. First, the angler should really choose between fishing for numbers and fishing for large specimens, since the keys to success in the two endeavors differ significantly. Anglers chasing limits of small keepers in the warm period, for instance, might recognize the most significant initial key as locating flocks of seagulls hovering over schools of fish in open waters. They'd correctly assume catching the fish will be relatively easy once they're located.

On the other hand, trophy hunters face an entirely different dilemma. In one way, catching large trout does not differ from all other species-focused angling efforts – one must locate some fish in order to catch some. The moderate seasons and mild weather make catching big trout somewhat like catching pelagic fish, meaning the search keys become paramount. Comfortable water temperatures and consistently suitable habitat tend to spread fish out, resulting in the need for more on-the-water searching on the part of the anglers targeting them. This generally means looking for areas with multiple signs indicating the presence of the fish, like copious amounts of forage species, slicks, mud stirs and wakes.

When large fish roam or sit in large areas covered with shallow, clear water, visually locating individual fish becomes the paramount key to catching them. Anglers who recognize this will always time their efforts to occur under enough light to see the fish, recognizing that moderate wind speeds greatly facilitate the search. Too much cloud cover and both calm and strong winds will render such plans obsolete.

On the other hand, extreme conditions simplify the search for trophy trout in some ways, and elevate the importance of subtle aspects of the physical methods deployed. Strong winds tend to create extreme tide levels and eliminate entire areas, while both high and low water temperatures concentrate numbers of fish in relatively small spaces. In such cases, the smartest anglers won't waste much time looking for evidence of the fish; they'll immediately start trying to identify the correct key aspects of the method without thinking much about where to make the effort.

In other words, successfully catching trophy trout in extreme conditions most often results from a focused approach made in a relatively small area, one chosen appropriately, of course, considering the environmental variables. Many potentially paramount keys can lead to the optimization of such an angling effort, including pace of movement, depth of the effort, lure choice and presentation style.

For instance, anglers targeting trophy trout in cold weather often have little trouble identifying a basic location which likely holds some fish. The best anglers also recognize one or more "micro sweet spots" within those areas and realize the key to catching resides in identifying which specific aspect of the physical angling effort holds the highest level of importance from moment to moment.

Much of the time, this requires them to figure out exactly which lure to deploy and how best to present it to the fish. Reliance on sound operating principles provides a starting point in the endeavor, while systematic experimentation properly refines the principles. In cases like these, anglers correctly focus on aspects of the angling method, which provides the only real means of proving some members of the targeted species swim within reach. In that sense, the keys to catching prove interrelated; properly implementing the key method and enticing strikes becomes the only way to successfully carry out a "search."