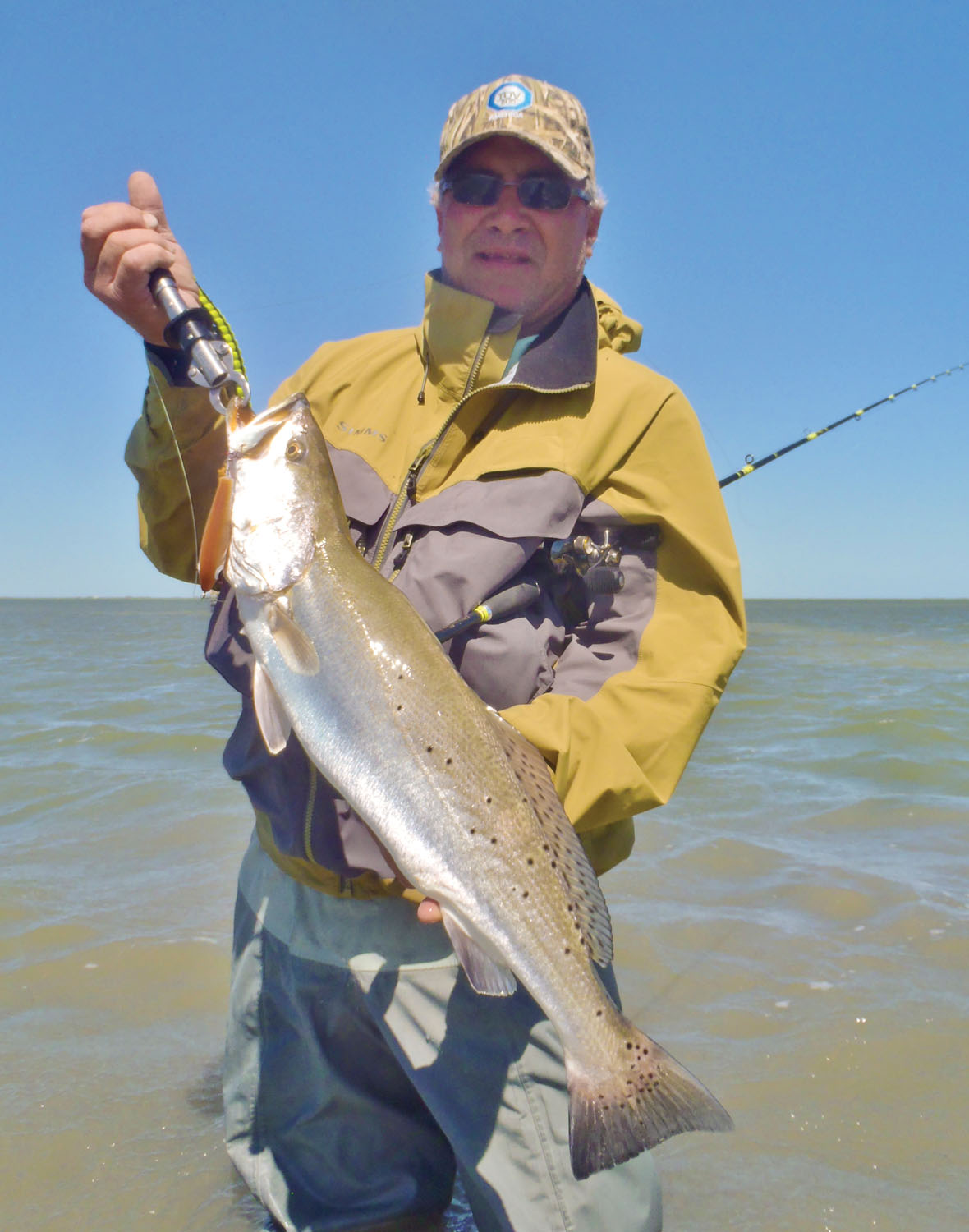 I first fished the Baffin Bay/Upper Laguna Madre in 1991, aboard the craft of Canadian-born guide Doug Bird. The dude could really fish, loved using lures, though he did bring along some live shrimp, mostly for my second wife, Holli May, who caught quite a few trout and redfish that March day. We deployed soft plastics dangled under popping corks until the wind started cranking, then fished with the shrimp the remainder of the time.

When we met him at the dock under the JFK Causeway, Doug announced Holli would catch the first, the most and the biggest fish. I didn't take the comment seriously, and laughed.When I questioned him how he could guarantee those things, he chuckled and said, “If you hook one before she does, I'll cut your line.”He looked me straight in the eye, sternly, for a moment, then smiled again. “I know I have to put a priority on her, keep her happy. That's what will bring you back.”

Certainly, Doug displayed a colorful personality. I recognized the sharpness of his wit, how he used his talented tongue and mind to help ensure we all had a good time, but I had greater respect for the way he wielded his rod and reel. The breadth of his skills for catching fish became more apparent the second time we fished together.

The next Spring Break, I returned to the Lagoon with a teacher/friend, Jack Branham. As on the previous trip, we fished from the boat, did no wading, this time using lures all day. The venerable, crusty guide preferred a method much like bass anglers use, working from the front deck of his Lake and Bay skiff, using a trolling motor to control its position. He told us, “We're going over here to this channel. I want to assess your skills first, so I can figure out the best thing for us to try the rest of the day.”

I recognized the wisdom of his plan. When he stopped the boat in the middle of a ditch near the Causeway, he instructed us to cast our soft plastics toward the drop-off downwind of us, where we could see a grassy edge sloping off into the depths. “Cast right up to the edge and engage the reel handle when the lure hits the water. Allow it to sink along the face of the drop-off, then twitch it up and down a few times at the bottom of the drop. If you don't get a bite, reel in and repeat.”

We caught on to the method pretty quickly. Actually, Jack did better than I. Having already developed a preference for throwing topwaters, using soft plastics with a specific and detailed presentation did not prove so easy for me. We caught a few dink trout there and the captain decided we could handle bigger and better things. So, he drove the boat south in the Lagoon, stopping somewhere along the King Ranch Shoreline. While he trolled toward visible, thick grass mats stacked tight against the sandy bank, he described the next plan of attack.

Each of us had tied a rat-tailed Bass Assassin rigged on a relatively light jighead on the end of our line. The jigheads came equipped with small spinners attached to them. Doug pointed at the water-side edge of a dark mat of rotting grass and instructed, “Throw the worm just past the edge and engage the reel handle before it hits the water. Then, raise your rodtip and reel fast, to keep the lure right on the surface, so it doesn't snag in the grass. When you see it get to the edge of the mat, stop reeling and let it flutter down to the bottom, then swim it in, reeling steadily, twitching the rodtip up and down repeatedly.” He articulated a presentation which proved difficult to master.

He explained why he wanted us to do precisely what he described. “When the tide's high like this, the mullet and other bait fish will swim into that shallow water sitting on top of the grass mat. When the tide falls out, they will be forced off the edge, into the deeper water in front of it.” While saying this, he pointed out thicker parts of the grass mat, which protruded through the water's surface, and parts slightly less thick, where a gap allowed water to flow over the top. “Those little gaps act like funnels, or fish highways, and the trout and reds lay around out in front of them, waiting to ambush their prey.”

My friend and I worked to master the technique, realizing the original importance of the timing of the engagement of the reel handle, the position of the rodtip and the coordination of the turning of the reel handle and the twitching of the rodtip in the swimming portion of the presentation. We caught quite a few solid trout and reds around those grass mats throughout the morning; most of them struck within a few feet of where our lures fluttered off the edges of the beds of rotting strands.

Once the sun climbed high into the sky, seeing the target zones became easier, but the bites less frequent. Eventually, Captain Bird pulled the plug on the plan. “We got to fish deeper now. The trout and reds don't feed well in this shallow, clear water once the sun gets high overhead.” He drove the boat into the Pure Oil Channel, and idled toward the end of a shorter channel, heading south.

He described a new plan of attack, one entirely different from the one we had just deployed.“The end of this channel has a hole about ten feet deep.” He stopped the boat and pointed to the depth finder. “What we need to do is throw our lure out and manually strip some more line off the spool once it hits the water, so it can fall vertically. Once we feel it hit the bottom, we'll make three sharp upward strokes, like this,” he demonstrated, while continuing. “The rodtip will finish way up high, then we want to throw it right back down toward the water, really quick,” which he did. Then he finished, “So the lure can fall on slack line. With any luck, once you raise the rodtip back up, you'll have a trout on the end of the line.” We watched him hook a fish on cue as he said this!

Again, my friend caught on to the technique quicker than I did. Losing contact with the lure felt so completely foreign to me, and I struggled with the timing of it. Both of them caught several keeper trout over the next hour or so. I have not deployed the technique at any point since. I have used a variation of the second one he showed us to great effect several times, the most memorable of which produced five trout over eight pounds, including a ten!

On that day, we threw sinking Fat Boys over grass mats lying along the shoreline behind the Tide Gauge Bar, engaging our reel handles before they hit the shallow water atop them and skimming the lures quickly to the edge, where we'd pause to let them sink. An outgoing flow flushed water through a narrow cut in the bank, allowing us to work our lures toward us with the current following them. As on the day Doug showed me the trick, most of our bites came close to the grass mats. Starting the presentation with the fat plugs landing on top of the grass allowed us to place the lures into the faces of the fish ambushing prey tight to the subtle edge. I don't believe we could have caught them any other way.

Truthfully, I don't often use the techniques the talented old salt taught me back on those days, but I do understand the profound truths inherent to his methods. I now realize all effective presentations rely on the fundamentals which made those work. Stated most simply, all productive presentations rely on precise coordination of the timing of the turning of the reel handle and control of the rodtip.

The specific position of the rodtip sometimes proves critical. Mostly, the tip of the rod should remain out in front of the angler, between the eyes and the lure. In some parts of some presentations, it should move higher over the head, often to facilitate keeping a lure near the water's surface, and occasionally it should move down closer to the water.

Many useful presentations involve rhythmic twitching of the rodtip. Twitching the tip up and down or side to side through a fixed point works best; as opposed to twitching the rodtip from three o'clock to twelve o'clock. I see people do this frequently, because they stop turning the reel handle when they start twitching. They lift the tip instinctively, realizing they must in order to prevent slack line from wrapping around it.

The most effective anglers learn to use the reel handle to control the build-up of slack during presentations which involve rhythmic twitching. This allows them to maintain control over the movement patterns of the lures they throw. With a few exceptions, maintaining control over a lure throughout a presentation provides superior performance. With some presentations involving soft plastics, temporary loss of control of the lure provides better results, while the lure flutters and falls on slack line. Significantly, learning to present soft plastics this way also requires one to remain cognizant of the timing of the turning of the reel handle and the position of the rodtip.

Pausing all movements during a presentation causes any sinking lure to settle lower in the water column. This allows an angler to control the depth of presentation. Presenting lures at the proper depth increases productivity, as does placing them into the appropriate specific places within the general area. The lessons I learned from Doug Bird's methods prove all productive presentations rely on control of the depth and movement patterns of a lure placed in close proximity to predatory fish.

Novice lure-chunkers regularly make several common mistakes which reduce the number of fish they catch. For one thing, they often allow the lure to plop down on the water at the end of a cast, before engaging the reel handle, increasing the frequency of backlashes and reducing their control over the lure. Many also stop reeling when they start twitching, causing them to lift and twitch. In the worst case, they actually release the reel handle altogether while twitching. This is a fundamental mistake.

To avoid these problems, one should work to learn to control the timing of the turning of the reel handle in coordination with the twitching of the rodtip. To get the hang of this, one can tone down the intensity of the twitching for a while, focusing more on keeping the reel handle turning while making short, light twitches. During this process, one should keep the rodtip out in front of the face, basically in line between the eyes and the lure.

Lastly, one should consciously predict where fish likely lurk in the area, and seek to make presentations at specific depths in those precise places. This type of focused effort elevates the potential for productivity, compared with more random processes which often devolve into what I call auto-pilot. In such a numbed state, anglers typically repeat the same movements over and over again, expecting a negative result to change. In the end, such counterproductive behavior becomes, by definition, a form of insanity.