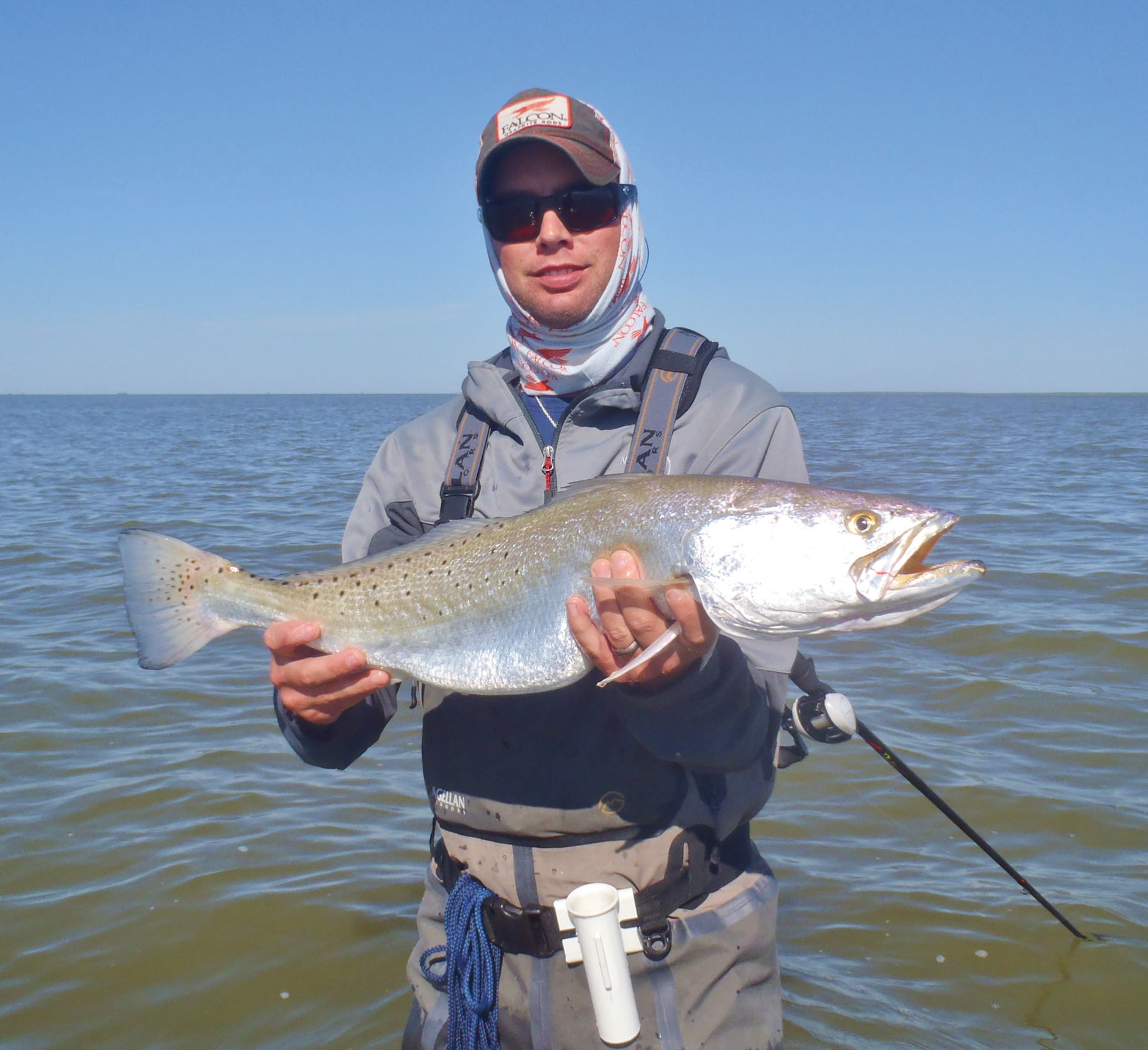 West winds muddied up the water on a cool morning in late-April before Clay Williams caught this pretty trout on a soft plastic.
While manning the wheels of remarkably effective, shallow-running boats, most coastal anglers occasionally pass over fish in water clear enough to see them. Some, of course, intentionally an attempt to locate fish by "burning" through the shallows every time they embark on an outing, navigating from specially designed towers, which allow them to see more of what's in the water as they go.

I generally find tower boats obnoxious, and I wonder about the dangers inherent to operating a skiff in skinny water while standing in a bucket so high above the deck. My disdain for such things reflects a personal attitude, but does not make the activity unethical in a broader sense. I do believe locating fish by sight while driving a boat has both positive and negative potential outcomes.

On days when lighting and water conditions make seeing into the water easy, most of us will eventually find ourselves passing through areas where we observe plenty of fish swimming around. In cases where we locate the right kind and/or size of fish, we will likely shut down and either get out and wade around trying to catch some, or perhaps put the trolling motor in the water to accomplish the task.

In other cases, we might make a mental note as to where we have seen the school, or mark the location on the GPS as a waypoint, so we can return another time to try and catch some, without first spooking them with the boat. Schools, pods and even individual fish sometimes stay in relatively small areas for extended periods of time; many anglers know returning to a site where they've burned fish can produce excellent catches.

Often, people see a single, large trout in places surrounded by lots of empty water, when passing through shallow areas. It might pay to mark the site and return later, using more stealth, to attempt to catch those fish. Allowing the spot to "rest" for a couple hours might, in many cases, make the fish much easier to catch, as opposed to shutting down close by after burning them, and then casting at them within mere minutes. Coming back a day or two later might even make more sense.

Making such a patient plan pay off requires the fish to remain at or close to the spot for a considerable amount of time. I'd say the likelihood of a fish staying in a specific spot for days at a time depends on the attributes of the spot and the stability of the weather. If the area proves to be a "feeding station", meaning it regularly holds forage of the type the fish prefers, the specimen most certainly might linger there for extended periods of time. If, on the other hand, one sees a fish cruising through a transitional area, moving from a feeding zone into deeper water, for instance, finding it again in the specific location might prove quite unlikely.

Additionally, different species display different traits related to the tendency to remain in one place, as opposed to moving about over larger spaces. Immature redfish, for instance, gather into schools in the bays and move around while feeding, basically hunting as a pack. Schools of relatively small trout do the same, especially those intent on feeding on shrimp. In such cases, returning to the coordinates where we see such a school one day might rarely result in catching the same fish in the place. However, anglers who target such schools of fish know it pays to look for them in the general area after locating them, as they often remain within relatively short distances for several days or weeks at a time, particularly during stretches of stable weather.

Basically, I believe anyone who spots an individual fish or a group of fish which meet the standards for what they seek and who doesn't make any effort whatsoever to catch the fish can't see the forest for the trees. In other words, any smart angler would use the information they get to attempt to catch what they see; not doing so simply seems foolish and needlessly stubborn to me. Making an effort to catch a fish after seeing it first does not constitute "cheating."

I recall specific incidents where I (or in some cases, friends and partners of mine) saw large trout in an area one day, then returned later to the location and made a memorable catch. In a poignant case, a buddy told me he'd seen a "knee buckler" trout among some twenty five to twenty eight inchers in a long set of potholes adjacent to a shallow shoreline in the Upper Lagoon. Two days later, without any other particularly attractive ideas, I headed over there to see what I and a client might catch, though I hadn't fished the spot in a couple years or more.

Within no more than two hours, I landed a thirty two inch, ten pound specimen!

I don't know if I caught the same fish my partner had seen, and the truth about that really doesn't matter to me. He saw some of the "right" fish in the area, one of which appeared to be a true behemoth, and I caught one of the biggest specimens of my life there soon afterward. The events prove it sometimes makes sense to return to places where we see fish in the water, especially if those fish meet our standards for what we want to catch.

All these things relate to the positive potential outcomes associated with seeing a fish or a school of fish in the water while passing by in a boat. Conversely, some negative aspects associated with burning fish certainly exist.

Most of the downside to burning relates to the way boaters begin to behave once they see fish in the water a few times while driving around. Some anglers become essentially "addicted" to burning, and consequently, they spend lots of time running around in the shallows, looking for their next fix. In some cases, this need causes them to become less friendly toward other people during their regular forays. I have experienced many situations, especially with large redfish tournaments looming on the schedule, when numerous boats insist on driving around all day, zig-zagging through the shallows in search of fish they will attempt to target later.

I don't subscribe to a "smart fish mantra", and I don't really think a boat passing through an area has much of an influence over one's ability to catch fish, even in the short term. However, if dozens or scores of boats spend enough time carving a maze of bubble trails through an area, fish might certainly move away, in search of a quieter place, with less disturbance. Too much reliance on seeing fish in the water before targeting them inevitably leads some anglers to spend too much time running around in the shallows looking, instead of stopping the boat and fishing.

This particular aspect of burning deals with how "burn addicts" affect the fish and consequently the other anglers with whom they share the bays. On a different level, too strong a reliance on burning also carries a potentially negative consequence for those riding high on the towers for hours, day after day.

Once someone becomes overly accustomed to seeing their fish before attempting to catch them, they run the risk of dulling their angling skills over time. For one thing, seeing the fish before and while targeting them usually makes it easier to catch them. Though sight-casting does not always prove easy, it does provide opportunity for tweaking presentations with immediate feedback. Making repeated casts in front of fish and noting their reactions provides ripe opportunity for adjusting presentations to eventually cause the fish to strike.

An entirely different truth applies when fishing blindly. Without seeing the fish they target, anglers must rely on a more systematic approach to altering presentations. Those who don't become addicted to seeing everything they target become more likely to learn how to methodically adjust presentations to increase their consistency, compared to people who must first see a fish (or a bunch of fish) before even making a cast. At its core, the essence of fishing resides in the act of probing the water with some kind of "bait" in search of a fish, not in driving around looking into the water for a fish, then probing around in front of its nose in attempt to catch it.

Not only does burning fish potentially reduce an angler's presentation skills, it also affects their ability to make sound lure choices. Most anglers who show high rates of consistency when fishing blind show a high aptitude for picking the proper lure for the moment, in addition to a good understanding of how to effectively present the lure, given the vagaries of the situation. They also develop a sense of the appropriate amount of time to give a spot to produce, before moving elsewhere. All these specialized skills diminish when not practiced; those who insist on burning fish before casting have little chance of maintaining them.

Additionally, people who show little willingness to make an effort to catch fish without seeing them first eventually have no motivation to fish when the wind makes the water murky, or when other conditions make seeing into the water difficult. In the worst case scenario, burning fish causes anglers to shy away from places which don't regularly hold clear water, and/or to forgo the opportunity to fish on marginal days. Rather than go out and learn the skills necessary to catch fish on such days, they tend to stay home and do other things. Eventually, then, they don't develop their skills as fully as those who make the effort to fish in places and on days when burning fish isn't possible.

Some people have likely realized all this, and have made a conscious decision that they don't care about the negative aspects of burning. They like what they like, and do not wish to work on maintaining the high levels of skills which enhance productivity when fishing blind. For them, that's okay, but for people sincerely interested in improving and/or maintaining their skills in a general sense, falling in love with burning can lead to heartaches.

Too heavy a reliance on burning carries negative potential consequences for those participating in the activity, and for those attempting to fish areas where the "burn junkies" show up on a regular basis. In a perfect world, all anglers would recognize the potential benefits of hunting fish from the helm and make use of the technique in a responsible, ethical and limited manner, without becoming obsessive and overly committed to it as a basic way of operating.