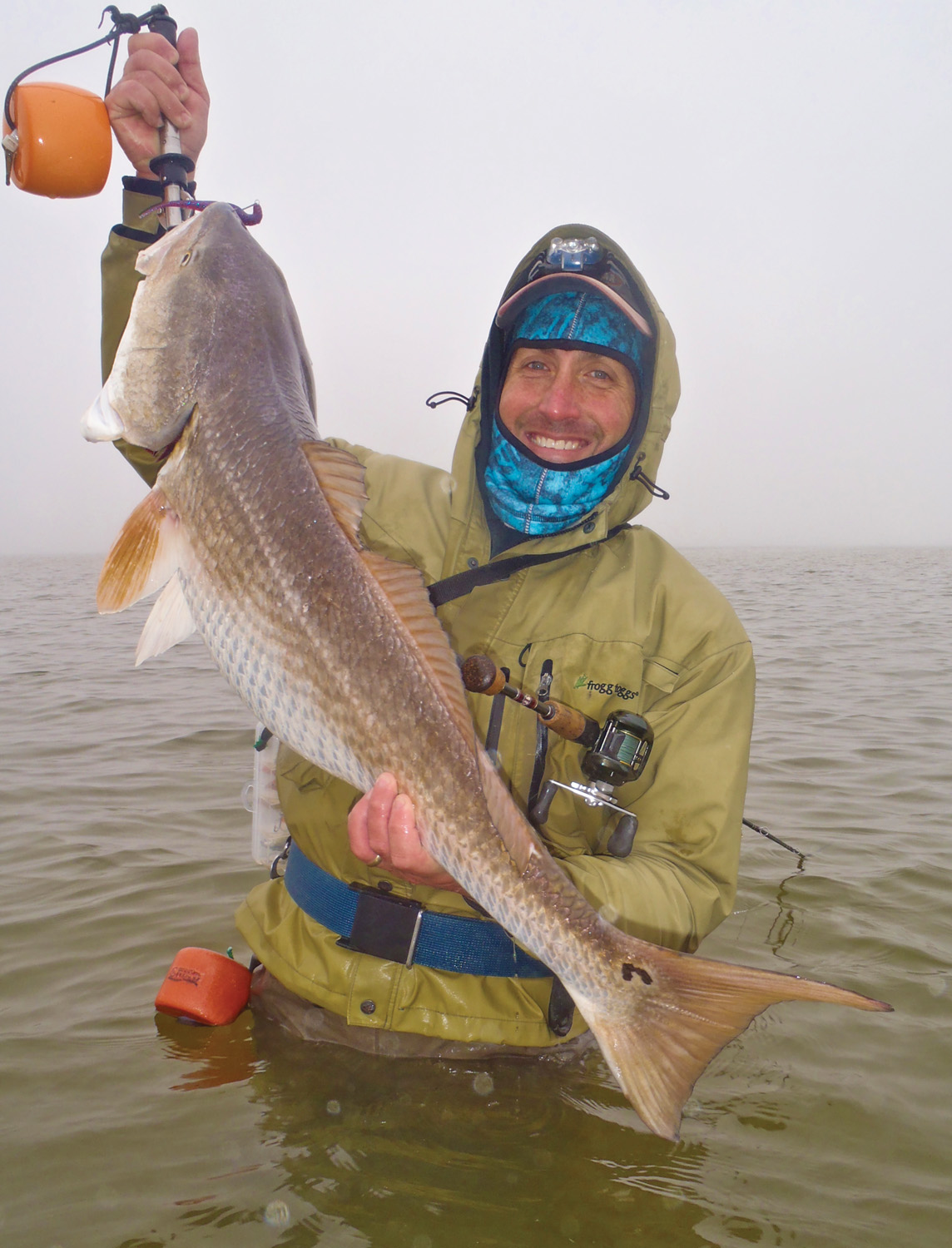 Over-sized redfish sometimes surprise trophy trout anglers who brave the elements to fish on the coldest days of the year. This bruiser battled Ari Schwartz bravely before losing. Ari rewarded the bronze bully by releasing it.

In the dead of winter, when Jack Frost's fingers rip the last brittle leaves off deciduous trees, some anglers clean and stow their fishing gear, to wait for warmer weather before venturing out again. Others perceive ripe opportunity in the frigid months, when chilled water temperatures force inshore species into predictable behavior patterns. Those who choose to make forays onto the bays this time of year should do so after preparing themselves carefully and making thoughtful plans.

Navigating across our coastal waterways in a center console boat presents inherent dangers and risks. Cold weather accentuates these negative aspects of the endeavor. To properly acknowledge and potentially cope with these perils, wise captains monitor and maintain their rigs thoroughly and carry all legally-required and optional safety equipment and devices, including signal flares and a fully-stocked first aid kit. These and other items should remain at the ready in all seasons, but in the coldest months, adding a cache of warm clothing and a stockpile of extra food and water to the list can provide necessary comfort and nourishment if and when accidents occur.

The safety of a situation can deteriorate rapidly when any angler gets wet, whether through contact with soaking winter rains or immersion in the bay waters. Wading anglers face the risk of stumbling and filling their waders, also the possibility of rips in the fabrics causing leaks. Boat-bound anglers can fall off the craft accidentally, and brisk winds can drive rainwater through the shields of most any protective clothing. In any of these cases, replacing wet clothes with dry ones can salvage a trip at the least, and stave off the deadly risks of hypothermia in worst-case scenarios.

Of course, properly dressing oneself to cope with the elements prior to launching the boat plays a critical role in preparedness on winter outings. One should layer clothing adequately, starting with thin, tight-fitting, moisture-resistant garments next to the skin, moving through thicker layers in the middle, and working up to water-shedding fabrics on the outside. Using a belt to cinch the waders tight around the waist will prevent water from penetrating them easily in an emergency, and wearing a waterproof jacket on the outside of the waders provides a buffer against the trickling effects of rogue waves which splash against an angler's back.

Wearing waders while riding in the boat from place to place does carry a risk. If thrown from the boat, an angler covered in such garb will potentially have a hard time treading water and staying afloat. For this reason, some people choose not to travel long distances in the boat wearing the gear. Other folks relish the warmth and comforts provided by waders during windy boat rides and don life jackets over them for added safety while moving around. In fact, wearing personal flotation devices while whizzing across the water always makes good sense, regardless of what other clothing one chooses to wear.

Colder weather makes all these issues more significant. Accordingly, in order to remain truly prepared, one should pay close attention to prevailing conditions and weather predictions before heading out onto the water this time of year. Like water temperatures, tides usually fall to low levels after the December solstice, exposing hazards for oblivious captains who don't monitor the situation closely. Using the weather forecast and tidal predictions to generate a safe float plan enhances the safety of all winter trips.

The same environmental elements additionally affect the decisions of where and how to fish.For instance, when cold fronts roar across the coast, leaving whistling north winds in their wakes, fishing along protected, leeward shorelines makes good sense, both from a safety standpoint and a productivity potential perspective. Cold-stunned fish tend to hunker down in areas with the warmest water available, which in most cases means spots lying close to deep holes and basins sheltered from the influence of the bitter winds. Like the fish, anglers benefit from spending ample time in the same kinds of places. In order to do so, they should consider which launching points and navigation paths will allow them to access these coordinates safely. Finding oneself on the windward side of a deep bay pummeled by the fists of post-front winds defies the rules of common sense.

Fishing through frontal passages can provide epic results in some cases, and savvy coastal anglers appreciate this fact. Wise ones also acknowledge the risks involved with braving such weather events, and position themselves to safely return to the dock once the ugly downturn in elements dictates such a move. These same anglers also recognize the need to make a basic choice while making a winter excursion—whether to wade or fish from the boat.Generally, pre-front conditions, onshore winds, warmer weather and higher tide levels favor wading, while post-front conditions, offshore winds, colder temperatures and lower tide levels favor fishing from the boat.

In some specific locations, cold conditions and low tides can create the perfect scenario for wading close to shallow structures lying adjacent to deep channels and basins near wind-buffering shorelines, so generalizations don't always apply, especially for anglers who choose to target trophy speckled trout. In addition to making a basic choice of how to fish before leaving the dock, an angler should clarify the specific goal of a winter outing, because fishing for small keeper trout and slot redfish this time of year often means fishing deeper water than fishing for trophy specks dictates.

Regardless of whether one chooses to fish for monster trout or limits of smaller trout and reds, a mindset centered on persistence and patience will increase the odds for success.Cold-blooded creatures feel the effects of harsh winter weather profoundly, feeding less frequently as a result. When they do eat, they sometimes gorge voraciously, snapping at whatever sources of food they can find, including members of their own species in some cases. These facts dictate more than a need for a patient mind-set in the anglers who target them; they also require a willingness to factor in impending changes in weather and other celestial events.

Smart anglers plan cold-weather outings to coincide with predictably high levels of activity in the fish they seek. Sometimes, this means fishing through a frontal passage, as mentioned above. It might also favor leaving the dock late in the morning and fishing through dusk and into the early hours of night, particularly when a strong incoming tide movement occurs in the gloaming. At other times, wise anglers arrive at their spots before dawn to take advantage of the enhanced potential created by a setting moon, especially those targeting trophy trout in ultra-clear waters.

Planning outings to coincide with events which generally elevate the likelihood of encountering actively feeding fish hedges the bet favorably, but does not eliminate the critical roles played by persistence and patience in improving productivity. For wading anglers, persistence often means planting one's feet and remaining relatively still in small places known to hold the kind(s) of fish targeted. Tinkering with lure choices and presentations within a narrow range of variability typically leads to a desired outcome. Maintaining a vigil to verify the presence of forage species plays a part in the plan. Normally, finding a few mullet in the area proves valuable in winter, especially on the coldest days, whether wading or fishing from the boat.

On the other hand, locating a cove or similar shallow area loaded with mullet can become important during warm spells between fronts. An angler wishing to wade areas of those types on a mild winter afternoon might first display persistence in the search for a concentration of the forage species, before stopping and getting out of the boat. Similarly, a boat-bound angler attempting to catch fish in an open basin during winter might devote ample time to a search for muddy streaks in the water before starting a drift and making the first cast.

Once a boating angler locates some fishy looking streaks, the focus of their effort likely shifts to identifying the subtle elements of lure choice and presentation which will produce bites, much the same way a wading angler would. In the case of a boating angler, this normally involves adjusting jighead size to keep a soft plastic in close proximity to the bottom and experimenting with the speed and intensity of the presentation.

Most of the time, lures moving slowly through the lower parts of the water column produce more strikes in winter than lures moving faster near the surface, particularly when fish become negative and stop feeding actively. Urging reaction strikes from finicky, cold fish requires super slow presentations. On the other hand, when warm spells occur during Jack Frost's months, trout and redfish can and will attack floating plugs with reckless abandon for short periods of time. Anglers who realize this remain ready to offer them what they want.

One common theme connects all these concepts—locating fish and earning strikes in winter can prove challenging. Folks who display patience in the right places and who make a persistent effort at subtly refining their strategies have the best chances for consistent success. In this basic way, fishing in winter resembles fishing in the other three seasons. But in the coldest months, when Mother Nature wags her finger most sternly, preparation, planning, persistence and patience play more dramatic roles than they do when the all-mighty matriarch displays a kinder, gentler mood.