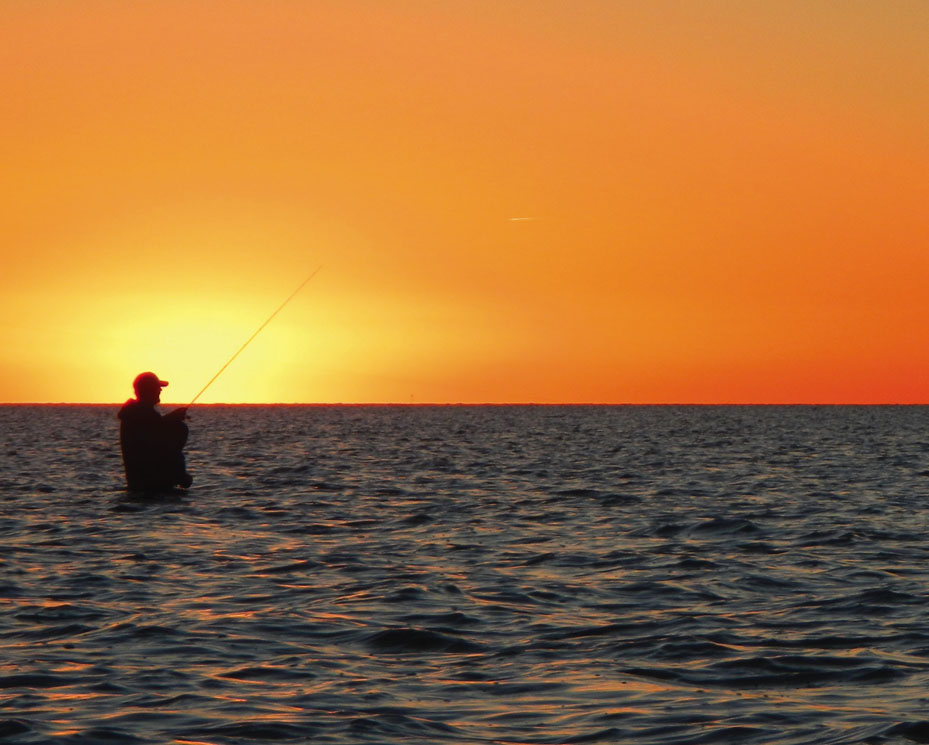 In a recent feature article, I identified and clarified a few absolutes which govern fishing for all species of fish, regardless of method(s). These indisputable concepts ring forever true. Other, general truths do not meet such a strict standard, but they prove reliable nonetheless, particularly as they relate to the sport of fishing for speckled trout with artificial lures. I base many of my daily decisions on the following useful generalizations.

Some of these ideas relate to when and where the fish tend to bite best, others relate to the types of presentations which best match particular climatic conditions, and one describes a behavior pattern common to the species. I base all of the following assertions on my long-term experiences and on my studies of the biology of the fish. Anglers who choose to fish exclusively with artificial lures search endlessly for ways to "hedge the bet", or up the odds of getting fish to bite. An awareness of these truths aids in the quest for consistency in catching.

I normally leave the dock in pre-dawn darkness, because I know the changing light condition associated with daybreak typically produces an enhanced opportunity to catch trout. If and when I choose to fish later hours, I normally make a point to fish through the sunset and into the first hour(s) of darkness. Changing light conditions create ripe opportunity for predatory fish; scientific studies have helped us understand why.

The eyes of all fish, like those of human beings, must adjust to changing light conditions. Fishes' eyes tend to adjust slower than the eyes of mammals. More significantly, the eyes of most species of fish which trout prey upon adjust slower than do those of the trout. Consequently, trout can see better than the fish they want to eat while the light emerges and/or dims. Instinctively, the predators take advantage of this by feeding regularly during the transitions from night to day and day to night.

Many experts assume dawn proves the better transitional time during the warmer half of the year, while dusk does so during colder weather months. I recognize the underlying premises related to such an assertion, but ample experience shows me trout bite well before, during and just after daybreak in winter too, even on some of the coldest days. The likelihood of trout feeding actively during a light change becomes accentuated if a rising or setting moon coincides with a rising or setting sun.

A moon hovering close to the horizon normally creates a better biting mood in the fish. I can not honestly say I have seen any credible, plausible scientific explanation for the previous statement, but my experiences (and that of many others) undeniably stamp it with a seal of truth. Additionally, a "bigger" moon (meaning either full or new) hanging close to the horizon tends to enhance the catching more than a quarter moon.

In fact, both full and new moons cause fish to feed more actively than weaker moons do, over the long haul. I have decades of data to back up such a belief. I think of the effect of a strong moon as being about a five day window, including the day of the new or full moon, and two days on either side of it.

Some experts don't like to fish on the days immediately following a full moon, citing long-term evidence in their fishing logs of a downturn in the catching during such a time-frame. Most of those anglers fish in areas strongly influenced by tidal movement, and they probably accurately recognize the negative effects of full-moon tides on fishing in their home areas. I fish in an area generally unaffected by tidal movements, and have documented many better than average catches on days following full moons.

While I won't dispute the fact that catching can slow for some people in some areas on days following full moons, I will take issue with the reason commonly given to explain the poor bite. Many anglers claim "the bright moon allows the trout to see and feed all night", so they aren't hungry during the day. Such a belief appears logical on the surface, but is actually counter to the truth, in my estimation.

Speckled trout feed actively at night, particularly the bigger specimens, who tend to prefer eating other fish rather than crustaceans or other forms of marine life. A fish which feeds nocturnally because darkness provides it a better chance of catching its prey would be more active in pitch black darkness, not under the wan light of a bright moon. Friends of mine who fish almost exclusively during dark hours verify this truth; almost all of the fastest action occurs when they can't see their own hands in front of their faces. Bright moonlight typically coincides with mediocre catching, possibly because the extra light makes it easier for prey species to locate the trout lurking in the area, hoping to catch them.

Regardless of the amount of light in the sky, another fact related to the behavior of trout comes into play for those of us seeking to catch them. Speckled trout tend to travel and concentrate in schools. Sometimes, fish of similar size gather in groups, while at other times, specimens of all sizes wind up in the same places. These truths affect the fishing in a profound way.

If a trout bites in a specific spot, a wise angler will throw back repeatedly into the spot and into the water close to the spot. Fish found in packs or pods tend to compete with each other for whatever food sources come into their midst; such competition makes them more susceptible to the efforts of anglers with plastic plugs. Solitary fish, on average, show a more finicky attitude, making them exceedingly difficult to catch much of the time. Savvy anglers share a tendency to pay attention to where bites occur, and to make multiple casts into the place if possible when they do, knowing they've likely located a group of fish, rather than a single one.

When targeting the fish, those same anglers use general truths related to lure choice when deciding what to throw. After all, the "wrong" lure tossed in front of a group of a trout will often go untouched, providing no clues to the angler at the other end of the line. Getting bites plays a key role in locating fish; anglers who recognize basic facts about the best times to use various lures get more bites.

Lures worked slowly and close to the bottom work better in cold water, while surface-running plugs worked faster and better in hot water. Calm conditions favor the use of slow, steady presentations, while windier conditions facilitate the effectiveness of fast, erratic presentations which include speed bursts and pauses. Consequently, soft plastics and slow -sinking twitch baits work best during the cold seasons, while topwaters and fast-moving twitch baits like broken-backs and other lipped crank baits work better when the weather is sizzling hot.

Obviously, these assertions do not always bear truth. Some of the best topwater sessions of all occur in winter, for instance, particularly during warm spells when winds blowing off the Gulf provide an enticing ripple on the water's surface and barometric pressure reads fairly low. On the other hand, soft plastics sometimes prove the most effective lures during the summer, particularly when clear skies coincide with stronger than normal winds. Picking the best lure and presentation for the moment proves more difficult than simply fishing soft plastics low and slow in cold weather and working topwaters erratically in hot weather, but these generalizations provide a solid basis or starting point for making these decisions over time.

Consistently productive anglers know how best to choose a lure having the proper attributes to match the needs of the time and how to work the lure in a manner consistent with the way the season, weather and water conditions influence the behavior of the fish. They usually place more emphasis on the size, type and movement patterns of the lure than on its color, because they recognize another truth related to lure fishing.

The type of lure chosen and the presentation deployed almost always supersede color in importance. A lure's hue plays the biggest role in water at either extremity of the clarity range, in ultra-clear water or excessively turbid water. Natural looking colors work best when the fish can easily see the lure, while lures bearing two strongly contrasting hues (one dark, one light) work best when fish struggle to see them.

Smart anglers catch speckled trout under bright azure skies and in the black of night, by adjusting their strategies to best match the moment. Recognizing the utility of several general truths helps them keep their rods consistently bent. Summing up these truths helps clarify and simplify their effects on our efforts.

When fishing for speckled trout with artificial lures, head out early and/or stay out late. Pick a good spot and commit to it while the moon hangs low in the sky. If the mercury stands short in the glass, toss lures which stay down deep, and work them low and slow. When temperatures rise, work high-riding lures quickly and erratically across the surface. When a trout bites a lure in a spot, toss back over there at least a few times. More often than not, a bite proves other fish swim nearby. If a hot bite dwindles, try changing presentation first, then the type of lure deployed; leave the obsession with colors to the artists.