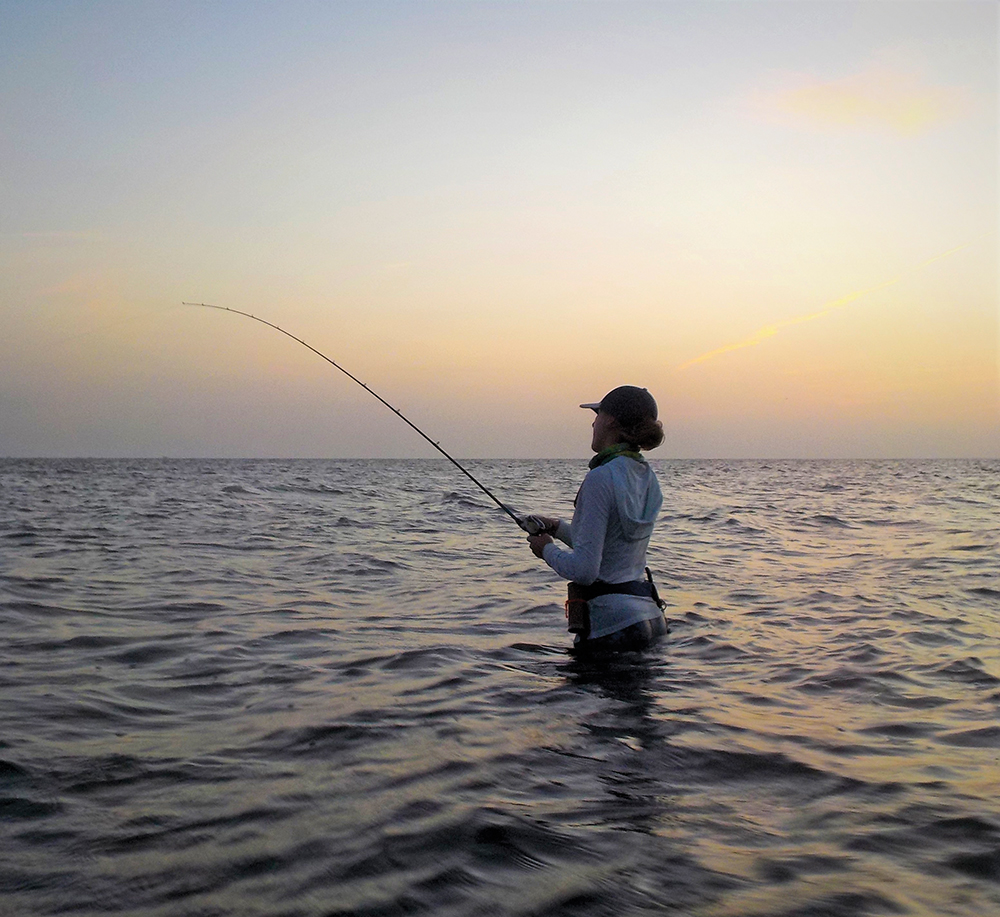 Summer mornings provide the perfect time to instill the love of coastal fishing in young anglers, like Caroline Shankle, who regularly catches dozens of trout when fishing with the captain.

As my daily operating procedures matured over years of running charters, I developed a tendency to retrace my steps and work through the same area twice on some outings. Like most other principles by which I operate, this habit developed organically, without much deliberation before its implementation. Now, I've contemplated the practice thoroughly and developed strong beliefs about it.

The choice to immediately repeat the path through an area or to return to a spot after leaving it on the same day can occur for multiple reasons. Several scenarios elevate the likely effectiveness of such a plan. In the simplest case, I choose to retrace the steps my customers and I made through an area, once we reach some kind of physical barrier which prohibits continued forward movement.

In some places, this happens when we make a slow trek across a flat, controlling our pace appropriately, then arrive at a depth contour, either a drop-off into deeper water or a shoreline shelf, perhaps even the shoreline itself. In such a scenario, if bite-frequency remained steady throughout the walk, circling back around immediately and proceeding through the area again makes perfect sense. If light winds prevail, this might mean turning and casting into the wind while moving back to the original starting point. Stronger winds generally dictate shuffling backwards and looping around in an arc, casting sideways.

Sometimes, reduced bite-frequency dictates returning to the site of the starting point of a wade, or to the point where bite frequency spiked. We sometimes realize we've likely walked to and through the fish we located, despite my efforts to prevent us from moving forward at a pace which would cause us to do so. In these situations, when we simply turn around and work through an area again immediately for a second time, the size of the place normally runs small.

If the original wade took us through a larger space, getting into the boat and circling back around makes better sense. Employing a Power Pole with a working remote having decent range greatly enhances one's ability to execute this strategy. Walking a distance away from the site of the last bite, then cranking up and idling well around the path of the wade improves the chances of using the motor to make such a move without spooking the targeted group of fish. In all these cases, the choice to go right back through an area makes sense because of the perceived stability of the situation, in terms of the feeding mood of the fish.

In a different scenario, the same choice might be made for the opposite reason. If we make a pass through an area without much luck, then an influential variable changes significantly in our favor, I sometimes choose to retrace the steps through the area a second time, without any lapse of time. I describe the pertinent variables as stimulators, meaning some weather or celestial event which increases the likelihood of improvement in the feeding mood of the fish.  In places where tide movements influence the bite profoundly, this might be a turn in the tide or the start of a tidal flow in either direction after a slack lull.

In hypersaline lagoons where I make most of my forays these days, the celestial event might be the rising or setting of the moon, or a predicted major feeding period when the moon stands high overhead or falls directly underfoot. In places where tides don't move much on a daily basis, such celestial events can generate feeding activity. As can weather events, like the onset of a medium-paced wind after a calm spell, the sudden reduction of a strong wind, or a shift in wind direction, especially when the shift proves favorable to other aspects of the effort to catch fish in a place.

I will make the choice to immediately pass through an area again after experiencing a low bite-frequency only if I originally came to the place knowing it recently held ample numbers of the right fish, and if signs indicate the fish likely remain present. This normally means I've caught plenty of bigger than average trout in the spot within the last couple of days or weeks, ideally more than once. If the sudden change creates a similar situation to a recent one in which we caught a bunch of fish, including several big ones, I'm more likely to make a second pass.

The above situations all involve the choice to work through an area twice without making a conscious decision to let it rest for a while. On many days when I choose to make two passes through an area, I do leave the place for some time before trying it the second time. Some of the reasons for letting a place cool off resemble those for circling around immediately, while others differ.

The most common factor causing me to leave a spot for a while involves a perceived negative trend in the feeding mood of the fish. If we've experienced a high bite-frequency while walking through an area, while a known stimulator influenced the situation, then the bite predictably wanes as the effect of the stimulator recedes, I often let the place rest before making a second trek through it. But not in every case.

Several factors can cause me to circle around immediately and make a second pass through a place, even when I know the fish we urged to bite on the first try have likely stopped feeding actively. Marginal weather conditions, which make moving around and spotting signs of feeding fish more difficult, and which can reduce the number of potentially productive spots, increase the chances I'll want to immediately retrace steps through an area, changing tactics like lure choice and presentation, in attempt to grind out a few more bites. This rings especially true if the first pass resulted in us catching one or more jumbo fish.

On the other hand, if better weather conditions prevail, and we catch numbers of fish without landing big ones, I'll more likely let a place rest once a hot bite fizzles. I explain this to my customers on a regular basis. “If we make a move, we'll probably find finicky fish in the new place, too. But we might as well give it a try, at least for a while.”

If we've been fishing shallow, I usually move somewhere and fish deeper, and vice versa. If we've been targeting fish in potholes surrounded by grass on a flat, I might make a move to a sand bar with rocks close by, or to an edge where a flat falls off into a muddy gut or open basin. In a place where tide movement plays a key role, I might move toward the tide source, hoping to encounter moving water, if the tide has fallen slack in the spot I'm leaving.

In all these cases, I try to find a site with some kind or kinds of different elements in play, compared to the first one. This increases my confidence in the idea of the fish in the new spot displaying a better feeding attitude. In a best-case scenario, we catch plenty of fish in one of the new places and perceive no need to return to the first one. On about fifteen or twenty per cent of the days I fish, we either catch fewer or no fish after making the move, and return to try the first spot again.

The imminent influence of a perceived stimulator often increases the likelihood of returning to a productive place after letting it rest for some length of time during the day.  For instance, if we experience a hot bite just after daybreak while the moon sets or rises, then leave the area looking for other fish, I often return to finish the day where I started, assuming the fish will bite during the mid-day major feeding period.

While doing so, I usually clarify my thought processes for my customers, saying something like, “We need to go back over there where we started this morning and fish this predicted major feed in the last place we caught fish, instead of some new one, not knowing whether it held fish a few hours ago.” The mantra makes the most sense when we experience a sluggish bite in all the places we try after leaving the first one.

This daily strategy resembles a more basic plan used by fishing guides and others who regularly make trips onto the bays. Our first decision often involves returning to the place where we last caught a decent number of the right fish, especially if prevailing conditions resemble those in play at the time in which the catching occurred. Weekend warriors face a more challenging dilemma, since they often embark on their journeys without recent positive experiences on which to base their decisions. They can, however, use the concepts described above to make reasonable choices about whether to make a second pass through an area on the same day.

Making productive choices of this type requires one to accurately assess the potential for catching on a given day, and at the present moment. In prime catching conditions, with strong stimulators and benign weather in play, working through an area a second time should only happen when an epic catch occurs on the first pass. In the toughest catching conditions, in the absence of strong stimulators and/or with nasty weather in play, one might choose to make a second pass through a place after earning only a few bites the first time. Most situations fall somewhere between the two extremes, elevating the need for good judgment on the part of the captain deciding whether or not to retrace steps.