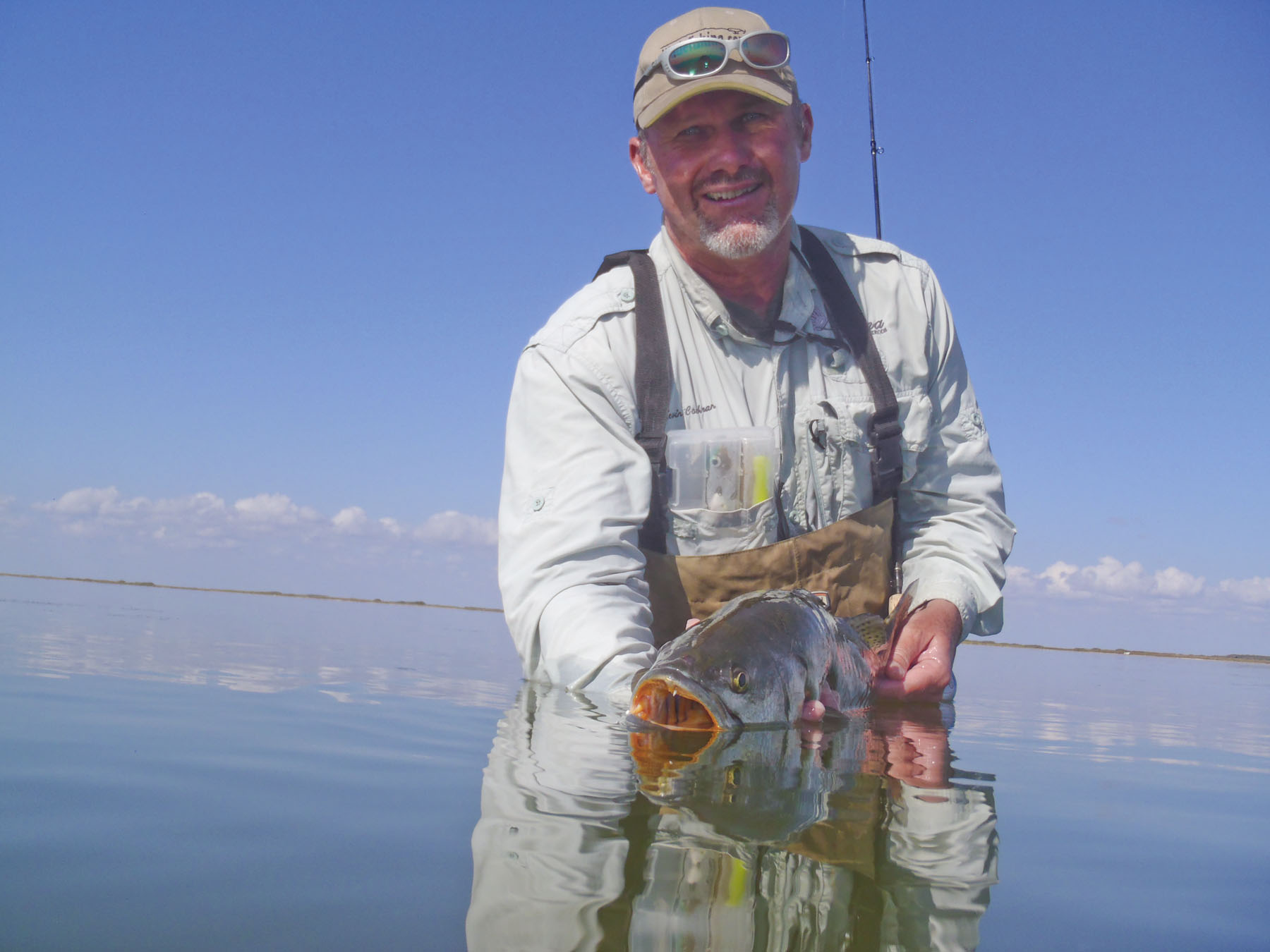 People are willing to make interstate journeys on a quest for long, fat trout like this one.
Author's note: This is not a true and accurate account of real events. The details have been exaggerated and changed to protect the guilty! I offer this piece for a satirical and humorous purpose, and request that readers accept it in the context for which it is intended.

I didn't hesitate to book the two days after he phoned from another state and we thoroughly discussed the way I do things. From our conversation, I deduced the caller liked wading and lure fishing and was truly motivated to catch a monster trout. He understood we would not be making a meat haul.

I directed him to go over all the relevant details with his one traveling companion. After assuring me he would, he said they'd both bring along suitable tackle. "Might need to borrow some Corkys, though," he warned. "Can't get those around here." (This was before MirrOlure made Paul Brown's lures widely available).

The night they arrived, we had another discussion about their tackle. Again, he stated his confidence in their equipment. "Don't worry; we fish all the time. You just show us where they are and what color we need to throw at 'em, and we'll catch 'em."

When I picked them up the first morning, they saw the Longhorns logo on my burnt orange boat bag, and we wound up talking about college sports for a while. I learned they were alumni of a school which had recently beaten my beloved 'Horns in a major sporting event. I resolved to put my negative feelings about that aside; this was a fishing trip, not a college rivalry.

As the Power Pole spiked the mud and steadied the boat at the day's first spot, the new morning sun illuminated us and our gear. Both had brought two rods and reels, per my instructions. One possessed a pair of fat fiberglass sticks over eight feet long, which carried bait casting reels better suited for king mackerel than speckled trout; the other's ultra light spinning outfits were spooled with six pound test monofilament.

Since I'd been twice told they had the proper gear, I hadn't brought any loaner tackle along, but I didn't say anything to discourage them when we started fishing. I tossed them some Corkys, picking colors I felt would work under the gray skies, and gave them a demonstration of how I like to work the lures.

The first trout I caught weighed over eight pounds. Given the recent results I'd had at the spot, the catch wasn't unexpected at all. Within the next hour, I caught a couple more four pound specks, but my customers had not a bite.

I could tell they would likely struggle to make productive presentations with their equipment. The one with the bulky sticks was already tiring and shaking his wrist, and though the other shook his buggy-whip rods vigorously, he wasn't getting much payoff in terms of action in the lure. Maybe, I thought, if I keep catching fish and showing them what's here, they'll get lucky.

Eventually, they decided the problem was the color of their Corkys and requested a change, so I made sure they had the same color I did, giving one the exact lure I'd been using. Their frustration began to mount as I continued to catch fish on a different color while they made more empty casts. I told them it was about presentation, not color, and made several new attempts to help them improve their techniques. I also instructed them to crowd me and cast exactly where I did, all to no avail.

Truth be told, I had a hard time getting bites that day too, though I did manage to catch ten trout on fourteen bites, moving around to three or four other spots in search of something easy. The total weight of my limit was forty three pounds. The total weight of the fish caught by my clients was about ten ounces. After an hour-long nap, the companion managed to catch one dink trout, which put quite a sharp bend in his noodle rod.

The smell of the skunk was the bad news; the fact that I had loaner rods which I could bring along on day two was the good news. As we parted ways, I tried to keep the boys in a positive frame of mind, telling them things would be different, suggesting they'd be amazed at the effectiveness of my Laguna rods.

The next day, while still waking up to my morning coffee, I heard the companion client say, "We went out to eat last night and talked to some people from San Antonio. They caught a bunch of trout yesterday, some pretty nice ones too."

"Doesn't surprise me," I said. "I caught a limit, remember."

He continued, and I nearly choked on a bite of my breakfast burrito when I realized what he was insinuating. "They said they caught 'em on soft plastics, somewhere way in the back of Baffin Bay." He was actually suggesting I change my plan to chase after a fishing report gained at a local restaurant! "Are we going back to the same spot?" he asked pointedly.

"Yessir," I replied, clearing my throat. "I caught an eight pounder, and I've caught a bunch of other big ones there recently too. I should never have moved yesterday. Look," I continued, "y'all said you wanted to try for a wallhanger. If you're bored with that or your priority has changed, I'll take you numbers fishing. Is that what you want?"

"No, no, no. We want a big fish," the other, more motivated man interrupted. "Do what you think you need to do. Don't give up on the big fish plan."

Biting my tongue and reminding myself that the guide business is more about people than fish, I restated my confidence that the change to my Laguna rods would help them tremendously. And it did. All three of us began catching trout almost immediately once we got to the spot. I gave each one a Fat Boy in the colors of their college team and smiled, saying, "These ought to work for y'all!"

The early bite was better than on the previous day, but the fish weren't quite as big. We managed about twenty five trout between the three of us by eleven o'clock, but the heaviest weighed only about four pounds. Heading to the boat to take a break, we talked about how much easier it had been for them to catch fish on rods with the appropriate weight, flex and feel.

Then the main customer snipped the Fat Boy with his school colors off his line and announced he wanted something else. Puzzled, I asked, "Wait, you just caught fish after not getting a bite all day yesterday, yet you want to change?"

"I didn't catch as many as you did," he asserted.

Without uttering a word, I bit my lure off the leader, tied it on his line and put the one he'd rejected on mine.

"I think Texas trout are scared of that color," he chuckled.

When we started fishing again, we all continued catching until the napper gave up early and sat in the boat for the last two hours or so. I and the alert client moved to a different part of the area, where I found some bigger trout.

Though I tried to fight the urge and reminded myself this was not a college sporting event, I became fanatically motivated to take revenge on my rival. Fishing only a few yards from him, I caught two six pounders at the beginning of the final hour. He caught some similar fish too, and admitted one was his biggest trout ever, but his frustration over the fact he hadn't landed one of our Lone Star Legends was clearly building.

Staying close, I coached him on where to cast and how to wiggle his rod. I swear I heard cheers from the shore after I stuck a fat twenty eight standing on his right. Politely, I walked around him so he could cast where I had been. The band played our fight song in my mind while I landed a twenty nine to his left and we switched places again.

My last fish of the day stretched to thirty inches and pulled the Boga to nine on the nose; Bevo snorted when the Texas Cowboys fired Smokey the Cannon. After taking a few pictures and watching the old trout slip away, I dangled the bent, battered and fuzzy lure in front of him. "Thought they were scared of this one," I grinned.

He stammered, "They were.a little while ago."

I went to get the boat, telling him not to give up, "You can still get the job done." In the end, he did not.

It was all my fault. I should have done what the alumni from the hated school in a distant state wanted and searched all over the back of Baffin trying to figure out where the guys from San Antonio whacked 'em. I'm sure I'd have a better idea of where to go and what to throw if I'd spend more time talking to strangers at restaurants!