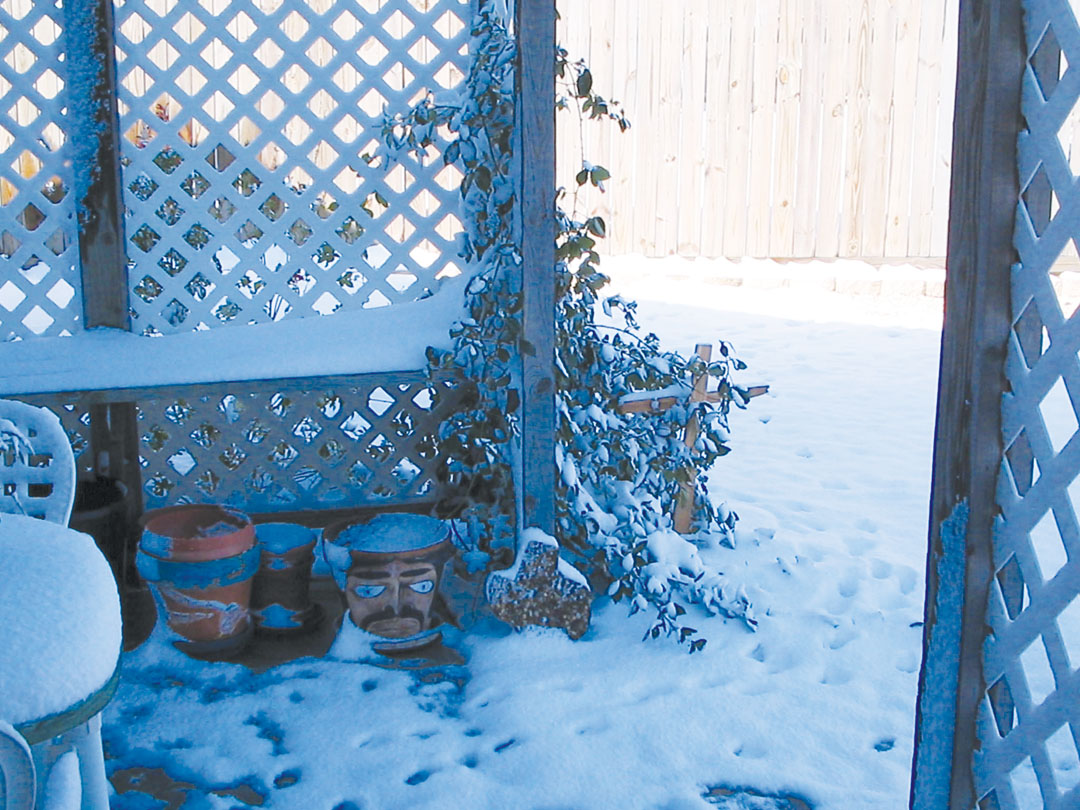 The stable weather patterns of summer make the choices of where and how to fish relatively easy for Texas trout anglers. Winds are pretty predictable in strength and direction, temperatures stay high and the barometer typically moves up and down over a short range, except when altered by transient tropical systems. Conversely, winter weather changes rapidly, with wind speeds ranging from nil to gale force, barometric levels dropping drastically then ballooning behind fronts and temperatures varying widely, sometimes on a daily basis.

During the coldest snaps of the season, trout pile into the deepest holes in a bay system and hug the bottom; those same fish might emerge on super skinny flats to warm up a short time later. In the cold months, consistently productive trout anglers, particularly trophy hunters, are those who best adjust to the rapidly changing conditions.

It takes no genius to figure out that a frontal passage creates a radical wind shift. The passage of a front also ushers in a dome of heavy air, which causes a rise in barometric pressure. The air is heavy because it's cold; temperatures behind the front drop, then turn and rise again as the next front approaches. It's a cycle, or circle of change, and the feeding attitude of the fish often predictably relates closely to that curve.

Of course, the feeding attitude of the fish will affect lure choices and presentation styles. Winter trophies can and will be caught on a variety of lures, but given the meteorological extremes, some lures will be virtually useless some of the time. Even within the span of one day, the optimal lure for the moment can run the spectrum from minnow-sized soft plastics to topwaters as big as a mullet.

The rapid changes in winter weather call for variable strategies in location as well as in lure choices. Normally, when a front approaches, temperatures are warmer than normal, and winds are out of the southeast, blowing at moderate speeds. In this pre-front situation, windward shorelines or structural elements often hold fish. Pre-front fish are generally relatively mobile and aggressive in the warmth, particularly if tide levels are high and the barometer is falling.

Rattling Corkys or other twitch baits fished moderately fast, with lots of starting, stopping and erratic movements, fit nicely onto the menus of mobile trout. Pre-front efforts are normally best focused relatively shallow, from about eighteen inches to maybe three feet. Bait observed schooling on the surface or jumping can dictate a move up to floating plugs, primarily large, noisy ones like Super Spooks, X Raps, Skitter Walks and Top Dogs, all of which work well to attract trout roving among windswept waves prior to a front.

One of the best times to catch magnum trout in winter is in the few hours immediately before, during and after the passage of a front. The wind shift offers a prime window of opportunity for making the biggest trout in the bay blow up on full-sized topwaters. Since arriving fronts often bring strong north and northwest winds that stir up waters already churned by moderate pre-front breezes, loud plugs and erratic presentations make sense during this period of peak activity. Moving at a steady pace to cover water within prime general areas is a proven strategy as the wind makes its switch, perhaps allowing for contact with more of the hyped-up, hunting fish.

After the post-front gale settles in, snapping and rifling the flags for a couple of hours, the feeding attitude of the fish will become poor and bites will become few and far between. The severity and duration of the dead period after a front passes will depend on how long the strong winds persist, how far temperatures fall and how high the barometer rises.

When fishing the dead period, it pays to assume the fish will be exceedingly hard to catch. Such fishing should be done in a spot which is somewhat or entirely protected from harsh post-front winds, ideally in an area close to deep water which has ample muddy and/or grassy flats for the fish to use when the warm up comes.

The lures of choice will almost always be soft plastics, and extreme presentation styles will be preferred, either crawling the worm on a sixteenth ounce jighead slowly across the bottom, or suspending it under a cork. Windier conditions favor the use of the cork and jig, and if the water's nasty in color, larger worms in extremely bright or dark colors and with rattles inserted in them work best.

As a side note, that color variation scheme is one which comes up often in winter, when skies rapidly range from utterly clear and bright to dismal and dark. Bright skies cry out for either natural or bright lures, depending on the water clarity, while dark skies, especially if they persist for days, necessitate the use of dark lures.

Whether the sky is clear or cloudy, a turning point will occur at the end of the shut-down of the trout bite associated with post-frontal weather. Often, the biggest trout of the winter are caught while the weather rounds the corner after the shut-down. Typically, such fish are found in water less than thirty inches deep, feeding voraciously in response to the upturn in the weather. These fish might be reticent to take conventional topwaters, but they're usually ready to attack rattling or floating Corkys, depending on the depth at which they're found.

If the turnaround is subtle after a strong front, meaning water and air temperatures are rising slowly and the sky is cloudy, rattling twitch baits slung across waist-deep flats near a drop off to deep open water work best. If the front was milder, or if the sky is bright and the turnaround is dramatic, meaning the flats are warming quickly, floating Corkys fished farther from the edge will be the preferred tools.

As the post-front winds diminish further and stall entirely, a stretch of blue-bird weather often occurs. Such "chamber of commerce" conditions are a potentially annoying winter extreme; the dead-calm lull can make fish (including trophy trout) difficult or nearly impossible to catch. Strategies for coping with the calm are diametrically opposed to the ones used to take advantage of the arrival of the front.

When the heavy hand of high barometric pressure drops the tide and flattens the waves, the two extreme soft plastic techniques mentioned earlier can become most useful. Dragging and short-hopping a worm on a light jighead over the bottom will usually outperform the cork and jig when it's slick calm; if used, the cork and jig should be worked slowly, deliberately and without as much vigor as it would be in the windier period associated with a settling-in front.

Thorough coverage of micro-spots with silent lures worked at a snail's pace can also be a useful strategy in the quiet time along the bottom of the curve. Floating Corkys, silent topwaters and soft plastics rigged weightless sometimes trigger strikes from ultra-finicky fish.

Eventually, the calm will give way to onshore winds and the tactics will change in response to those winds and the warmth they usher in. The use of lures and techniques which assume a more aggressive mood in the fish will work better again. Depending on where the bottom-out occurred, that might mean a switch from dragging a worm up to a floating Corky, or a shift from floating Corkys to rattling Corkys; potentially, the pre-front breezes bring back the need for a move all the way up to full-sized topwaters.

Successfully plugging for trophy trout in winter involves constant analysis of the conditions and subsequent perceptive adjustments in location, lures and presentations. Trophy specks respond to frontal passages by moving in predictable patterns, and their willingness or need to feed shifts like the winter winds. Pluggers who locate and catch them most consistently employ evolving strategies which properly acknowledge the effects of winter's circle of change.