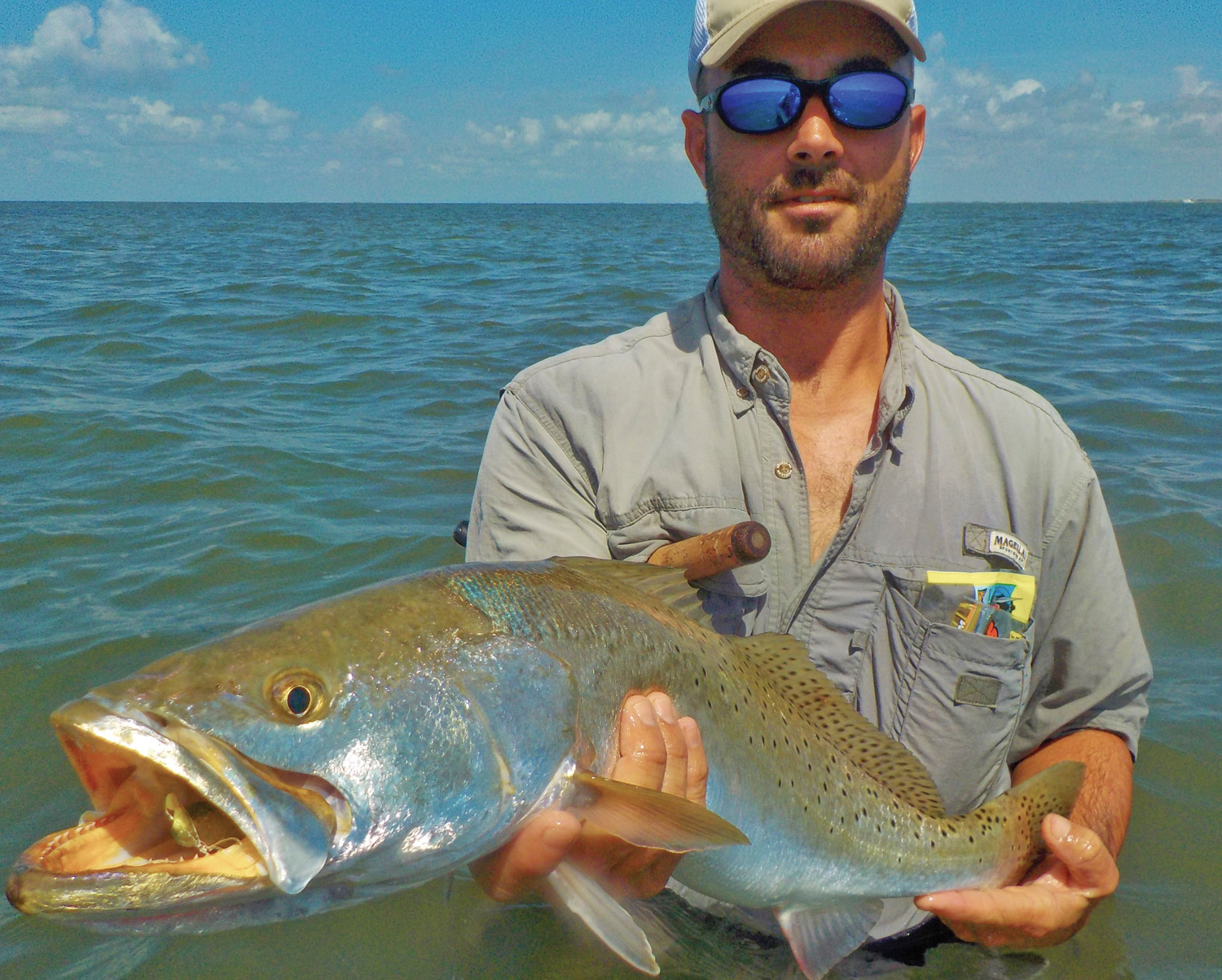 Drawing accurate conclusions becomes easier as the sample-size of studied data increases.This truth applies to scientific endeavors of all kinds. While saltwater fishing does not fit the description of a scientific process, the tenet can affect anglers' abilities to draw accurate conclusions about their activities. The impact of sample-size carries more significance in some aspects of the endeavor than others.

In a broad sense, anglers' predictions about the weights of the fish they catch reveal the flaws associated with making claims based on scant amounts of data. I'll walk out on a sturdy limb and defend the truth of this basic statement: when people estimate the weights of fish, they usually exaggerate the dimensions. Even when trying to keep things real, not stretching the truth to enhance the effects of a fishing story, most people struggle to accurately assess the weight of a specimen. The average person's inability to closely predict the weights of fish diminishes in inverse proportion to the size of the fish.

Most people have a better chance of correctly estimating the weights of smaller fish than larger ones. Sample-size undoubtedly affects this ability. All of us see more little fish than big ones. Consequently, we see more small fish weighed accurately, so we develop a better sense of what a specimen of a modest length likely weighs. The longer the fish, the fewer we see; the lack of volume in sample-size reduces the reliability of our predictive ability.

I have plenty of personal experience testing these ideas. Over the years, I've weighed hundreds of speckled trout on a Boga Grip before their release, to document their weights, so I could post the numbers online with pictures of the fish. I also spent several years participating in tournaments, watching fish slide onto digital scales at the events. Unlike the average weekend angler, I've personally seen plenty of “big” trout weighed accurately.

This causes me to question the estimates of people with less experience. I've had disputes with customers and friends over the issue. “We caught two nines over there last week,” I remember one saying. When I questioned the guesstimated weights, he defended them by saying, “They were both twenty-nine inches, so they had to weigh at least nine.” I pointed to my catalog of statistics as a way of pushing back.

“I've weighed scores of twenty-nine-inch trout. A few did weigh nine pounds or more. Most did not. The average weight of a twenty-nine-incher falls just under eight pounds, in my data base. If the fish reaches 29.5 inches or longer, the average weight will jump up to the eight-pound mark, on average.” In the specific case to which I'm referring, the customer didn't accept my argument until he went out and purchased a Boga Grip and began using it regularly. Then, not surprisingly, he began trusting the measurements rendered by a carefully calibrated tool over his flawed flights of fancy.

In his defense, he'd spent much of his time fishing the Upper Coast before making the statements about the specimens referenced in the example above. Of course, he had not caught many twenty-nine-inch trout in Galveston, but he had seen a few weighed accurately, and those did weigh nine pounds or more. “A twenty-nine on the Upper Coast will weigh nine pounds, period,” he asserted, confidently. I know this isn't the case, but I will concede a general truth related to his claim.

In Texas, on average, Upper Coast trout weigh slightly more pounds-per-inch than Lower Coast specimens. I say this after watching many fish weighed in different regions, and after listening to anecdotes told by fishing guides in all areas of the state for more than two decades. The disparate relationship of length to weight across the state likely results from the richer, more diverse food sources available to trout living in riverine estuaries in the north, compared with the less-diverse, nutrient-challenged, hypersaline lagoons down south.

I can't defend the previous statement with scientific evidence, but it does seem like a reasonable conclusion, based on an ample data sample. Contrast the concept with what happens to anglers pre-fishing for tournaments, within a given estuary. Folks who catch a handful of trout or redfish in one part of a bay system and compare them to a similar number caught elsewhere sometimes make the following assertion: “The fish over there are fatter than the ones over here.” I'll concede it's possible for fish in one part of an estuary to temporarily carry a higher average weight-per-inch compared to those in another part, in response to the presence of some kind of forage species, or the abundance of available food, but I'll also assert a more likely cause for the apparent disparity. The anglers drawing the conclusion don't have enough evidence.

A sample size of ten or twenty (likely even fifty) fish will not provide an accurate sense of a discrepancy in length/size relationship of fish within a given body of water. Whether contemplating the size of fish or the likely ease of catching them, anglers basing their decisions on scant amounts of evidence run the risk of making flawed choices. Perhaps of paramount importance, accurately assessing the likelihood of catching fish in a specific place becomes easier in direct proportion to the number of times one visits the site.

More visits to a place reveal more aspects of its potential productivity. Ideally, one gathers evidence after testing the site dozens or hundreds of times, in various types of conditions, before jumping to conclusions about its consistency of production. Some spots produce well with a specific set of environmental variables in play; without those variables present, they don't produce much at all. The variables might include tide movement, tide level, wind speed and direction, water temperature and/or turbidity level, or some combination of these.

Take turbidity and its effect on the catching in a specific place as an example. On the muddy flats lying adjacent to the Intracoastal Waterway in East Matagorda Bay, southerly winds of even moderate speeds quickly turn the water ugly. Anglers in the know still manage to catch trout around shell humps in the area, particularly on noisy topwaters in the warmer half of the year. The best bite in nasty water on these spoil banks occurs when strong tide movement stirs up an active bite, or when a passing barge creates man-made current during slack tides.

Anglers inexperienced with the specifics related to these issues, who visit the area once or twice prior to a tournament and catch a few quality trout in water looking like Yoo-hoo might certainly make a poor decision and wind up holding a skunk during the day of the event, particularly if they choose to continue chunking a floating plug all day at the fish, waiting for a repeat of earlier events. A speckled trout's willingness to strike at a topwater changes significantly from moment to moment and day to day, regardless of water clarity.

This fact causes some people to make a basic mistake when fishing brown tide-tainted waters where I live and work. “I don't know what y'all are complaining about. The water in Galveston always looks like this,” I've heard some say when they see water containing high levels of brown algae. “Just pull out a She Dog or Skitter Walk and rattle 'em up.” Sounds good on paper, right? When targeting trout in dirty water, toss a noisy plug into their midst, one they can locate easily, and your problem disappears like morning mist. Such a naive assertion refuses to acknowledge the basic truth about the inconsistent willingness of a trout to strike at the surface. Dirty water does not change this.

Sure, catching aggressive, actively feeding trout in stained waters on floating plugs happens easily some of the time. But anglers who assume trout will always strike at rattling plugs snapped around on the surface of mucky water will walk away disappointed on many other occasions, especially if their efforts occur in cold water. Generally, speckled trout show a low inclination to rise and strike plugs on the surface when water temperatures dip much below sixty degrees. Yes, I've seen them strike on top in colder water, even water measured at forty-something degrees. But I've also seen many people try and fail to earn blow-ups in waters of those temperatures, while others caught plenty of fish on sub-surface lures. After thousands of days' experience, I don't doubt the veracity of my conclusion. People who catch trout on top in frigid water a few times and become stubbornly committed to doing so on a regular basis set themselves up for consistent disappointment.

Active fish swimming in water which recently warmed up to forty-eight degrees show a much higher propensity to rise and strike than ones swimming in water of the same temperature which recently chilled from temperatures above sixty. I make this claim after gathering and analyzing copious amounts of data. More data, when viewed through the lens of intelligent analysis, leads to more accurate conclusions, whether related to the size of a specimen, the likelihood of catching fish in a particular place, or the potential efficacy of a specific lure/presentation in a given situation.

Of course, in order to provide maximum benefits, data must be accurate. The old saying rings clear here—garbage in equals garbage out. No matter how high it reaches, a pile of sloppy data won't morph into a mountain of sound conclusions, either in the arena of science, or in the realm of the angling arts.